Trip Type: Paddling Canoe
Entry Date: 09/03/2020
Entry & Exit Point: Sawbill Lake (EP 38)
Number of Days: 5
Group Size: 4
Discuss Trip: View Discussion Thread (6 messages)
Day 2 of 5
Friday, September 04, 2020 The cold front that blew in Thursday had passed and we awoke to a much quieter world. Instead of the low roar of wind through spruce, fir and pine, the warm water and cold air had combined to bathe the site in light fog, moisturizing everything lightly. That first morning breakfast of bacon and eggs and steaming coffee tasted much better than the same thing at home. We discussed the goal for the day. My sons-in-law advocated to make it clear to Cherokee. I didn't have the heart to tell them that my old body did not want to go that far, plus I remembered the Sitka Lake portgage into Cherokee and just how much fun that was even 50 years ago. So we settled on the goal of Weird Lake and hoped the single campsite would be open. The sun shown beautifully as the breeze built up again from the northwest. A pair of loons, without musical fanfare came within just a few feet of the lead canoe as we left the camp. 230 rods for our first longer portage into Kelly seemed even longer. Kelly was a nice change, As the breezes swirled over the hills and trees, we made great time. Took the 65 rod portage into Jack and immediately came upon our first beaver dam. I had forgotten how easy crossing them had been 50 years ago with old, heavy aluminum craft, but with the new lightweight canoes without ribs for support...well, more unloading and reloading. The passage through Jack was accompanied by a bald eagle (uncommon half a century ago) and a cow moose and yearling calf calmly watched us pass and then ambled to shore as we cruised through the last wide bay of Jack. The short 12 rod portage found us by the Temperance River's early fall flow through the rocks between lake...always good to hear the symphony of water over rock. Another beaver dam immediately faced us...but with some clever maneuvering and additional unloading and reloading we discovered the campsite just a few yards above. On the map it appeared to be on the west side of the lake, but it was on the opposite point. The fireplace was in the wide open area, but as the afternoon faded, so did the wind. Despite a lidless latrine and a somewhat divided campsite, we settled in for our second evening. I am a restless sleeper when it comes to sleeping on the ground in a narrow mummy bag…but the benefits were soon to be gained. The distinct and familiar loon laughter and cries slowly faded and in the middle of the night I awoke to a sound that had been very unlikely to have been heard here in 1970. Three, then four, possibly more timber wolves joined the chorus to the waning moon. What an incredibly haunting sound, a song of a lonely place, yet so very, very wild and so very, very much a message of “welcome to our world.” It made the trip, so far. 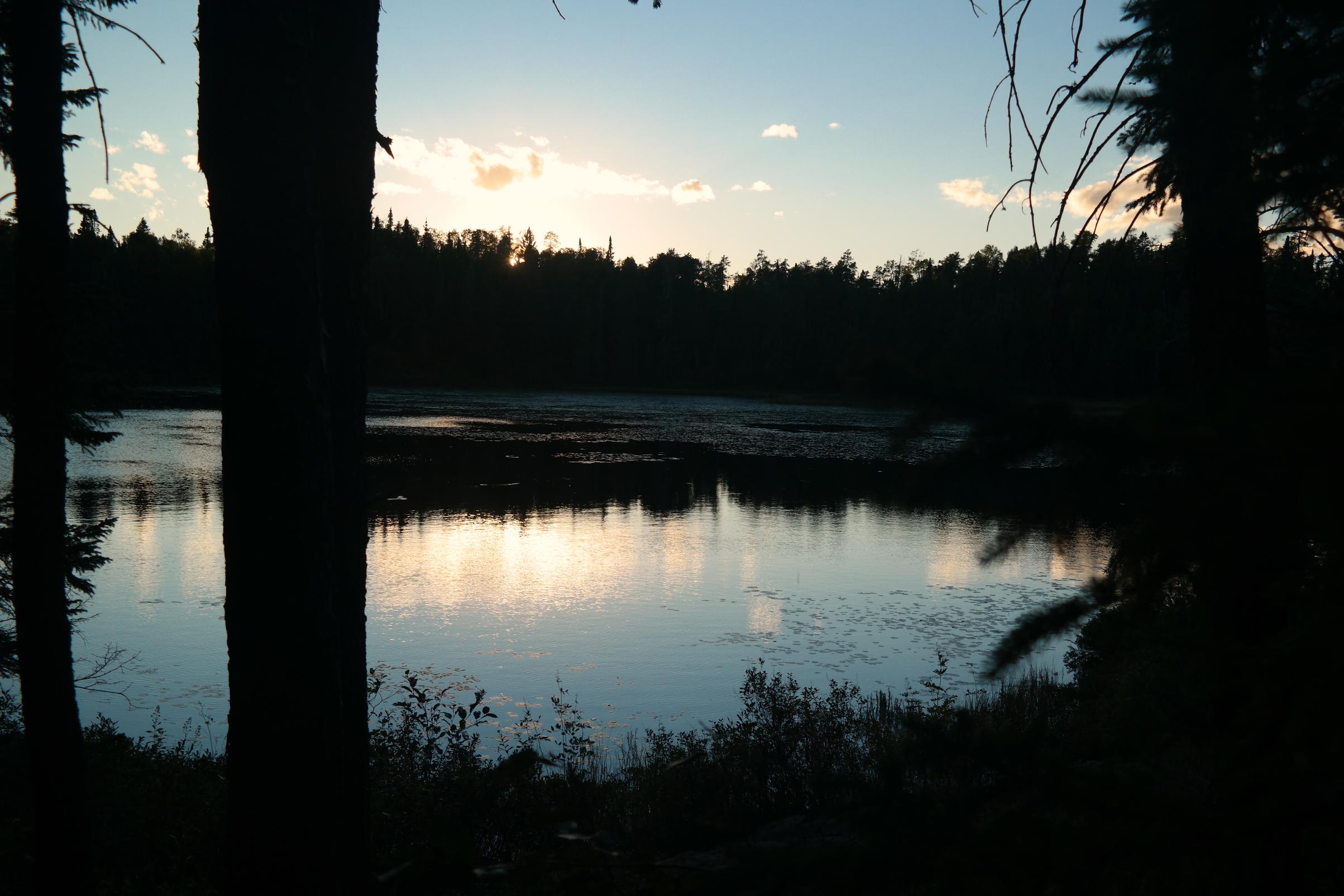