Trout in the Time of Covid
by PatrickE

Departure day. I envy paddlers who start their story with “I made the two to three hour drive up to Ely”. Orlando, FL would make for quite the drive (approximately 26 hours straight). We each decided to fly into Duluth this year to shorten the post flight car ride. A two hour car ride from Duluth didn’t sound too bad. I woke up at 4 am with the typical pretrip jitters. What could I forget? It’s always the simple stuff you assumed you couldn’t possibly forget. I stared at my bags and went through the Excel pack list again and again. I was as ready as I could be. At fifty pounds apiece, the two checked bags were at their limit (for the airline anyway). 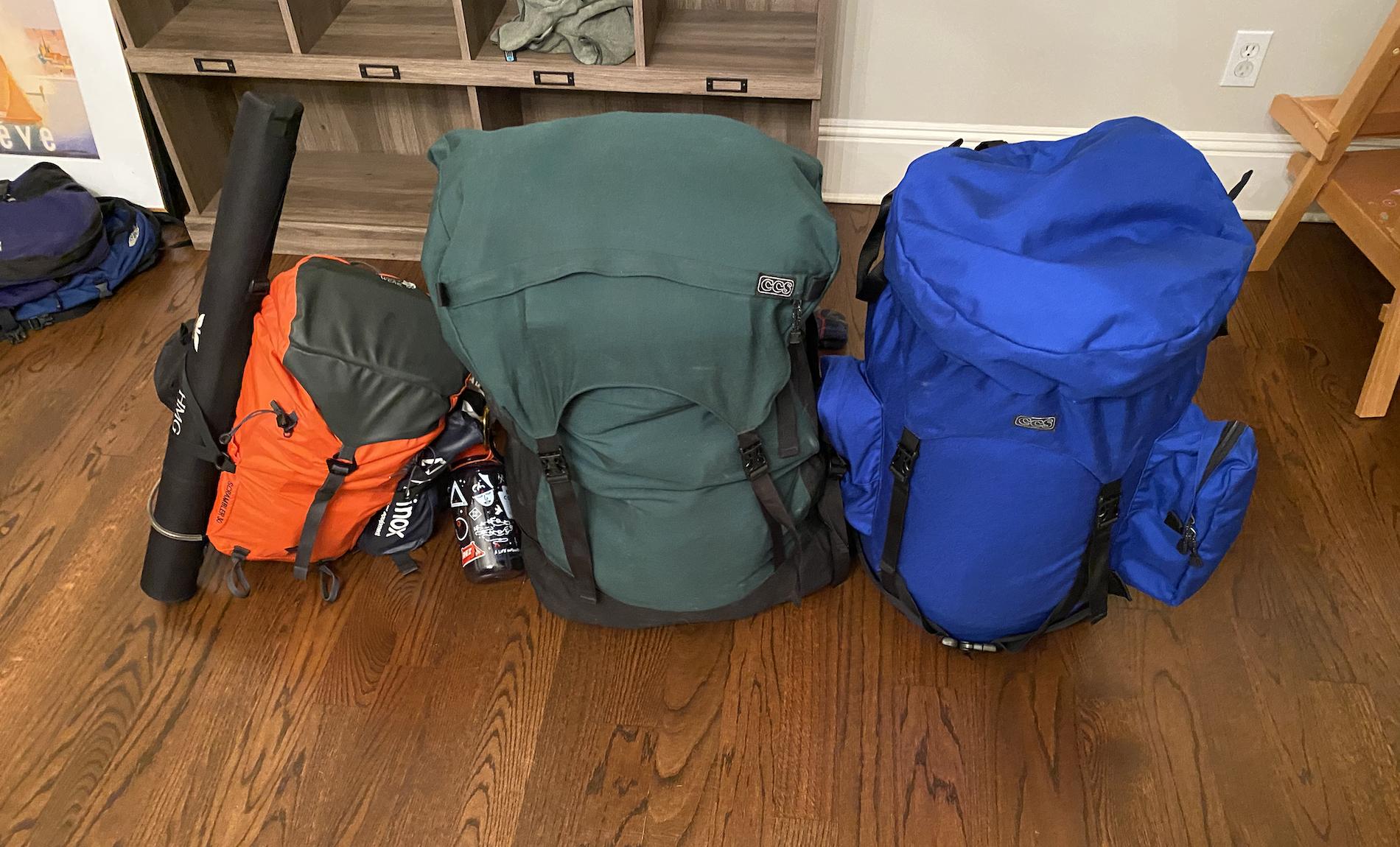 It was tough making some final cuts, but with a fire ban in place and record heat wave, I decided the axe and saw weren’t going to see a lot of use. A heavy fleece went back into the closet. Many of the food items got pushed aside with the plan to purchase them again once we landed in Duluth.

Grant, Davis, and I were converging from Austin, Atlanta, and Orlando respectively. The Orlando airport was an eerie sight. There were virtually no security lines and absolutely no wait anywhere I went. Gate after gate sat empty. What few people I did see all had masks on. It did make me feel better about flying. 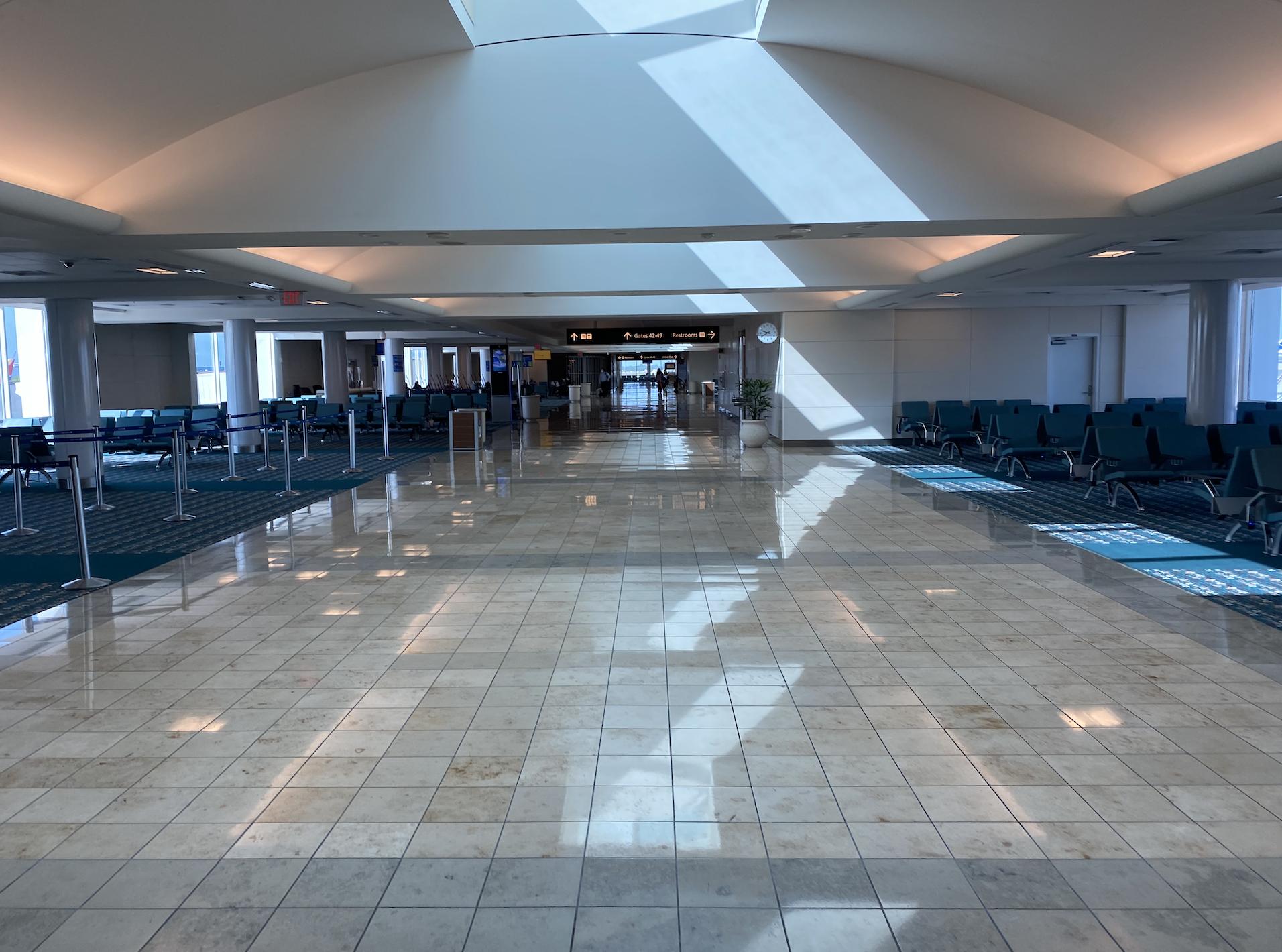 After meeting up with the rest of the crew in Chicago, we pulled up a map over beers and debated certain routes and tried to get a feel for what type of trip we wanted. After a few beers and a quick burger, we masked up and boarded a small regional jet bound for the 90-minute flight to Duluth. 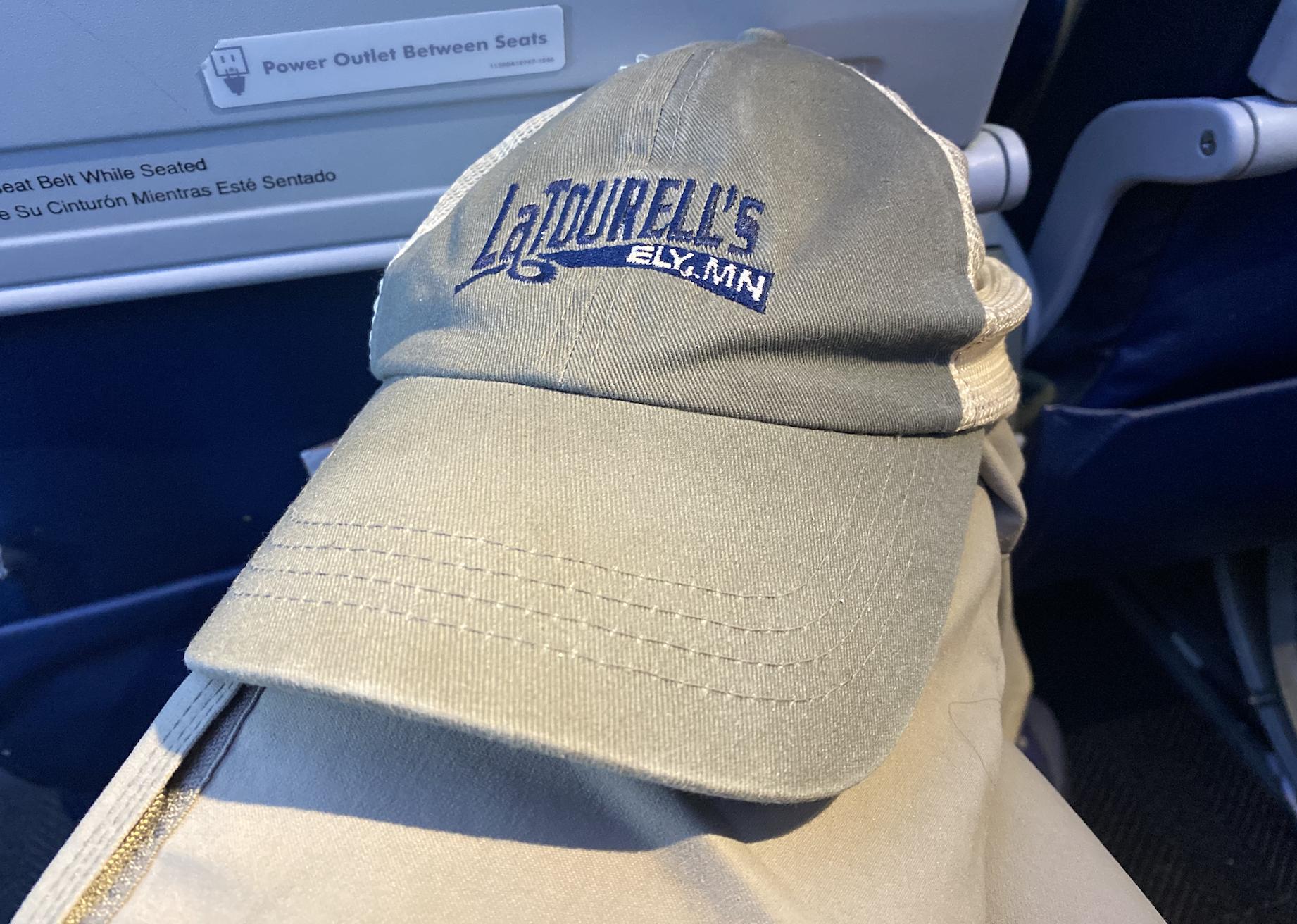 A quick stop at the rental car counter and we were on our way. I may have overdone it with the Yukon XL car rental. The thing looked like a tank and had more than enough room for all of the bags and then some. The Duluth Walmart provided the necessary last-minute additions like summer sausage, Wesson oil, and what we thought would be enough peanut butter and jelly to feed us for the week.

The short drive up the Ely flew by and we soon found ourselves at the Boathouse sipping on IPAs and downing gunboats (cream cheese stuffed jalapenos topped with sausage). It would’ve been their blueberry beer but the waitress had a wicked Minnasota accent and we couldn’t understand most of her beer recommendations. At the end of the meal, she told us it was the blueberries that weren't in season, but they had more than enough beer in stock. I couldn’t resist a walleye sandwich for dinner with the ever-present possibility of getting skunked if we didn’t catch any fish. A quick stop by Piragis to pick up a Garmin InReach rental and we headed towards the Williams and Hall lodge on Moose Lake. 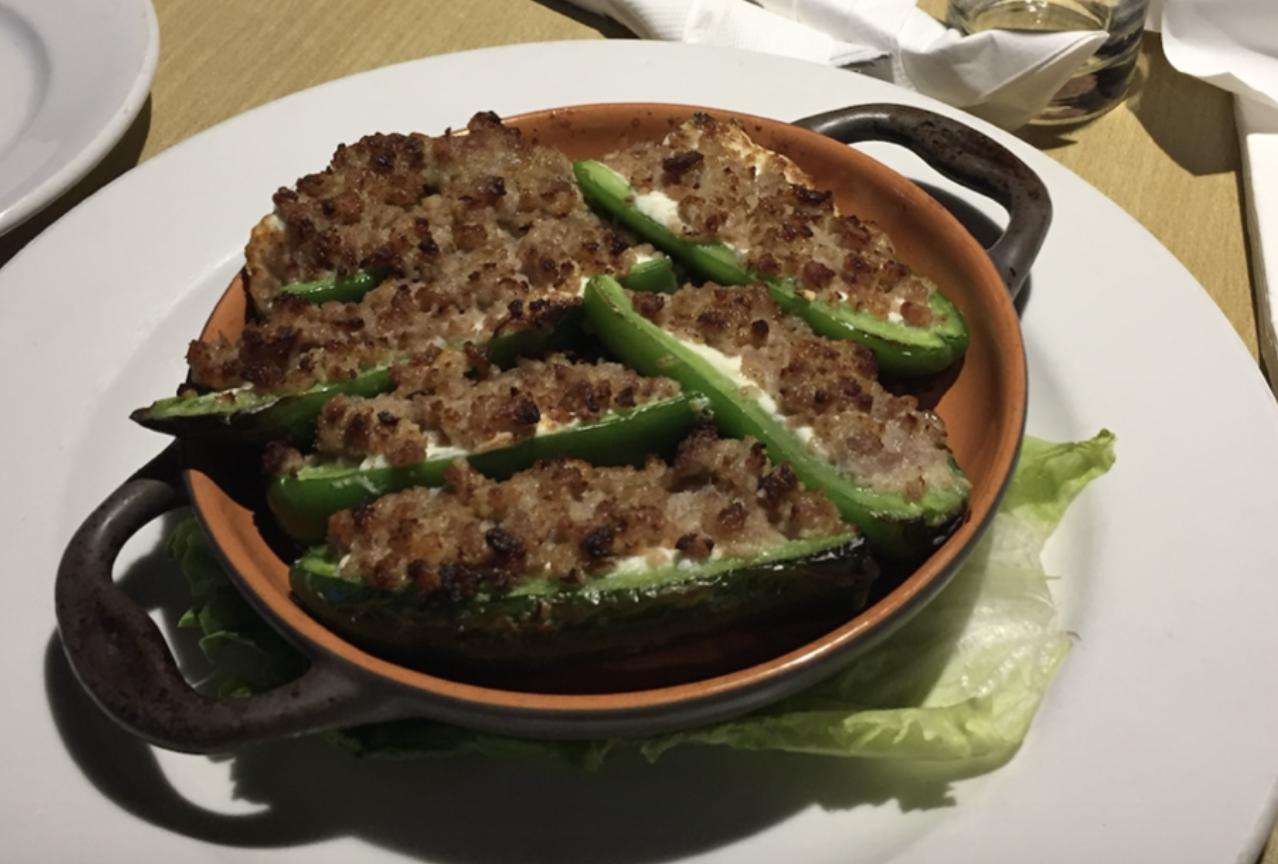 We reached the lodge about sunset. Everyone had already left for the night and we had called ahead to get instructions on finding the room. We couldn’t resist heading straight down to the docks and taking a look around. We quietly eyed the canoes wondering which ones were destined to be our trip partners for the week. I don't know if I'm the only one that does this, but I eyed each solo wondering which would take me on my way. I had read multiple forums on whether three travelers were better in one canoe or a tandem with a solo. I had never paddled a solo before but had the itch to try it. There was no way in my mind the three of us were going to all try to fish out of one canoe. 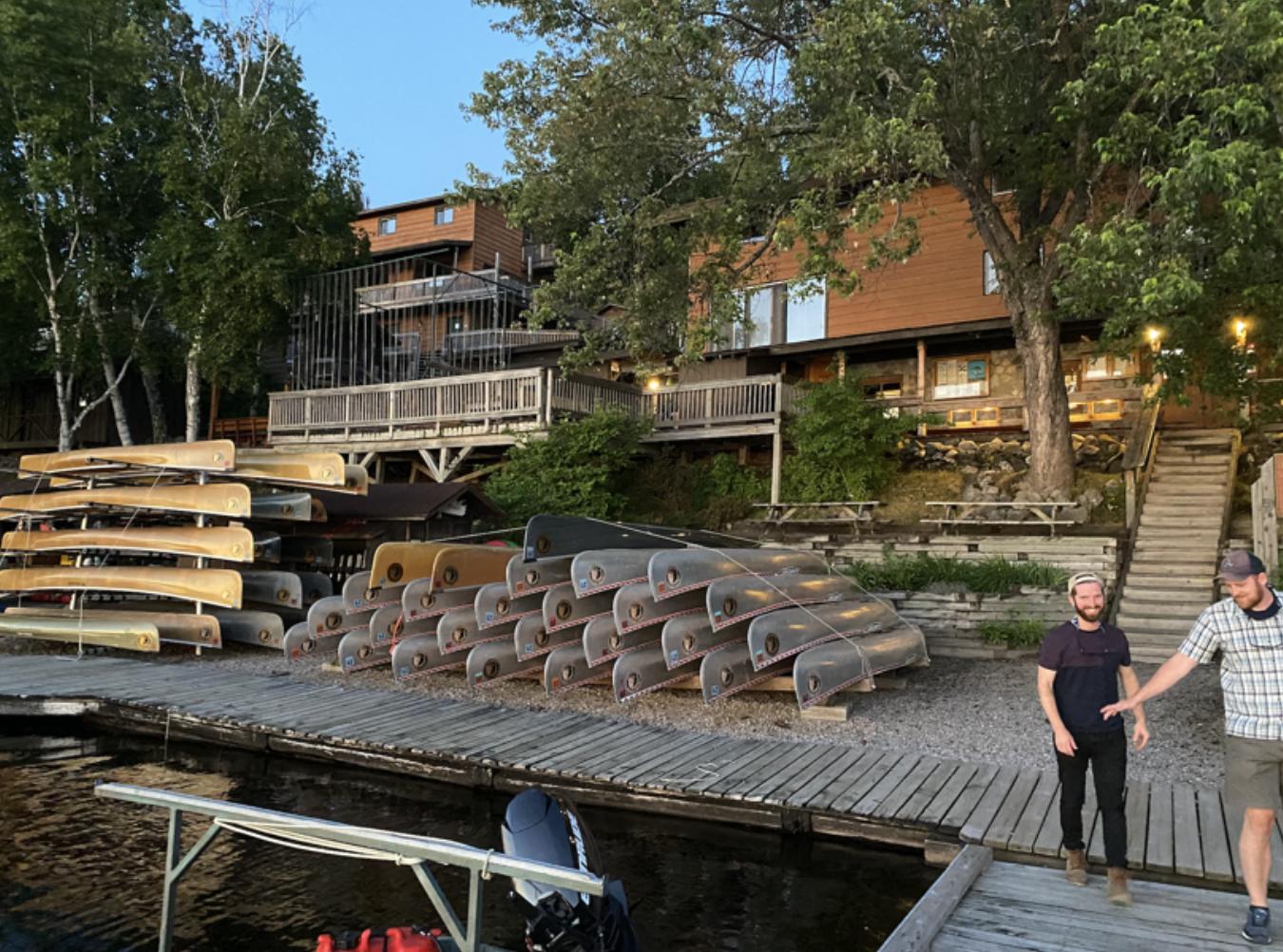 Each of us made those last-minute phone calls to the wives knowing cell service would be nonexistent the following day. I vaguely remember these same docks more than twenty years prior with the Boy Scouts. Standing on the docks made me confident this was the same place. It made me want to jump in the water and relive that childhood memory. 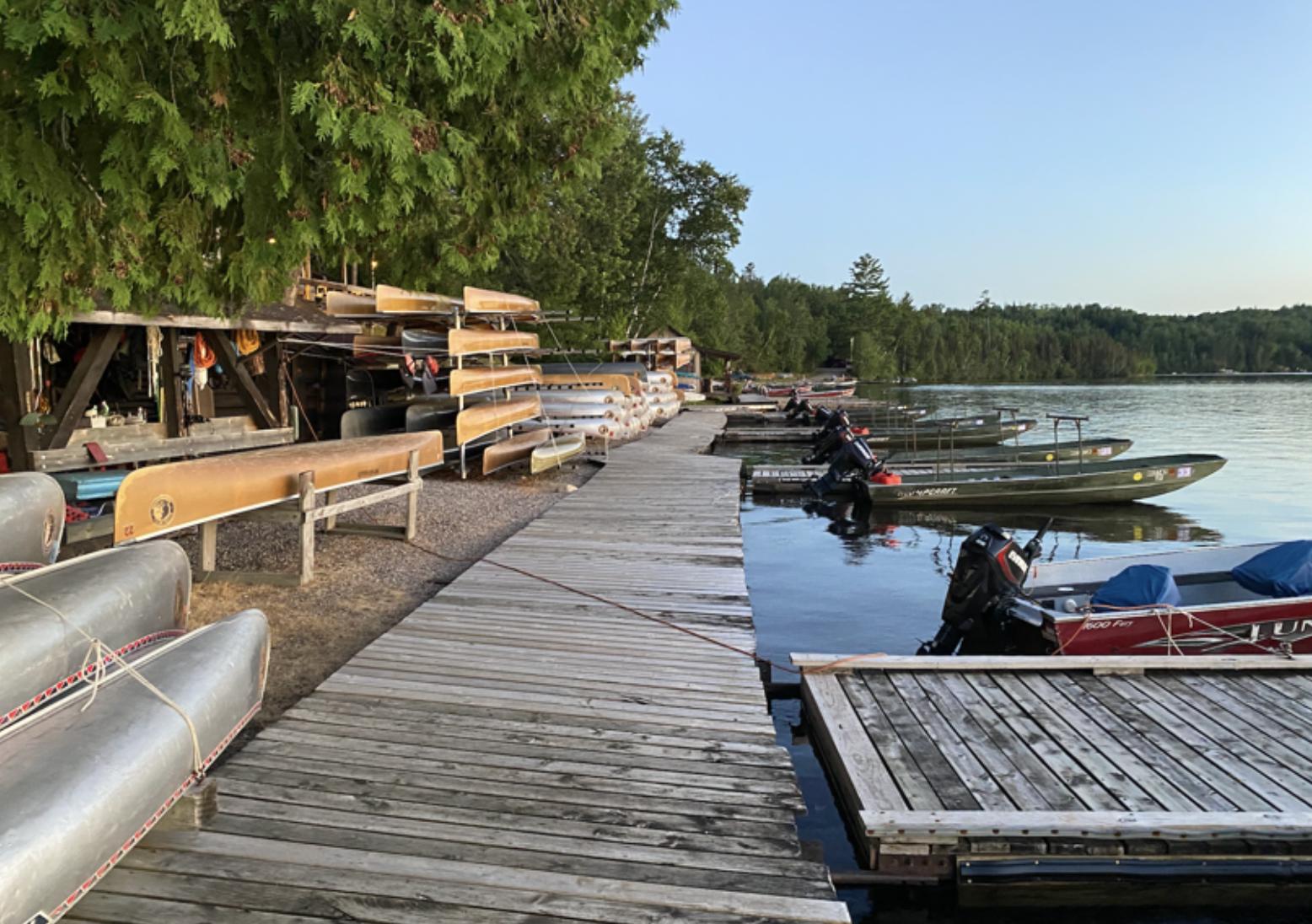 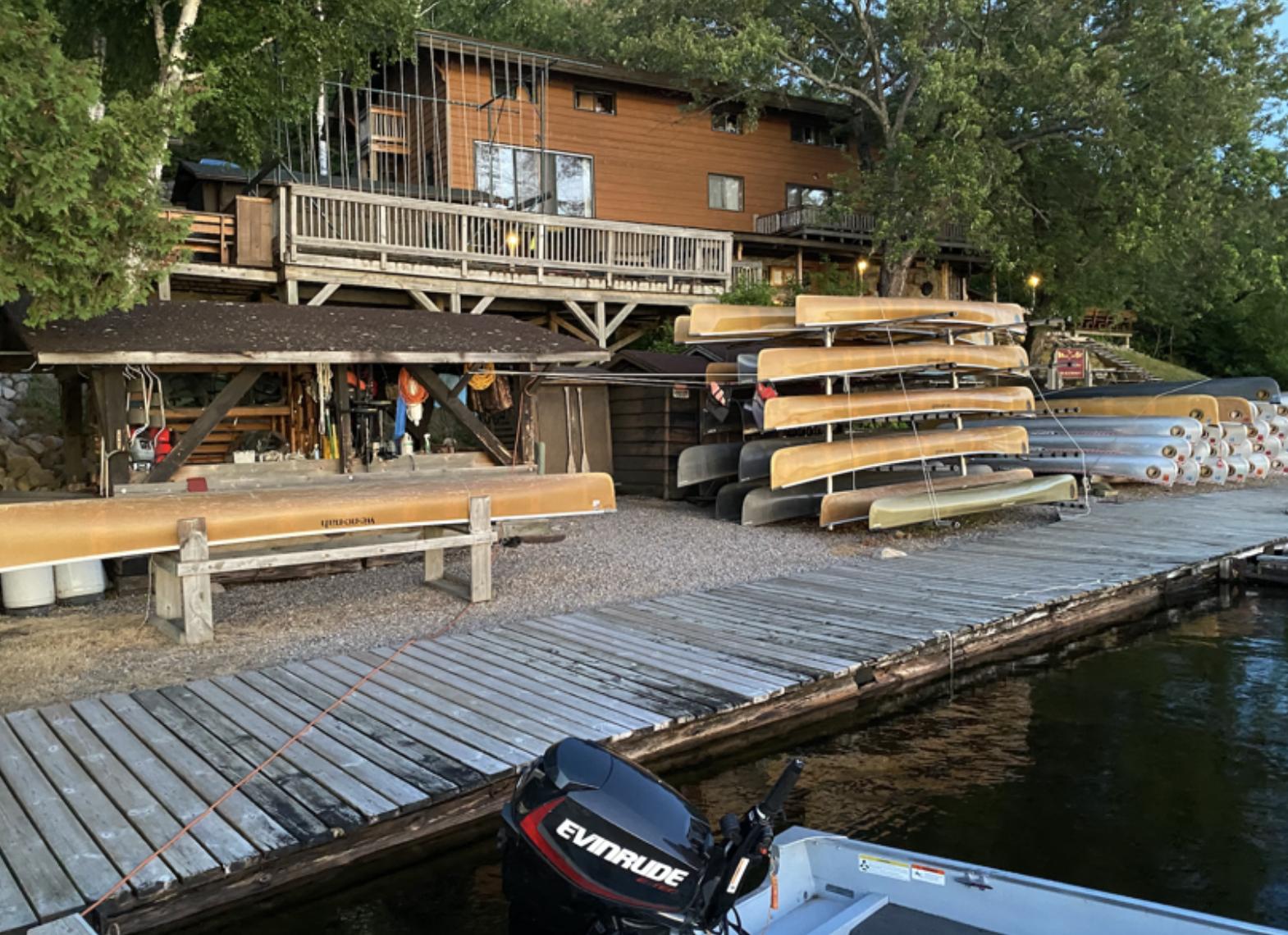 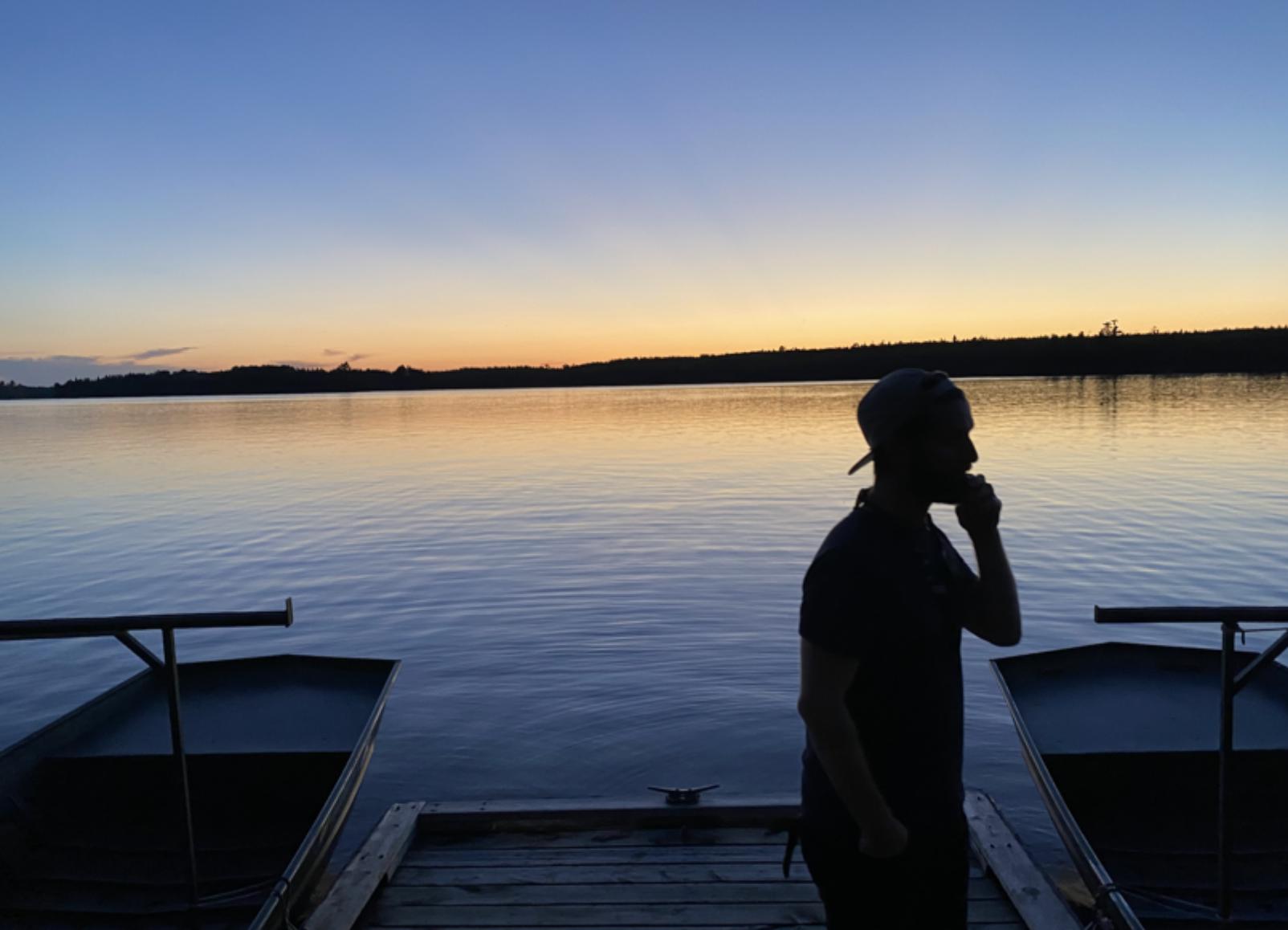 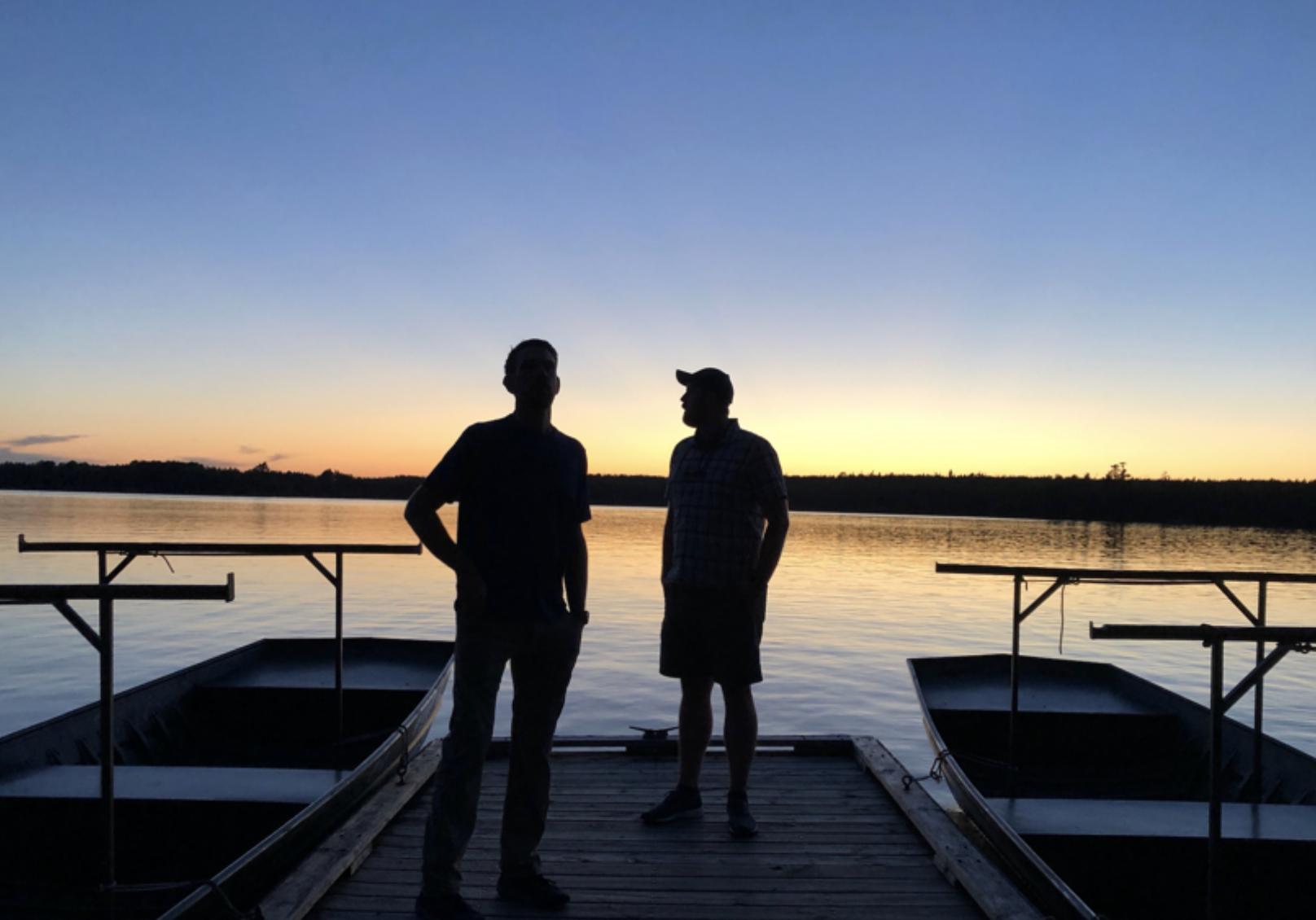 We found our way up to the room and spent the next hour unpacking and repacking, eliminating redundant items, and trying to minimize the painful portage weight we knew was to come. Sleep did not come easy as the nervous anticipation of another year’s trip on the horizon. The heat wave Ely was facing didn’t help sleep either. 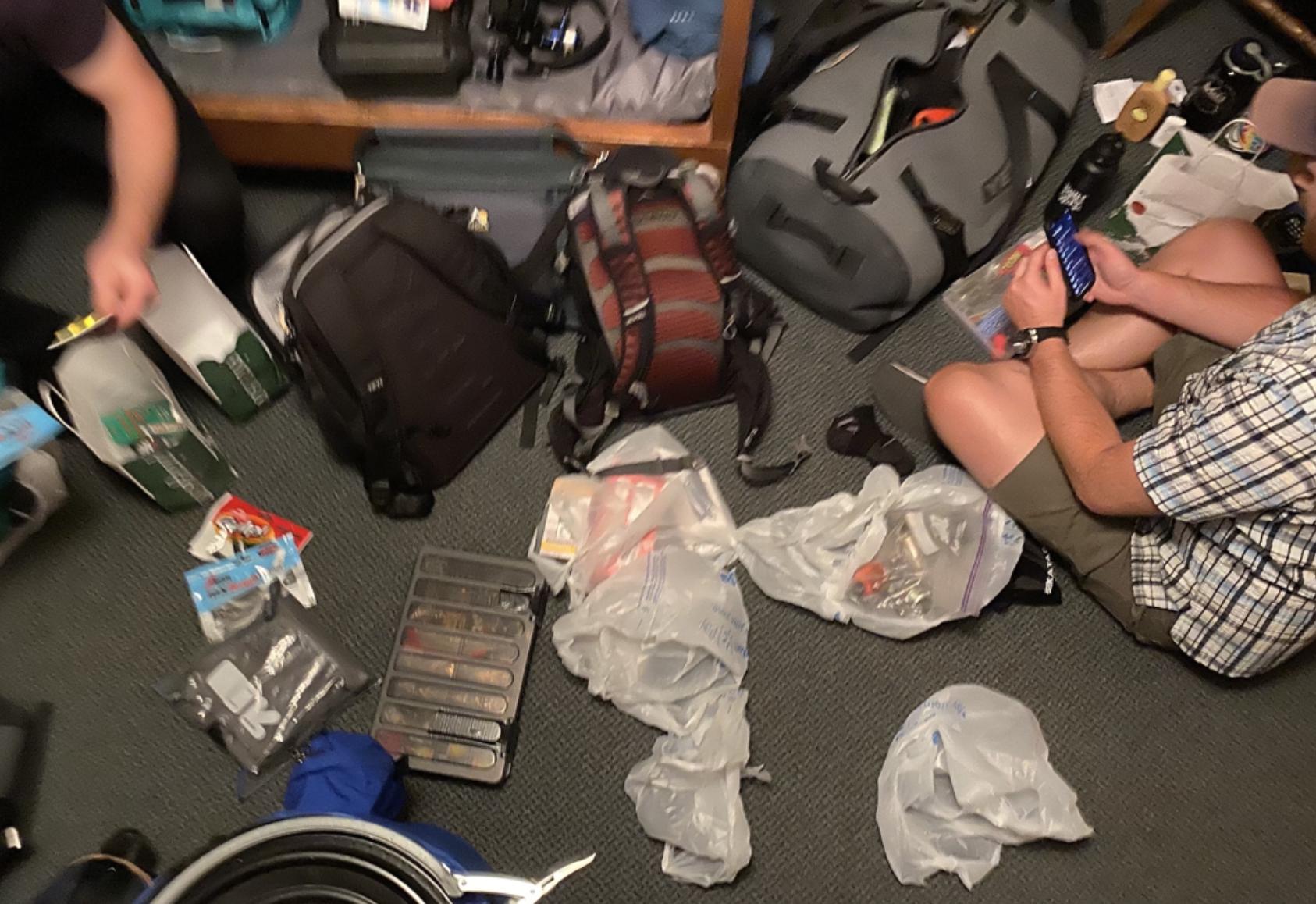