Trip Type: Paddling Canoe
Entry Date: 10/15/2020
Entry & Exit Point: Lake One (EP 30)
Number of Days: 3
Group Size: 1
Trip Introduction:
Discuss Trip: View Discussion Thread (9 messages)
Day 1 of 3
Thursday, October 15, 2020
Back up for one last trip. In late August I did four days on the numbered lakes and as September went by, I thought I'd squeeze in one last one before it got too cold. I checked my work schedule and the best time would have been a long weekend starting on Thurs Oct 15, and when I first looked at the extended forecast it was highs around 60 and lows around 40. Not too bad.
But then every day the forecast started to get colder and colder, to the point where just before I left it was calling for highs in the mid-high 30s and lows in the high teens or low 20s, and several inches of snow on Saturday. Well, !@%*$. It'll be memorable, right? And as long as I remembered my rules of a solo (take it slow, don't be stupid, if you !*%@ up there's no one there to help you) I'll be fine. I told my friends and family to watch for headlines of "local idiot capsizes, freezes to death." I picked up some more wool socks, smartwool long underwear, a thermolite liner for the sleeping bag, etc.
4:45 am, up and out the door, 4 hours north to Ely. I had my usual McDonalds breakfast on the way up, in Cloquet instead of Virginia, and got to Ely by 9. This time I tried a Northwind Solo canoe as the past two trips I used a Wenonah Prism. I think I prefer the Northwind, but I'll alternate between the two a few times to be sure.
It was a gorgeous day. Sunny, so even though it was about 37 degrees I was paddling with no hat, no jacket, no gloves. I tucked a reflective space blanket package in the life jacket just in case I was going to make headlines of local idiot capsizes, and I eased my way through lakes one, two, and three back to the island on the north side of Three I stayed at in August. 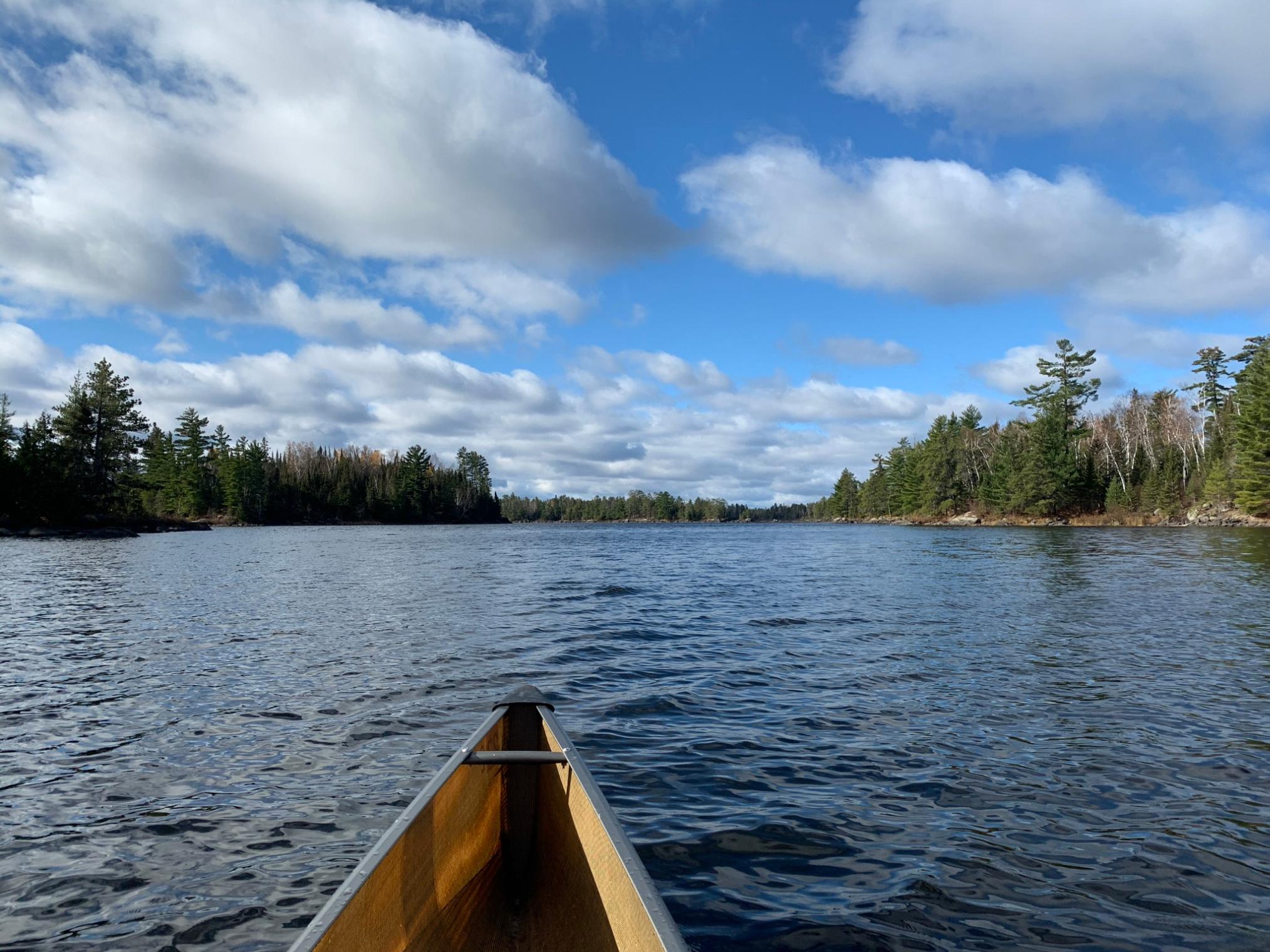 At the entry point there was one guy on a kayak, and 6 people (one group? two?) who were taking their time. I saw no one else through One and Two, other than a duo in a tandem who I caught up with at the portage into Two, and passed them on my way down to the island. Compared to August, where every single site through Three was occupied, this was a pleasant change of pace.
I got ashore, I opened the bear barrel for a granola bar and left it open for a minute while I set up the tent, and then caught a squirrel with his paws up on the side trying to get in. I screwed the lid back on, but by then he decided it was worth some effort, and when my back was turned I caught him trying to gnaw through the lid. I don't have claw marks from a black bear on the bearvault, but I do have teeth marks from a determined squirrel. 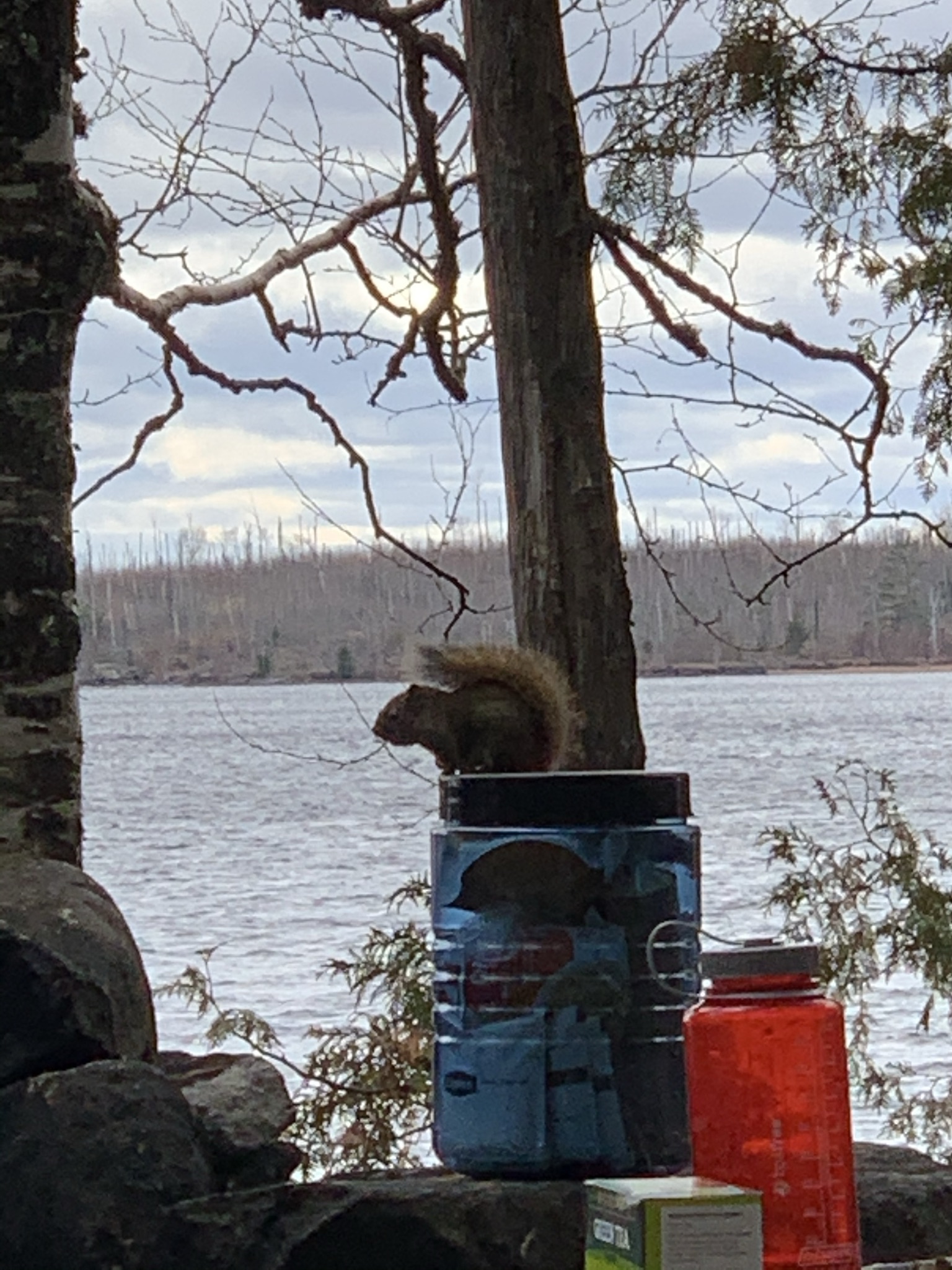 Since it was going to be so cold, I decided it was also the perfect time to pack a lot more fresh meat than usual. First night? CHEESESTEAKS. But as I was frying up the beef, and mixing in the onions and green peppers, the mice, chipmunks, and red and grey squirrels all came out in force. I saw my loaf of bread wobbling from side to side - because there was a mouse gnawing on the other end of it a foot away from me. Little !%@*.
6:15 pm sunset. Wind blowing, cold as hell. I burrowed into the thermolite liner, into the sleeping bag, and realized I couldn't feel my toes, and the liner was so tight that I couldn't grab them with my hands to warm up. The things you learn how to handle when solo camping below freezing for the first time. Also, helpful things like "zip up the windows on your tent, because you're losing heat through that, idiot" and "maybe pull your sleeping bag up to your neck both above you and below you, because that'll keep you warmer."