Trip Type: Hiking
Entry Date: 09/11/2020
Entry & Exit Point: Angleworm Lake (EP 20)
Number of Days: 2
Group Size: 1
Trip Introduction:
It had been a few years since I had last wilderness camped. Having little kids has mostly limited us to car camping these days. A canoe trip had been planned earlier in the summer but had to be cancelled do to a covid concern, but eager to get out in the wild, I decided I would make a trip happen with a solo backpacking excursion and was recommended Angelworm as one of the nicer trails in the BWCA.
Discuss Trip: View Discussion Thread (3 messages)
Day 1 of 2
I drove up Thursday night and camped at August lake near Isabella. The site on August was so nice and the skies so clear, I stayed up later than intended gazing at the Milky Way. So Friday morning I didn't get quite the early start I wanted to on the Angleworm trail. I make a quick stop at Zup's in Ely for some beef sticks (a favorite trail snack). Drove to the trailhead on Friday morning (the lot full of cars) and hit the trail around 10am. Friday morning's weather was cool and sunny and the 2 mile portage to Angleworm lake that starts the trail was mostly dry. When I reached the lake, I determined to do the trail "clockwise" starting up the west side of the lake. 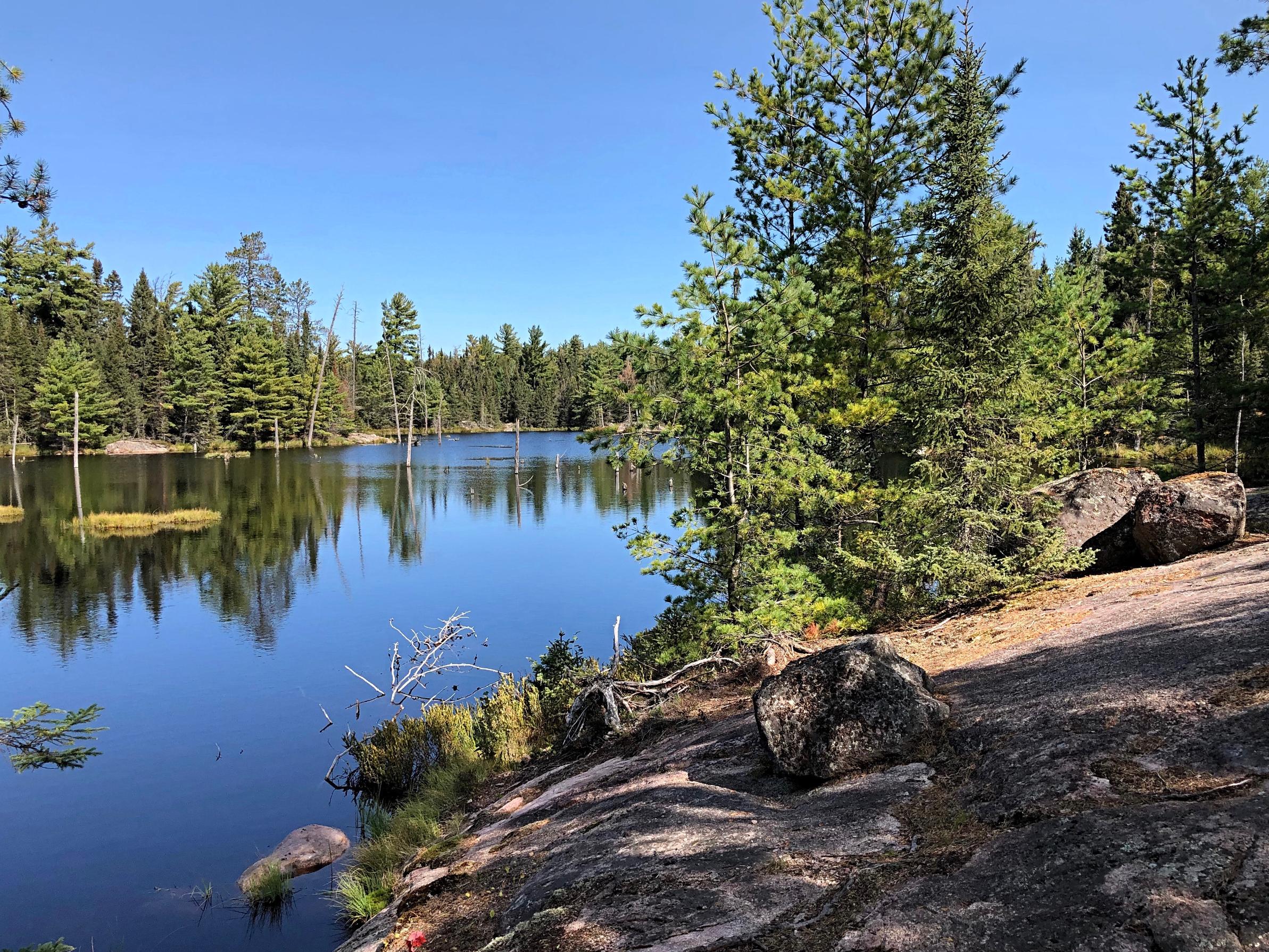 The first few miles of the trail stayed near the lake. I noticed two of the the three backpacking sites on the southwest part of the lake were occupied, and the third seemed in some disrepair. There are some lovely lake views from this stretch of trail. A few canoe parties were out on the water as well as a few hikers who crossed my path going counter-clockwise down the trail. Despite the fact that we were past peak-season and post-labor day, there was still plenty of traffic in the park.

After a few miles following the lake shore, the trail begins to climb some elevation. This coincided with warming temperatures and my pack started to feel heavier (I was a much younger man the last time I went backpacking). The forecast for Friday was supposed to be low-60s and clear, but by mid-afternoon it felt much more like the 70s and a touch humid.

About halfway up the lake on the west side, the trail begins to head into the hills and over the western palisades of the lake. Big pines and cedars along the lake shore give way to mixed hardwoods on the west side of the ridge. I spotted a little moose scat on the trail, but would not ever lay eyes on a moose this trip. There is also a campsite quite near the trail up on the western ridge, unmarked on the maps I was using. My goal was to get to the backpacking site on the north side of home lake so I pressed on. Angleworm trail climbs and descends many times and feels much more "hilly" than what you'd expect in this part of the arrowhead.

When I arrive at Home Lake around dinner time, I am not thrilled with the campsite. It sits up in the woods aways from the lake, a little crowded with trees, and is not far from the trail. I was hoping for a site closer to the lake, so even though it is late in the day, I decide to press on to see if I an find a spur trail to the canoe site on Home Lake or to go all the way Whiskey Jack lake where I am told the site is very nice.

I hike on but I'm not able to find a spur down to the canoe site and I'm concerned about diminishing daylight so I determine to get to Whiskey Jack. The east side of the trail is not much less difficult than the west side, with many ups and downs. By this time I am feeling pretty zapped. Somewhere along the trail my Nalgene bottle has fallen out of my backpack. Fortunately, I have a back-up water bottle but I am probably not drinking as much as I should. I am very ready to make camp for the night and get off my feet. Unfortunately when I arrive at the Whiskey Jack campsite I find it already occupied. At this point I am not sure what I want to do: backtrack to the site at Home lake or press on many miles further to the last backpacking site on the southeast side of Angleworm? My tired legs decide to press on.

At points on this stretch of high, rocky ridges, the trail becomes a little more difficult to follow were it not for a series of cairns to keep you pointed the right way. I am glad the dry conditions keep this challenging segment from being slippery. As I descend back towards Home Creek, I see the canoe site on the rocky point in the narrows and find the spur trail down to it. I finally have an unoccupied and otherwise beautiful campsite just as the sun begins to set.

The site has large open spaces with views up and down the lake. It sits a little low along the water. In wetter and warmer conditions, some nearby marshes would probably make the site incredibly buggy, but by this time in the fall I can count on one hand the number of mosquitos I've seen the whole trip. I quickly set up my hammock and tarp, but then realize I've positioned myself right under a nice widow-maker. I am able to make a hanging spot work with the large pine by the fire pit and a balsam at the edge of the site. I take a quick dip into the lake and the cold water is refreshing and invigorating after a sweaty afternoon of hiking. Being largely wide open and well used, firewood is a little sparse but I am able to find enough to cook some dinner and warm up a little after my swim. I packed a frozen steak and some mashed potatoes for my first night's campfire meal, but I am so tired from my extra unplanned miles, I can hardly finish it before hitting the hammock.