Ice is Nice?
by TreeBear

Trip Type: Paddling Canoe
Entry Date: 10/17/2020
Entry Point: Homer Lake (EP 40)
Exit Point: Brule Lake (EP 41)
Number of Days: 2
Group Size: 2
Trip Introduction:
It had been a year since our magic fall trip to Bower Trout last October. After an insanely busy summer working outfitting on the Gunflint, I was looking forward to a quieter trip again. My past guiding buddy found room in his schedule, and the trip was booked for October 17-18. We were set to park cars at Homer Lake and Baker Lake, spending a night at the Baker Lake Campground before leaving early to start at Homerr. The forecast looked dismal which was perfect for a weekend of incredible adventure.
Discuss Trip: View Discussion Thread (8 messages)
Day 1 of 2
Saturday, October 17, 2020 We met at the campground late Friday night and were surprised to see it mostly full. I shook my head. Despite the craziness of this year, it still amazed me to see this many cars at a tiny entry point during a time of year that is usually dead quiet. We took comfort in the fact though that most of the people who are willing to head out in a canoe in a snowstorm are of like mind to ourselves and would make fine company for the evening. We also grimaced at the thought of inexperienced groups who could be heading out dangerously under-prepared for this weekend when the weather turns and the wilderness punishes the unexpecting. Sleep was fleeting as both of us were way too excited for another snowy canoe trip.

We woke before sunup. The plan would be to leave a car at Baker and then head over to Homer to begin our trip. The Baker parking lot was nearly full which left us wondering if any of these people had seen the forecast? In any case, we made the drive to Homer, pulled the gear, and got ourselves to the water. We both felt overpacked, but this time of year makes more sets of dry clothes a wonderful luxury to have. The sun just began to rise as we crossed Homer Lake and we encountered a group hot tenting on one of the island sites. They were still sleeping as we silently cut westward. 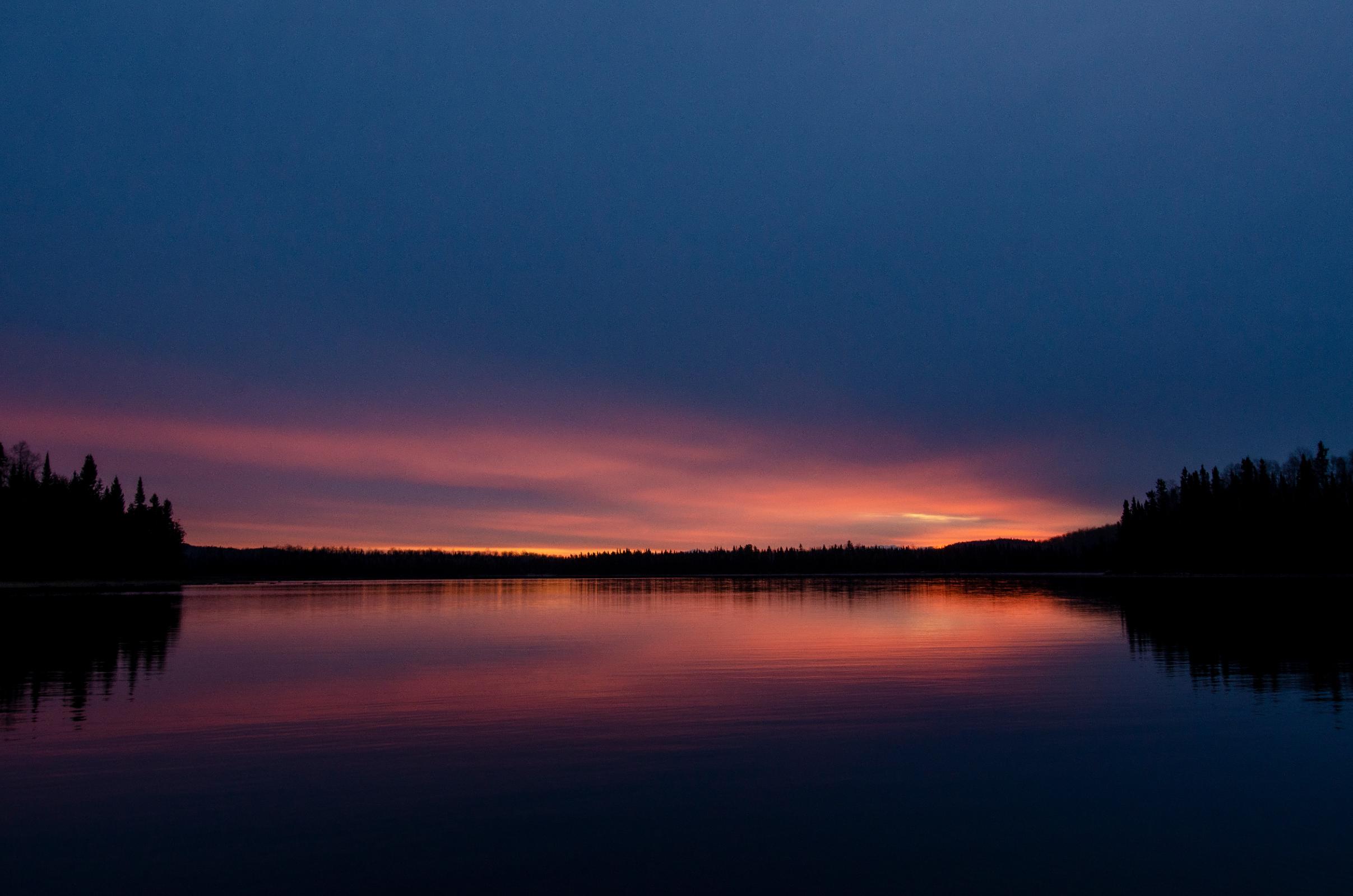 We made our way across Whack and into Vern, marveling at the unique almost savannah-like landscape and the magnificent rock faces. The weather was still clear and the paddling was going well. Somewhere on Juno the skies began to open and big, soft snowflakes began to fall. 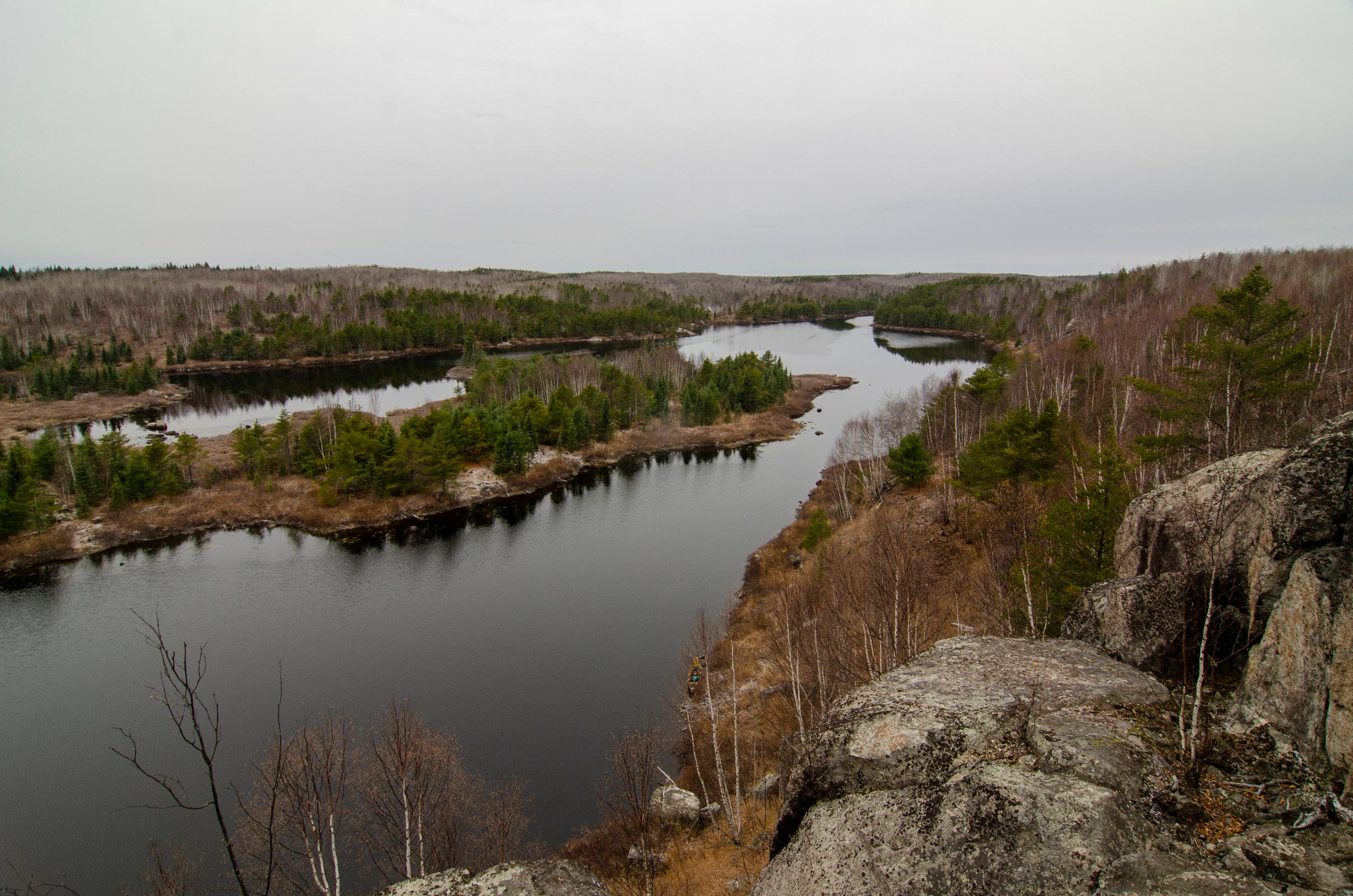 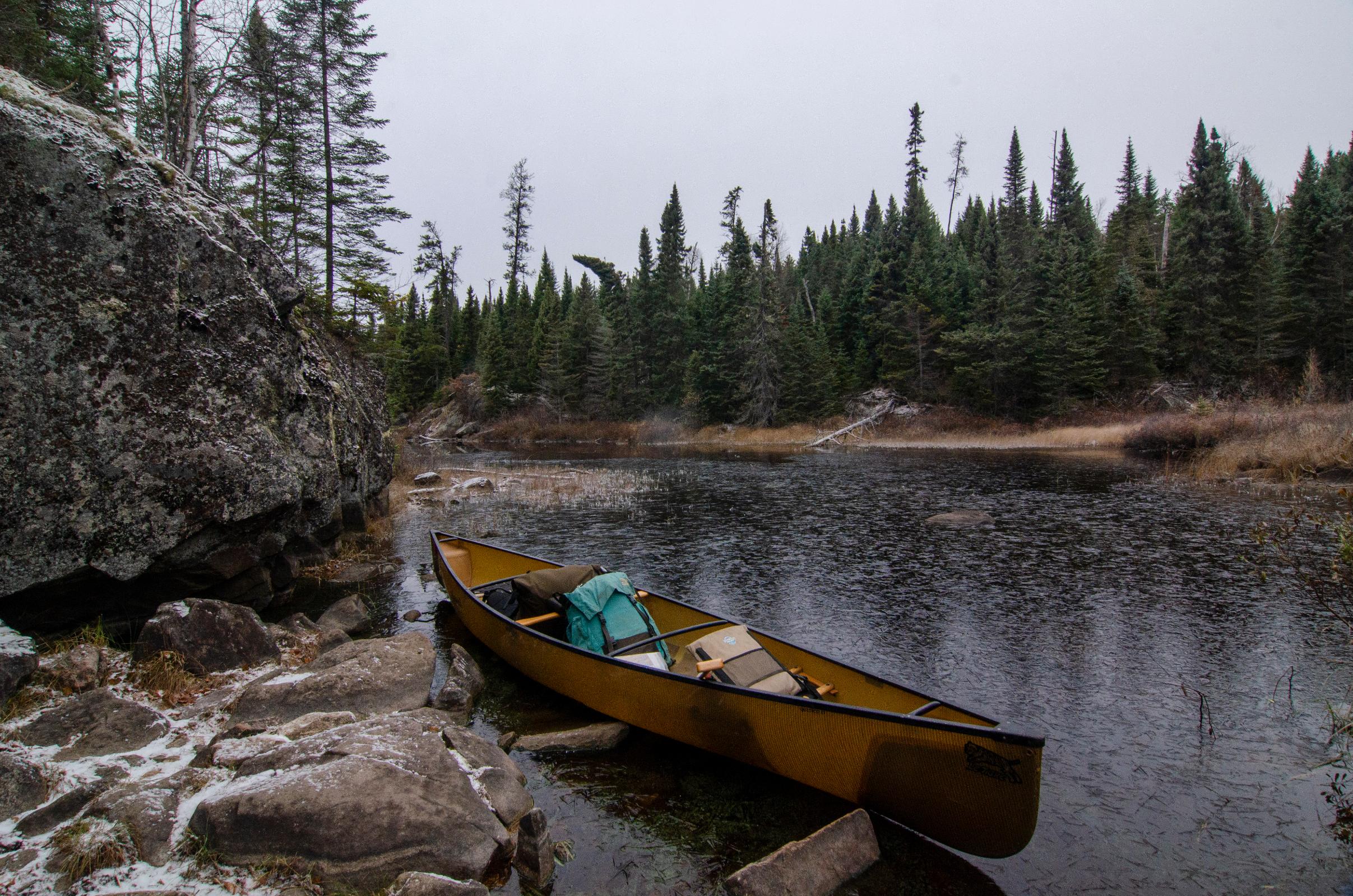 Across the portage into Brule, the snow really opened up. We ate lunch on Jack Mock Point and watched the snow strengthen to our west and our destination. Gratefully, there was an easterly tailwind to look forward to. By the time we crossed by Fishbox Island, we were nearing white-out with about a half-mile of visibility which feels disorienting on a lake like Brule. The rock slide on the western end was very well clad in the snow by the time we paddled by. We took a pitstop to hike into Wench before making the turn north. We had heard stories of infamy about the chain between here and Town Lake. The rumors that these four portages usually take over half a day to cross and have terrible footing. We couldn’t imagine snow helping that, but we looked forward to the challenge and the scenery. 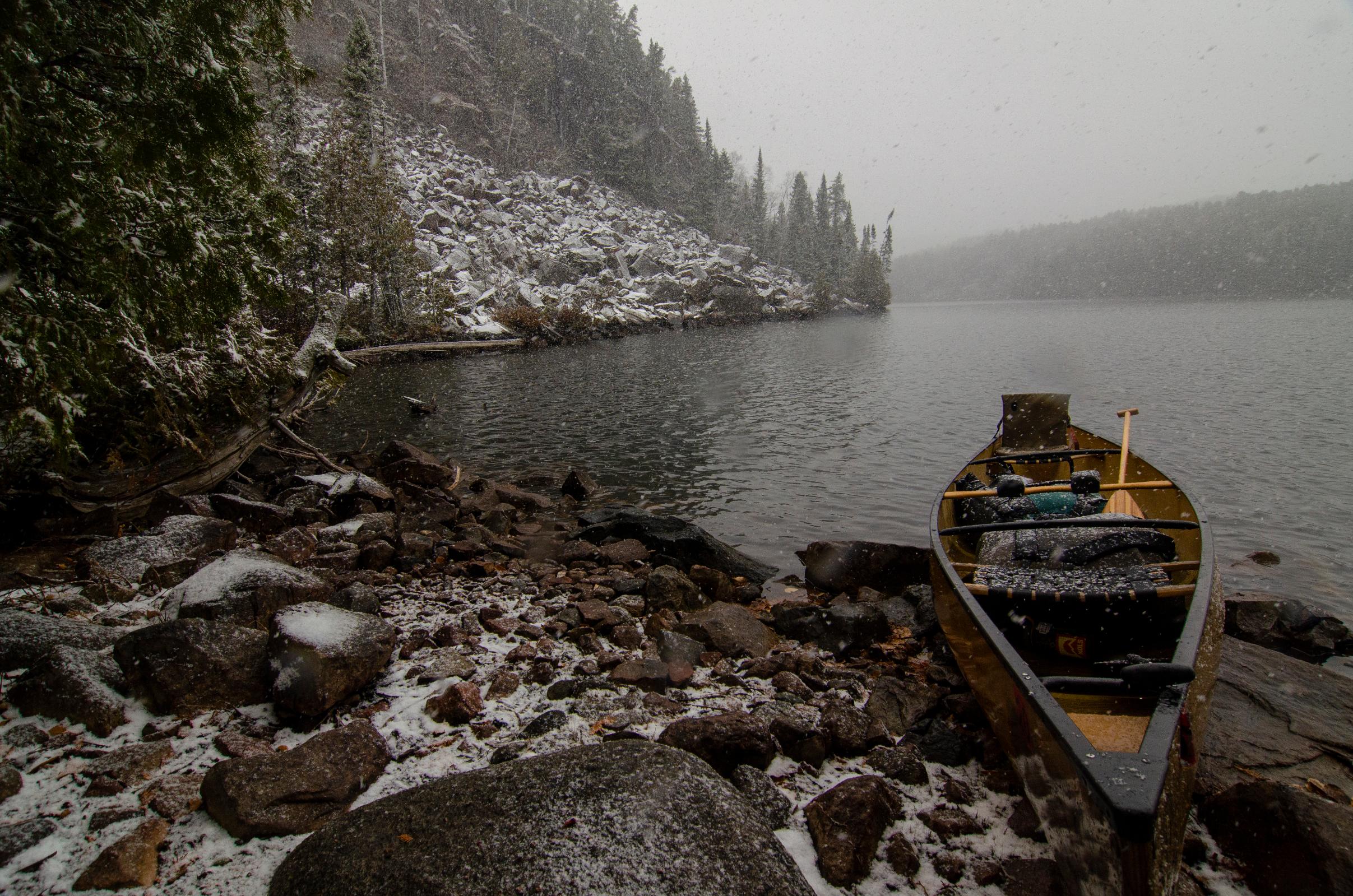 The four portages really didn’t disappoint. All had terrible landings, and left us asking why they “didn’t just build the landing over there in the flat spot.” I guess it wasn’t these ranger’s thing. The portages each had different challenges from the rocky footing, boulder scrambles, standing water, hills, and balance beams. These portages did earn their reputation, but man the reward was worth it! The incredible contrasts between the small lakes and the magnificent topography and geology that surrounds them was a marvel to behold, and the winter wonderland only compounded that beauty. 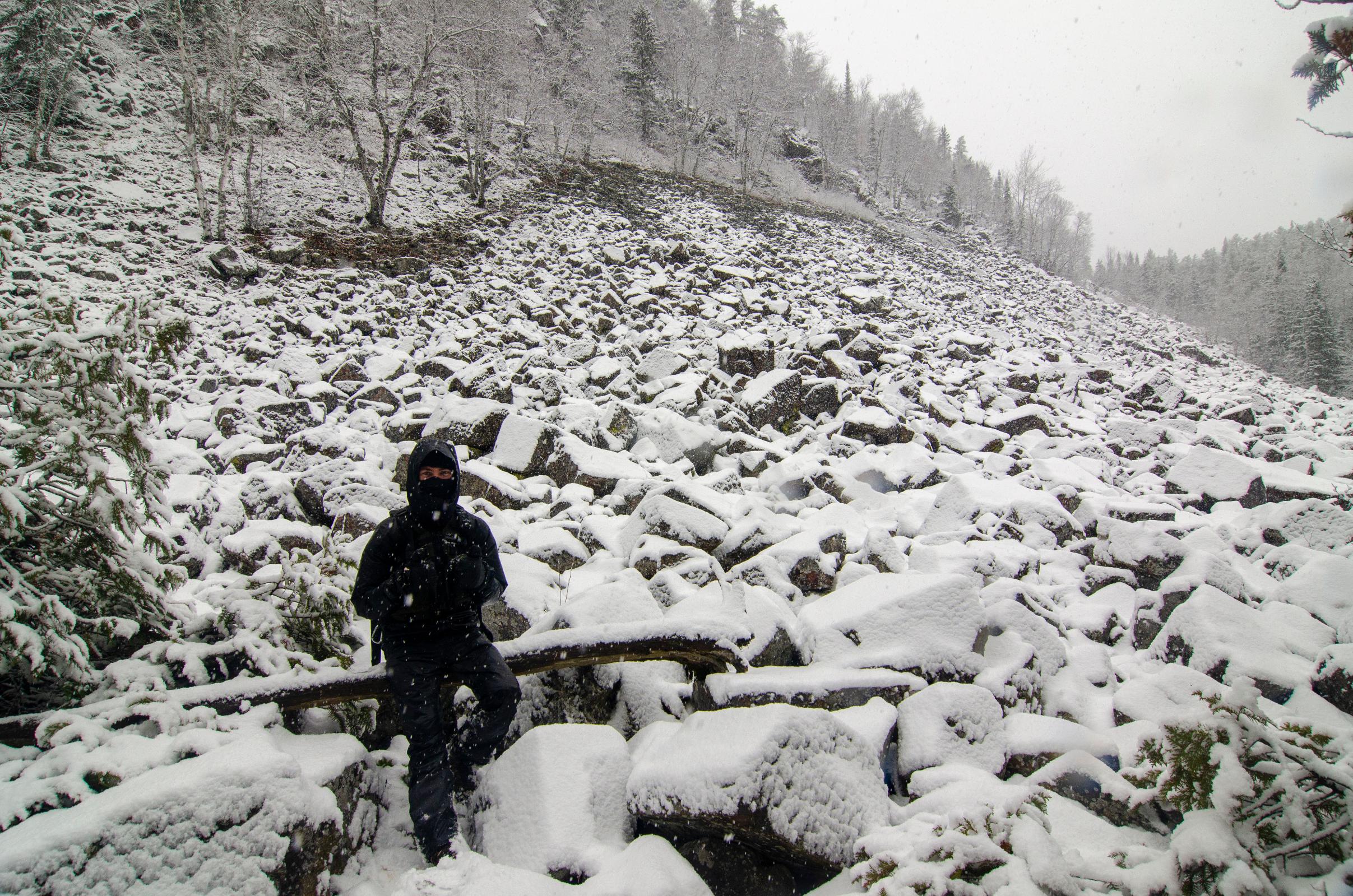 We reached Cherokee just shy of three hours after leaving Brule which was a good time, but still left us aware of the limited daylight this time of year. The lake seemed deserted with no other groups in sight and our choice of campsites lay ahead. As the wind swirled the snow around us, we discussed the merits of good campsites and how they may differ from the summer. The large, sloping rock face campsite in the distance, though reminiscent of splendid sun basking in August, looked desolate and wind-swept this day. We settled into a site in a small back bay that, though quaint, was sheltered and out of the wind. It was about 5:00 and the sunset was not too far away. We took a little hike back to Sniff Lake before settling in for a long night’s rest.