Trip Type: Hiking
Entry Date: 10/31/2020
Entry & Exit Point: Other
Number of Days: 2
Group Size: 2
Trip Introduction:
I have taken a week to process this one, and I am still not sure I fully grasp everything that happened a weekend ago, but I think it will make quite the memories and quite the story. But first, it was an unexpected summer. My guiding season shut down with the virus, but I still found work at an outfitter. It was wonderful to again spend the season on the edge of this incredible wilderness. This year, for the first time, I am spending the winter up here as well which I am looking forward to. I was lucky enough to take a lot of trips in my off time this year. Over the last few years, I have gotten to spend quite a bit of time in my favorite wilderness. I don’t know what it is, but somehow the Boundary Waters (and truly all wilderness areas) have this amazing way of always having something new to teach a person. No matter how many trips I take in all different kinds of weather and with all different methods of travel, I am always rewarded with a new experience full of stories and cherished memories and often a small dose of humility as well. And some extra special trips cost you a little extra tax on the body and an abundance of adversity through which to appreciate this one-of-a-kind place in a whole new way. This was one of those adventures.
Discuss Trip: View Discussion Thread (3 messages)
Day 1 of 2
Saturday, October 31, 2020

A couple of weeks back, we took a snowy, icy canoe trip into Homer Lake and up to Cherokee and loved it as usual, but it became apparent that there would be no November canoe adventure such as we did last year with ice quickly covering the lakes (though who knows with how warm it has gotten all of a sudden!) Thus the idea was casually mentioned that the incredible volunteer crews have gotten the PowWow trail into hikeable condition. It may be a little rough around the edges, but folks are getting through, including a new record time about a month back. Neither of us wanted to admit our doubts about us being able to hike it in a weekend. I mean, we are fairly capable outdoors people, but we excel in a canoe. We’re not true backpackers by any means and with limited daylight was the 30-mile PowWow really a good idea? Somehow or another we convinced ourselves that it was achievable and met at the Isabella parking lot late Friday evening. To those who remember back a week ago, it was getting pretty cold at night and there was still a fair bit of snow on the ground. The roads coming in were icy, so we were surprised to see a car parked at the PowWow end of the lot. When we saw the Boundary Waters Trails stickers, we knew we were in the presence of the real deal and two of the amazing individuals responsible for getting this historic trail back available to the public again. We slept the night and awoke early to begin our adventure. Since it was, in fact, Halloween, I thought it only appropriate to bring Haloween costumes for us to wear while hiking. It may seem goofy, but we were determined and stubbornly kept our costumes on for the entire first day. Oddly enough, just as we were donning our unique attire, a truck rolled in for grouse hunting. Boy, were we a site! We talked for a while with them, but this ghost and pumpkin had places to be. We knew we would have to be on our game to get around this trail in a weekend. We reminded ourselves of the halfway point that we hoped to achieve and then it was off. 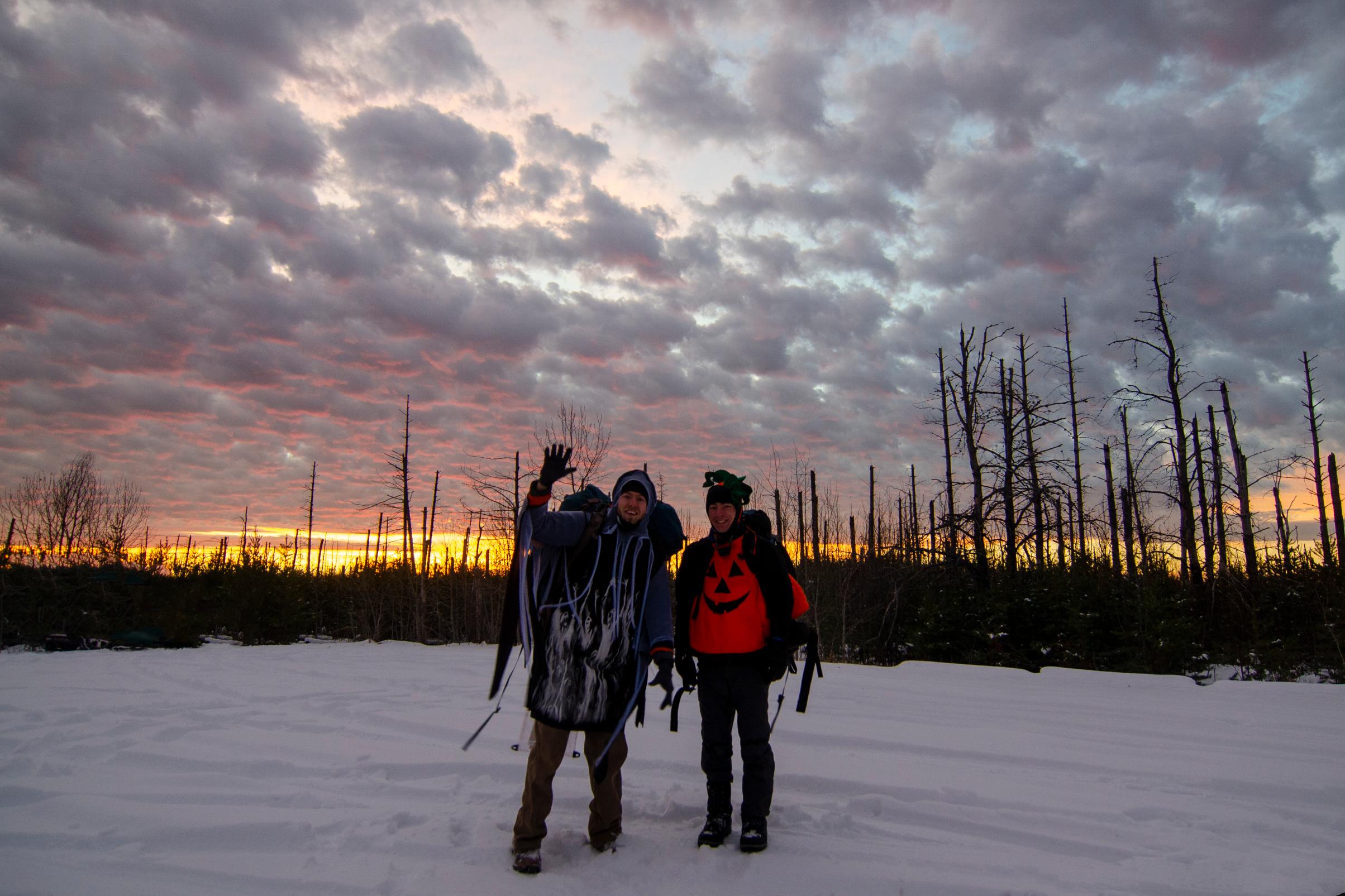 We made great time to the Isabella River where we filled waterbottles and de-layered a little bit (the costumes were put back on after the jackets were removed.) We admired all sorts of wolf tracks in the following mile (seeing all the tracks is one of my favorite parts of winter up here.) The wye came up pretty quickly. We borrowed a couple walking sticks propped there and continued clockwise around the trail. 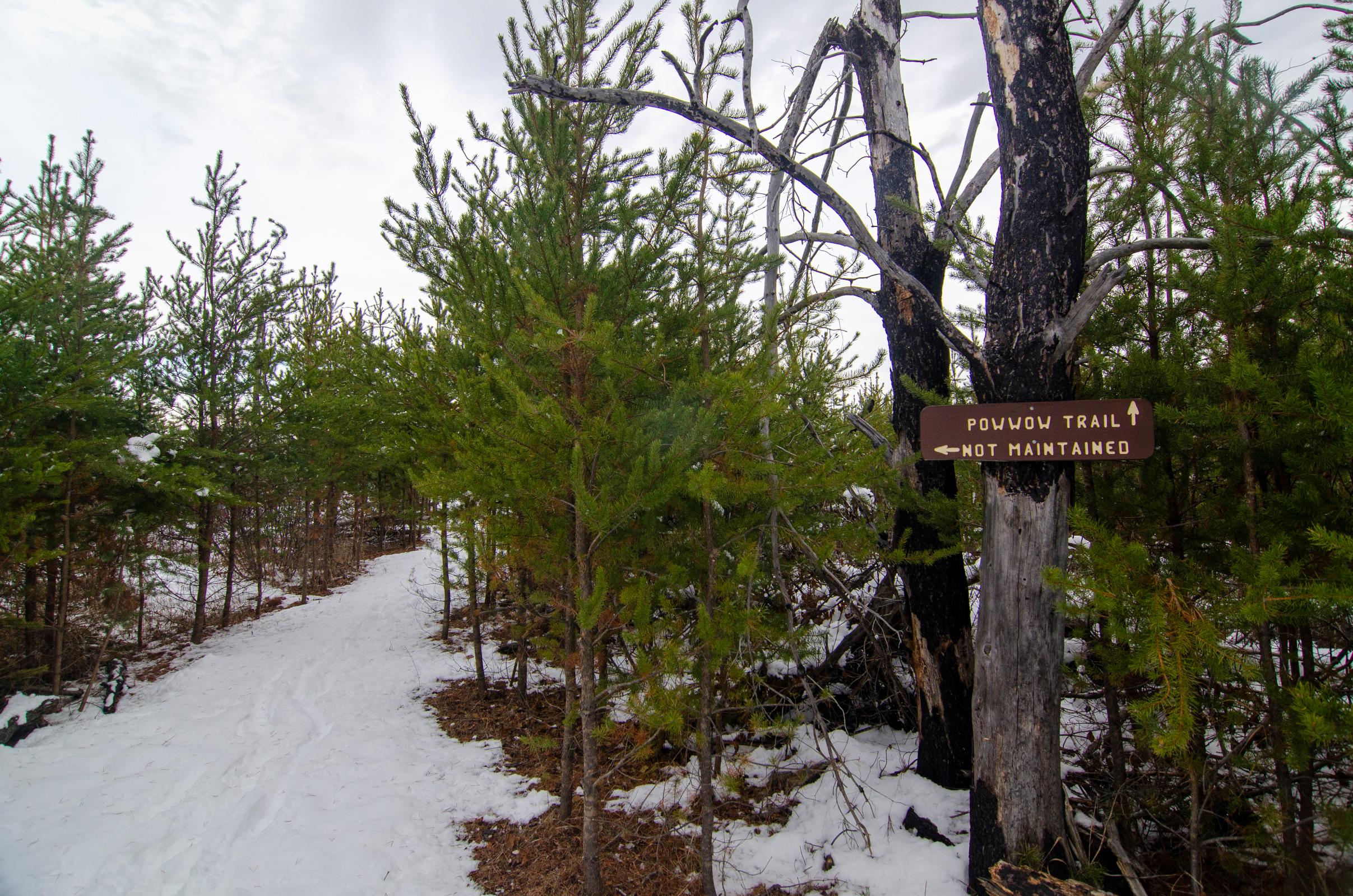 At the beaver dam crossing, it became clear the forecast for wind was not wrong. The winds were already strong enough that balancing on the dam with backpacking packs proved difficult. Neither of us wanted wet feet yet, and graciously made it across dry. Just past Fallen Arch, we turned the corner straight into a tent set on the trail. Trick or treat? It turned out to be the folks parked near the trailhead, the president of the friends of BWCA trails himself. He certainly wasn’t expecting to see a ghost and a pumpkin come around the corner, but once we told our stories, he turned into an incredible person to talk to. He had all the trail conditions memorized and gave us loads of tips which helped us in the days ahead. We left them to their morning and continued westward. We took our first longer pack set down break at the Marathon Lake campsite. This is where it became clear that we were definitely not quite in backpacking shape. The bodies complained some about the work already done, but we pushed those thoughts aside. There was a lot of trail still to cover. The Diana Green Zone was a treat and we broke for lunch at Campfire. Campfire Lake is quite the gem of a little lake. The wind was cutting in pretty good at this point and sporadic small pockets of snow would fall here and there. We continued west through the next green zone, marveling at how clear the trail was and how much work had been done to get it to that point. We broke again at the Superstition Campsite. 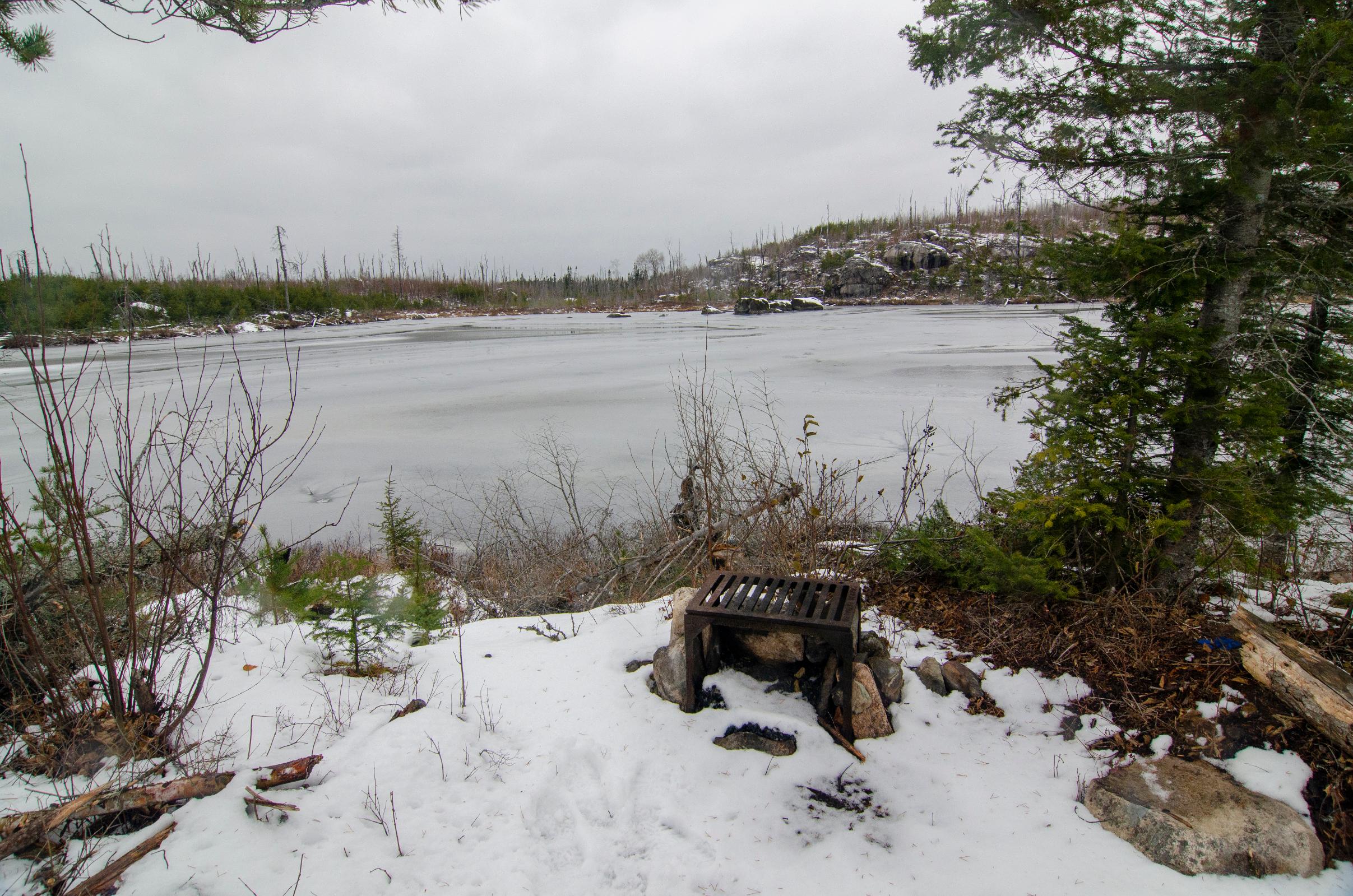 It was mid-afternoon and concerns were starting to grow that reaching Lake Three by nightfall was getting further out of reach. From Superstition, the trail grows much more difficult with stretches of boulder piles proving hazardous in the snow. Our pace slowed as we hit a small gnarly section near Mirror Lake and got turned around once or twice on the way to Path. The snow which covered obstacles in our trail finally caught up to me somewhere in this stretch as I stepped hard into a hole between two boulders. It would reveal to be a lightly sprained ankle in the coming days, but, for now, it was just one more nuisance. On one of the high hills above Path, we had our reality conversation. The sun was quickly setting and the winds were growing stronger. A look around at the giant, dead White Pines reminded us that this was not where we wanted to be spending the night with gale force winds possible for the late evening. But what choices did we have? Hiking in the dark can be risky. The chances of getting hurt go up as do the chances of getting lost. The stories of rescues of hikers going astray were playing out in the backs of both of our brains, but hiking at night felt safer than sleeping beneath the endless snags of the burnzone, so we pressed on. The sun finally disappeared completely before we reached Rock of Ages. The precipitation increased with sleet blowing sideways in the stiff wind as we pulled ourselves up the rock face at the end of the lake. We trudged on for a long ways into the night. We both were growing tired and sore, but, finally, we walked into green trees. Off to our left was a stiff wind coming off the frozen Lake Three. Our hope was to find the campsite, but we never did encounter it. We made camp on the trail in a thick grove of Cedars in hopes that the shelter from the wind would protect us from the night.