The Great Unknown
by DRob1992

Trip Type: Paddling Canoe
Entry Date: 07/27/2007
Entry & Exit Point: Saganaga Lake Only (EP 55A)
Number of Days: 7
Group Size: 2
Trip Introduction:
Hello all and thanks for reading. Whether you finish reading this trip report or not, I appreciate you giving me a chance at putting a smile on your face. First, a quick background about this trip then we'll get started. This trip occured back in late July / early August of 2007. The two people in the trip group included my dad, John (45 years old at the time), and myself (14 years old at the time). The water we covered included Saganaga, Swamp, Ottertrack, Gijikiki, Rivalry, Lake of the Clouds, Lunar, Cherry, Topaz, Amoeber, Knife, Ottertrack, Swamp, and Saganaga (start to finish). I rated this trip as hard because we were both rookies to the BWCA, faced scorching temperatures, and experienced some tough luck/mistakes that increased our efforts. Because this trip occured over 13 years ago and I did not keep a journal throughout the trip, many things have slipped my mind. Therefore, I have decided not to write the report in chronological order. Rather, I've decided to break the trip into 3 separate sections. These 3 sections will be Fishing, Wildlife, and Lessons Learned. I hope you enjoy!
Discuss Trip: View Discussion Thread (7 messages)
Part 1 of 3
FISHING

My dad and I both had high hopes heading up to the BWCA in regards to fishing. We had a general idea of the 4 common species (lake trout, walleye, northern pike, and smallmouth bass) found in the BWCA. For this trip, we brought both leeches and nightcrawlers. So we expected to do well with live bait and potentially catch walleye, pike, and smallies with crawlers or leeches. We also planned on targeting lake trout on Gijikiki (we spent our first and second nights on Gijikiki). Although we were beyond anxious to get fishing, we held off until the portage leading into Gijikiki from Ottertrack. We HAMMERED the pike and smallies with leeches near and around this portage. We were able to see several pike and smallies aggressively hit the leeches - which made the experience even more exciting. After a couple hours of non-stop action near the portage, we decided to put the poles away and tackle the portage into Gijiki. We were hoping for the island site but that site was occupied by a father-daughter duo who also happened to be out trolling for lake trout when we first got to Gijikiki. The daughter was only six years old and she was one tough cookie! We watched them each land a solid-sized laker within a matter of 20 minutes. Awesome! I remember being so inspired by those two. Anyway, we took the other site on Gijikiki (which happened to be a great site itself). My dad and I set up our tent, hung up our food, and waded out about bellybutton deep from camp. Oddly enough, we were each getting bites on crawlers pretty quick. Up until I reeled in the first fish, I was under the impression that Gijikiki held lake trout only. Turns out there are a bunch of rock bass in there as well. Maybe that's been pointed out on this forum at some point in time. So we each caught and released a half dozen plus rock bass; including a few that were pretty dang chunky and long. As dusk approached, we shelved the poles for the night and got busy around camp with a fire, juicy rare steaks, and whiskey for John (he may or may not have allowed me a half shot). What an incredible first day of fishing! Our second day happened to be very hot. We had planned on trolling early for lakers but, as a kid who just sprouted 6 inches in 12 months, I liked to sleep. This costed us as we misplayed the day and fished during the hot, sunny afternoon. I did happen to hook into a nice fish while trolling deep (maybe 50-60 feet?). I was using a big, silver shiny spoon. I fought the fish for what seemed like an eternity but the fish simply shook or spit the spoon without ever showing itself to us. It had the pole doubled over and seemed like a good one. We were both worn out and depleted after our time out in the hot sun so we headed back shortly after The Great White Buffalo got away. That night, we spent most of our energy playing cards, eating delicious snacks, and sipping instant coffee. Beyond those first two days and nights, I don't recall exactly which days we spent more time than usual fishing nor what fish we caught on which days. I do recall our best fishing site - which was located on Amoeber Lake. This site had tons of ripe blueberries, along with perfect cliffs to jump into the water. These cliffs doubled as a GREAT sight-fishing honeyhole. We were able to throw live bait out and watch the show as bass, pike, and even some walleye were landed from camp. All in all, we each caught dozens of average to plus-sized smallmouth and we each caught a dozen or so 22"+ pike throughout the week. I do recall that we went trolling with blue and orange deep diving rapalas our very last night. That night, after we each landed modest pikes, I caught back-to-back keeper walleye (that we wolfed down about an hour later). It was the perfect icing on the cake for our already-successful fishing trip. A quick bonus fishing story from this trip... We ran into a group (of 4 I believe - 2 father-son duos) on Ottertrack Lake. They happened to do really well fishing that evening and they informed us that they were planning a fish tasting session around sundown. They hosted us at our campsite and really took care of us. We tried pike, walleye, and smallmouth along with numerous mouth-watering sides. Big John even got to sample their 2 liquors. It was a real treat and, if you're out there reading this, we thank you greatly for your hospitality. 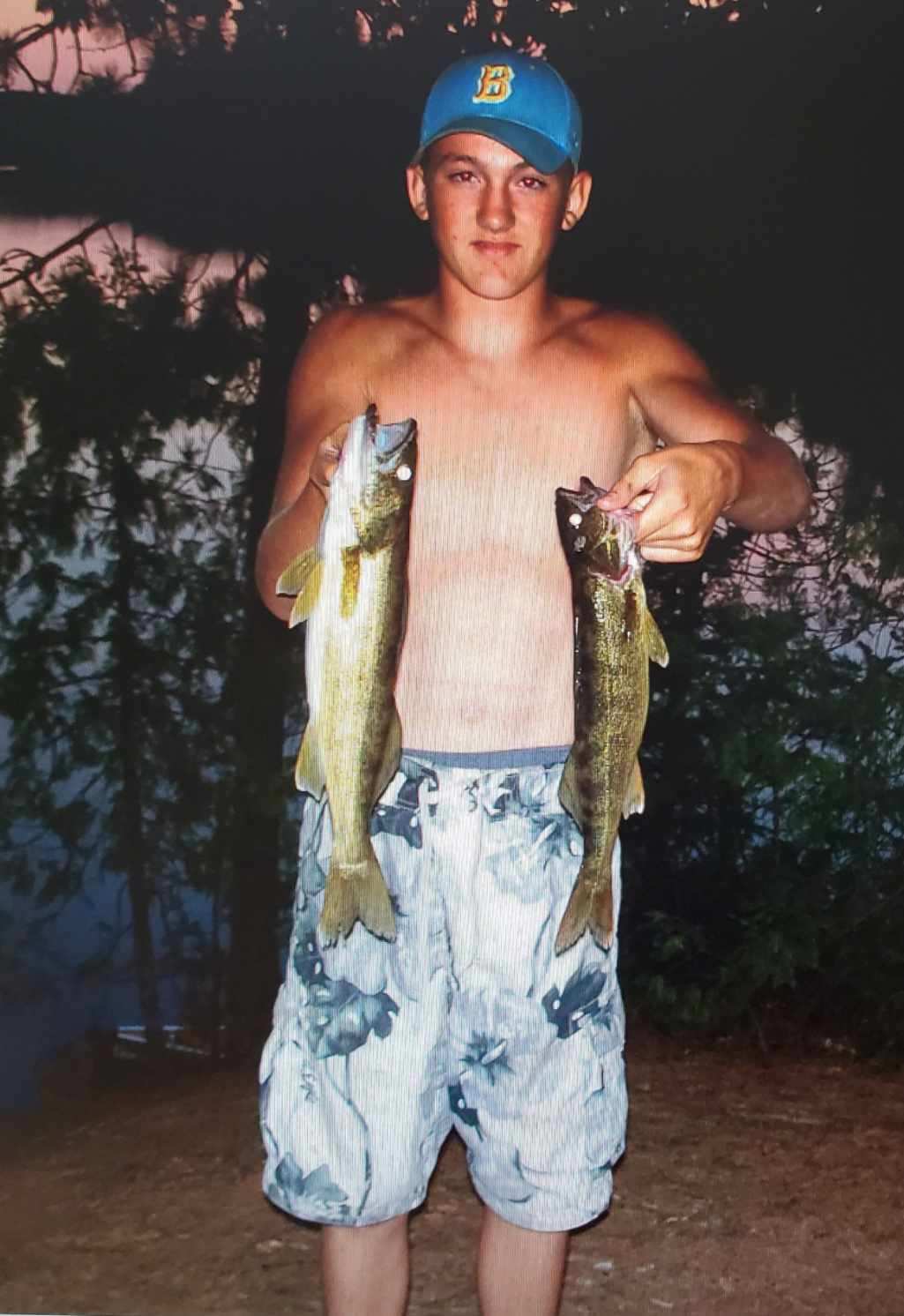 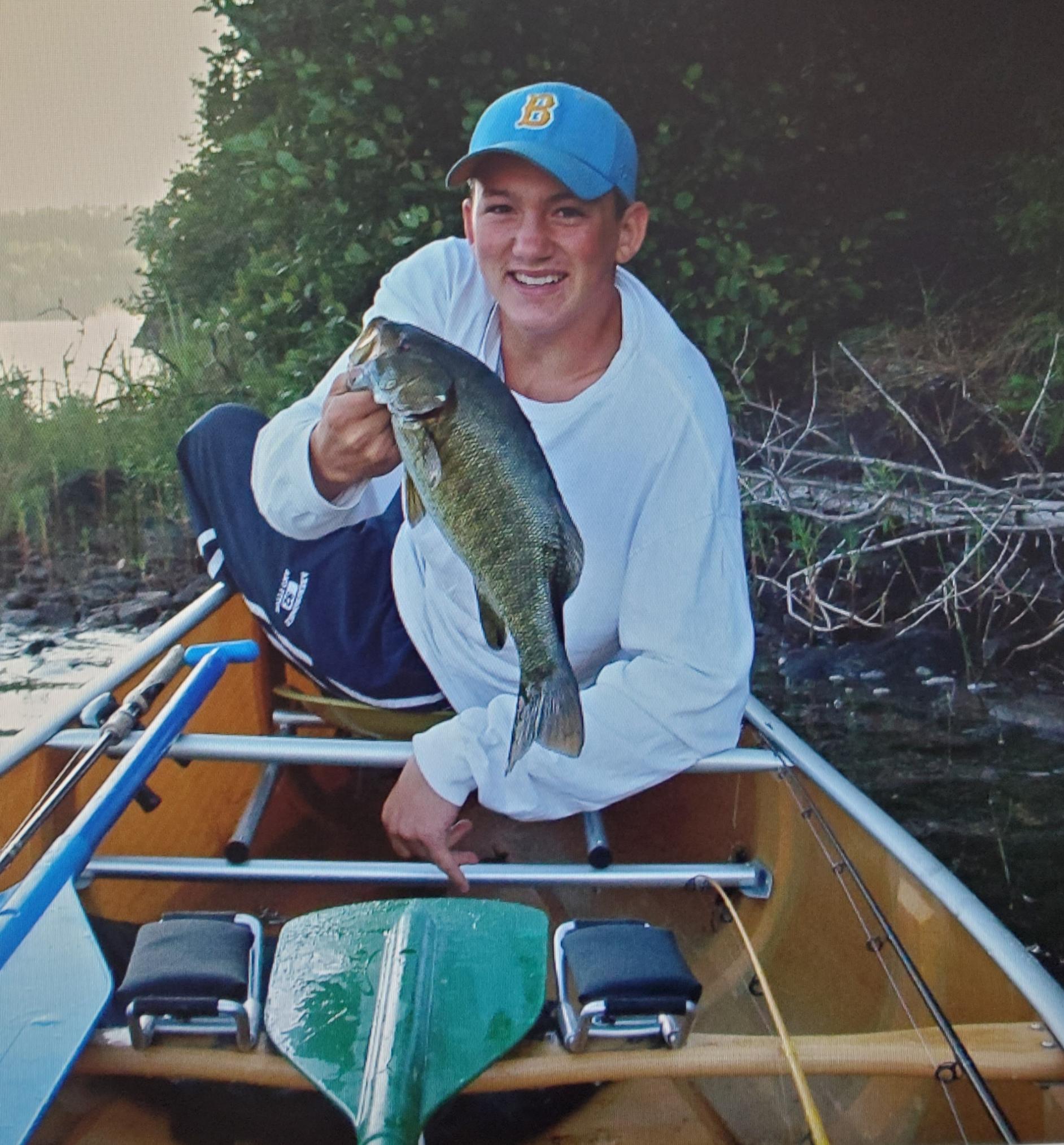