Trip Type: Paddling Canoe
Entry Date: 05/22/2020
Entry & Exit Point: Sawbill Lake (EP 38)
Number of Days: 4
Group Size: 4
Trip Introduction:
The combination of shutdowns and long winter meant we were itching to get out and social distance in the woods. This looks to be the first annual Memorial Day Trip with coworkers. The original intention was to do the whole Sawbill-Cherokee-Temperances-Burnt/Smoke Loop, but sometimes you find a spot and enjoy what you have.
Discuss Trip: View Discussion Thread (8 messages)
Day 1 of 4
Friday, May 22, 2020

After anxiously waiting to see if the USFS would open up permits, we were overjoyed to head north at four o'clock in the morning. Five hours on the road put us at Sawbill at nine, where we navigated pandemic protocols to get our canoes and gear on the water by ten. The weather was looking amazing for an early trip, but we had to wait at the landing while a few other groups put in and we tried to stay apart.

One group, hauling their gear in some nice backpacking gear that made the canoe a bit tippy, loaded into their canoe and called their yellow lab to jump in. He did, physics went to work, and the canoe deposited gear, dog, and canoeists into Sawbill Lake. Frustrated and embarrassed, the group gathered their wet gear and furry companion and tried again (successfully this time).

After the first few months of a tough 2020, it was magical to be on the water leisurely paddling north on Sawbill while birds sang, eagles soared. waves lapped, and paddles dipped. While I've rented from Sawbill before, I've never put in here. It's a lovely, long lake but the campsites were largely full and our journey included a few portages and hopefully a bit more solitude.

After getting a bit turned around in the island maze that is the north end of Sawbill, we were on the small creeks and ponds leading into Cherokee. Cherokee Creek in particular was beautiful. In fact, everything is more beautiful on the first trip of the year when the sun is shining in May, even with a steady flow of traffic including a group of 20-year old guys hauling everything loose in Yeti coolers ("The Yeti Boys"). We were single portaging and left them behind, then turned west after entering Cherokee lake and claimed the second site west of the portage on the south shore, a gorgeous bluff with a killer view. The landing is a bit rough, either scrambling on steep slippery rocks or scrambling up a tight gorge on the backside, but the site is worth it.

Two members of our group were new to the Boundary Waters. This would be an ideal place to introduce them to the glories of this wilderness area. As the wind picked up a bit, I went out fishing with Caleb. This was the first trip I've ever brought a fish finder and Caleb landed a pike and a nice laker after we marked them between the island and the shore. Unfortunately, the only action I got was losing my favorite lure, the beloved firetiger Rippin' Rap. Thankfully, they make more and I'm well stocked for future trips.

Back at camp, the gnats were as bad as I've experienced. Our headsets kept them at bay while we loafed around, enjoyed the sun and the view, and set up camp. It was Joe's birthday and he threw ribeyes on the grill for supper. BW surf and turf of lake trout and ribeyes with a side of rice is about as good as it gets.

It was a great first day of the trip and of the 2020 season, tampered only by Dan's Whisperlite failing and our only fuel source being the forest. There are worse problems. ~Sawbill Lake, Ada Lake, Skoop Lake, Cherokee Lake 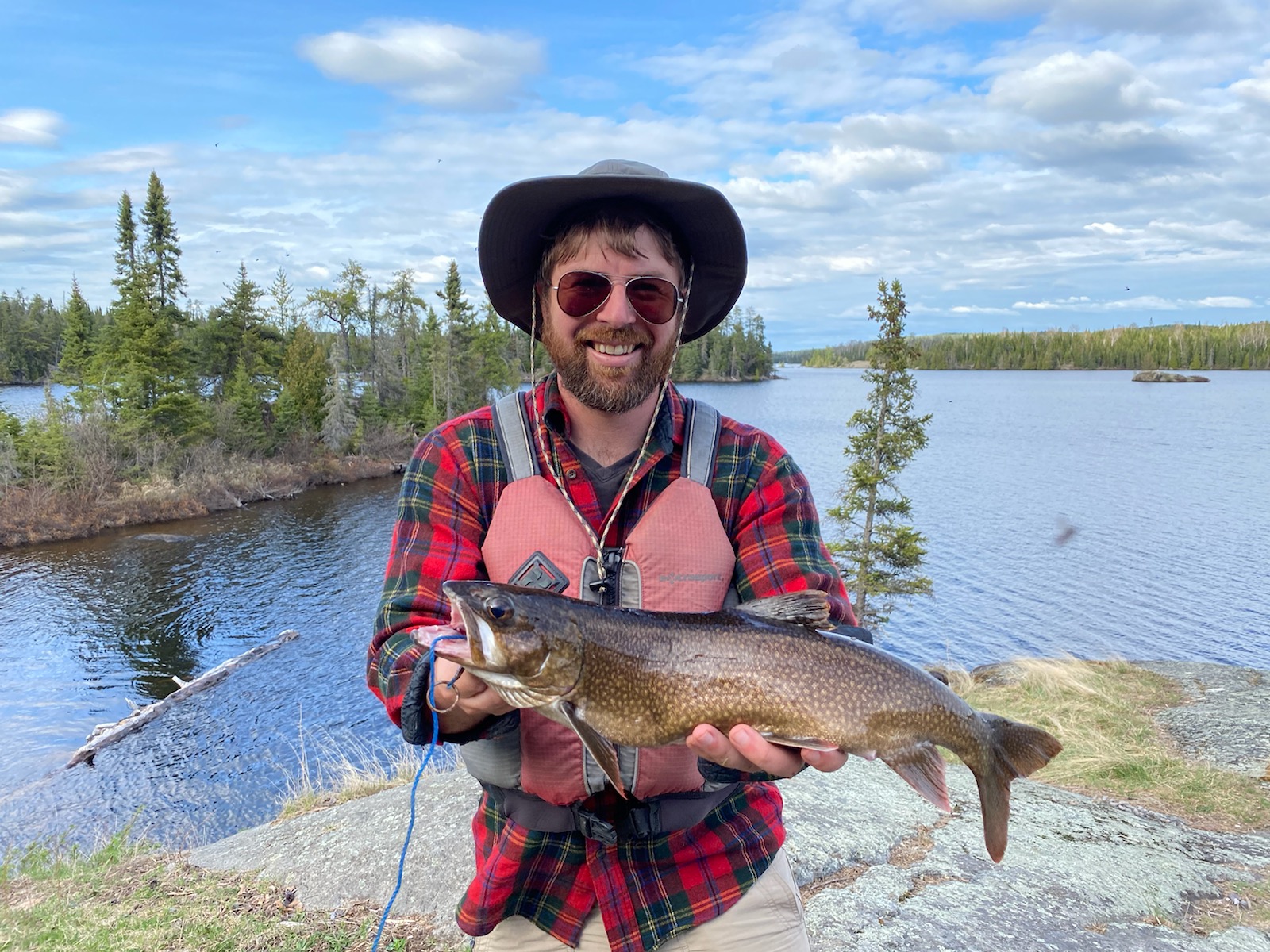 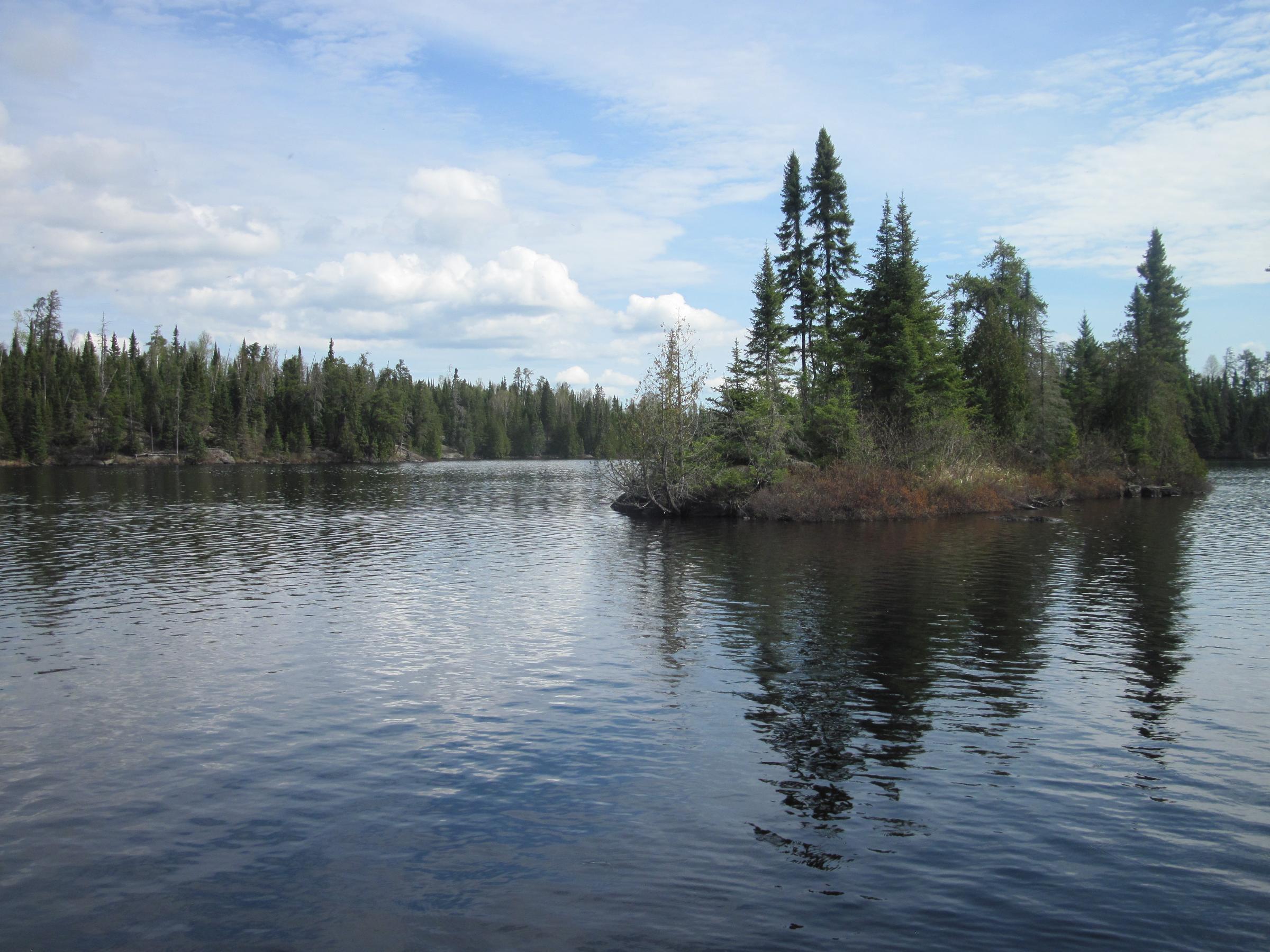