Trip Type: Paddling Canoe
Entry Date: 08/21/2020
Entry & Exit Point: Moose Lake (EP 25)
Number of Days: 7
Group Size: 4
Trip Introduction:
I read a book about the Boundary Waters maybe 40 years ago and always wanted to check it out. Then at a family get together, one of my cousins mentioned that they went on a trip there. My ears immediately picked up and I asked for details. It was my cousin Martin with who I have gone on backpacking and ski trips when we were younger. It's been many years since we did any adventures as new families and jobs kept us busy on our sides of the country. Me in California and he in Virginia. We ended the conversation with me saying "if you're going again, Call Me!" to which he replied " Oh, I'm going again!" So in Nov of '19 I got a call. I said "Sign me up" So Thursday afternoon we all met at Duluth airport. The participation evolved and ended up with four "old" guys 57-60. Three Brothers from the East, Martin, Steve and Bill and one cousin from the West (Me). Two had been on the trip before as first timers and they had the experience. Bill and I we both newbies and did not know what to expect. We somehow worked it out that we all arrived close together and drove up to Ely in the rented car. First stop was the brewery for beer and dinner. Then on to the outfitter to spend the night. We checked in then started going through our gear. Gangplank fever made me too excited to sleep but finally did. Hey I'm still on Pacific time!
Discuss Trip: View Discussion Thread (6 messages)
Day 1 of 7

Friday, August 21, 2020 We did our orientation as we had breakfast then went and finished packing. Cloudy morning with no wind. 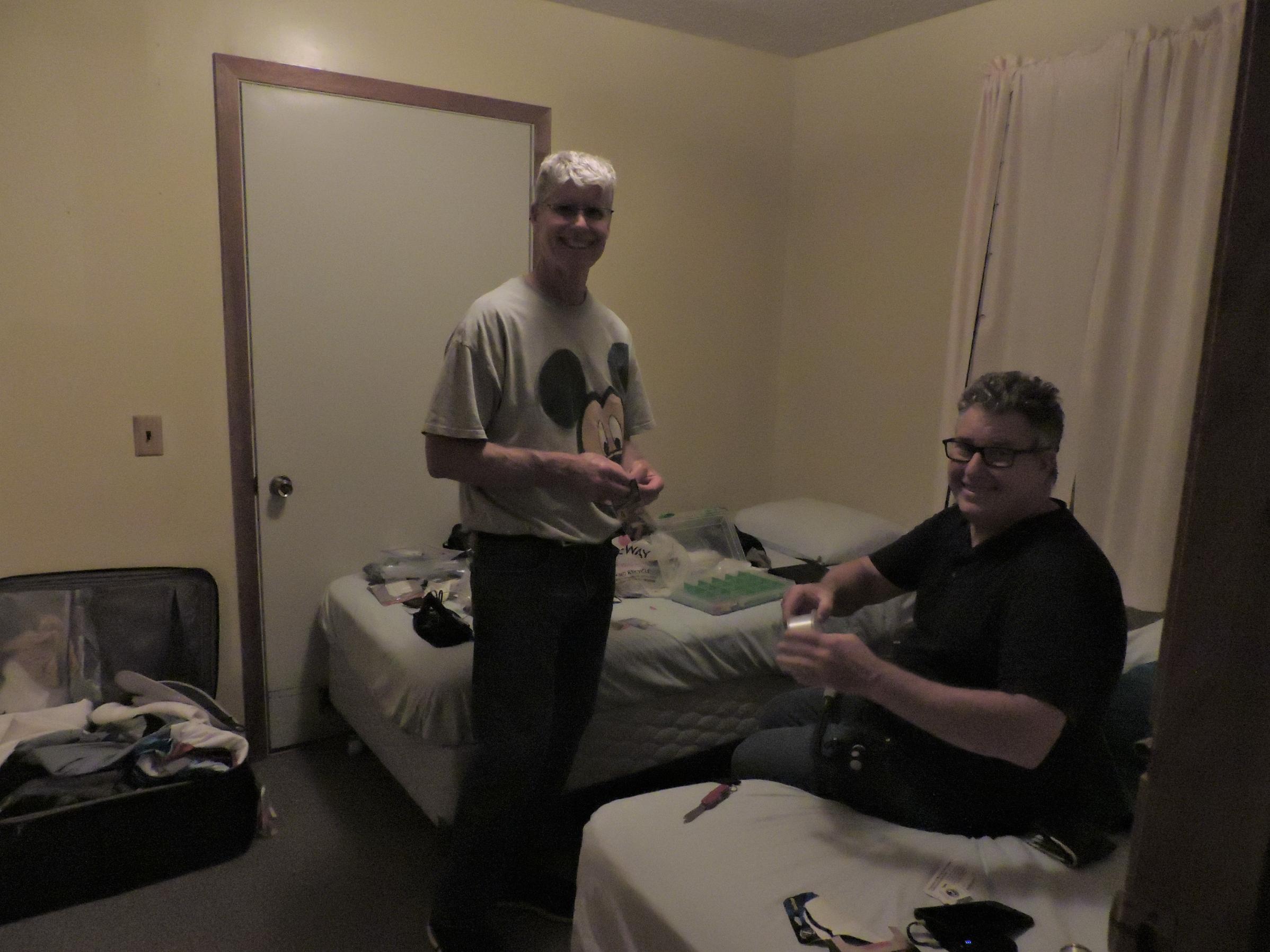 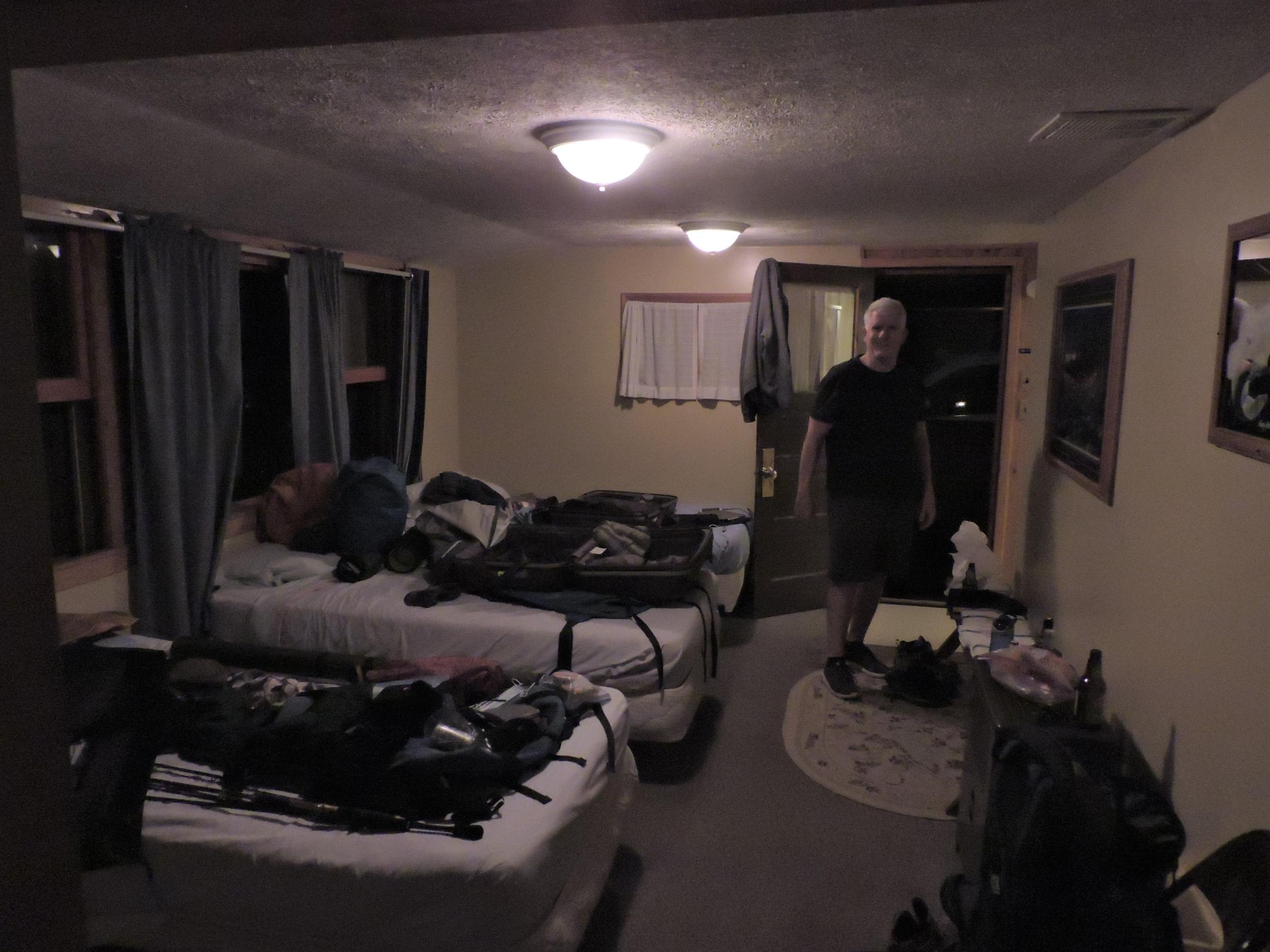 Apparently it had rained the day before but it wasn’t forecast for today. Loaded up and got to Moose Lake around 10:30. Disembarked from our tow to Indian portage around 11:30. Our first portage! Hey this portage thing is no problem ( 5 rods) 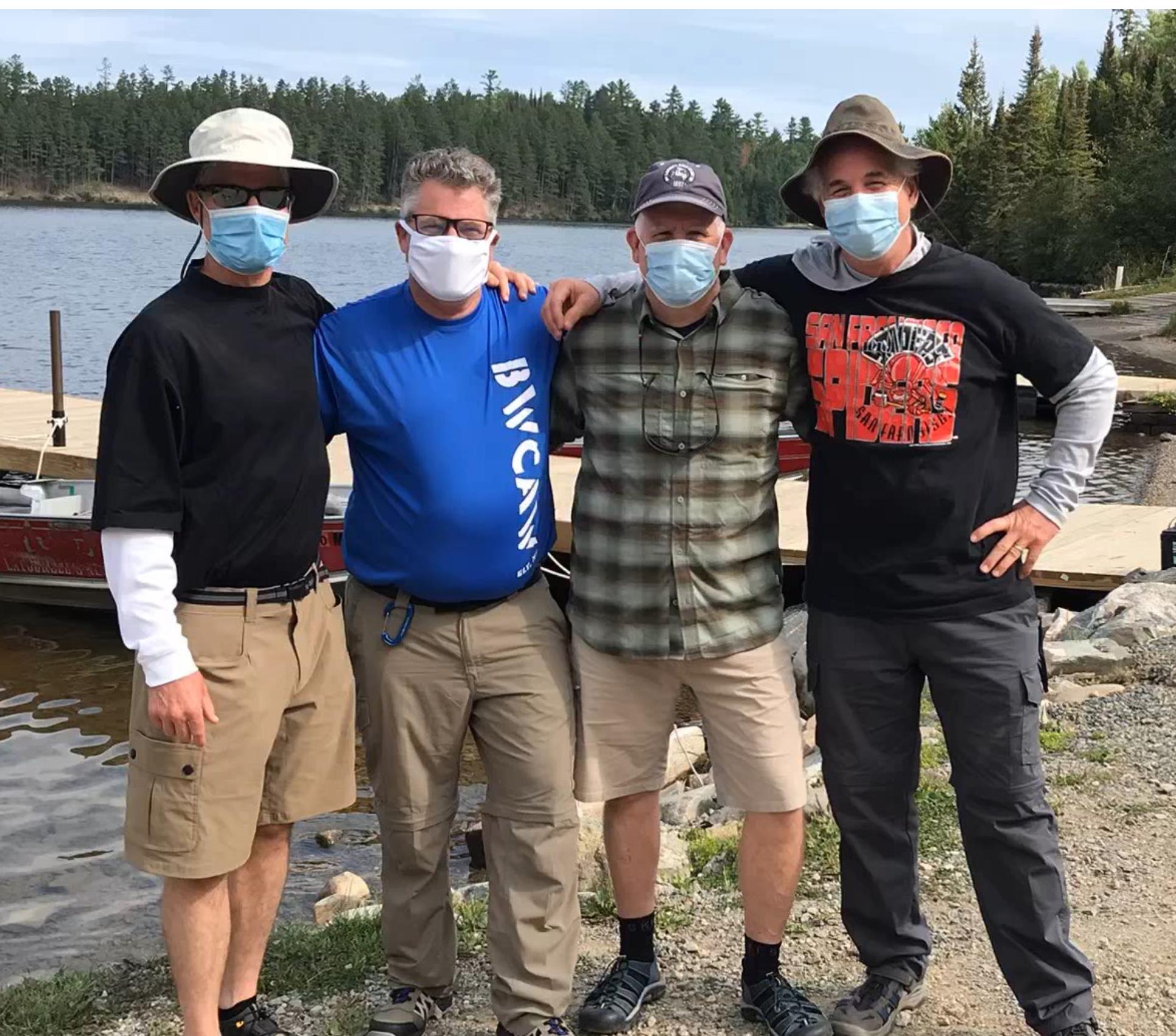 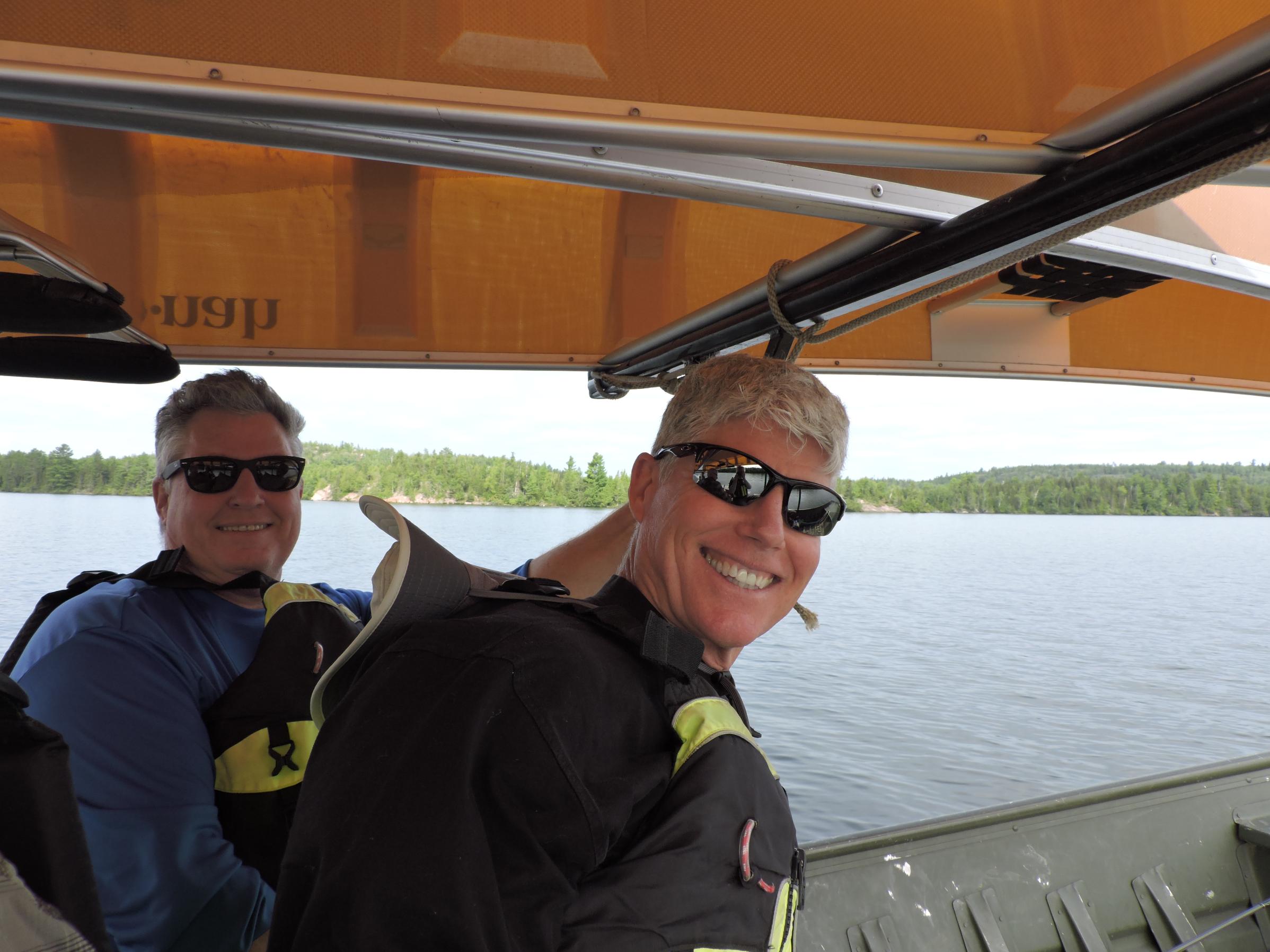 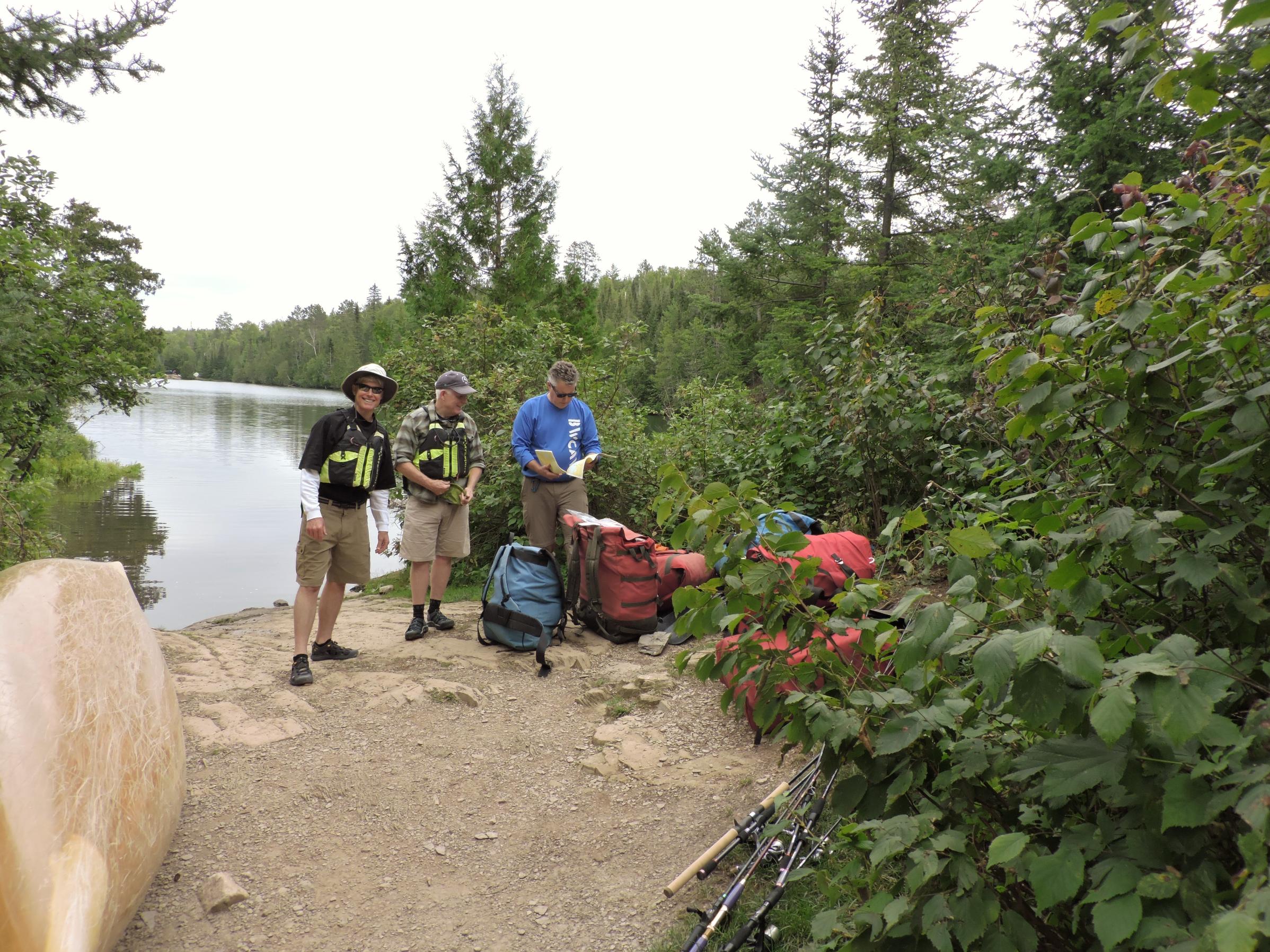 We headed east on Birch Lake with a cloudy sky and mild temps. We planned to make four portages to Knife lake and find a nice site near Robbins Island. A 40, 25, 15, and a 75 rod. All were pretty level and easy walking. We portaged to Carp lake and stopped to eat a quick lunch. Then got loaded to go. As we put in the last of the gear, Another group showed up behind us and they looked like they were in a hurry. We figured it was getting late and so we better hurry to find a good campsite (before they got it) The race was on. We had a little trouble finding the portage out of Carp and they almost caught us. We hustled our gear across the portage and crossed Seed Lake to Big Knife portage. The other party followed closely behind. 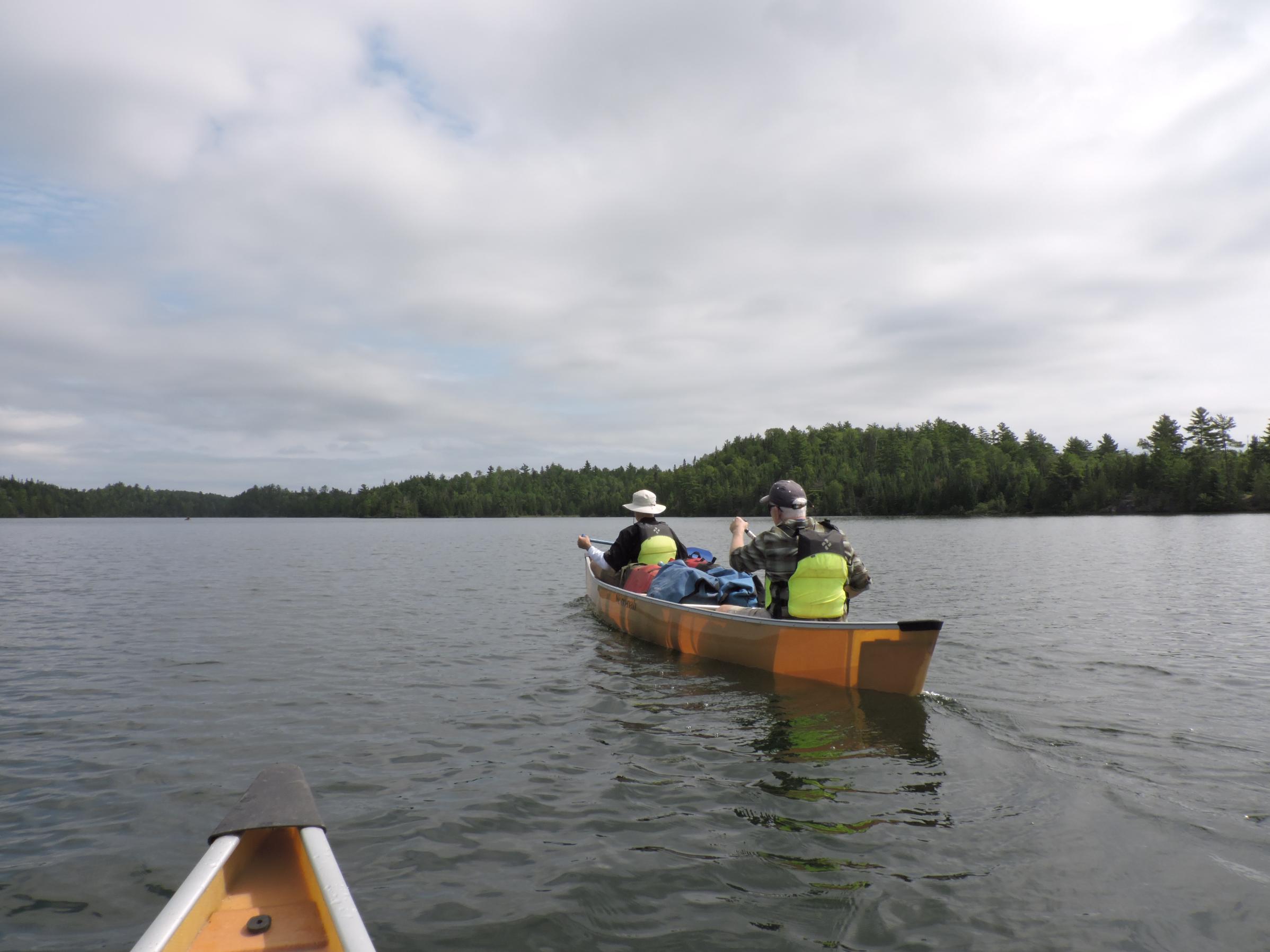 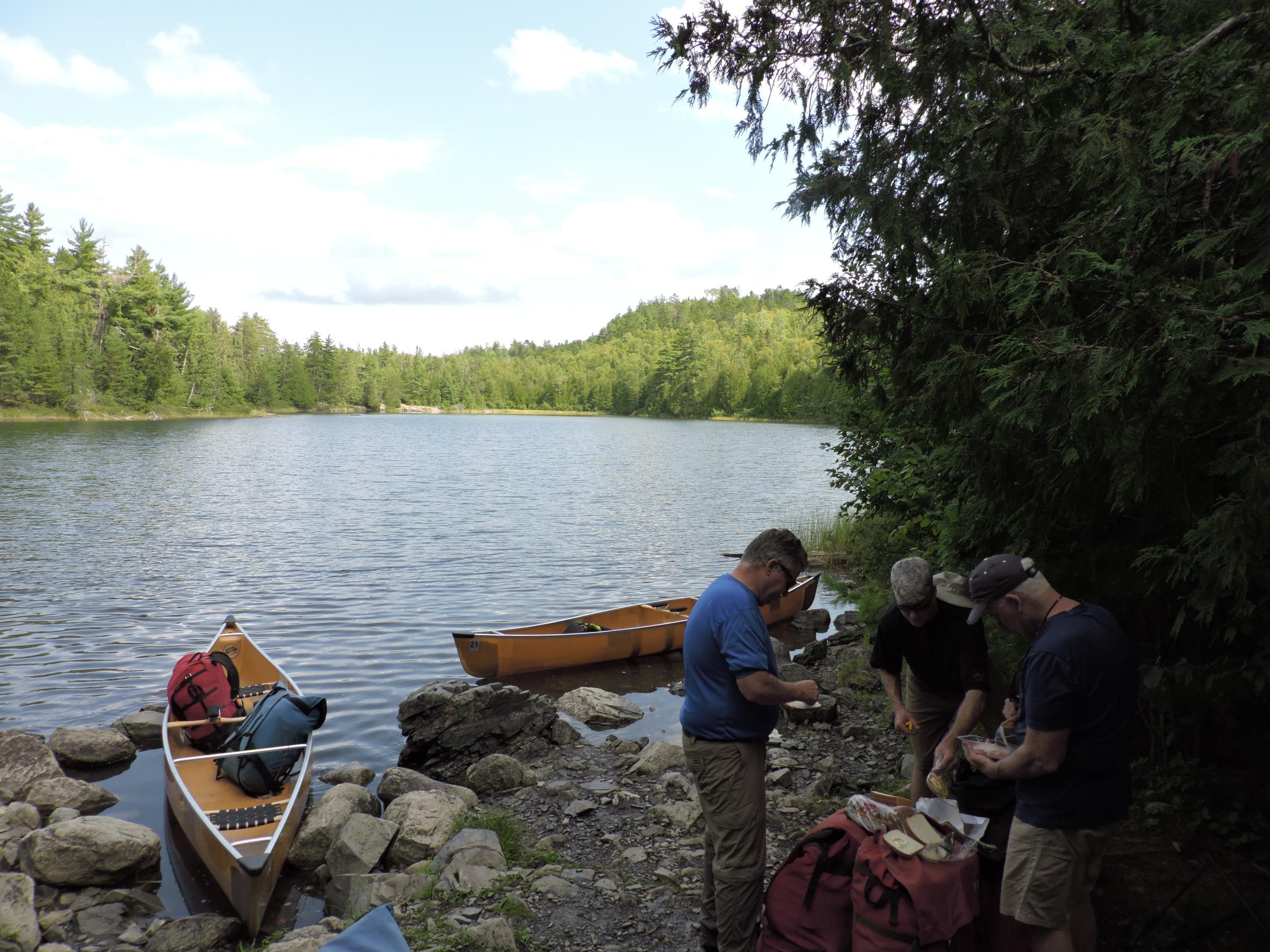 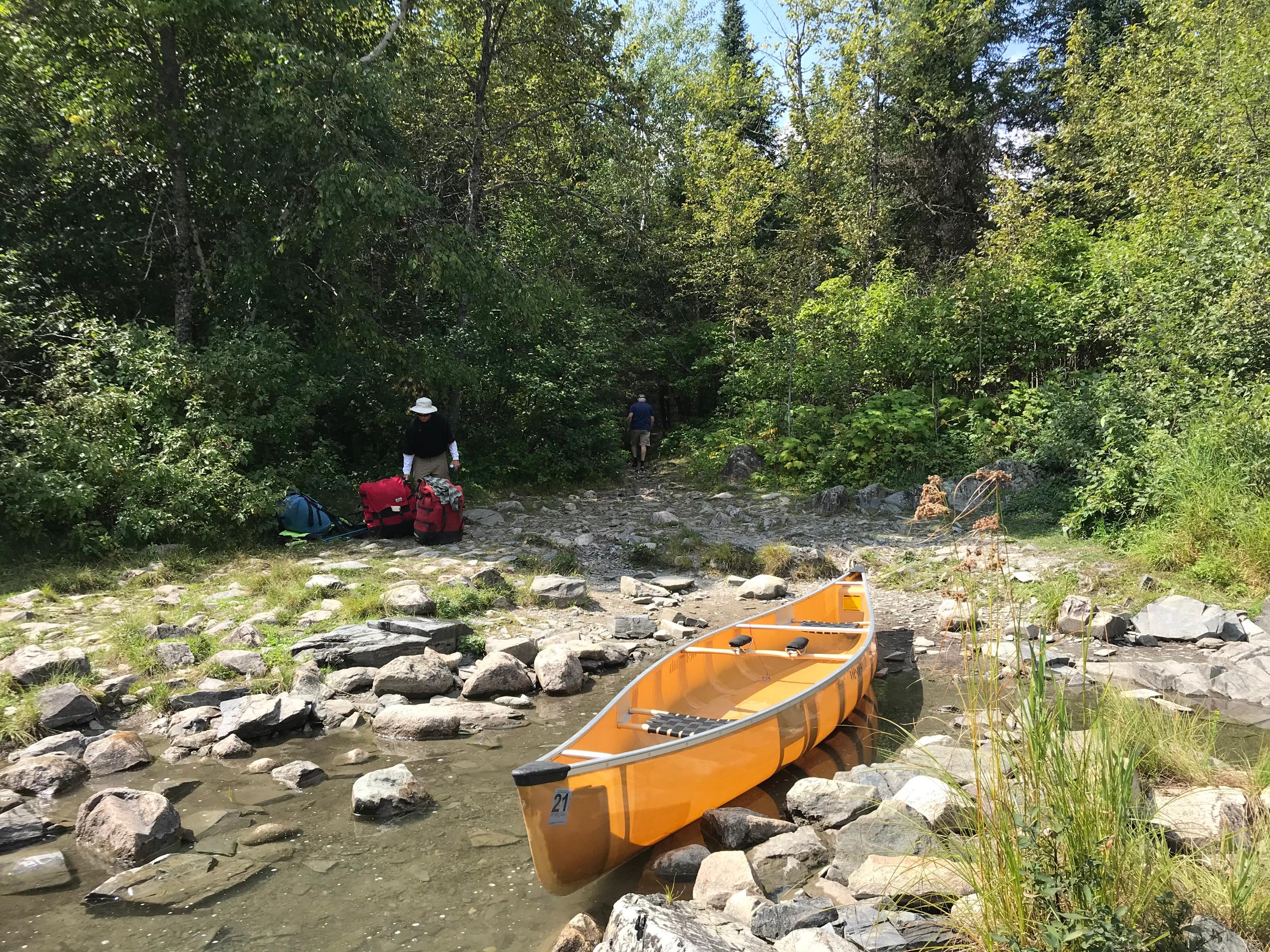 This was the long portage of the day and we have been doing double portaging all day. But we knocked it out and did not see the other party again. They looked pretty beat from the chase. Chalk one up for the old guys! Apparently we are not wise enough. A 11:30 start at Indian portage means a late arrival at Knife. All campsites we passed were occupied and it was closing in on 5 PM. Then according to the map, there was a camp right where there was a break in the trees. Poor landing and only two tent sites. very bushy and no shore line trial. In fact the only trail was the one to the latrine! Camp #1250
I took a deep breath and felt great to be out camping again! We started setting our shelter that was two "4" man tents, two people per tent. Steve went to set up in one spot and I began to unpack the tent for the other. Only to find that no tent, the bag only contained a ground cloth, some poles and the rain fly, no tent! Okay so our plan was that Martin brought a War bonnet hammock set up. Steve and Bill had lightweight camp cots to fit in one tent. And I had the other tent to myself with four ThermOrests. Well it was three in the tent that night because it was moist and the mosquitoes were out. We set up and had our steak diners while drank our cocktails.
Always wanting to improve our firepit, I threw a boulder towards the fire grate. It bounced once, took a hard left turn, and punctured our 1 gallon can of camp fuel! Arrggg. I was able to lay it on it's side and it stopped leaking. We'll deal with it tomorrow morning after we empty our boda bags of whiskey and scotch. Then to cap off the day, I nearly slice off the very tip of my finger cutting a tomato. First tip , always bring a roll of waterproof adhesive medical tape. Almost better than stiches! 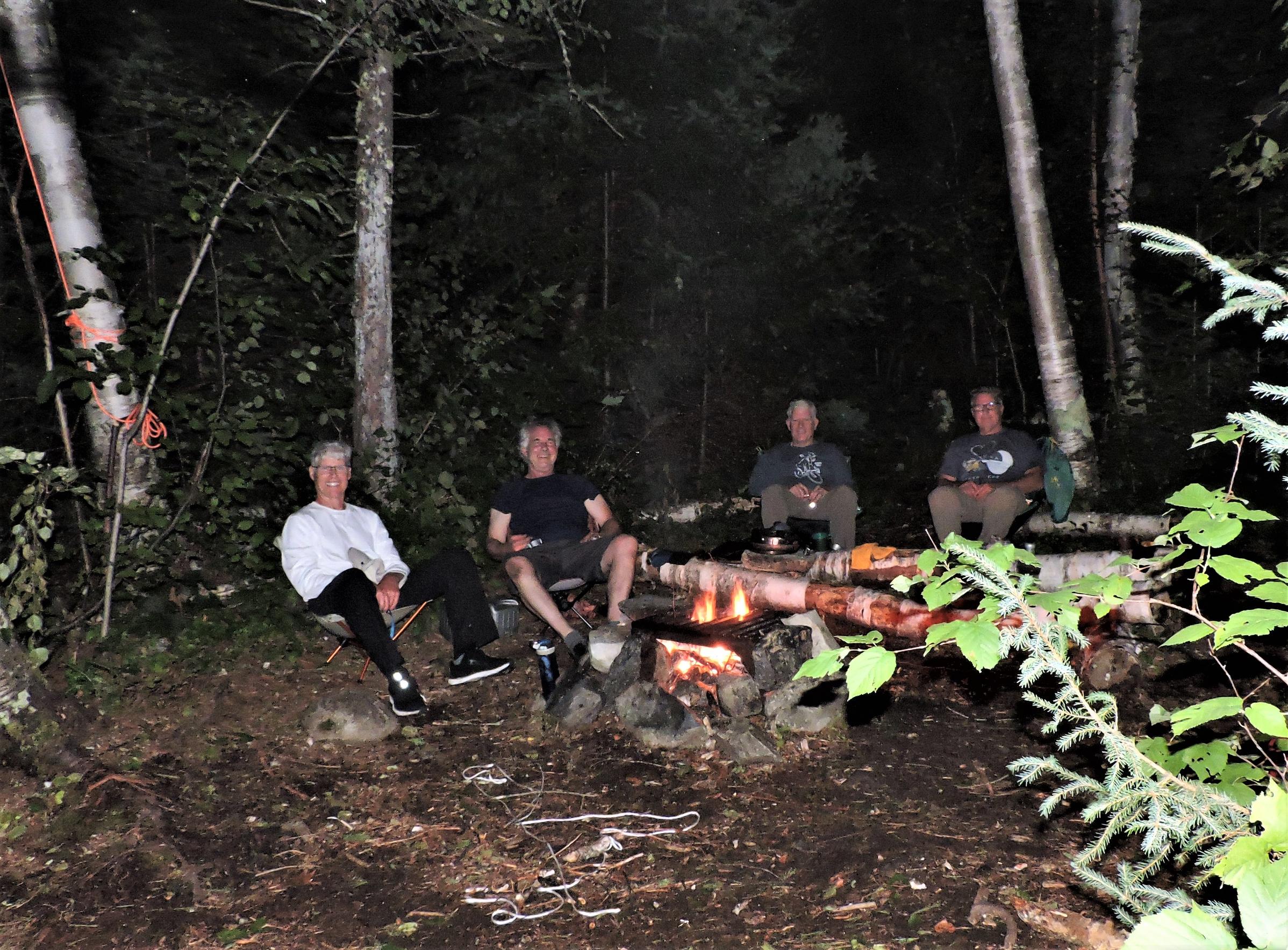 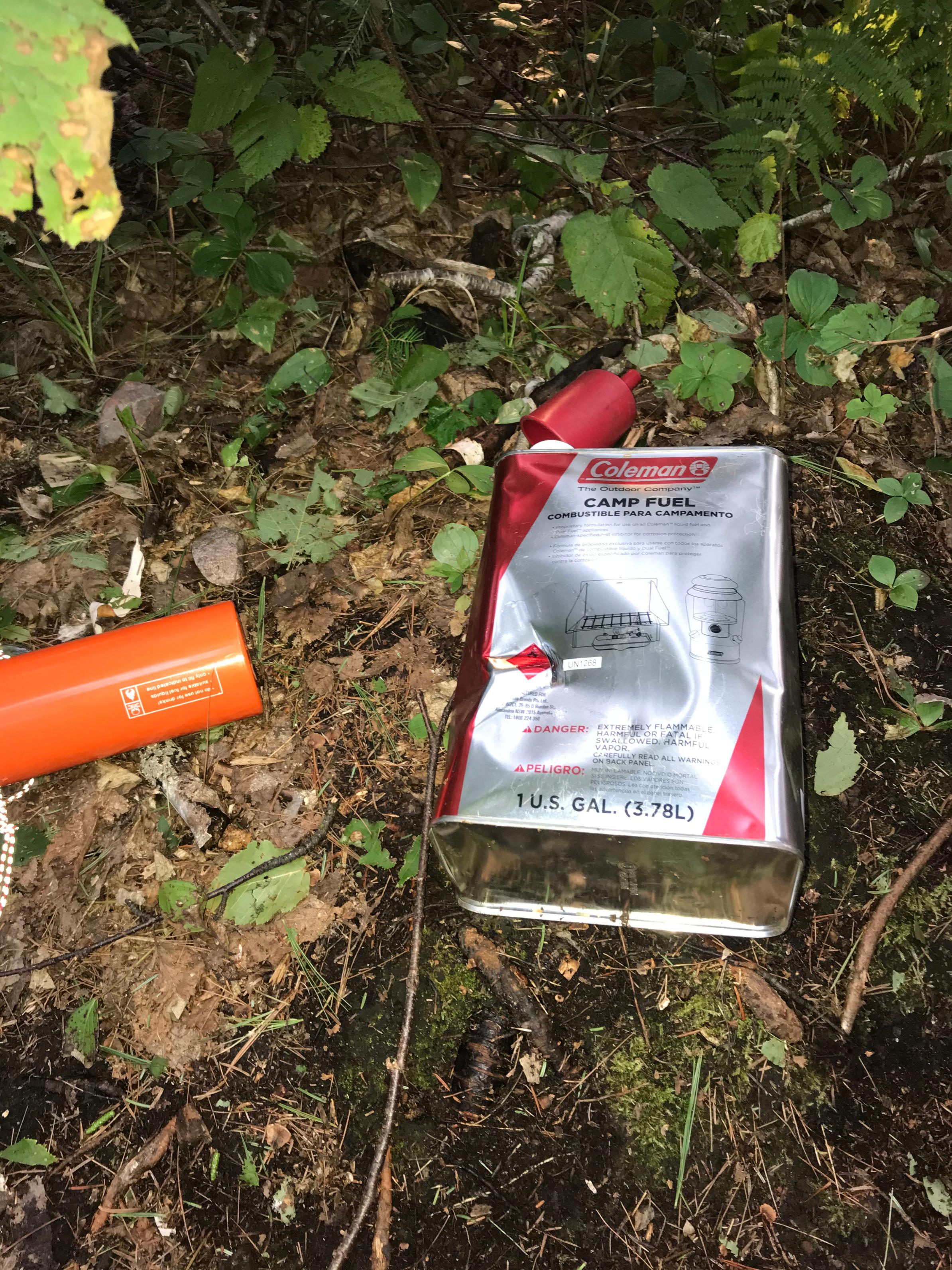