Trip Type: Paddling Canoe
Entry Date: 06/13/2020
Entry & Exit Point: Little Indian Sioux River (north) (EP 14)
Number of Days: 7
Group Size: 3
Trip Introduction:
We arrived in Ely June 12, late in the afternoon on a nice crisp day. I have been going into Ely since I was apx. 8 years old and have NEVER seen it so deserted! Nice to see places open, but broke my heart! I was just glad to be here with my two sons, Andrew 34 and Stephen 29. This was to be their 4th canoe trip and my 10th. We have always gone to Quetico but this year was different and we were not to be disappointed. We checked in at Ely Motel and went to get our canoes and phone from Canoe Country Outfitters. We have used them a few times and they have ALWAYS been very accommodating to us. After dinner at Ely Steak House we turned in.
Discuss Trip: View Discussion Thread (3 messages)
Day 1 of 7
Saturday, June 13, 2020 Woke up a little before the sun. Made some coffee and got moving. Driving up the Echo Trail road on such a typical Minnesota morning, 29 degrees, sunny, green and quiet. Excitement grew as we got closer to EP 14, the Little Indian Sioux River North. Found a spot right across from the start of the portage among apx. 30-40 cars and trucks. A little worried about the number of paddlers we would find out there as this was new territory for us but hey, it is in canoe country and not the city! Unloaded the gear and the boys took off with the canoes as I grabbed the food barrel and started down the trail. Once we had everything down by the river we met a group of guys coming off already. They were from Chicago area and made a point to exclaim about our amount of gear. We do not travel light compared to most, but we like our comfort. We do double portage but also base camp so once we are settled, we are settled in for the week. After letting them get out and up the portage we loaded up our 2 canoes and headed out. Light wind, sun, cool (apx. 38 degrees) but what a time to be alive!!! The first portage is a little downhill, rocky but not too bad, waiting a few times for different groups to unload and pass us, or to get loaded and pass us, ha. We were up here for the time together in the country and not to speed through. A few families were out, both with 2 children and dogs. Very nice groups, so nice to see this. Dogs were also on leashes. Finally got back to paddling up river and into Upper Pauness, had to go through many reeds as we were cutting the corner to take the shorter of the 2 portages available but got there just fine. Portage to Lower Pauness is a short, downhill walk that takes longer to unload and load canoes then to portage, esp. as I had to keep talking Andrew out of “shooting the rapids” here! Short paddle and a short chat with a few guys on shore asking where we were heading and helped us find the portage to Shell, which was quite the doozy for me, not so much for the boys. Not bad really, just hitting that beaver pond half way through and have to load and unload again was not fun, esp. with the portage being fairly busy. Meet another group with 2 dads and their sons, (again great to see!) and waited for them to maneuver the pond as I caught my breathe and the boys went back for a second trip of gear. Got to Shell pretty quickly after that. Little Shell portage was a breeze, did not even unload the solo canoe, the boys each just grabbed an end and whoosh walked up the short hill! Ever since then we have had a code for how difficult something might be, like “it will be Shell hard” or “do not worry, it will be Little Shell easy”, LOL. Paddled through Little Shell in about 10 minutes and into Lynx and found the first site taken, saw the next two also filled and hoped the one closest to Heritage portage would be available, it was #65 and was open. Got to this site around 3pm. Set up camp and had our traditional ribeye steak and potatoes first night dinner. Nice site, a few spots for tents, nice open fire area and on a little point to have the breezes keep away the bugs. The cove or bay behind the site was filled with smallmouth and had a nice rock shelf that probably held walleye down deep, but too much wind kept us from being able to do such type of fishing. 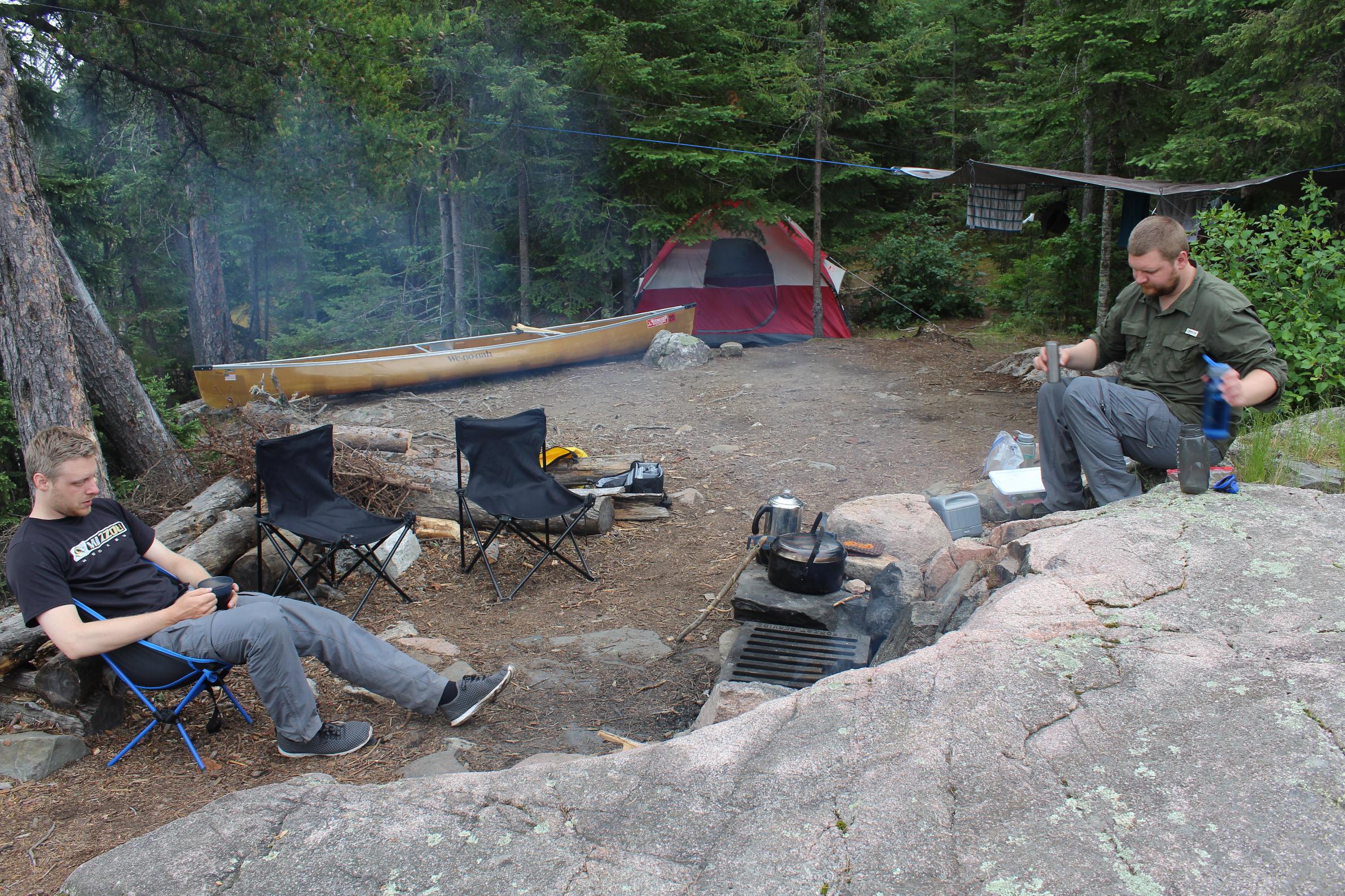 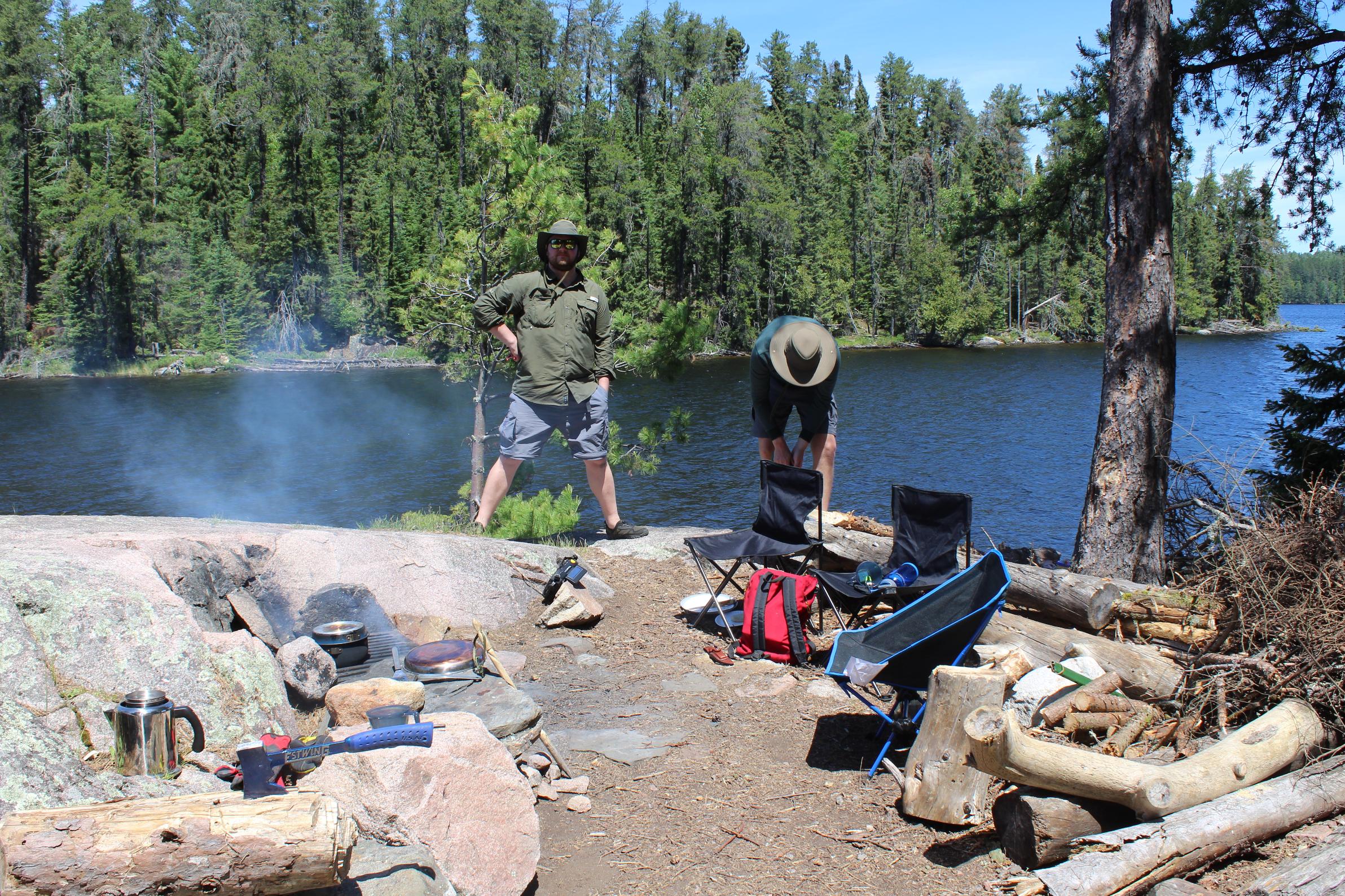