(No) Disappointment in August
by snakecharmer

Trip Type: Paddling Canoe
Entry Date: 08/25/2006
Entry & Exit Point: Snowbank Lake (EP 27)
Number of Days: 4
Group Size: 2
Trip Introduction:
This trip was hatched five years ago when my son Ben, then eight, asked me when HE could go to the Boundary Waters. “When you're twelve” I told him. He turned thirteen on August 21st. So back in February I went online and secured a permit for EP27. The plan was for a four day/three night trip base camping on Disappointment Lake. Beyond that, things were pretty open. We both love to fish, so I suspected a good share of our time would be spent doing just that. Maybe we would do a day trip. Maybe we would just kick around camp. We would pretty much wing it. I had already done an eight day Quetico marathon loop in June. This was going to be a relaxing trip.
Day 1 of 4
Day 1 – August 25, 2006

We hit the road early Friday about 1am and headed for Ely. I wanted to get to Ely by 6am when the permit station opened. There had been several posts on BWCA.com regarding the critical shortage of open campsites on Disappoint due to overcrowding. Hopefully our early start would be rewarded.

Arriving in Ely at 5:30am, we stopped at the Holiday station and picked up a couple of sausage and egg muffins. Driving up to the permit station turnoff, we discovered another car already waiting at the gate. Was this a sign of things to come? After a short wait and THE MOVIE, we were issued our permit. A quick stop for leeches at Skubes, and we were off to the Snowbank EP.

After unloading our gear at the canoe landing, we saw another vehicle pull up. It was a group of six, three adult men and three older teenage boys. This was exactly what I didn’t want – a campsite race. But the race was on! We had about a fifteen minute head start on the other group, but being that they had more muscle, I knew it would be close at the portage. We crossed Snowbank Lake under overcast skies with a pretty stiff wind in our faces. The waves at times broke over the sides of the canoe and sprayed us. It looked and felt like it could rain at any time. We made it to the 140 rod portage five minutes ahead of the other group. We double portaged without incident. As we were pushing off from shore on the Disappointment side, a man and woman were coming off in a canoe. We spoke briefly and they kindly gave us the location of a campsite on the north end of the lake that they had just vacated. We wished them well and continued on our way. We soon came across another group of three canoes headed towards the Snowbank portage. They too shared the location of the site they had just left. Two open campsites, vacated in the last hour…things were looking pretty good.

The closest open site, just vacated by the group of three canoes, had already been claimed. It was the south island campsite. A group was unloading as we paddled by. It now started to rain. The raingear came out and we pushed on. There was an open site on a peninsula on the east shore, but we opted to pass on it. We headed west to the site the couple had recommended and found it available. And it was a gem! The rain had all but stopped by this time. The canoe was unloaded and we setup camp. After a quick lunch of venison sausage on dinner buns, the food pack was hung. Then we both lay down in the tent and took a much needed nap.

When we woke up, we took some time to explore the area around our campsite (find the latrine). Then we struck out onto the misty lake to find some active fish. We put our leeches to work at the end of some home-made spinner rigs. I picked up a 28 inch pike. Ben landed a decent largemouth bass. We fished the shorelines close to camp until we got hungry, then headed in for a dinner of macaroni and cheese. That evening we stayed out fishing until almost dark, catching a releasing numerous fish. There would be no campfire tonight. We were both pretty beat when we got back to camp and went right to bed. 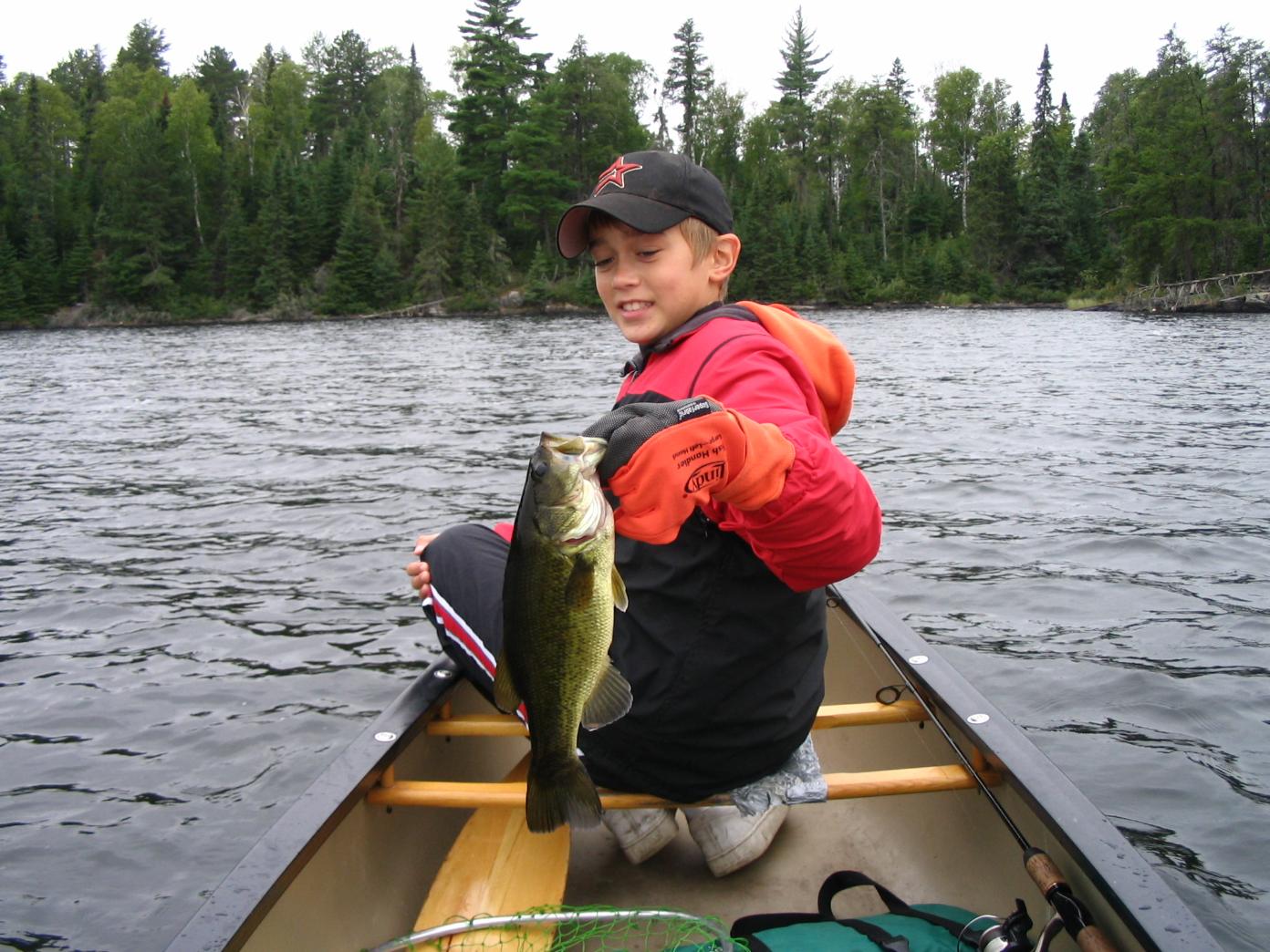