Trip Type: Paddling Canoe
Entry Date: 07/19/2006
Entry & Exit Point: Kawishiwi Lake (EP 37)
Number of Days: 10
Group Size: 3
Trip Introduction:
Originally, our trip was supposed to be a loop starting at Hog Creek and ending at Kawishiwi Lake. I spent much of the winter planning the route and convinced two good friends, Drew and Bryce, to come along for the trip. We had everything set to go, but the Turtle Lake Fire forced us to change our plans the day before our trip. This was the first long trip any of us had done, but we were all pumped about heading into the Boundary Waters for 10 days. We left the Twin Cities on the 18th late in the morning so we could get to the Tofte Ranger Station and sort out our options that afternoon. After stopping at Betty's Pies, we got to Tofte and the rangers confirmed that our planned trip wasn't an option because of the closed portages along the Isabella River. Without many options, we decided to start our trip at the Kawishiwi River entry point and improvise from there. From there, we could cover the last third of our trip to Lake Insula and then figure something out from there. Then we headed over to Sawtooth Outfitters, where we were given a brand new Souris River Quetico 18.5 three-seater for our trip. After strapping the canoe onto my VW Golf (quite a site), we got some dinner in Tofte and headed up to the Kawishiwi River Campground to spend the night.
Day 1 of 10
Wednesday, July 19, 2006

We put in later then planned at about 9 and headed across Kawishiwi Lake. Our only plan at this point was to head to Lake Insula in the first three days, then play it by ear. The sun was out and the wind was down so we made good time across Kawishiwi Lake. After crossing the beaver damn about where the Kawishiwi leaves the lake, we made the mistake of getting back into the canoe backwards and were unable to turn around the canoe thanks to the low water levels and the narrow width of the river. So, instead of getting back out and turning the canoe around, we paddled backwards for about a quarter of a mile. We were dragging over mud most of the way to Square Lake. The portage from Square back to the Kawishiwi was dried up at the landing and we had to carry an extra 20-30 rods before putting the canoe back in the water. The next portage wasn't even a half mile later and was an easy carry over some rocks where the river narrowed. From there, the water was low all the way to Kawasachong Lake with two places where we have to get out and walk the canoe because of the water levels. Being on open water was a treat and we enjoyed how fast we could travel on the water with three people paddling. We ate lunch as we waited for a group to cross the 190-rod portage from Kawasachong to Townline, then single-portaged our gear across the long, but fairly easy, portage. Next up was a quick paddle across Townline to the 95-rod portage from Townline to Polly. Again, there were some groups on the portage. The path drops steeply into Polly, making it tricky to descend with a canoe. We decided to stop on Polly after finding the small island campsite open and nice. Bryce and I tried out some fishing in the afternoon, but were unsucessful. We enjoyed from brats and whiskey for dinner, our last real dinner before 9 straight nights of freeze-dried food. 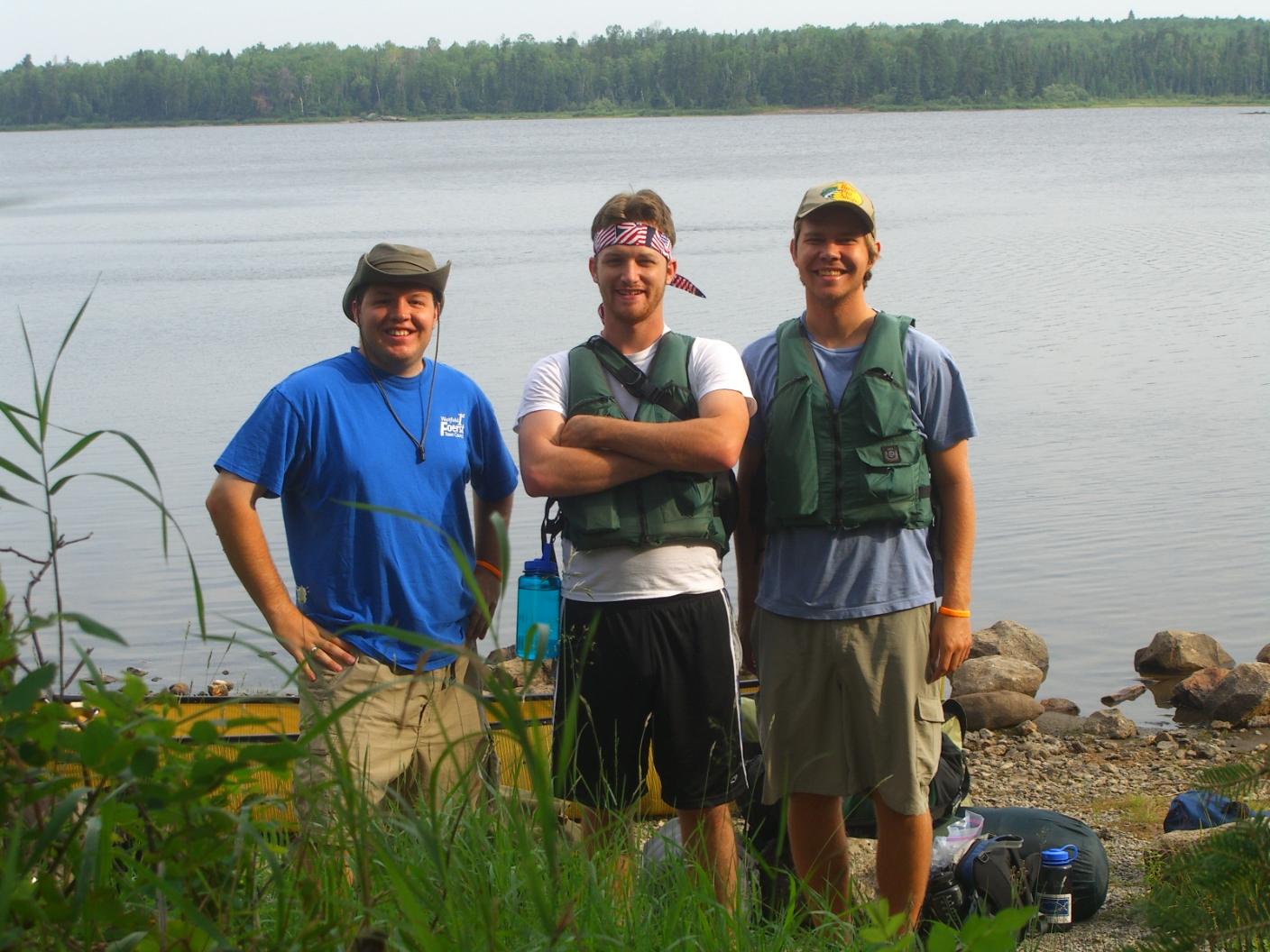