Wind on Snowbank
by paddlinjoe

Trip Type: Paddling Canoe
Entry Date: 10/04/2006
Entry & Exit Point: Snowbank Lake (EP 27)
Number of Days: 5
Group Size: 2
Trip Introduction:
A short trip starting and ending on Snowbank Lake. It was a great trip weather wise, warm and no rain. High temperatures in the 60's, maybe even a day of 70. Very nice temps for October. It was windy, but not an issue on the small lakes, then we got back to Snowbank Lake…
Day 1 of 5
Wednesday, October 04, 2006

Day One (Wednesday): We left the Twin Cities Wednesday morning and arrived at EP 27 Snowbank Lake around 2:00. We had been listening to the Twins vs. A's playoff game on our drive up. They had just gone down 4-2 in game two of the series when we lost the signal 10 minutes before we got to the parking lot.  This was our last time check as I like to leave my watch behind during these trips. I liked adding the extra night by going in the same day as we traveled. We can't count on going very far, but I liked it better than staying in a motel the night before. This also allows us to stay two nights move and stay two nights. While setting up camp isn't that hard, with the shorter days, it's nice to enjoy the effort for more than a couple of daylight hours. It also makes it easier to enjoy what I'd call a Wilderness Pace to the day, instead of trying to keep some artificial schedule.

I'd never been to this area of the BWCAW and was impressed with the floating dock at the entry point. A very light wind was coming in from the north as we paddled Snowbank going from West to East towards the portage taking us to Parent Lake. Oh how things would change by Sunday as far as the wind was concerned. We saw one motorboat on Snowbank, I'd have expected more, but it was the middle of the week.

The nice 80-rod portage from Snowbank took us to Parent Lake. Until a couple of years ago I was quite adamant about single portaging. I've definitely come around to double portaging. When I was younger I loved the challenge of "getting it all over in one shot". It seemed silly to waste time going over the same ground more than once. While none of the portages on our planned route are over 100 rods, these days, we typically double portage. I enjoy the challenges of portaging, but I equally enjoying the un-hampered walk through the woods that is afforded as we go back for our second load.  Since we started double-portaging, I've seen a lot more of canoe country just because I don't have a 16 ½ foot hat on my head all of the time.

A quick paddle across the northwest quarter of circular Parent Lake, another 80-rod portage and we were on Disappointment Lake. Disappointment was our planned destination for the next two nights. While not a large lake it was the largest one we'd be on until we got back around to Snowbank. Disappointment has a couple of good-sized islands as well as a winding nature that provides a good bit of privacy for most it's campsites. We paddled to the northeast corner of the lake to check out the three campsites that are close to the Lake Disappointment Trail. We'd discovered from the previous year's trip that we enjoyed taking a day to hike through the woods vs. always paddling and portaging. This year we picked a location that has some maintained trails. There are trails that go all the way around Snowbank Lake, Lake Disappointment, and one that goes over Disappointment Mountain. Our plan was to do some hiking on Thursday along the hiking trails. Little did we know how fortunate we'd be to have these trails available to us.

After checking out all three northeastern campsites we decided to use the island campsite. We quickly set up camp and began preparing our supper of brats. As the sunset, the nearly full moon began to rise. It was hard to tell when the sun was gone, because it never got dark enough for "night". From the exposed island point where the fire grate sits, we were stunned by the amount of light reflected by the moon. Our shadows were mid-day sharp and we could practically read by the moonlight. I've often enjoyed the depth and number of the stars that can be observed while in the BWCAW. There was not a chance of that on this night, too much moonlight. Taking advantage of the moonlight, we headed out for a late night paddle to float among the few stars that were able to appear in the light night sky.

Item of interest: Chris thought the "flat" log seats around the campfire were really cool. Someone had taken the time to saw or chop the top surface of the logs that make up the "benches" around the campfire. Chris figured that, not only did it provide a flat spot to set things like cups, but it was more comfortable to sit on as it allowed ones weight to be spread over a larger area. What kind of person has the patience and persistence to spend hours flattening a log that will be used for a day or two? 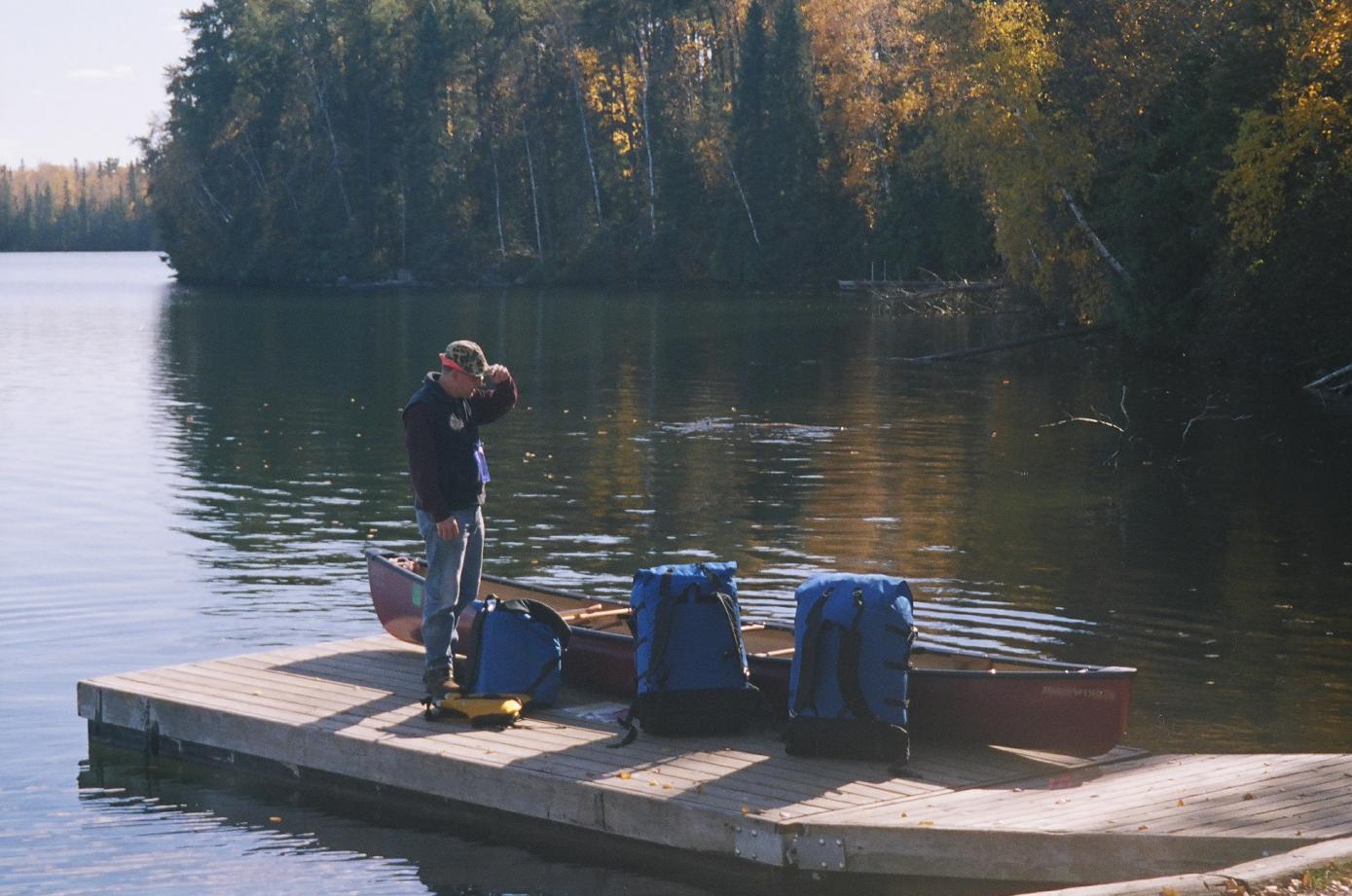 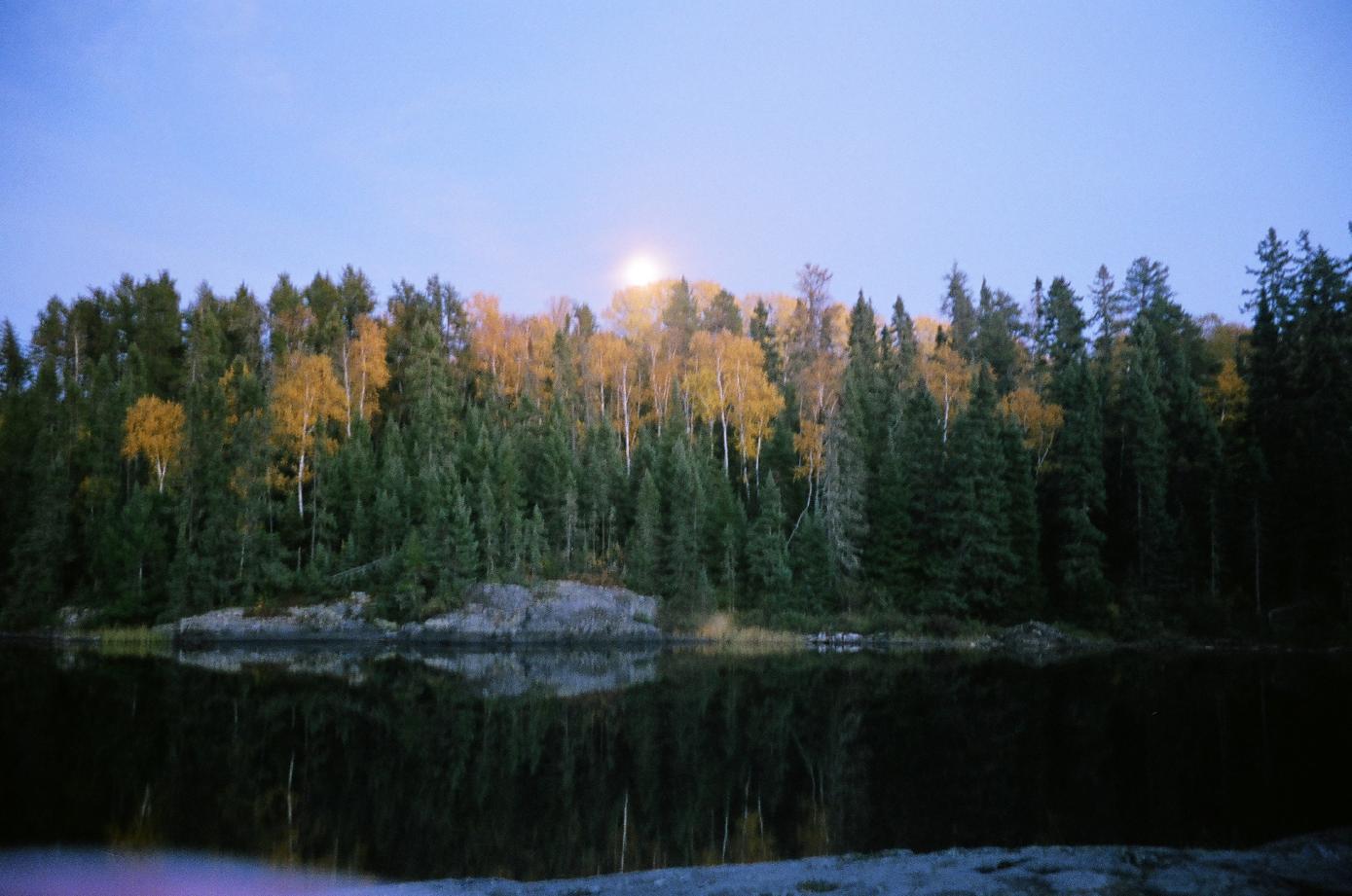