Trip Type: Snowshoeing
Entry Date: 03/08/2007
Entry & Exit Point: North Kawishiwi River (EP 29)
Number of Days: 3
Group Size: 1
Trip Introduction:
Short winter trip into the BWCA
Report
I have been cooped up all winter except for the times that I get out and ice fish. While sitting in my house waiting for the anything to bite, my mind will eventually wonder north. It was one of those nights on Maple Lake that I started thinking about a winter trip.

I picked entry point 29 simply because I entered both west and east of that area last year and missed this section of the river. I also wanted to incorporate winter camping with ice fishing. I had big plans to explore all of the surrounding lakes. Those plans changed...

I left Monticello at 4:30am and made it to Vertin's Cafe for a ham and cheese omelet just after 9:00. Afterwards, I went down a couple blocks and filled up my gas tank and went inside to pay. When I handed the clerk my American Express card she said they don’t take them. I had just put $42.50 in and had $41.00 cash. She gave me a discount for paying with cash and I had enough to cover the bill. I figured I was pretty lucky and went on my way. I had fuel in my belly and truck, what else did I need?

I noticed most of the parking areas that I passed on Fernberg road had been plowed which actually disappointed me a little simply because I had opted to drive my truck instead of my car. The extra gas money looked like it would be wasted. When I got to the Ojibway Lake turn off I saw nothing but snow. I was elated. I pulled up on the floor stick and felt the front wheels engage. I then crawled up the rather long road to the parking lot. At the crest of the hill I saw the parking lot off to the right just a second too late. I paused long enough for the truck to lose momentum. I was stuck. I grabbed the scoop shovel and went to work. Eventually I got back to the far side of the parking lot. I had to dig myself out a total of 3 times getting back there.

I finished off my second Red Bull of the morning and started getting my sled packed up. My intention was to have my dog pull a small homemade sled which contained my backpack. I didn’t really have high expectations, which is why I used a backpack instead of a duffel bag and a real sled. Annie gave me a funny look when I slipped her harness over her head and clipped the [crude]sled to it. I can only imagine what she was thinking. It was a 25lb load after all, not exactly the 1000lb load good ‘ol Buck broke loose in Alaska. 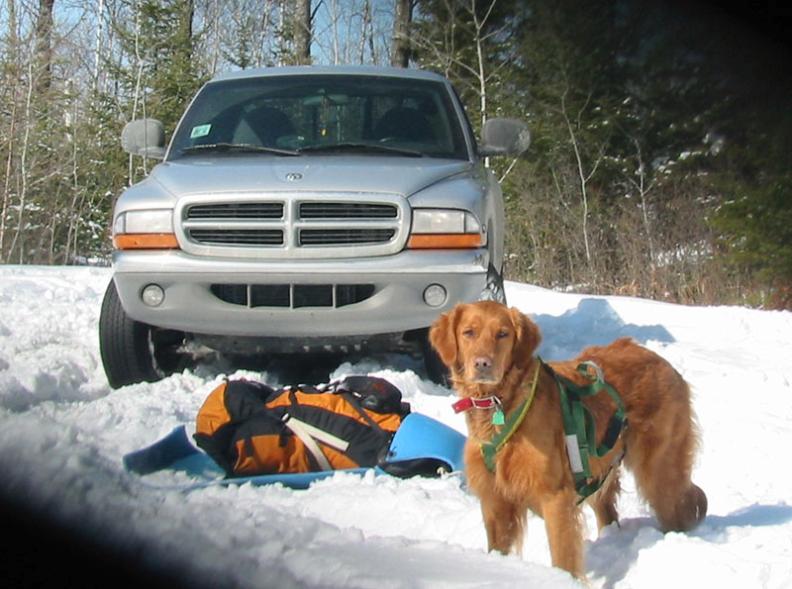 Next thing I knew I was halfway across Ojibway lake with the sled trailing behind me and the backpack securely fastened on my back. Annie was having a great time running out in front of me. On the other side of Ojibway lake, I noticed that I had forgot to put Annie’s little dog boots on. After looking in all my packs I headed back to the truck to get them cussing a little at the oversight. I sure didn’t want to let all that snow get into her paws and crack them up. 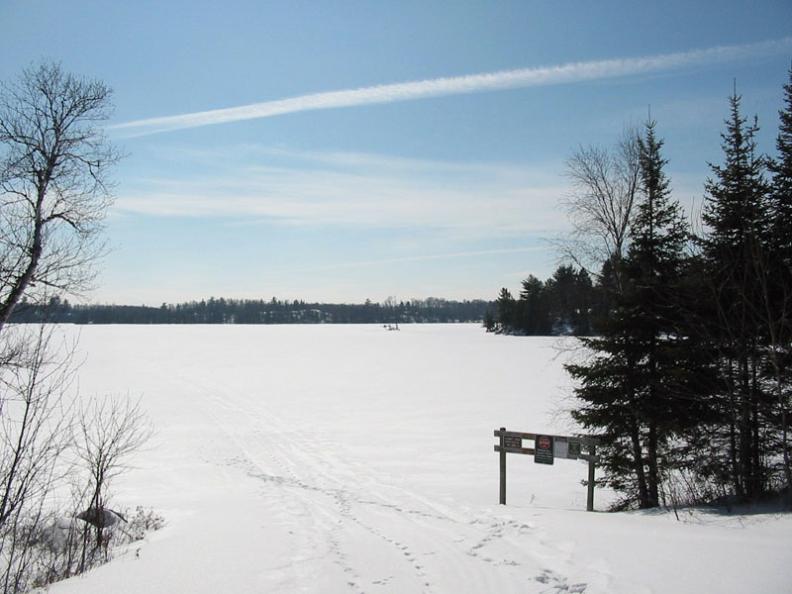 Ojibway is a very nice lake, I very much liked the islands and high points around the lake. I would love to own one of the cabins on that lake. The lake is outside of the BWCA, and there was a snowmobile track that I used most of the way across the lake. It made pulling the sled a little easier.

Next lake was Triangle Lake. I startled 4 deer as I approached an island. They ran across the lake up a rather steep hill and vanished into the snow covered trees. I wished that I was moving that fast. I was beginning to realize that this load that I was hauling across the ice was simply too much. I was starting to feel the effects of the sled’s weight and resistance and I was just getting to the 196 rod out of Triangle lake and onto the river.

The portage had been recently use by someone with skis, a deer and either a dog or wolf- likely a dog with that skier. The snow was deep and I was glad to have had my snowshoes on. At times on that portage I had to grab a tree to prevent the sled from pulling me backwards. It was pretty obvious that I wasn’t going to cover as much area as I had planned to. By the end of the portage I was sweating and tired. I got out my map and decided to look for a place to set up camp. I found a nice sheltered place across the river and headed for it. I had noticed that someone had recently setup camp in the same place. I decided to put my sent in the same spot as theirs since they had left a nice wind block made out of snow. Annie had lost two of those boots that I had went back for earlier, the snow was pretty deep on the river which was protected from the wind. I managed to find one of them but not the other. I figured we may run across it on the way back. 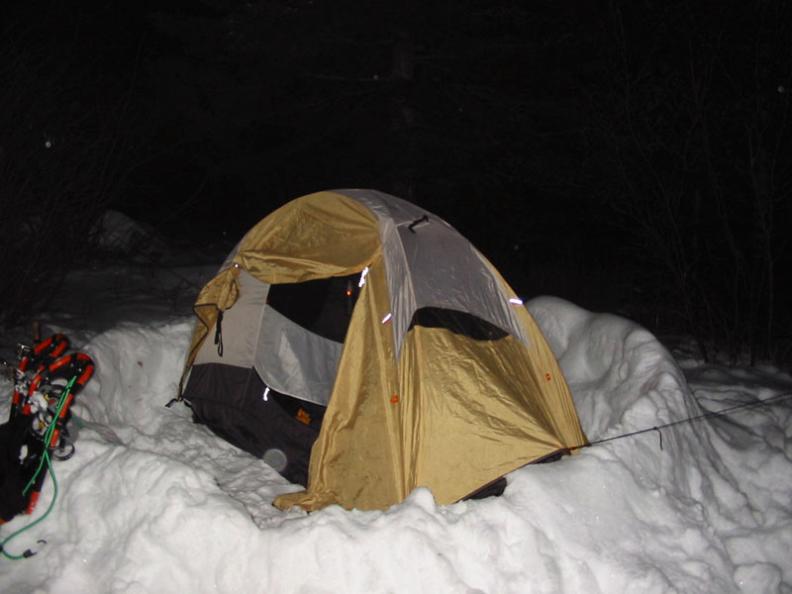 I setup camp and started a fire. After boiling some water I added it to my freeze dried meal and stuck in inside my jacket to let it re-hydrate. I noticed that the smoke from the fire was changing its direction, blowing into me instead of away. The temps were in the low 30’s during the day, but were dropping as the sun went down.

After dinner I changed out of my snow pants and into a pair wool bibs that I got last Christmas. When I was nice and warm I fired up my new Ipod. I have put together a pretty good collection of audiobooks as of late. Thoureau’s Walden was top of the playlist. I enjoyed sitting by the fire listening to the book very much that first night. I may consider bringing it along again on my next solo trip, although there is much more to listen to during the warmer months. That night I left the door of my tent open so I didn’t have to deal with letting Annie in and out. In past trips I have learned that she does not like to be confined all night. We do pretty well when I use my hammock. I usually just tie her to a tree and she curls up in the grass or on some extra gear. Sometime in the early morning, I woke up to the call of many wolves. Annie was out of the tent trying to grab their smell from the air. I drifted back to sleep, and woke up a couple hours later when she started liking my face wondering when breakfast would be served.

Day 2. I brought a bunch of fishing gear with on this trip- a hand auger, Vexilar, small heater, fuel, a tip-up and two poles. I didn’t use any of it. Here come the excuses... The second day turned out to be pretty windy and if I would have fished I would have been sitting on a blue pad with little or nothing to break the wind. Looking back at this point, I should have thought about these things a little better. Next year, I think I will find an area that gets me into the BWCA a little quicker and rig up some sort of wind block before hand. I may also find someone to go with me to share the load. Instead of fishing I decided to try building a quinzee hut. After an hour or so I had nice pile of snow to work with. I stuck a bunch of sticks 8-10” all over the pile of snow and started eating lunch while it all settled. Two hours later I began digging it all out. The sticks didn’t help very much, I mostly dug until I saw light coming in. 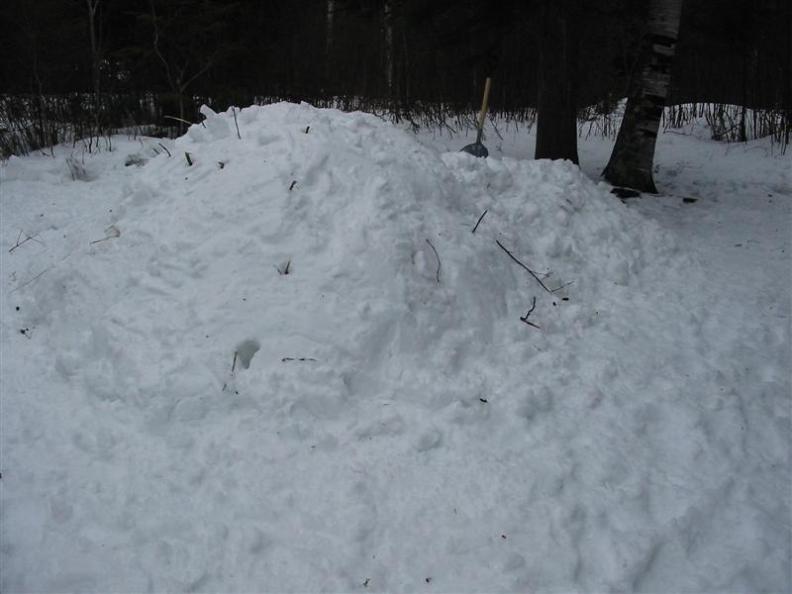 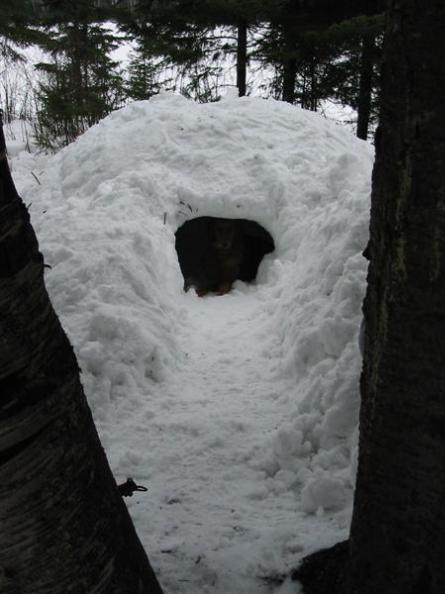 The cave was very spacious and quiet, it was certainly a treat to crawl in there and get out of the howling wind. I lit a couple candles and set out to get some firewood for the evening. As I was cleaning up after dinner that night, I glanced at Annie who was staring across the river. Although it was getting dark we could both plainly see a lone wolf traveling along the far edge. When it crossed our path, it sniffed around and even tossed something up in the air. Eventually it turned and went into the woods. It was both exhilarating and unnerving. Looking back it was the best part of the trip. I wish I had a better camera with. 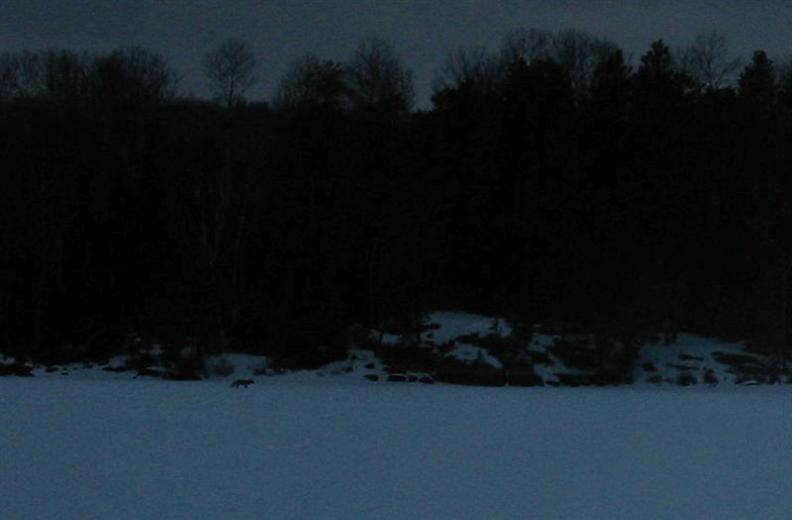 Day 3 The next morning I woke early and began packing up my gear. I tested the strength of the snow cave which had settled a lot over night. Annie and I were able to stand on top of it, but were not able to jump up and down on it. :) After taking some time in the morning to explore the shoreline and a couple campsites further down the river, we went began our four mile journey back. I found Annie’s lost boot just before the portage into Triangle lake. I assumed that was what the wolf had picked up the night before. I can only imagine what the wolf thought of the dog shoe.

snowmobile tracks on the river 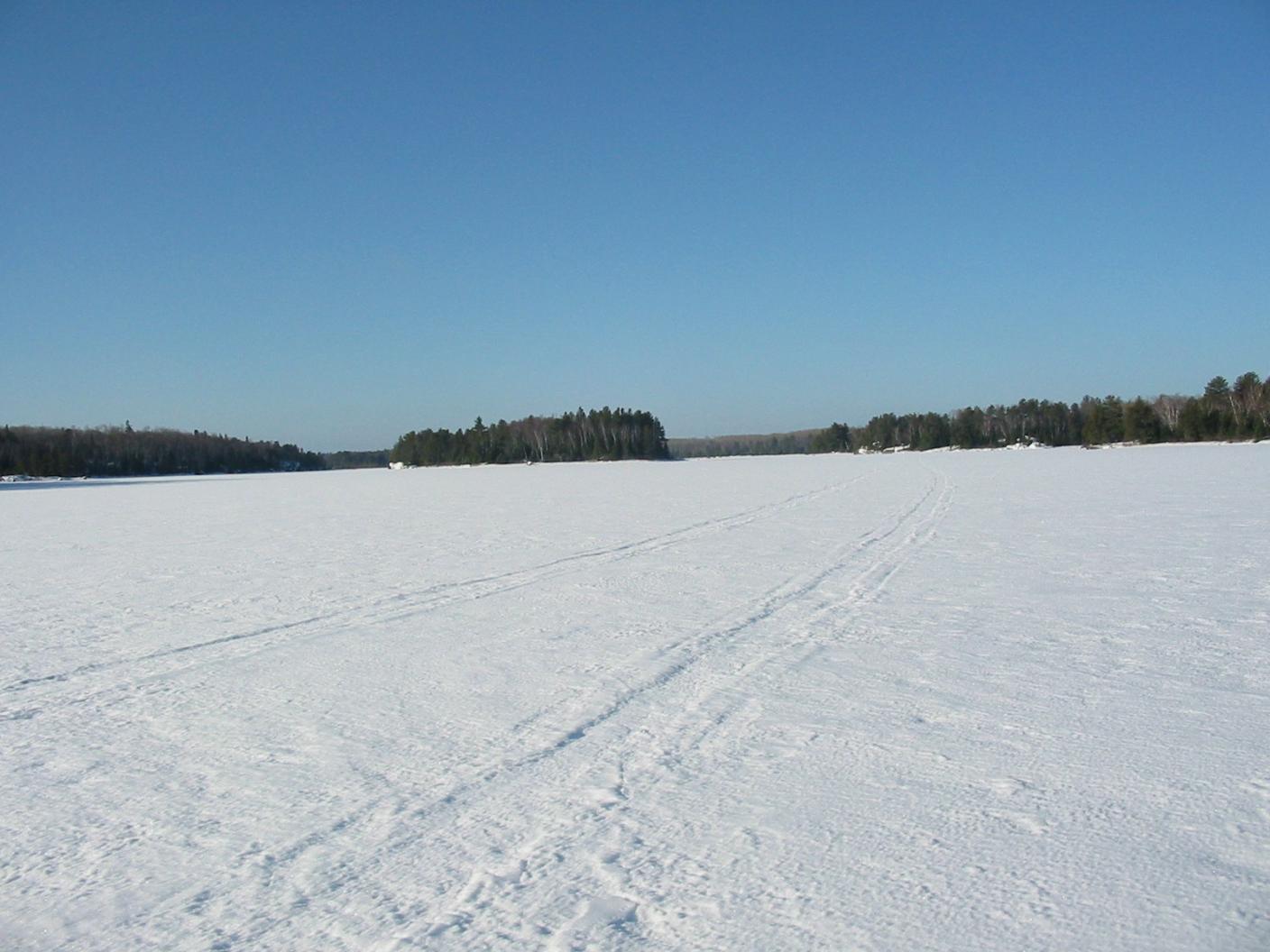 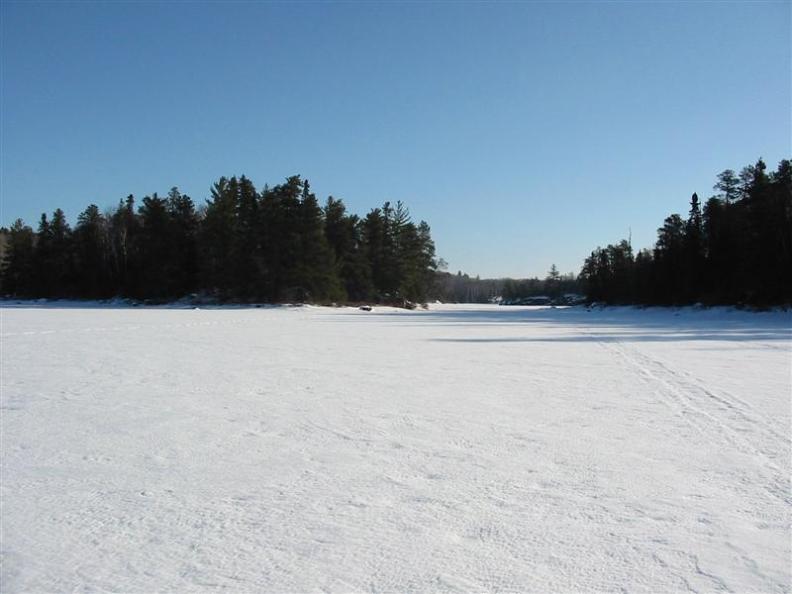 The hike back to the truck was uneventful. The morning was gorgeous, blue sky, high 30’s perfect. I had to dig it out a little before leaving the parking lot. It was good to change clothes. I learned a few things about winter camping on this trip. 1. You can take more gear than regular backpacking, but don’t overdo it. 2. If you are going to fish, don’t hike so far with all that gear. 3. Make sure the station accepts your card before you pump gas. 4. Bring a better camera next time!