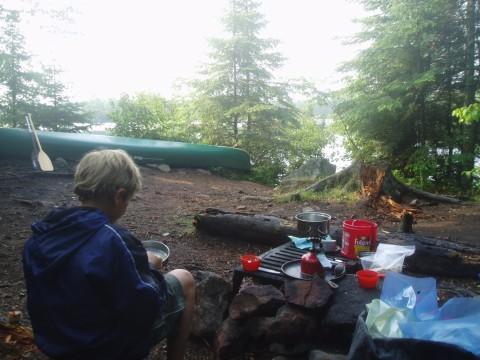 The Trip to Jack

8:00 AM we started a new day. It was cold and damp from the evening storms. It didn't look like it was going to get better today but the sun broke through the fog about 10:00 AM and things started to clear up. With the sun out it didn't take long to warm up. The first portage out of South Temperance is 240r. flat and easy, but long. Jr. tripped and fell, and I found him sobbing. He is getting tired out. The Temperance River was shallow and small. The 80r. portage to Weird Lake was easy. Weird is a pretty lake, with one campsite. Jr. ran the 12r. portage to make sure it was as short as I said it was. The channel between the two lakes is about 4’ wide and drops off some rocks 2’-3’. 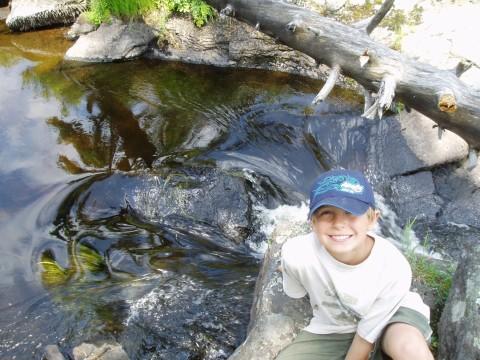 Some aluminum canoes took the channel but it was probably easier to portage. We took some pictures to give Mom. 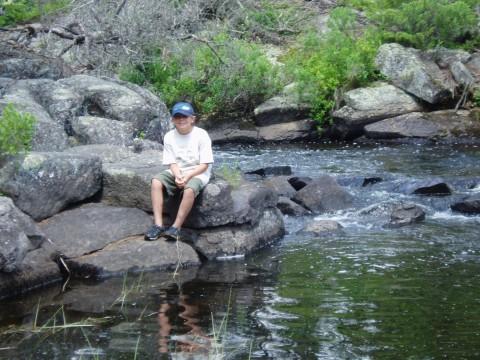 Jack Lake is nice quiet area. We were able to get the campsite on the point. We set up camp and hung everything to dry. Jr. is starting to loose interest and not as helpful today. We were set up by 2:00 PM and we went for a paddle to try to catch some fish and pump water. No fish and Jr. wanted to go for a swim, so first we gathered some wood. We swam off the north side of the point where there is a little rock slide going into the water. Jr. could see the other campsite and a rock bluff. We took the canoe over and checked out the campsite. There was an old moose skull on a log. 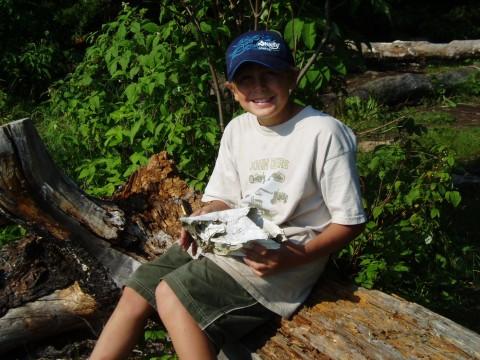 Jr. had his picture taken with it and we left it where we found it. The campsite was large enough for a big group. We paddled to the bluff and hiked to the top. The moss and lichens were thick and we sat and looked over the lake for a short time before Jr. was getting an itch to move on. As we were on the bluff Jr. started talking about how Mom would like this spot and we should take her here. He is starting to get lonely for home. It is a good thing we are going home tomorrow. Back at the campsite there were some very friendly chipmunks running about and Jr. thought it would be fun to share some trail mix with them and see how close they would come. I warned him about them but the best way to learn is by making the mistake. He turned his back after he put his trail mix back in his bag and one of the critters went into his bag to feed. The war was on. For the next hour Jr. was throwing things at them and plugging holes in the ground. Finally we had supper and Jr. was ready for the sack. He had a tough time getting to sleep. Missing home. He wanted me to go to bed at 7:30 PM with him but I needed to finish cleaning up camp and I wanted to cast from the rocks for a little while. The fish were popping bugs on the surface but they wanted nothing to do with what I was casting.