Trip Type: Paddling Canoe
Entry Date: 06/08/2021
Entry & Exit Point: Moose Lake (EP 25)
Number of Days: 6
Group Size: 2
Trip Introduction:
Since visiting the Dorthy Molter "Root Beer Lady" museum in Ely several years ago I have wanted to visit the Isle of Pines on Knife Lake.
Discuss Trip: View Discussion Thread (3 messages)
Report
The main purpose of this trip was to visit Isle of Pines in Knife Lake and have a relaxing six days in the Boundary Waters. For that we were successful. The unseasonably warm weather made it a little uncomfortable at times, especially when paddling into the sun. The reflection of the sun on the water made for a feeling of two suns beating down on you. The warm weather bred a couple brief but intense thunder showers. Also the warm weather made the evening campfire actually unpleasant which was a great disappointment to me. We launched Tuesday morning into Moose Lake. There weren’t other canoes launching at the same time but there were sure a lot of power boats hauling canoes up lake. We had a light tailwind and made good time. My main sight to see for the day was Prairie Portage. The Canadian side was Covid-Closed to us but it was interesting to see. We then paddled on into the No Motors area and relief from their noise. We paddled on to Campsite 1239 on Birch Lake. No portages for the whole day. A first for one of my trips and it made for a very happy wife. Unfortunately, we found the Campsite had not been taken care of by previous occupants. We found lots of partially empty food containers, partially cut up fish, and other garbage strewn in the trees next to camp. The “throne” had been used for a lot of garbage also. I am sure glad that this situation is the exception to almost all campsites I visited. We straightened up and cleaned up what we could. We got up bright and early the next day for our Big Day at Isle of Pine. Of course, it was 5 portages to get into Knife Lake. Easy short portages so not to much complaining from my wife. Isle of Pines was just about what I had expected. Almost zero sign of Dorthy’s buildings and structures. By looking carefully you could find subtle signs of the resort that was once there. Of course, we had to have an obligatory photo of Ribbon (Bacon) Rock. After an hour or two at IoP it was back in the boat and heading uplake. We spent the night at an island Campsite 1461. This campsite was really large and had plenty of room for many more than the two of us. The next day it was on up the lake, veering into the south arm of Knife Lake. The original plan was for a one portage day and camping on Eddy Lake. We got there plenty early and decided to continue on to the next campsite. Unfortunately, this involved 5 more portages. Again easy short portages but lots of loading and unloading. We camped on Kekekabic Lake that night. Campsite 1427 was really nice but not a very good landing for the canoe. In the morning we were treated to a moose jumping into the lake across from our camp and apparently intending to swim to our camp. When she became aware of our presence she abruptly changed course and swam clear across the big bay to the west. Made for a great show. The next day was an easy one. Three portages and four small lakes. We got held up on one of the portages by a particularly intense thunder storm. I just set up my tarp and waited it out. We actually had a pretty comfortable spot to do that along the trail. We spent the night on Dix Lake at Campsite 1414. Nice enough campsite but tent sites were not great, even for our one small tent. The fifth day was the tough one. We had to paddle into a stiff West wind all day. Missionary Lake was particularly tough. The water was only mildly rough (the lakes aren’t that big) but it sure slowed us down and felt like we were paddling uphill all day. When we made it to Ensign Lake we called it a day at Campsite 1220, a very nice camp. At Ensign Lake we started seeing people again. Once we left South Arm of Knife Lake we had seen just a few other people. Now at Ensign you didn’t have to look far to see others out enjoying this special place. The next day was to be our last day on the water. Two portages and 10 miles of paddling and we could get a shower. It was a great trip. Six days, five nights, 50 miles total, with 21 portages. Longest portage was something like 180 rods but most were in the 40-60 rod range. Mosquitos got annoying a couple times but I never felt the need to put on the bug screen or Deet. The Boundary Waters is a very special place. 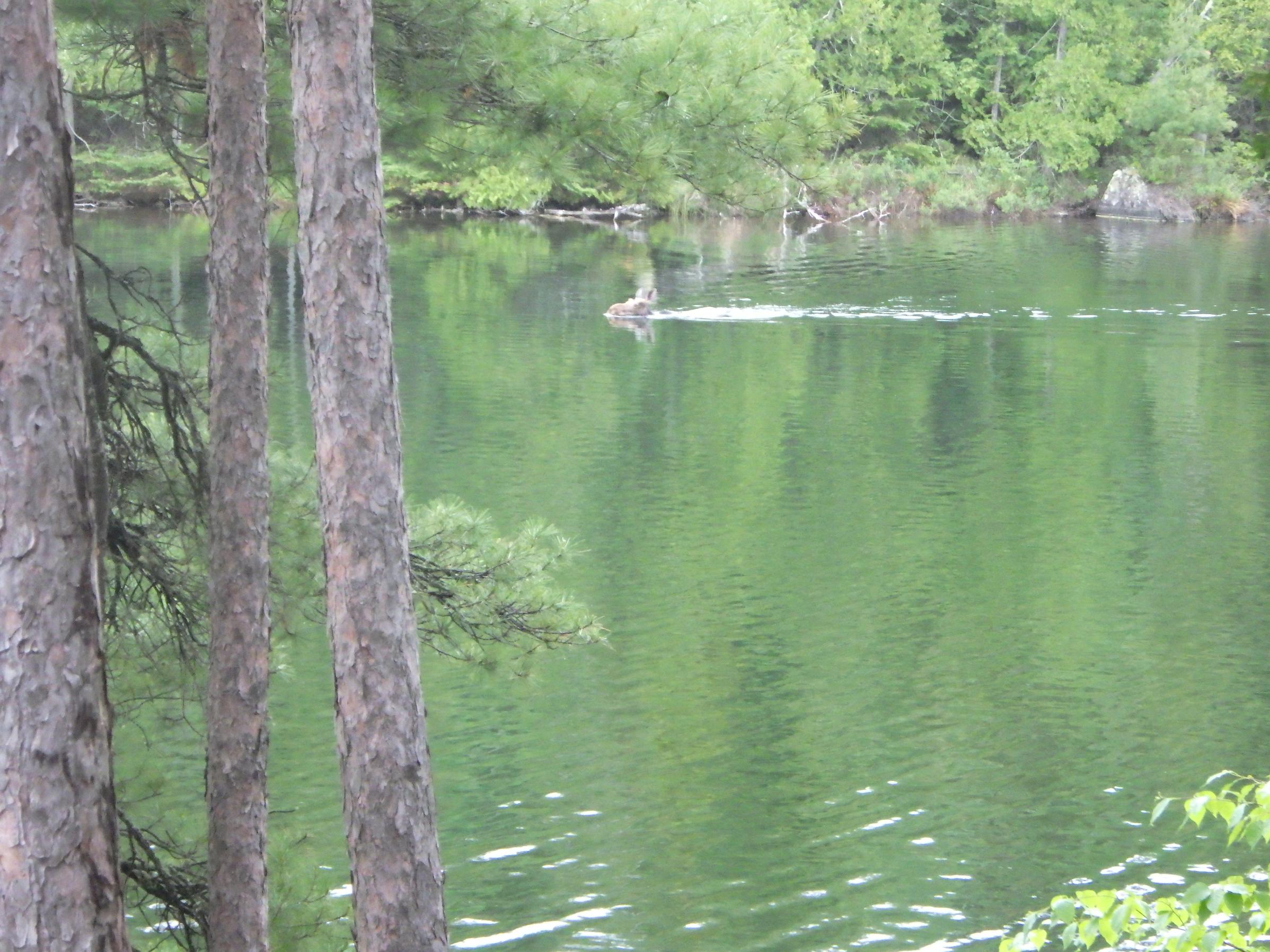