Plan B: Six Days in Sylvania
by naturboy12

Trip Type: Paddling Canoe
Entry Date: 08/22/2021
Entry & Exit Point: Other
Number of Days: 6
Group Size: 2
Trip Introduction:
With the BW closed due to wildfire activity near our planned EP, my youngest son and I decided to instead take our 2021 trip to Sylvania. We had been there before for shorter stays (3 and 4 days), but decided to explore more of the area and spend 5 nights/6 days.
Discuss Trip: View Discussion Thread (7 messages)
Day 1 of 6
Sunday, August 22, 2021

Every epic excursion begins with the not-as-exciting drive to get there, but right from the start of this trip, we were reminded why travelling to Sylvania is such a treat. A short drive of just over 3 hours through mostly forested and sparsely populated areas gets us across the Michigan border and into Watersmeet, with only a few more short miles to Sylvania itself. We hit the road at 8:30 AM, made a stop at Sylvania Outfitters for a map and a couple of fishing lures, and were loading our canoe at the Clark Lake landing by just after Noon. It was a near perfect paddling day, with bluebird skies and seasonal temperatures, and for the first time, we would be paddling Clark Lake with a slight tailwind, rather than the stiff headwind we had encountered on our 2 previous visits. The landing area was bustling with activity, as a few groups were getting ready to put in or take out, something very typical of the early afternoon in Sylvania.

Somehow we had scored a last minute reservation for our first 3 nights at the amazing "Loon" campsite on Loon Lake, which we arrived at quickly and easily. Jaden did get to witness one of the crabbiest, least patient parents I have ever seen in any wilderness setting while we were at the Clark/Loon portage, and told me if I ever acted like that dad did, he would stop coming on trips with me. Duly noted kid. Hopefully the solitude of nature and serenity of the surroundings helped to mellow that disgruntled dad during his stay, even if only for a while.

Loon Lake has a spectacular glacial blue tint reminiscent of high altitude lakes found in the Rockies, with clear, cool water that looks like it came out of a bottling plant. We set up camp and decided 10 people (the max allowed in Sylvania) would fit here easily, and still make the site look empty, but we felt only a little guilty having it all to share between only the two of us. With an easy sandy canoe landing, a high forest canopy with ample food hanging trees, a hiking path all along the lakeshore and no second campsite nearby, it was easy to see why so many people choose this site as their preferred destination when coming to Sylvania.

After dinner the light winds had diminished and we headed out to explore, fish, and just relax on the smooth as glass water. By late evening, we had caught a few fish along the shores, but had just as much enjoyment taking in the views of the forest reflecting on the lakes surface. We stayed out on the water until sunset, nearly giddy by the almost complete lack of mosquitoes and just listened to the loons calling. A short while later while around our campfire, we watched the orange moon rise above the horizon, signaling an end to a great first day in the wilderness. 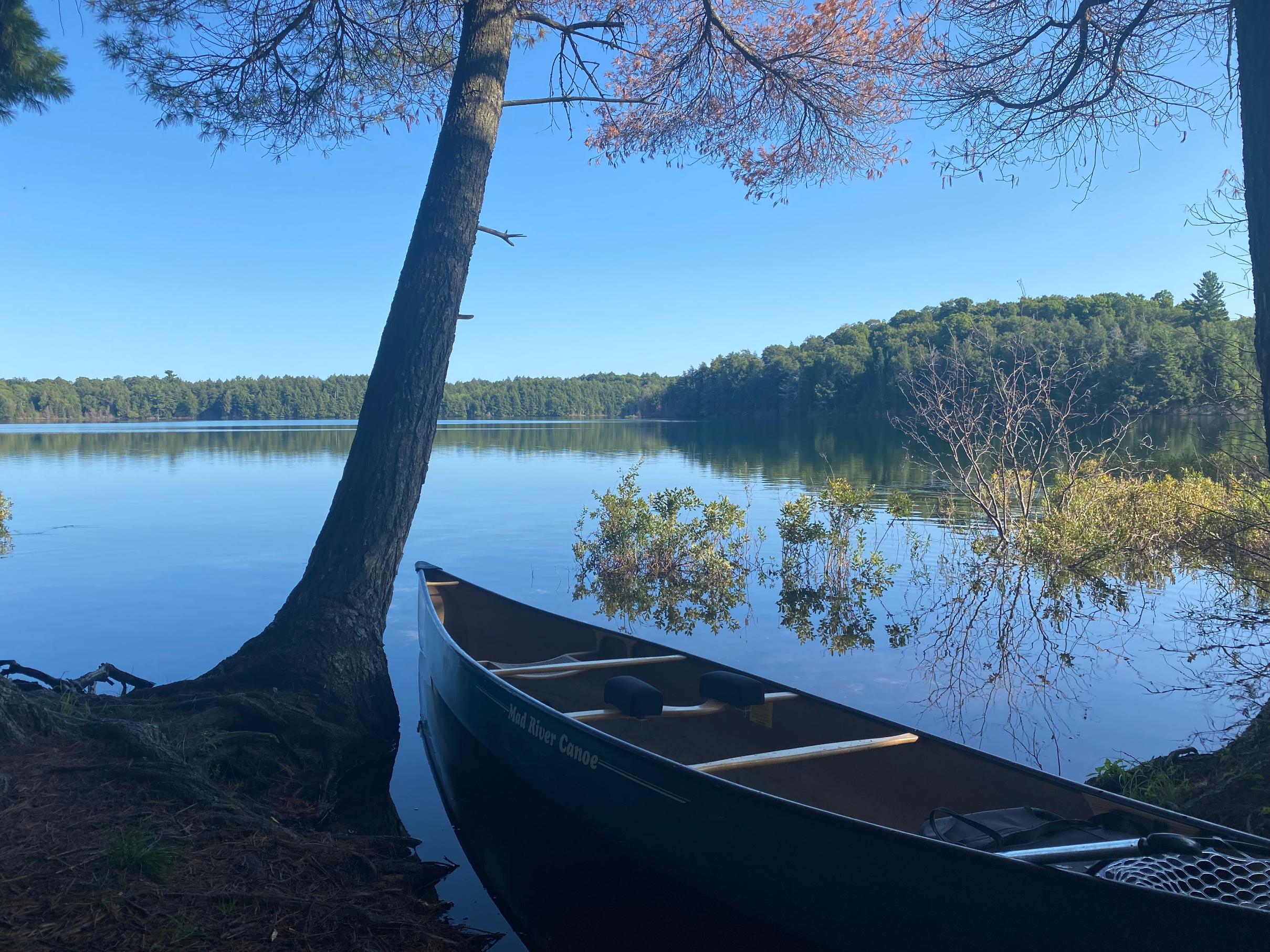 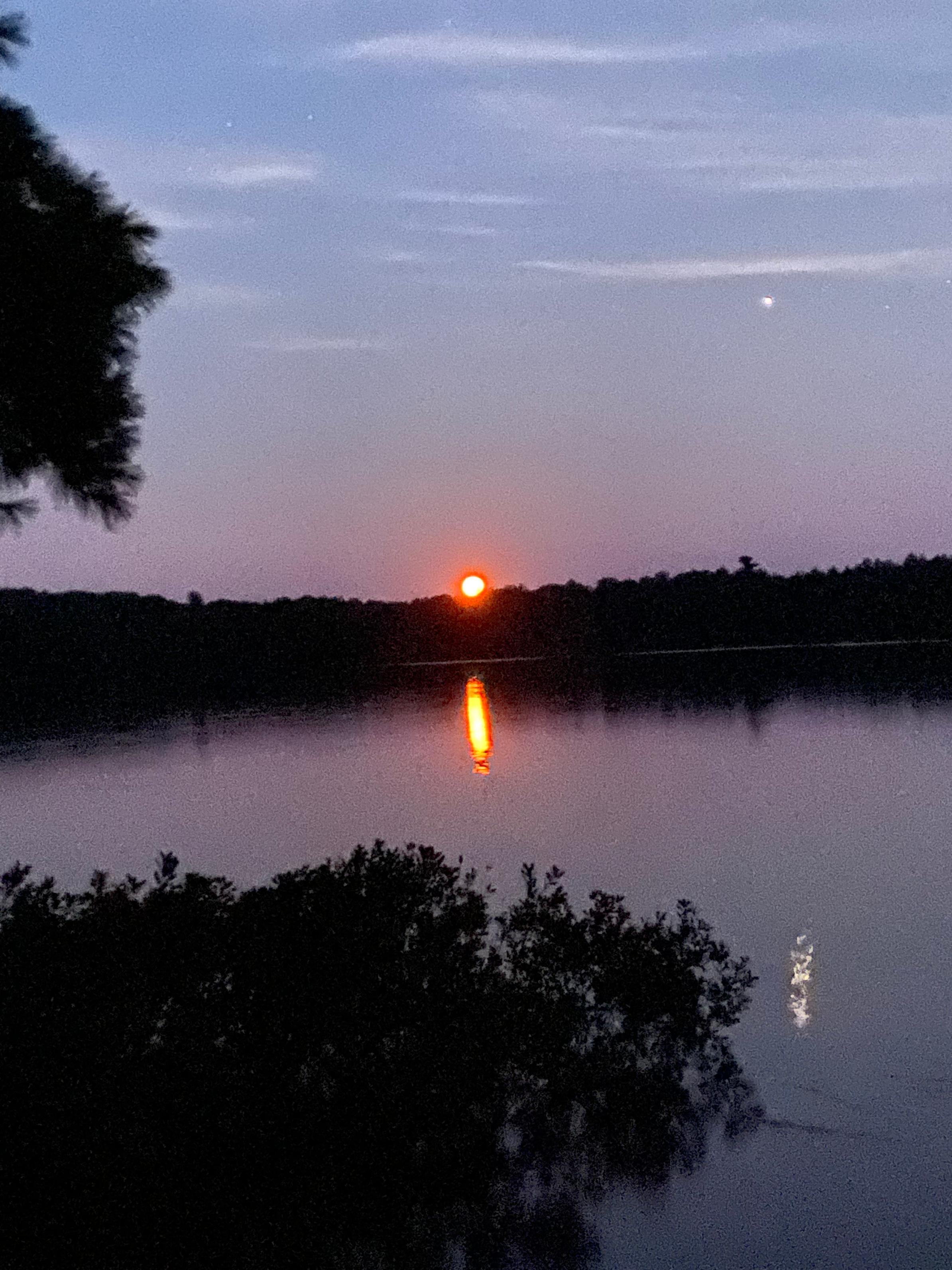