Trip Type: Paddling Canoe
Entry Date: 06/12/2021
Entry & Exit Point: Seagull Lake (EP 54)
Number of Days: 6
Group Size: 4
Trip Introduction:
My brother and I (Brad and Bryan) take yearly trips up to the Boundary Waters and love the wilderness fishing experience. We have been going up since we were young and have been on many trips. Our most memorable fishing trip was when I was 18 and he was 16 to South Arm of Knife Lake and decided that it was time to go back to that area for the first time since 2010. This year we brought a couple friends (Zack and Tyler) with for a Mid-June trip focused on fishing. Unfortunately, we had some time constraints with some personal stuff going on so had to cut our trip short some on both ends but it was a great trip for weather and fishing.
Discuss Trip: View Discussion Thread (12 messages)
Day 1 of 6
Saturday, June 12, 2021

Friday June 11th: We all arrived in Northern Wisconsin at different times on Friday night as we were all on different schedules. A member of our party had some last-minute emergency type situations that delayed us a day and caused us to come out a day early as well. However, by 9pm all 4 of us had arrived and had our gear all packed up and ready to head out. We were all very excited for our trip and game planning for the next couple of days. The original plan was to leave in the early AM on Saturday but after looking at how windy it was looking on Saturday, we decided to leave in the middle of the night to get started as early as possible.

-Sunny, upper 70s and lows 80s, building wind throughout the day with gusts up to low 20s. -We were on the road by midnight and drove up through the night as we were wanting to beat the wind as much as we could. We were paddling out of the entry point around 4am. I would not recommend this to anyone, but we are experienced trippers and were familiar with the lake and the route as well as having GPS on our phones. We got to the other end of Seagull Lake as it was starting to get light. It was a little sketchy but ended up working out very well with how windy the day got.

We had a long day of travel the first day, pushing all the way to the South Arm of Knife Lake. We had some snacks and water accessible to refuel as we went. None of the portages wee overly difficult, just some long paddles and the wind was starting to build as the day went. We were very grateful that we had chose to start as early as we did. The 4 of us made good time and covered the lakes and portages fairly quickly. We decided to push off lunch until we got to the campsite. We were pretty exhausted by the time we reached SAK and the wind was blowing pretty good by this time. We traversed the big water carefully and skillfully and found a campsite to our liking. It was not our preferred campsite, but it ended up being a good 2nd choice and caused us to explore some new water. The site was nice and protected as well from sun and wind. This trip was amazing for bugs as well. You would think with how warm the weather was that they would be out in droves, but they were not bad at all.

We got some lunch and set up our tents and took care of other camp responsibilities such as collecting firewood, hanging the bear bag, stringing up some hammocks, and readying our fishing gear. As we were setting up camp Zack could not wait and longer and cast out a jig and plastic and landed a nice 18” Smallmouth on his 2nd cast. As we finished our tasks, he had caught several more Smallies which made 5 in less than 10 minutes. This made us quite excited for getting into some good post spawn action with the bass. We tidied up camp, hung the bear bag, and headed out fishing for a couple hours. We did not stay out for too long due to the wind but both boats managed around a half dozen smallies each. 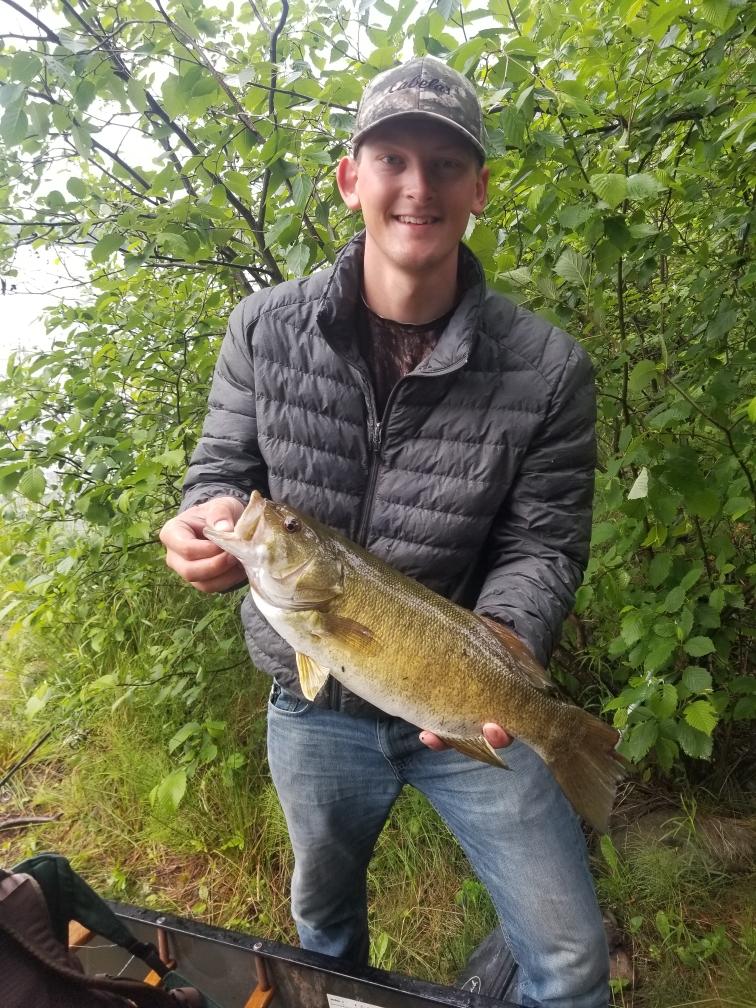 Back at camp Zack, Tyler, and Brad all took naps for a couple hours as we had a long and hard first day. I went to read in my camp chair on the shore and cast out a slip bobber pole. Long story short, I did not get much reading or relaxing done over the next couple hours. In a couple hours of slip bobber fishing, I probably caught around 15-20 smallies. Most were on the smaller side (12-15”) but managed a few that were probably close to 18”. I did not measure any of these fish during this stretch of fishing. I got a short 30-minute nap in the hammock as I needed to recharge a little before heading out to do some evening fishing. We prepared our dinner and went out fishing for the last few hours of daylight. We typically use the first night to scout out spots and try to learn the area so do not typically do super well the first night. We did okay but not up to our standards, with my brother and I catching 5 walleyes and 8 Smallmouth bass. We were mostly dragging jigs and fan casting them as well around structure. We did do a little bit of slip bobber fishing right at the end of the night as well. The other guys managed a couple of each species as well. 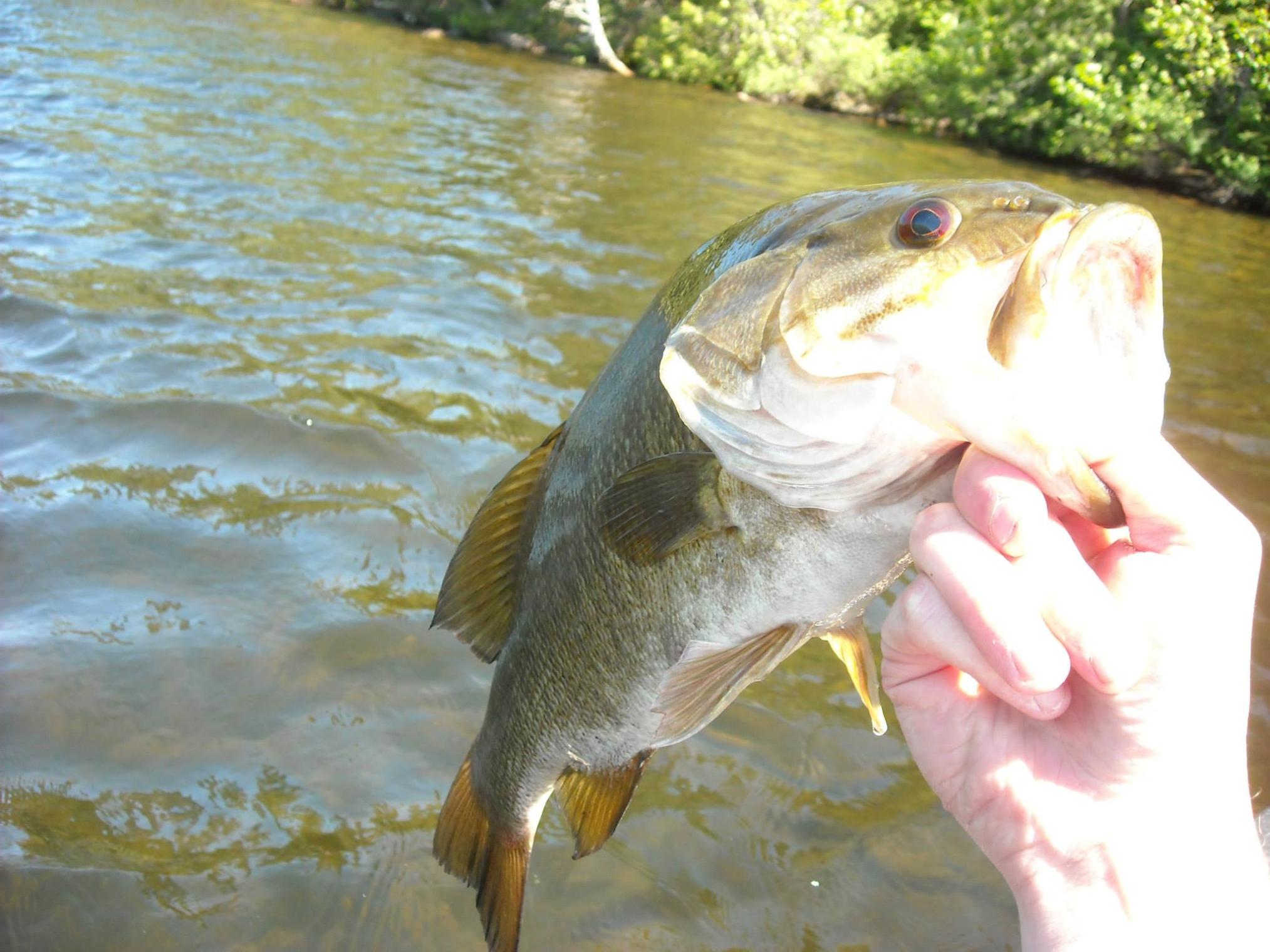 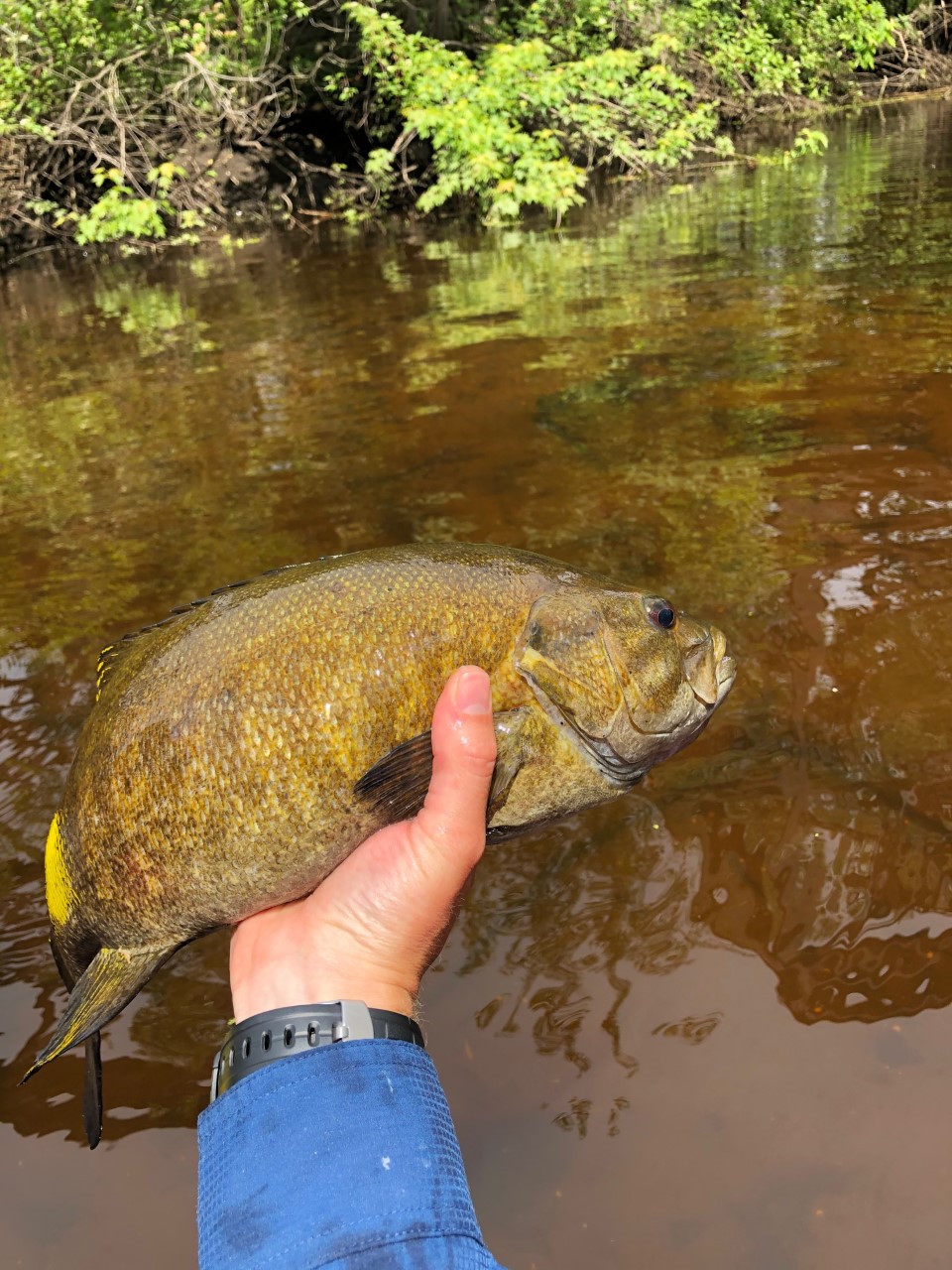 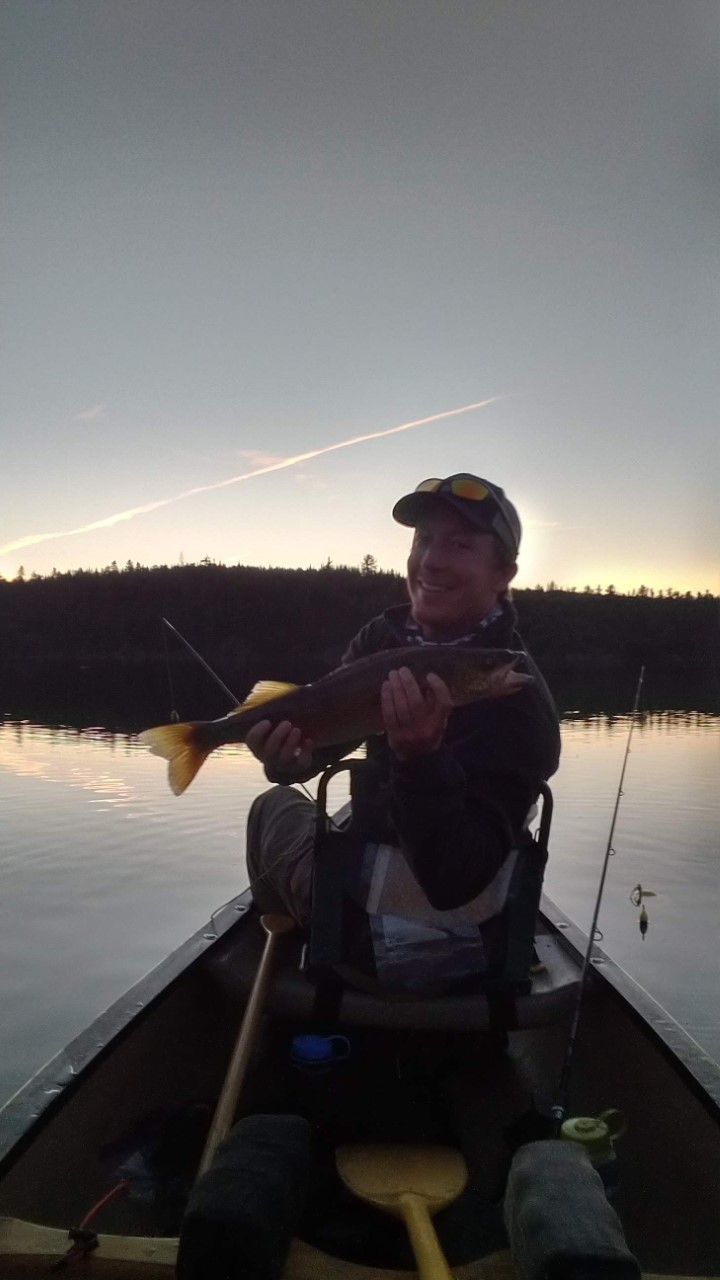 We hung out by the fire back at camp for a little bit drinking some hot drinks and catching up on life some. However, we did not stay up too long as we had a very long first day of travel and were all pretty exhausted.