Hybrid Solo 3 Guys and a Dog
by TomT

Trip Type: Paddling Canoe
Entry Date: 09/06/2021
Entry Point: Moose Lake (EP 25)
Exit Point: Snowbank Lake (EP 27)
Number of Days: 11
Group Size: 3
Trip Introduction:
This would be my 21st trip to canoe country of a week or longer.
Discuss Trip: View Discussion Thread (21 messages)
Day 1 of 11
Monday, September 06, 2021 I was originally going to do a solo for 10 nights with Luna. That was before the fires. 2021 had large forest fires inside the park and one out of the park to the south. High winds kicked these up to where the whole BWCA was closed for two weeks right before my trip. Due to recent rains, on September 3rd they opened parts of the park back up to canoe travel but my southern entry point was still closed, too close to the smoldering fires.

I then got an invitation to join my friend Stew (Portagedog09) and his son Ben who were going in for a week from Moose Lake which had opened back up. I jumped at the chance to get on their permit. I’ve known Stew from message boards like this one and meet ups at the annual Canoecopia convention in Madison Wisconsin for several years. We tripped together in a group of six in 2019 so we weren’t strangers.

I arrive at our outfitter, William and Hall on Moose Lake after an uneventful 10 hour drive on Sunday. We would spend the night in their bunkhouse, have breakfast there then get a 20 minute boat shuttle over to Splash Lake the next morning to start our trip on Monday Sept. 6th.

I met Stew on the front porch along with Ben his oldest son who was around mid 30’s. He was last in canoe country when in the boy scouts almost 20 years ago. He was excited to get back up here as he lives in California now. Stew flew in from Virginia and I’m from outside Chicago.

We had dinner in the dining room and went over our maps. Thomas Lake was decided as our first destination. The only question was if we could make it there on day one or on day two. “We’ll play it by ear and see how we are feeling” we all agreed. Stew and Ben would need to be back after 6 nights while I had 10 or 11 nights available so we would split up at some point. 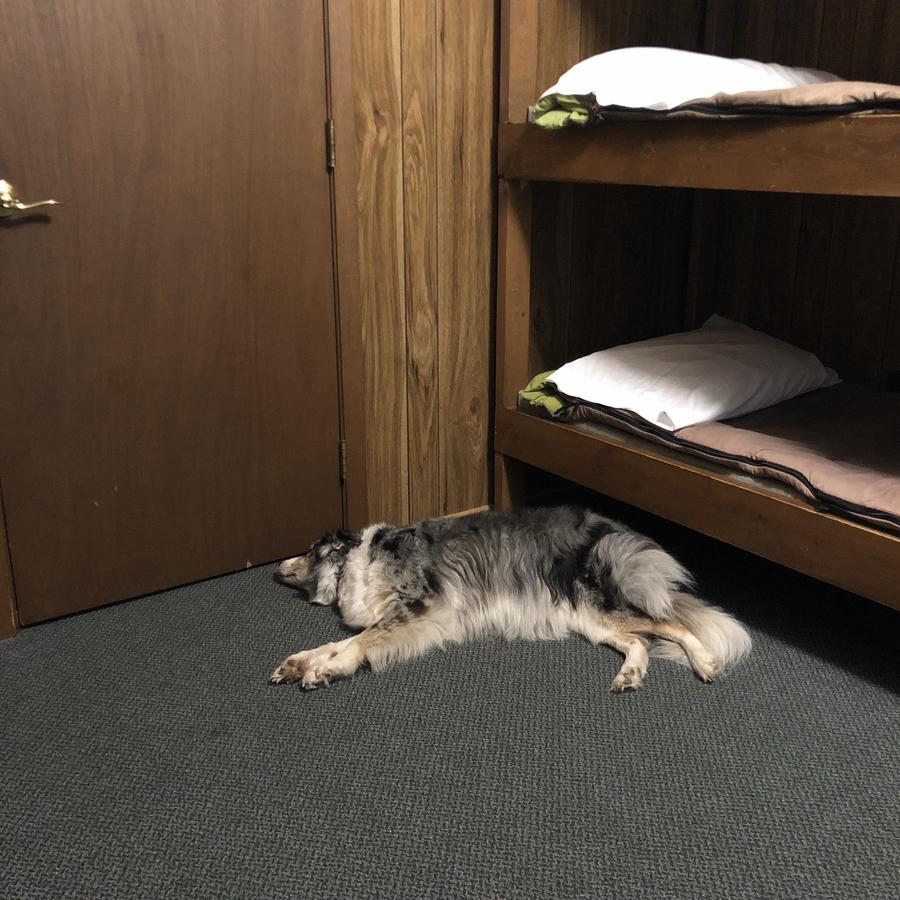 Not much is more exciting than the morning a trip begins. William and Hall Outfitters, Ely Minnesota 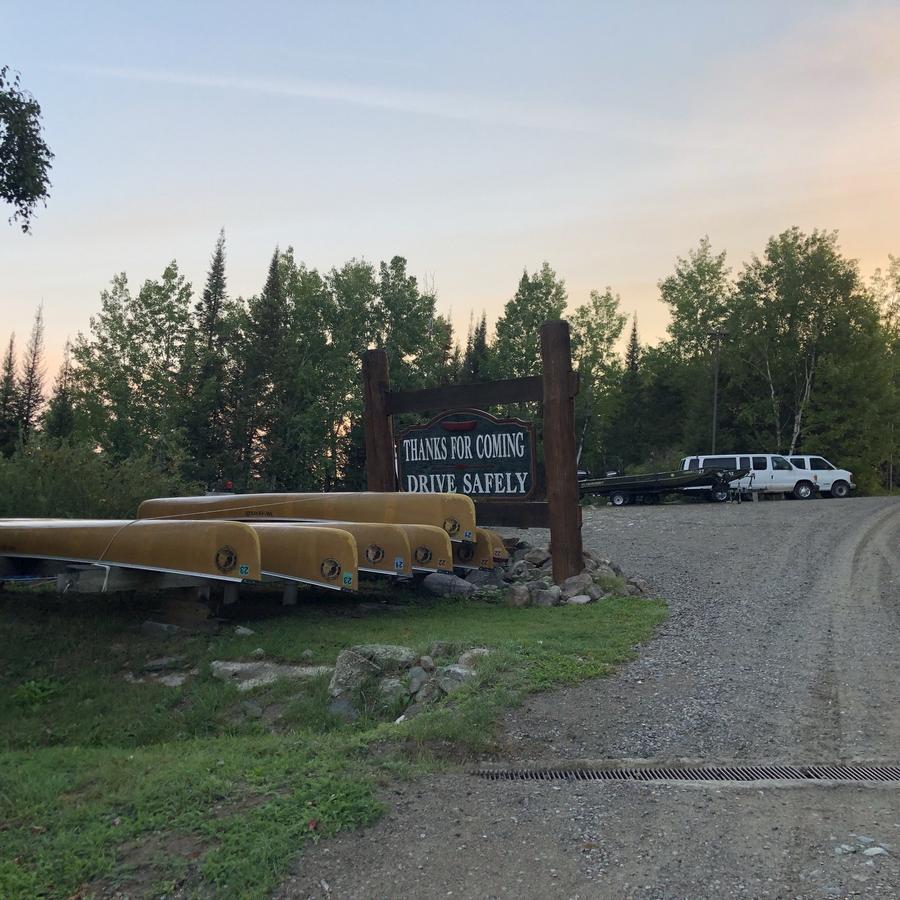 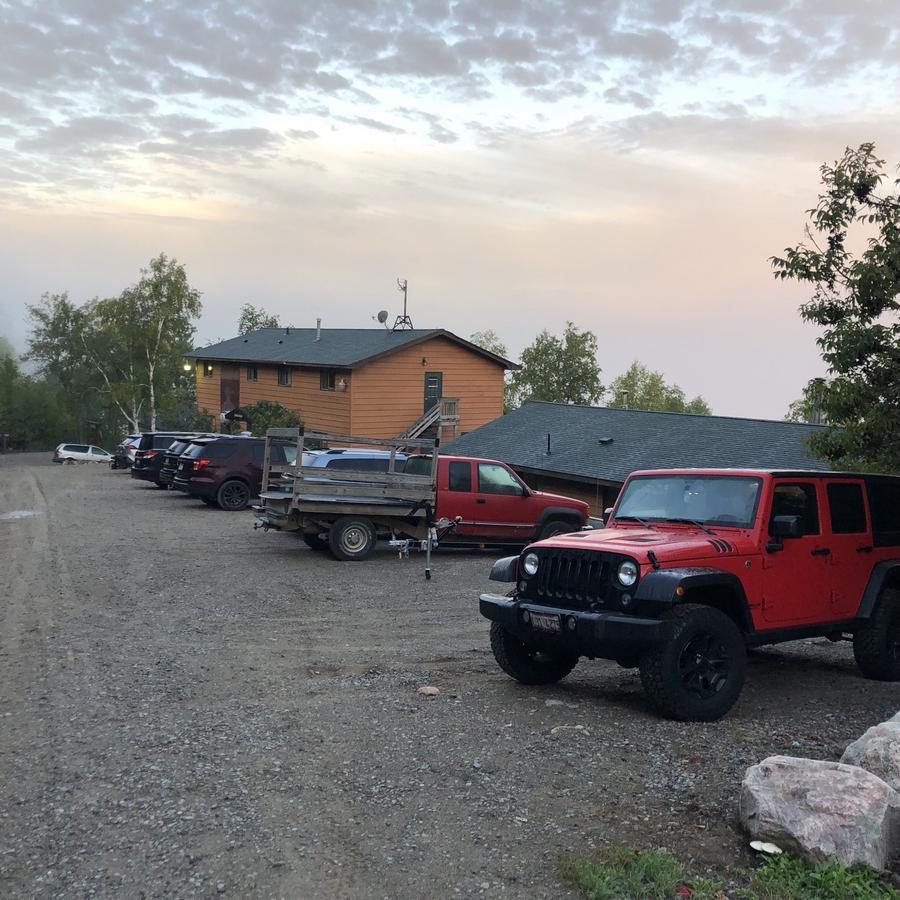 Up at 5:30 we dress in our tripping clothes and haul packs to the towboat. Everything is organized, we park the cars and have a big classic breakfast of pancakes and bacon with lots of coffee for me. The forecast says sunny and 60’s with mild westerly winds. Couldn’t be more perfect! It also says heavy rain overnight and rain on Tuesday. We decide to push on to Thomas today instead of packing up in the rain on Tuesday. 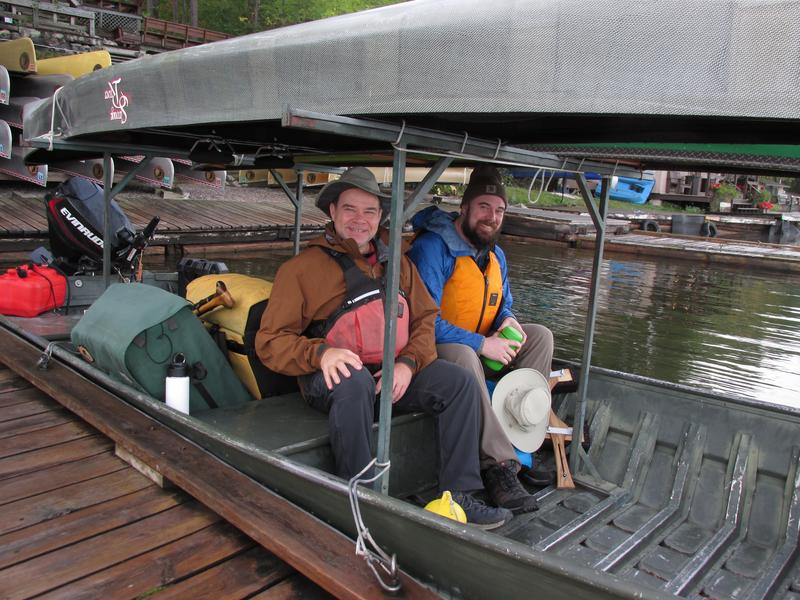 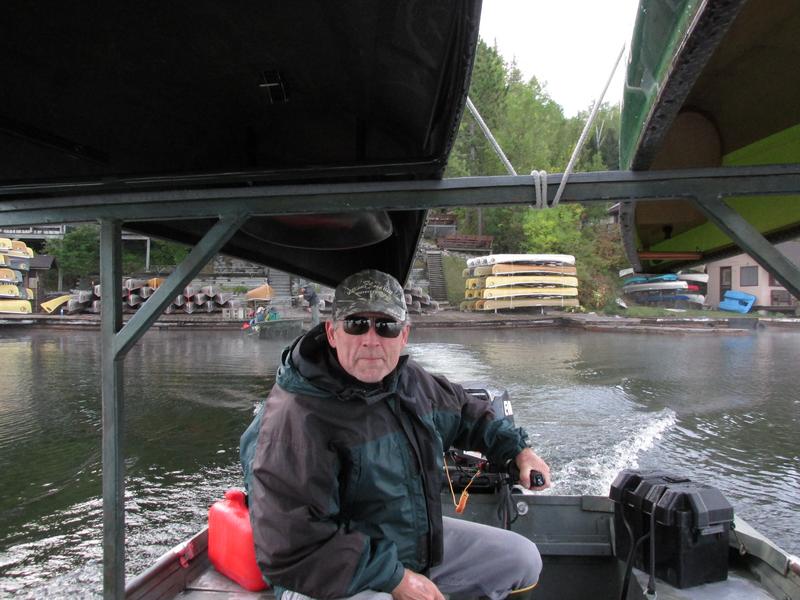 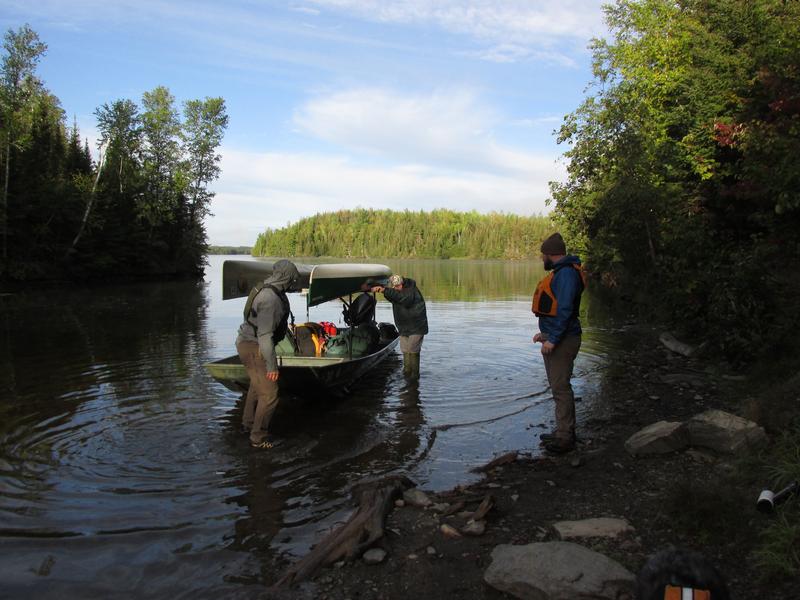 Paddling is great. It’s so nice to be back up here smelling the pines. This is Luna’s 6th trip with me so she knows the drill. She loves to portage between the lakes and her enthusiasm inspires me as I tire throughout the day. We go east through Ensign 55 rods into Ashigan for a short paddle for a 105 rod portage into Gibson. Then it’s 2 short ports into Cattyman and Jordan Lakes before hitting the long narrow channel that leads into Ima Lake. This narrows is very scenic with high bluffs at waters edge. The painted turtles sunbathe on flat rocks along the shore. It’s quiet and starting to feel wild. 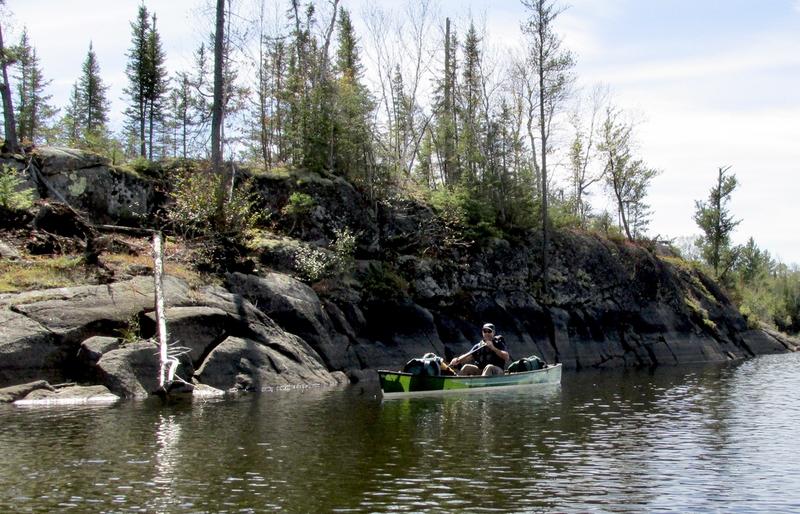 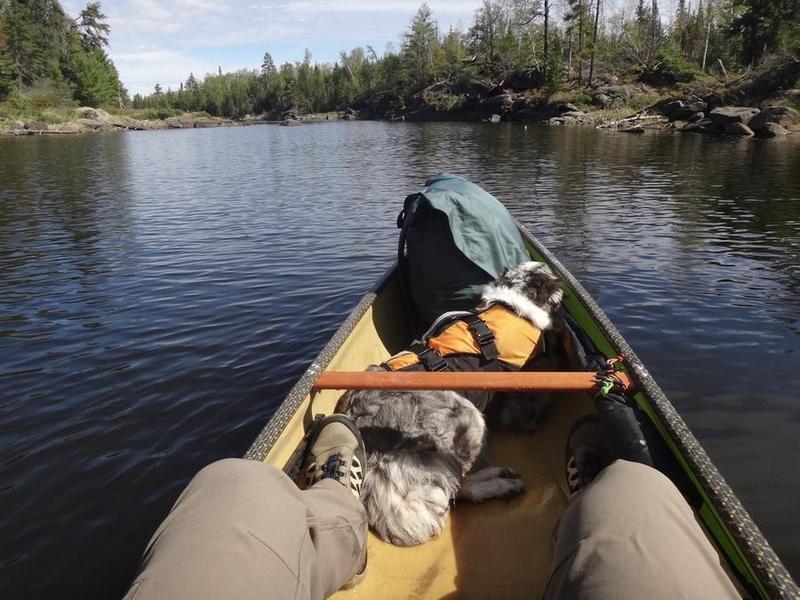 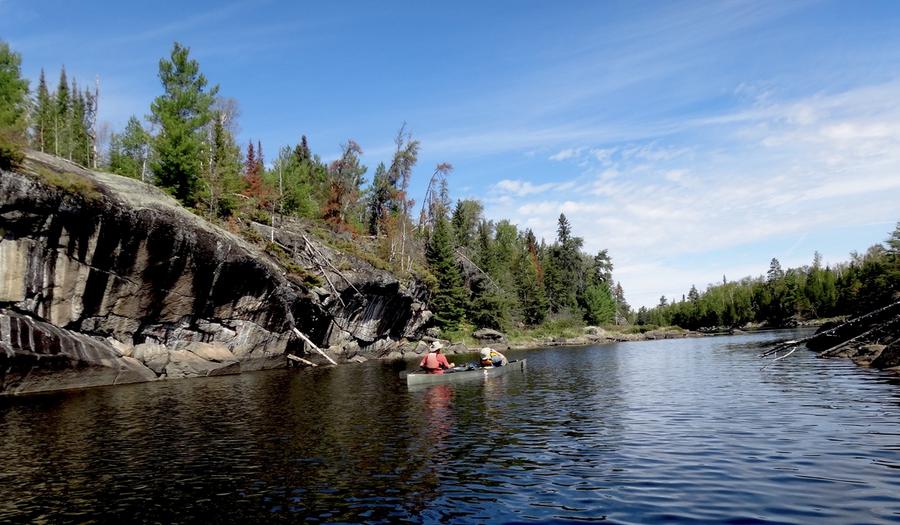 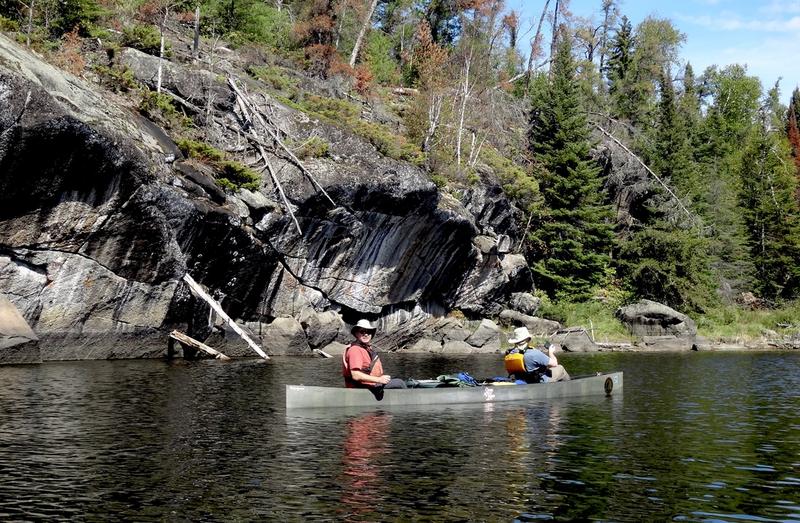 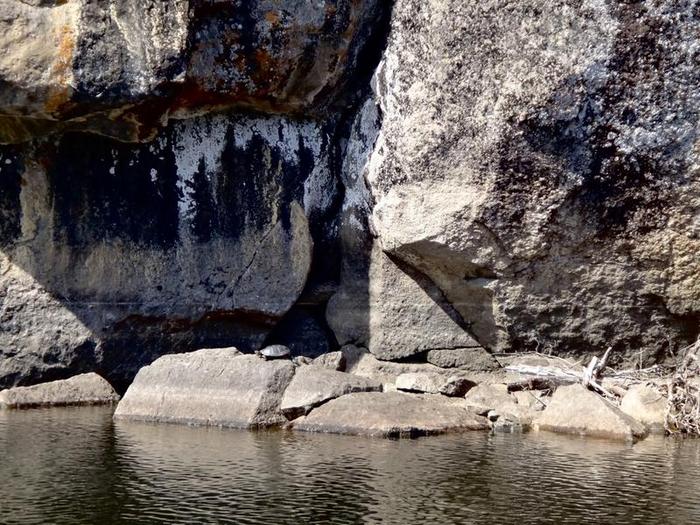 Me and Luna on the trail - pic courtesy Stew 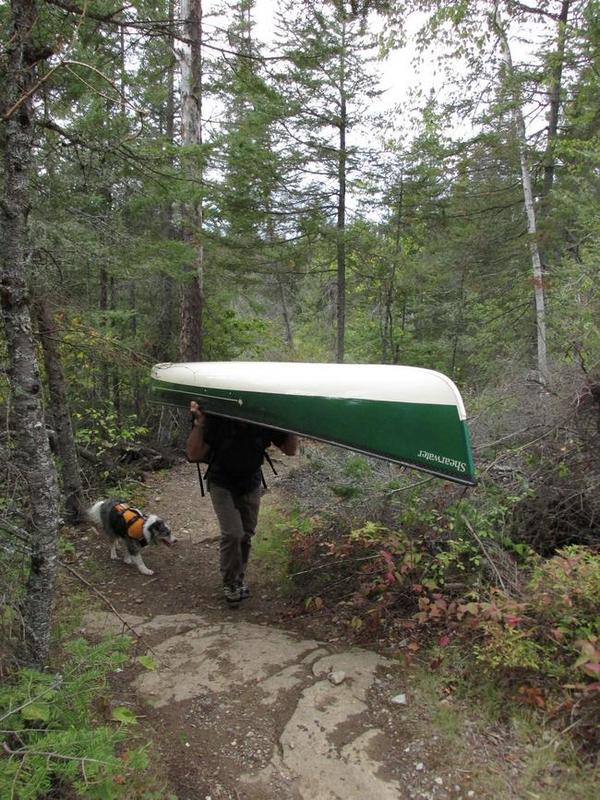 With a light tailwind we easily cross big, open Ima Lake to the 55 rodder into Hatchet Creek. Three more very short portages and we land on Thomas Lake around 4:00 PM. We’re feeling pretty cooked from all the excursion so now it’s a matter of finding a decent site. There’s many here to choose from and after research and reading camp reviews we narrow it down to 4 or 5 we’d like to stay at. We stop and look at 3 sites before we settle on a beauty tucked in on a strip of peninsula near the SW bay of Thomas.

Great landing here as well as fireplace but the fire ban is in effect so Stew and Ben set up a kitchen area under Stew’s big white CCS tarp. Their two tents are behind that and I set up my hammock along with Luna’s “pup tent” way in the back. We will be here for 5 nights and couldn’t have asked for a better place to hang out.

After camp is set and water gathered and filtered we have dinner. I have a tradition of making large sandwiches for lunch and dinner the first day (no mess) so polish off a big salami and swiss with mayo and giardinara peppers. We sit up till dark, chat and get to know each other a bit then head off to well earned sleep. 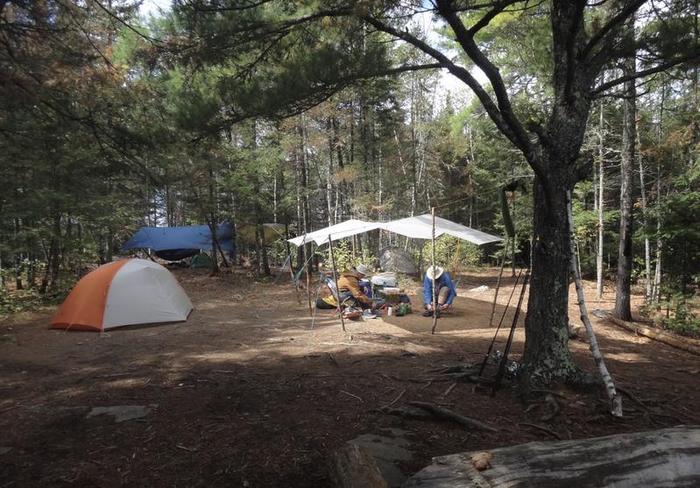 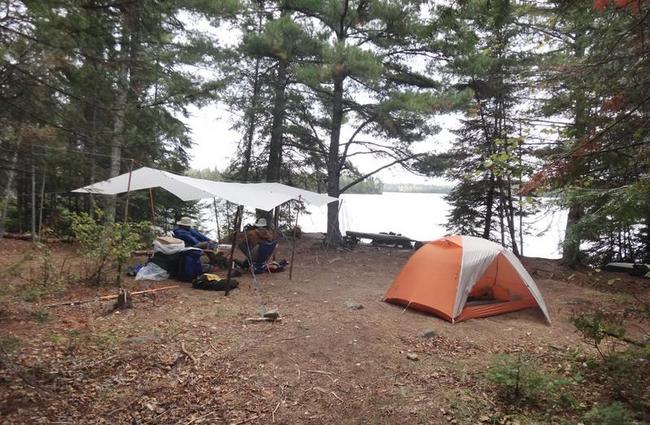 My shanty set up in back 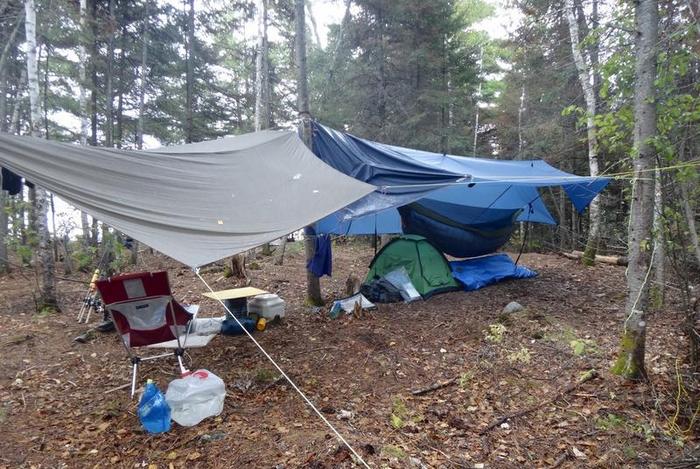