Trip Type: Paddling Canoe
Entry Date: 08/06/2006
Entry Point: Little Vermilion Lake (Crane Lake) (EP 12)
Exit Point: Little Indian Sioux River (north) (EP 14)
Number of Days: 6
Group Size: 4
Trip Introduction:
After having our EP yanked due to the fire (seagull to knife) and one guy backing out because he didn't want to do a new route, I was left scrambling. We were driving 18 hours from WV and I had 3 days to pull this out. I called one of the Ranger stations. The lady I talked to was extremely helpful. We decided to go into the eastern section to get as far away from the fire as possible. One of the few permits left was #12 Little Vermillion Lake. It offers 12 a day because you can have motor boats on part of it. We picked up another person and made the drive. Our plan was to go from little vermilion to loon and down to the devils cascade and out ep #15.
Day 1 of 6
Sunday, August 06, 2006 This was by far the hardest day of our trip. We did not catch up to my cousin, who flew in from CA, until 11:00. After meeting in Ely and getting fishing licenses (we had done the permits ealier in the day), we ran the shuttle. It was close to 2:30 before getting on the water. So much for my hopes of eating lunch in the BWCA. The lake that you put in on is Cane Lake. If we had planned ahead we would have arrainged to have a shuttle across it. It was a big lake with a lot of chop. Combine that with a fair number of motor boats heading to take out, our put in, it was misserable. Some how no matter how much we protested, the 2 paddlers with the least amount of experience were in a canoe together. To make matters worse, Tim didn't swim at all. Having planned all of this and just telling the others where to show up I sort of felt in charge of their health. I had just left my real job (dentist) where I worry about people to a vacation where I was worrying over them. I got over that pretty quickly. After watching the other boat zig zag back and forth as they fought the wind and taking on some water ourselves, I was pretty nervous myself. We were well away from shore and all glad that we had on our lifejackets especailly Tim. We saw a sandy beach and pulled over for some rest and drink. We were wipped already and not even in the park yet. I think a couple of them were wondering what we were getting into. I also was starting to get my doubts. I hadn't paddled enough. done much planning, and was not sure I wanted to battle waves like this the whole time. A few minintues later we were back on the water and not soon enough turning onto little Vermillion lake. It was amazing. The waves got 1/2 as small and then smaller until there were none at all. An hour or so later we were in the park. We took the second campsite and started dinner. It was after 7 and we had been traveling for 3 days. A quick dinner and some unpacking. We hung the bear bag. This was our first time and we were wipped. Luckily Joel was an avid climber. A couple Z drags later the bag was up. I was quite releived. I had not hung a bag since Boy Scouts. A couple of nips later (warm liquer sucks), we were all in bed and agreed not to wake anyone up in the morning. 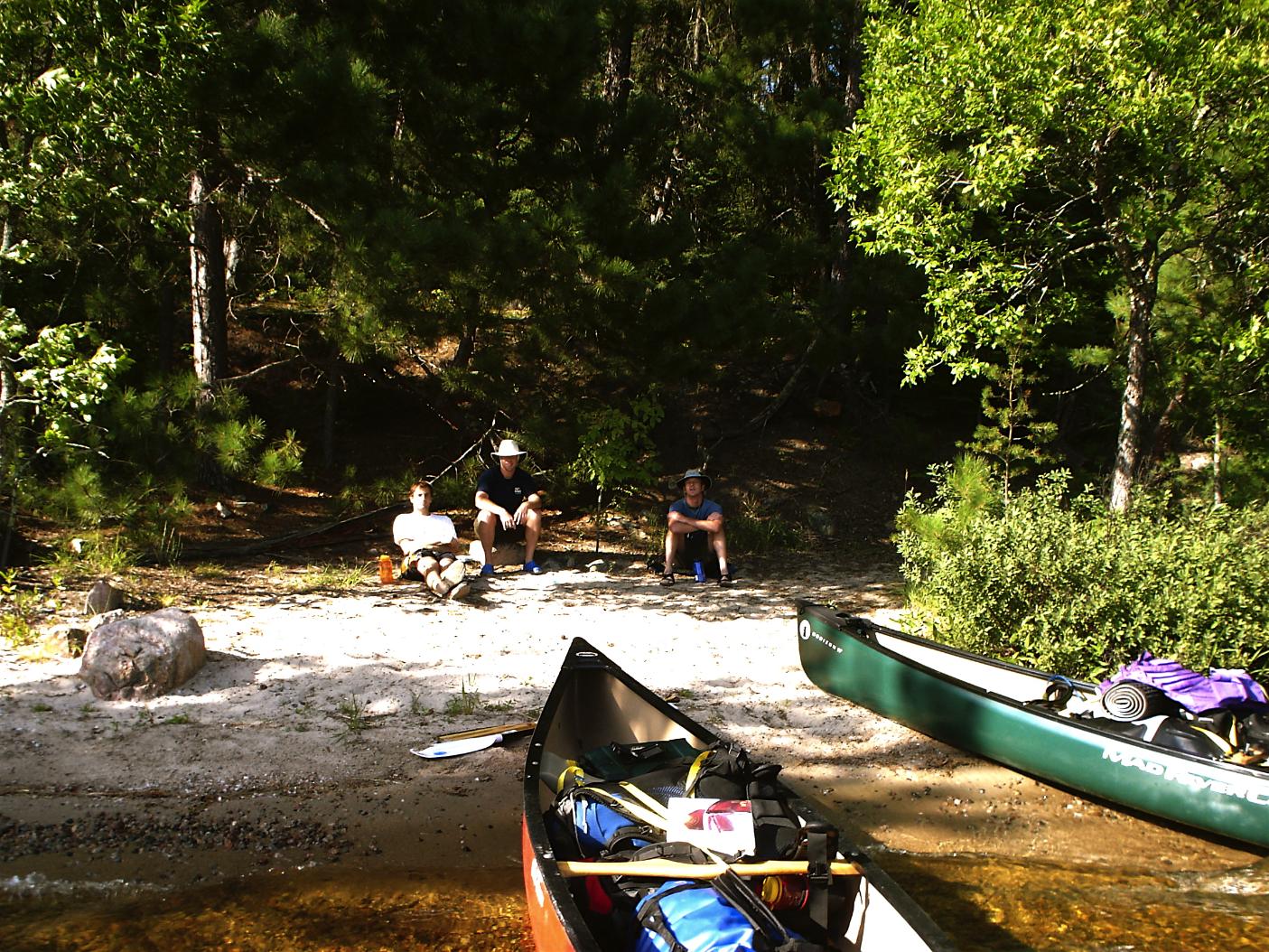 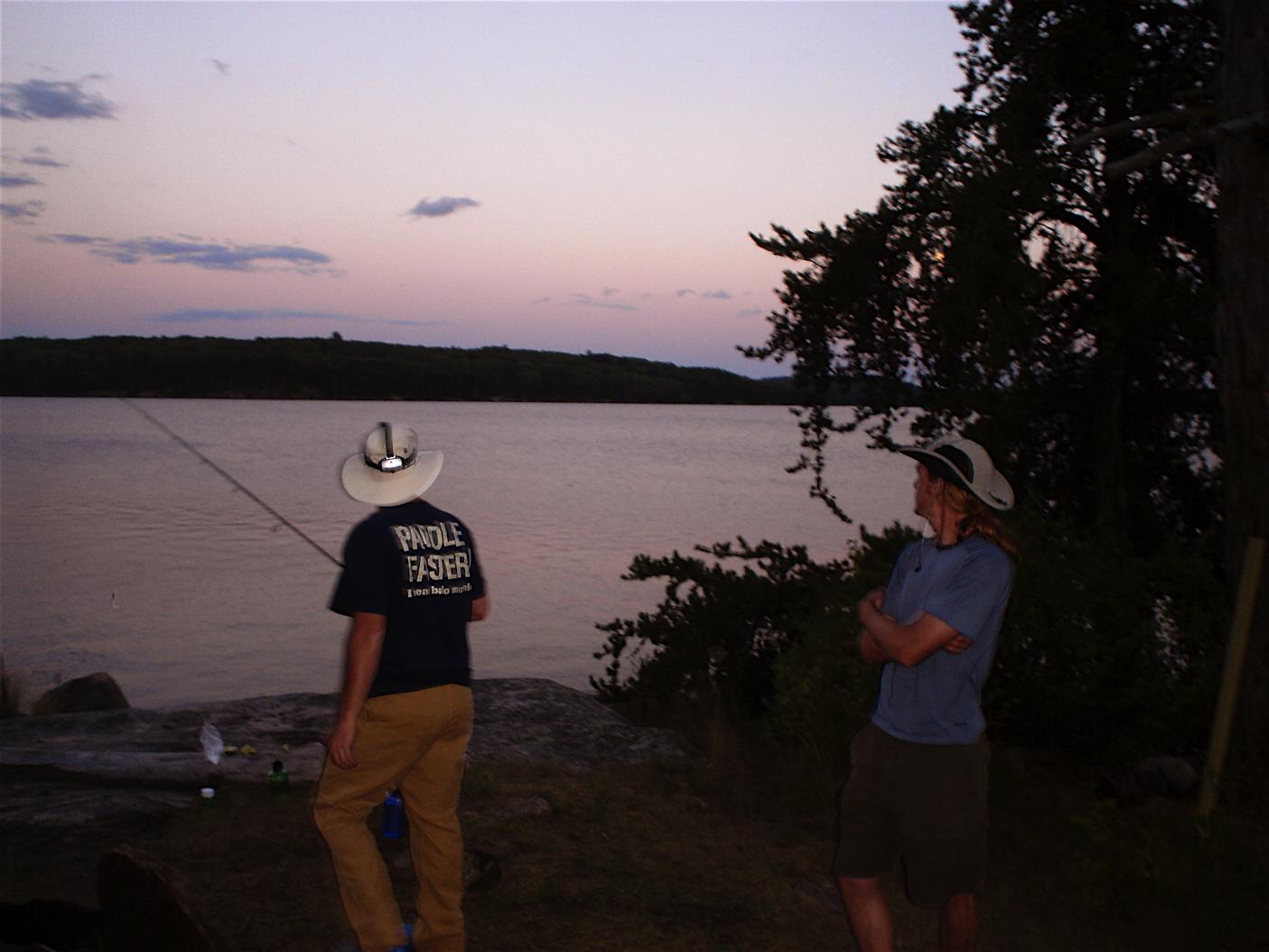