Slow and steady wins the race
by Gichimon

Trip Type: Paddling Canoe
Entry Date: 05/22/2022
Entry & Exit Point: Skipper and Portage Lakes (EP 49)
Number of Days: 7
Group Size: 2
Trip Introduction:
Dreams of canoe trips ferry us through the long winters of Wisconsin. We always book our trips in January on opening day of permit reservations for the two to three Boundary Waters trips we take each season. This year was no exception. Reservations were made, and planning commenced. And then February 18th happened. My wife was driving from our northern Wisconsin home to visit her aunt in Minnesota. I was headed the opposite way to visit my parents in east central Wisconsin. Krystal had two out of our three beloved dogs in the tiny Jeep Patriot with her. The forecast had called for some snow so we both left our respective jobs early to try and beat the snow. I had left about an hour earlier than she had. I was not more than 30 minutes from my parent’s house, and a call came in on my car. It was Krystal. Voice panicked, “Honey, I was in an accident. I’m hurt.” A snow squall had blinded all lanes of traffic and Krystal was slammed into the thick of a forty-car pile-up. The little Jeep was totaled, as was Krystal. She broke her back, broke her sternum, sheered her pelvis (look it up, it’s not pretty), bruises all over her body, and had blunt force trauma to her right hip. The jeep was hit four times. She was lucky to be alive. And yes, the dogs were traumatized but okay. They visited a vet right after the accident and were cleared with good health. After a few days in the hospital, she came home to heal and to learn how to walk again. Krystal’s a tough cookie. She worked hard to get better but our canoe trip dreams were put on hold, yet we were hopeful. As April neared, we had difficult talks about whether she could do a trip the last week in May. She went to her physical therapist and said I’m doing this trip, so what do I have to do to get there? Thus began the arduous walks through the neighborhood with packs on her back, lightly weighted, but with increasing weight as the weeks went by. She practiced tummy time like an infant to give her pelvis a rest as prescribed by the therapist. She moved and moved and moved her body because she was going canoeing! Almost three months to the day after that accident, we were driving up the Gunflint trail to paddle into the Boundary Waters. There are canoe trips, and then there are miracle canoe trips. I have never been prouder of a human being in my life as I watched my wife conquer the challenges this journey would present to her. But to date, this is my most favorite trip to the Boundary Waters because it happened, and it happened under the cadence of Krystal chanting, “Slow and steady wins the race.”
Discuss Trip: View Discussion Thread (6 messages)
Day 1 of 7

Sunday, May 22, 2022 Due to a horrible idea we had to try to squeeze two humans and three dogs in the back of our vehicle to sleep the night before the trip, we were up at the crack of a grey dawn. Definitely will not be doing that again! Needless to say, an early start was a good idea as we knew our pace was going to be a bit slower on this trip.
The general emptiness of the Poplar Lake parking lot surprised us. We have been to this entry point several times before and regardless of the time of year, it had always been packed. I supposed folks were generally scared off by the talk of high water, or maybe it was the colder weather. Either way, it was a nice feeling knowing we would not be battling for campsites from the looks of the parking lot.
As it was the first trip of the year, sorting out the bags and the canoes took a little longer than usual. The dog’s comfy pads were securely taped in the bottom of the canoes, fishing rods securely attached, bow rope fastened tightly, seat pads settled, and bags in their places. We were ready to set off! 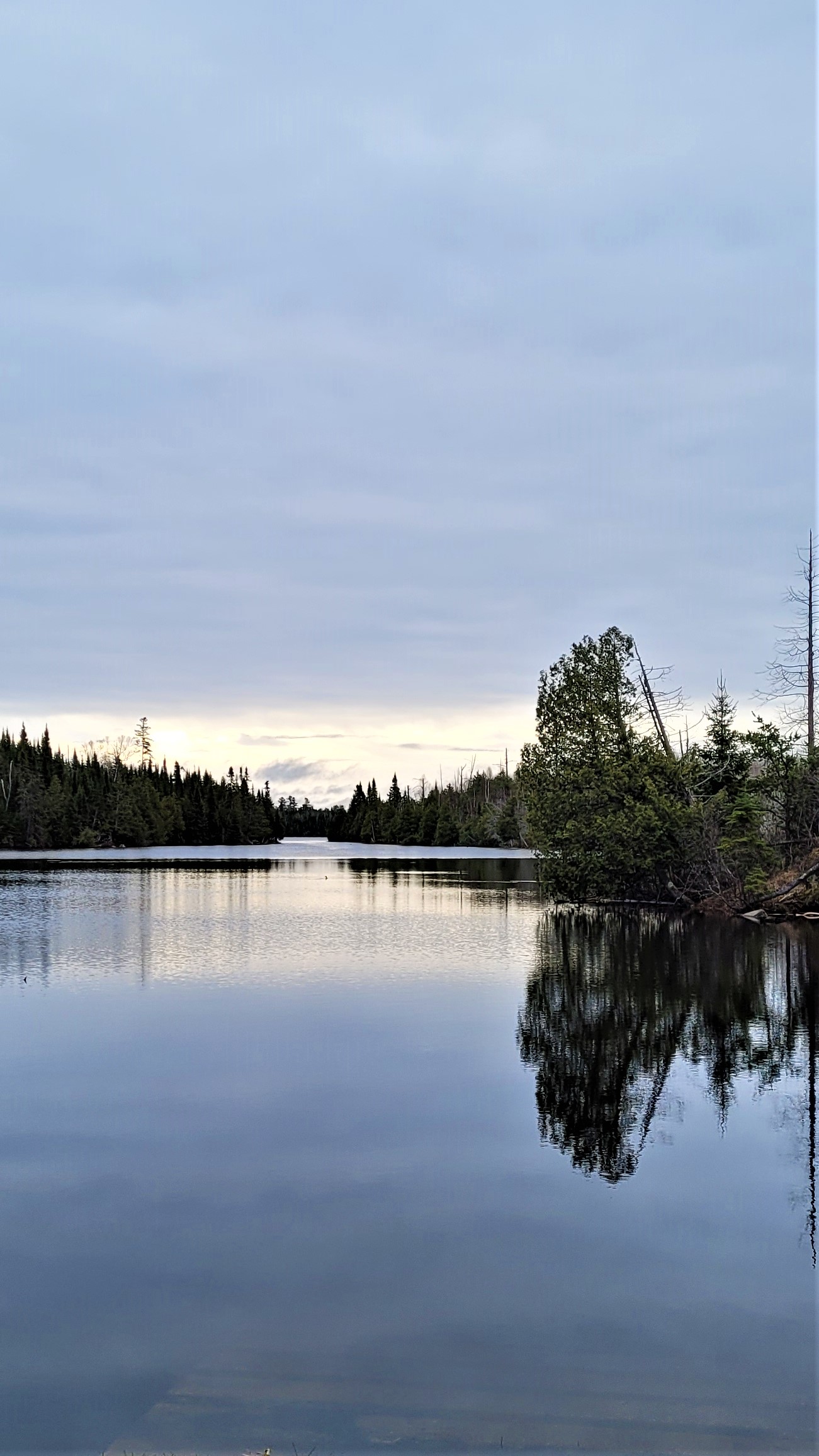 Glassy waters greeted us on Poplar Lake. We had a short and easy paddle, chatting and marveling at the serene waters to the first portage of the trip into Skipper Lake. This mile long portage would be the first real test for Krystal. Could her body handle the weight of a fully loaded portage pack, and then a second trip with her 38-pound canoe and another 25 to 30-pound pack on her back? With three miles of hard work ahead of us, we unloaded and sorted out who would do what first. Krystal wanted to do the portage pack first, which meant she was in charge of the dogs. The dog rustler is always the person portaging without the canoe, so I followed behind with my canoe and pack because the dogs like to go first.
After a gradual incline at the start of the portage, we stepped along the trail slowly. It was surprisingly dry for the late thaw we all saw this year, and with only a few mucky spots hardly worth mentioning. Krystal trudged along, slowly, but surely. Typically, on mile long portages, we leap frog about halfway down the trail. I knew there was a slight valley about halfway through the mile and figured we would stop there and go back and get the rest of the gear. I caught up with Krystal at the incline after the valley and posed that we leap frog at that spot. A definitive, “No! I am going the whole way!” was her response. And then as she powered forward, she yelled back, “Slow and steady wins the race!”
The portage to Skipper is a beautiful trail, lined with huge pines and sunny valleys. We encountered moose poop scattered everywhere, and could smell a bear nearby as we made our way to Skipper. And we made it. Round one of the portage was completed and complimented by the emergence of patchy sunlight and a freshly opened pack of beef jerky. I kept telling Krystal I could not believe she had just charged across that entire portage. She said she just felt good so she kept moving forward. Her hip was a little sore from the weight and the walk, and her pelvis was always sore, but all in all, that felt good too.
We headed back across the trail to get the second load. At the spot we had smelled bear, there was a fresh pile of bear scat on the trail that had not been there on our first trip. It always amazes me when fresh sign of a large animal like that goes unnoticed by our brilliant dogs. Normally, they would have noses to the air, sniffing greedily at the good smells. Alas, our brilliant crew missed the boat on the bear. The walk back went quickly and we were on our way with our second round of gear. The wind had picked up on this third trip and by the time we arrived back at Skipper Lake there were snow squalls blowing down the lake from the west between bursts of wind and sunlight. We waited out one squall and had another snack. Krystal was beat, and honestly, I was super tired too due to our poor night of sleep.
We loaded up the canoes, and headed out into beautiful Skipper Lake. The moody clouds and precipitation pushed off to the east and the sun emerged as we paddled into the wind. Our movement was slow but the sun felt glorious. We were paddling on the south side of the lake, trying to mitigate the pushier wind, and I saw the sloping rock face of the sole campsite on Skipper Lake. Knowing we had up to eight days to finish this loop, I looked over at Krystal hunched over in the wind, paddling forward, and I crossed the lake over to the campsite. I yelled over to her, "Let’s go camp at that site for tonight!" She happily agreed.
It's a gorgeous little site and we fell in love with it. In a moment of need, it was there to embrace our tired bodies. We set up camp slowly, and made some lunch. Our dried beef, mustard, cheese, and dehydrated pickle roll-ups hit the spot, and we washed it down with some sweet tea and Canadian whiskey. After we finished our backcountry cocktails, a nap was selected as our next adventure. It was about 1 o’clock in the afternoon and there was a definite nip to the air. The clouds were building again, so we ushered all the dogs and humans into the green tent. Not more than a few minutes after we got in the tent, the rain began to fall and it instantly lulled us to sleep.
What felt like a moment was really a three-hour nap, and it was another incomparable Boundary Waters snooze. We emerged from the tent to the sun shining through big puffy clouds and a calm ripple on the lake. I went in search of some firewood, and Krystal, who was feeling much better after the nap, went about tidying up camp and playing with the dogs. We double teamed the firewood and set it aside for an after-dinner fire. 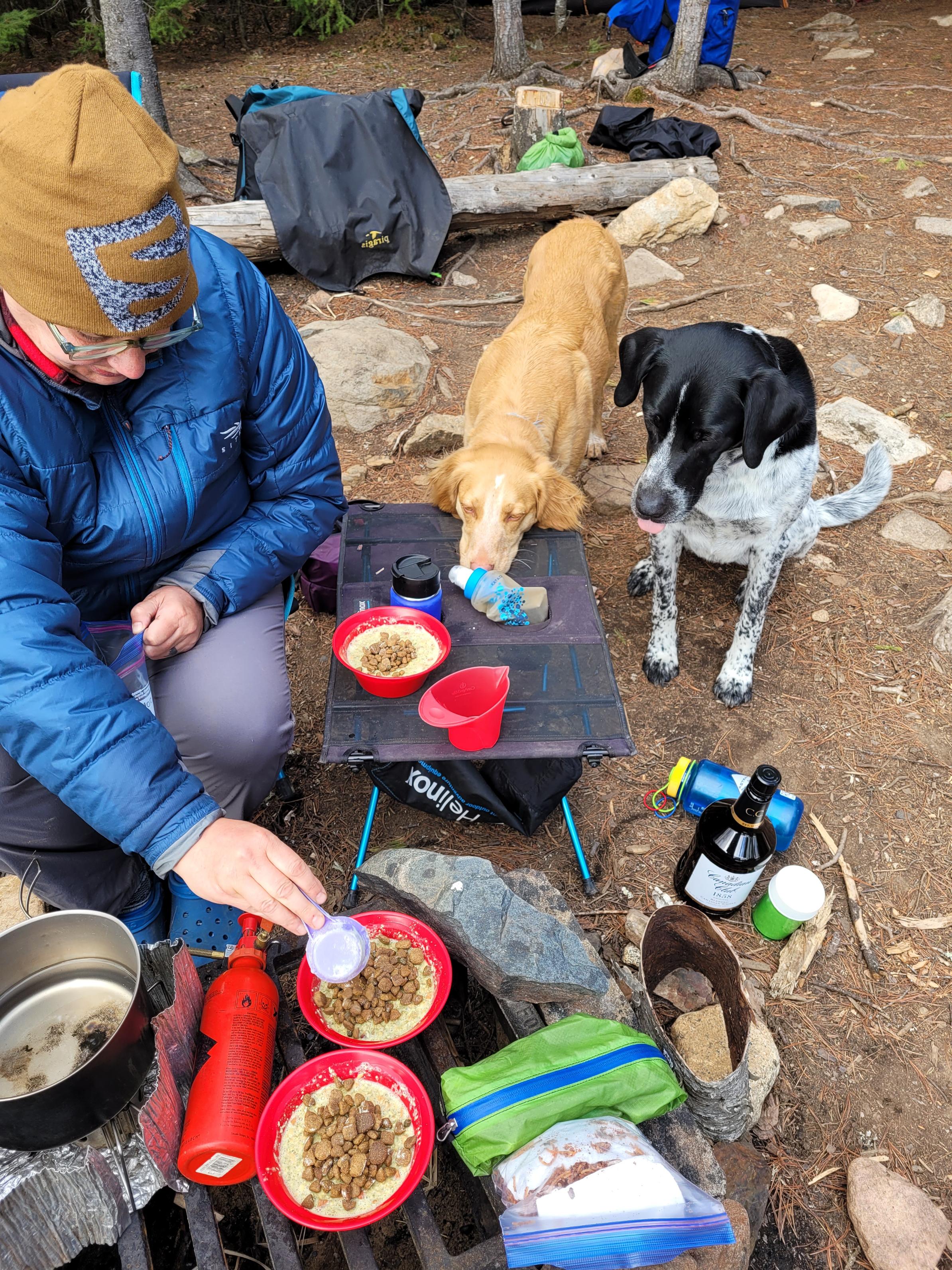 I am normally the dinner maker, so I settled into my spot to prep the dog’s food, and to get the human food going. It was dehydrated homemade spaghetti Bolognese for the humans, and the dogs favorite, dehydrated dog food rehydrated with warm water, and a little bit of kibble thrown in for good measure. We filled our bellies and then settled in to wait on the sun to set next to our warm fire. 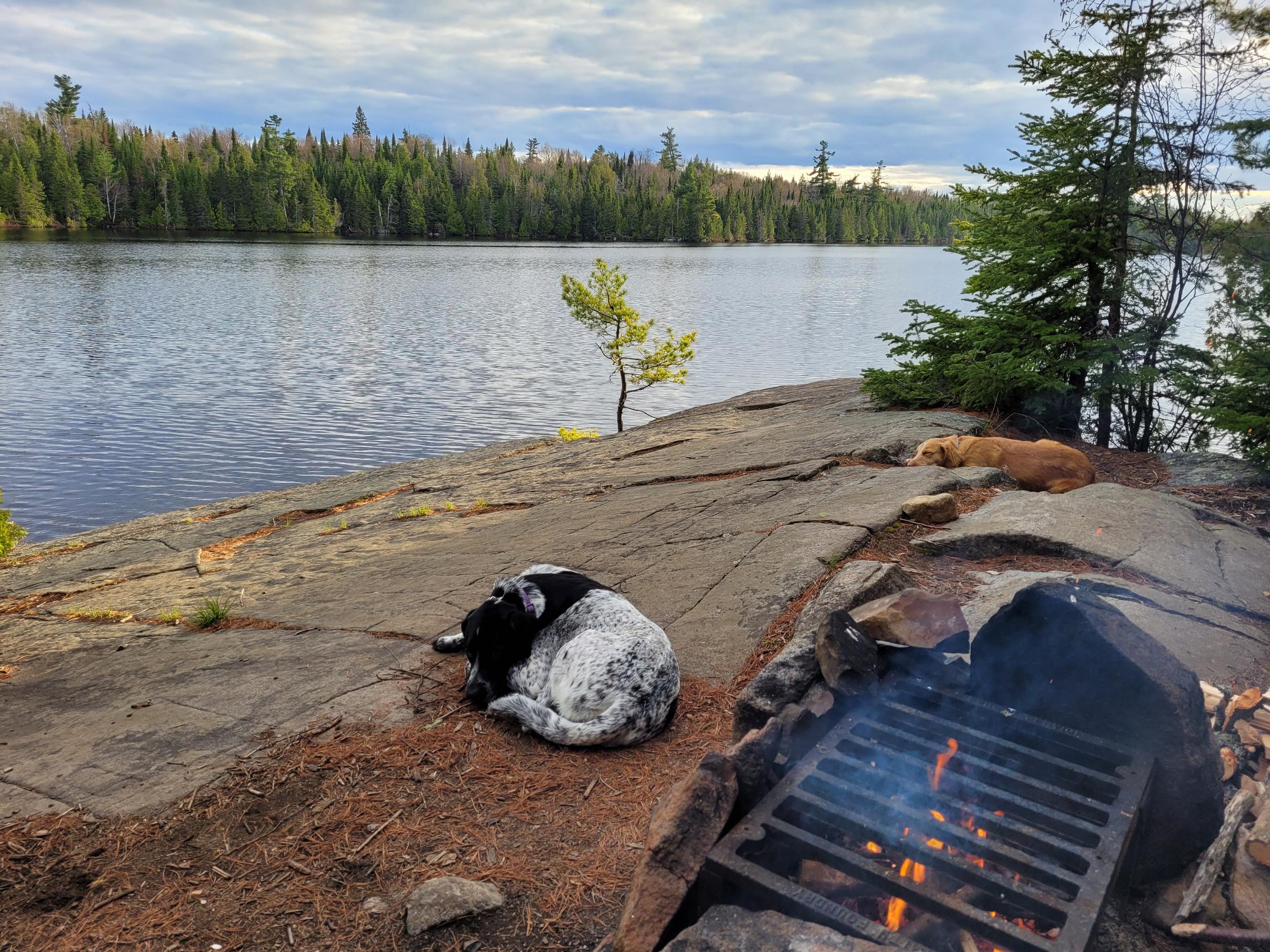 The nap paid off and we were actually able to stay awake until the sun set all the way. We rarely make it this long while out in the wilderness. But this trip, we would have more energy in the crisp late spring air and see our fair share of sunsets. 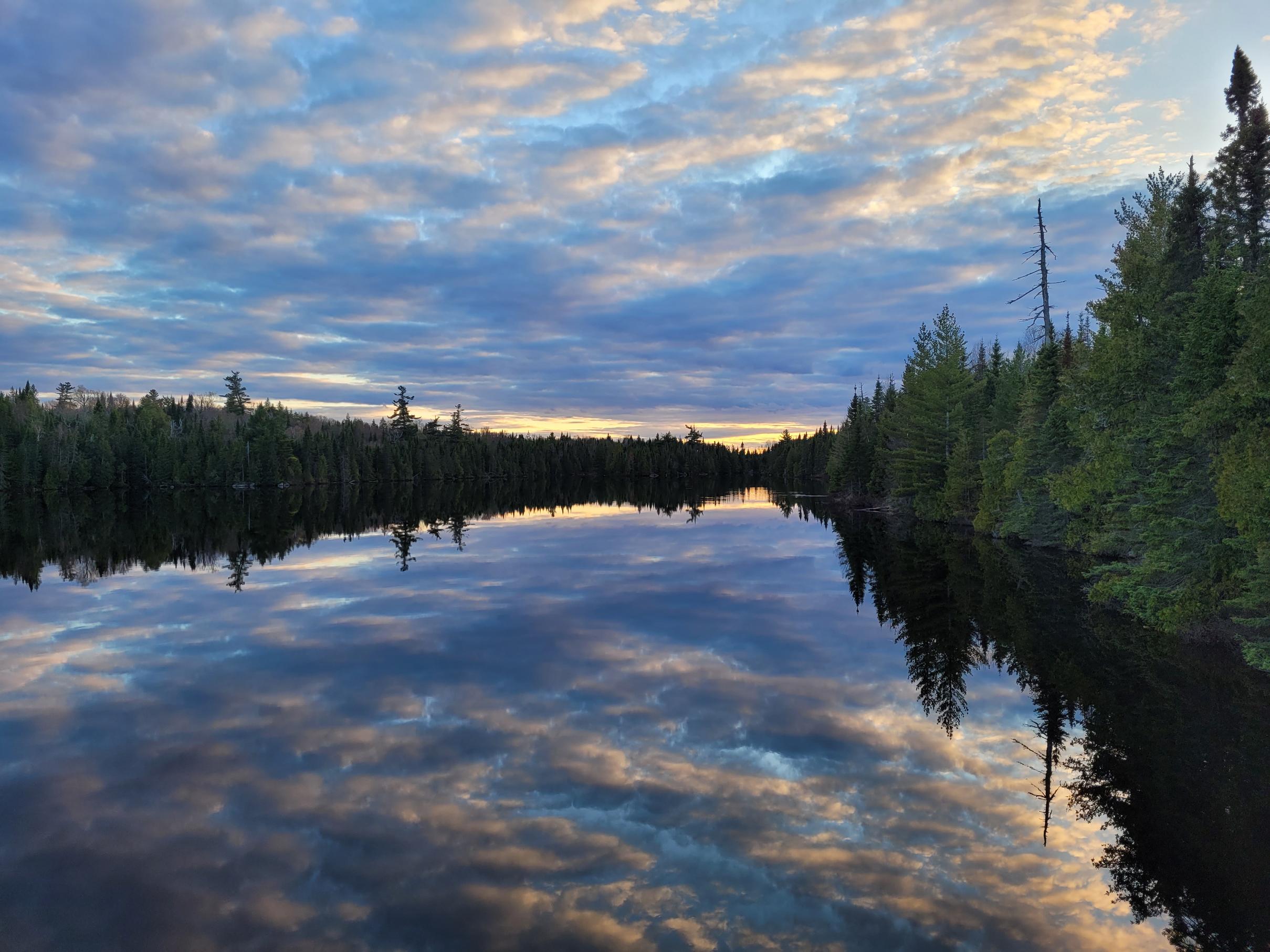