LIS Loop of Solitude
by loonatic

Trip Type: Paddling Canoe
Entry Date: 06/13/2022
Entry & Exit Point: Little Indian Sioux River (north) (EP 14)
Number of Days: 4
Group Size: 2
Discuss Trip: View Discussion Thread (8 messages)
Day 2 of 4
Tuesday, June 14, 2022 We woke around 6:30am to take down the bear barrel from the tree it was hung and start up the JetBoil for some morning coffee. After a breakfast of peanut butter and banana oatmeal, we noticed the clouds had rolled in and thunder was rumbling. The system was moving quite quickly and while we had started to pack up our site, we decided to sit tight for a bit. This was a smart decision as the system started to explode.

Lightning flashed and became a bit complex. Rain started to pour, and flashes of lightning and quick, loud thunder was ever present. Then came the hail! So much hail! Larger than marble size. (Hopefully I can share the video here to tell the story). The hail lasted for at least 5 minutes as we sat underneath the tarp and the campsite became quite saturated. Where I had sat and made coffee not long before became a little pond of water next to the fire grate. We decided to hunker down under the tarp for a while even after the storm had passed in case any other systems were to follow.

Finally, after the system appeared to be in the distance and we finished another round of coffee, we packed up our wet gear and started on another long travel day.

Hailstones lined portages as we went from Eugene to Little Bear Track, Bear Track, and Thumb lakes. We made our way to Finger and Pocket lakes, stopping on Pocket Lake for a dehydrated lunch. Pocket had one campsite filled, our first group we had encountered since Loon Lake. We noticed a second group paddling into Pocket Creek before we put our lunch away and started again to our next destination. Clouds prevented any sunshine for most of the day. We made our way through a short bit of Pocket Creek into Ge-be-on-e-quet creek and into Ge-be-on-e-quet Lake.

The group that had been paddling before us had just arrived at the northern campsite on Ge-be-on-e-quet, so we elected to paddle a bit further and set up camp at the southernmost site before the portage into Green Lake. We wanted to try to get to Oyster Lake that day but decided to set up camp a bit earlier than planned to air out our wet gear from the storm that morning.

We spent the late afternoon catching dozens of small mouth bass on Mepps spinners and enjoyed a nice fish fry that evening. No walleyes were caught with other lures, but we had a great time catching smallies and that was enough for us! We cleaned our fish across from our campsite on an island and buried the fish remains far away from shore and paddled back to our campsite with our fillets ready for the fry pan.

Angry clouds continued to loom over us, and the sunset came quick. Because that campsite is quite small, and we anticipated more rain, we elected to hang our tarp above our tent for added rain protection. Prepping for the evening, we hung our barrel in a tree as far away from the site as we could and fell asleep again with books in hand as some drizzling rain came and went.

About 1:30am, I woke to what sounded like a stick or twig snap. I brushed it off at first, but then heard a few more. I sat up in my sleeping bag on my pad and listened again to heavy footfall.

“Hey! Get out of here!” I shouted, waking Emily, and we both grabbed our headlamps. Unzipping the tent, we heard quick and heavy footfall and some crashing in the brush down from our tent on the other side of where our canoe was located and where we had hung our barrel. Grabbing a couple of pots from the fire grate, we made some noise and did a perimeter search with our head lamps.

After determining we were alone again, we went back to the tent and after an hour, Emily fell back asleep (though with a headlamp on her head). It took me until about 4am once the loons started to call and the birds started to sing to finally crash from the adrenaline rush and catch a few more hours of sleep. The next morning, we found a few bear tracks near our canoe and near the tree where our food was hanging. The closest track we found was about 15 yards from our tent! I had definitely slept through most of our guest’s visit and had woken only when it had stepped on some fallen branches, loud enough to wake me! In conclusion, keeping a clean campsite and hanging our food was a good decision – and hopefully our encounter isn’t replicated as the summer progresses. No food was taken, no further interactions at the site were had. We figure we may have been one of the first visitors to this campsite this season – and remember we are guests here! 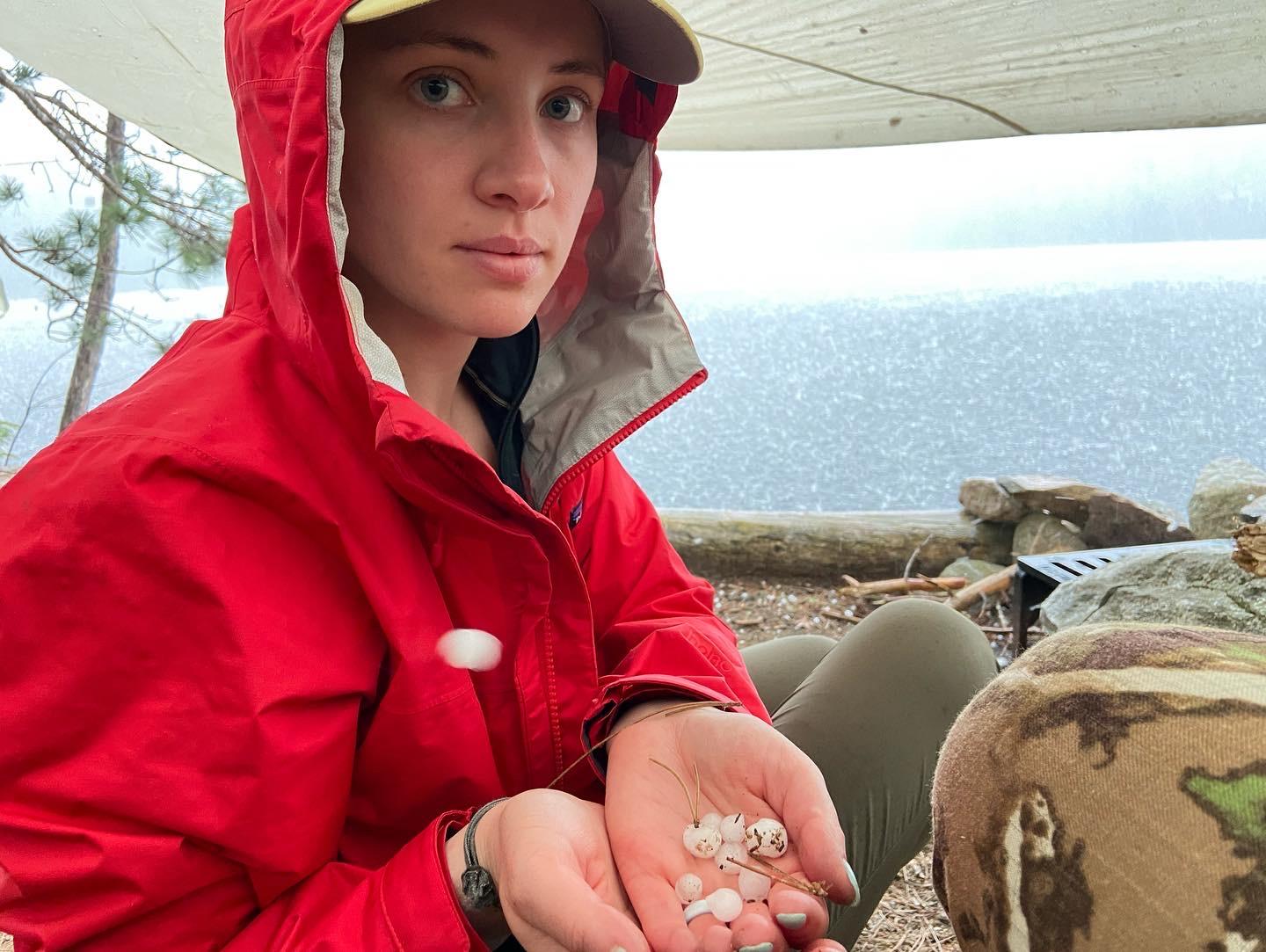 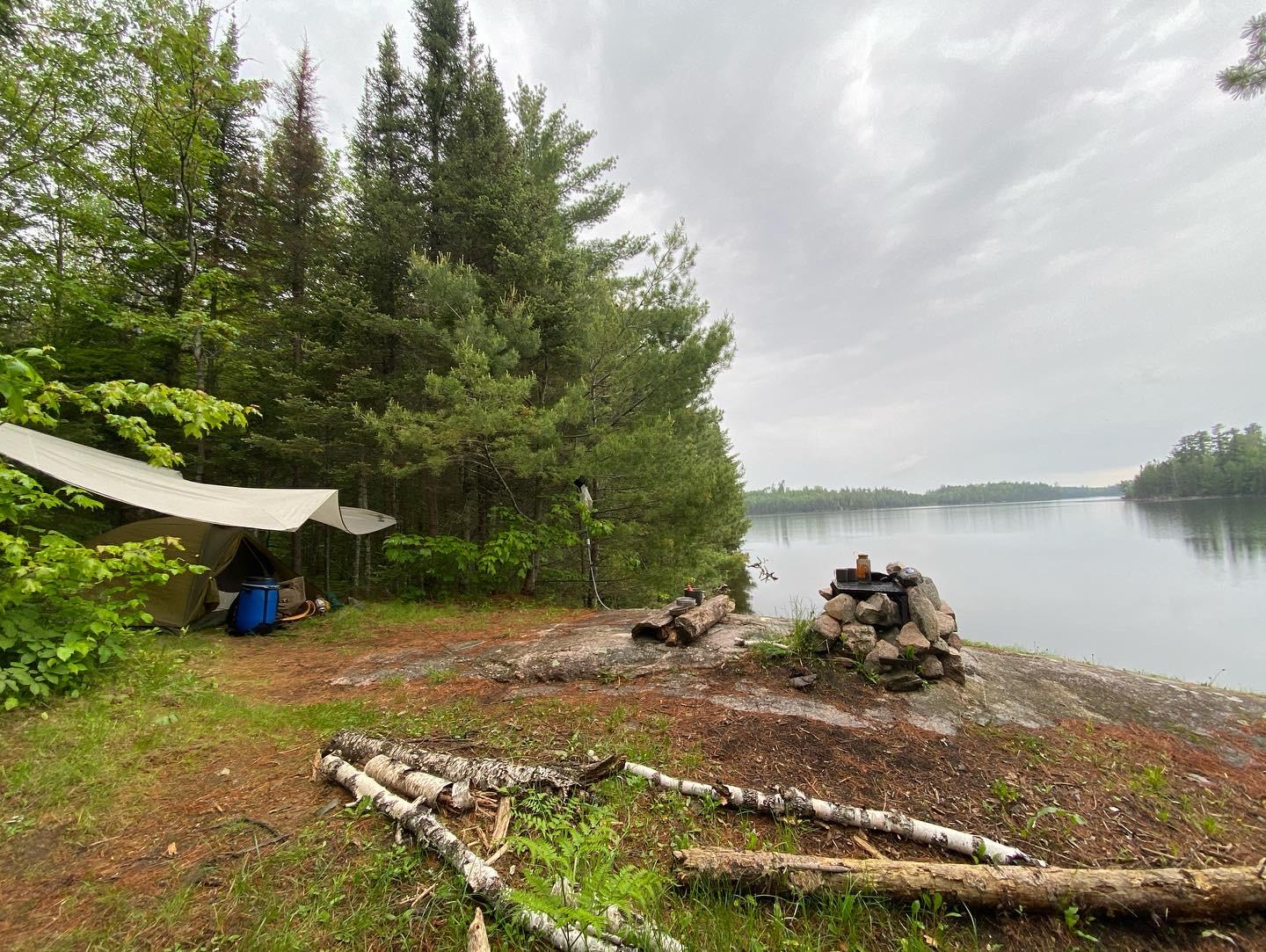