Trip Type: Paddling Kayak
Entry Date: 05/30/2022
Entry & Exit Point: Other
Number of Days: 3
Group Size: 2
Trip Introduction:
This Spring I was able to go on 3 different trips to a section of river that has trophy Smallmouth potential and had done well the previous 2 years after discovering it in 2019. I had went on Memorial Day the last 2 years and one other time either a week or so before or after Memorial Day each year. This year I was able to carve out time for 3 separate trips and was awarded with some very big Smallmouth bass. I will include all 3 trips in this report.
Discuss Trip: View Discussion Thread (7 messages)
Report
My first trip this year was on Thursday, May 26th. The temperature was around 70 degrees with 5-10 mph wind. The weather was partly cloudy. I picked up a friend and his kayak and headed to the river. We arrived around 9am. The water level was a little bit above average but nothing to substantial. We got loaded up and headed out on the river. We started in a high percentage area where I had done well in the past but had very little action. He missed one and I caught one little pike in the first hour. We then transitioned to a backwater area that they are typically packed into during the spawn. I figured that they were still a bit away from the spawn with the cold spring but figured that area would have the warmest water and that it would hold the most fish, but we had not luck and did not see anything either at all.

We slid back out into the river and fished around the timber and underwater rock structure along the shoreline. I had a couple Muskie or Pike slash at my bait a few times but I pulled it away as I would not be able to land big toothy fish on my tackle. I finally caught the first Smallmouth about 2 hours into fishing. It was one of the coolest bites I have witnessed. I was fishing a down log jam with a mat of debris closer to the shore. I had made a few good casts and twitched my fluke right along the log and mat but no such luck. I repositioned my kayak along the outermost log to keep the current from moving me downstream. I took a couple more casts but still noting. I was just about to move on and decided to take one more cast with the new angle and as I twitched the fluke past and underwater log a big Smallmouth darted out and inhaled the bait on the pause. I would guess the fish was no more that 12-15 feet from the kayak for this eat. It was probably quicker in real time than I picture it in my mind as it was one of those cool slow-motion moments. That Smallmouth taped just shy of 21”. I continued to fish along timber as I headed upriver. 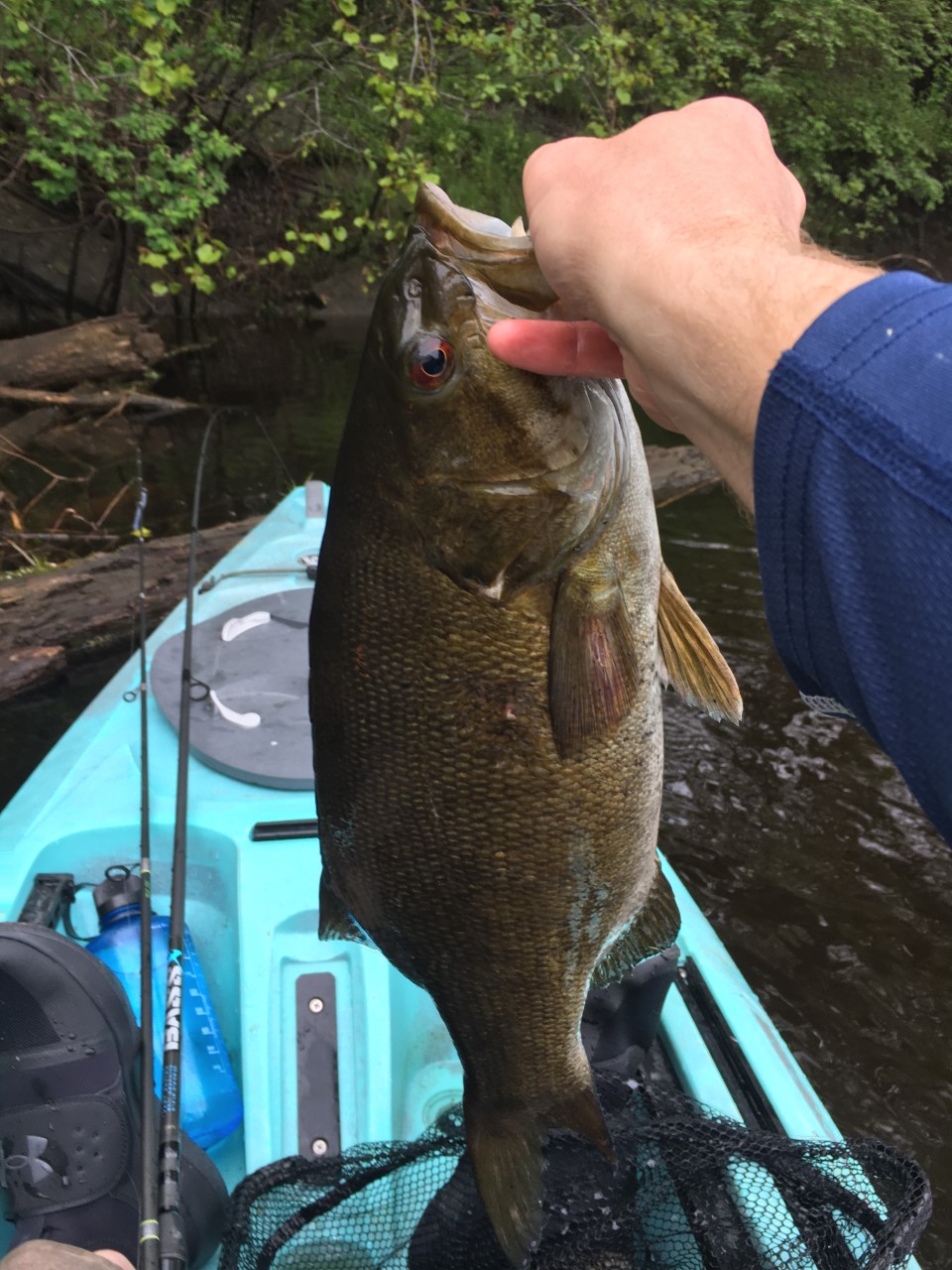 This river has a lot of overhanging branches. The great thing about fishing the fluke is that you can skip it right underneath structure right up along the bank. This is often where the fish are sitting during this time of year. This was the scenario for my next catch. I skipped my bait right underneath some vines and overhanging branches and a Smallmouth sucked it in off the surface and started to go sideways. This one had a lot of spunk and gave a good fight and taped at 19”. 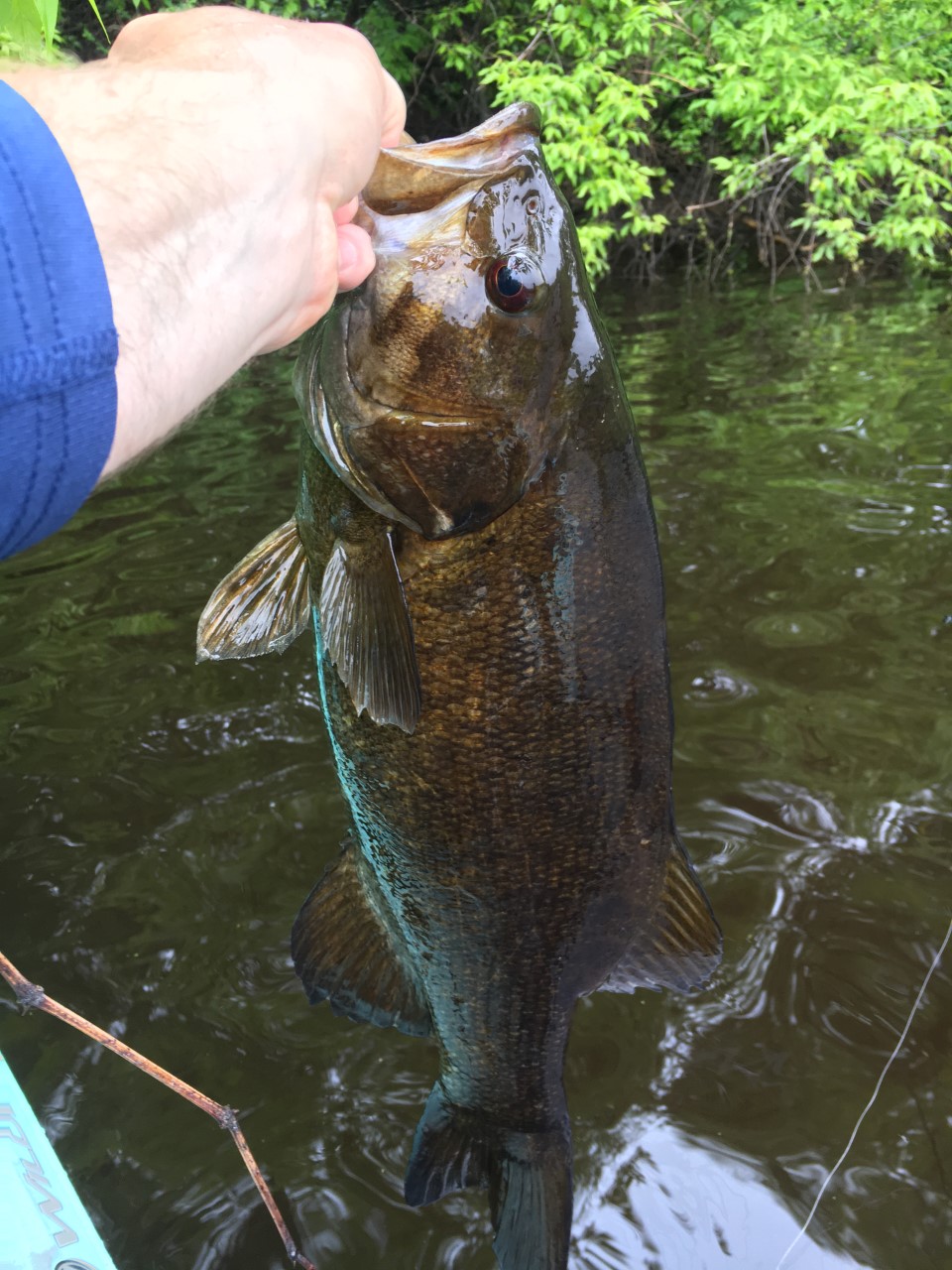 My next couple spots that are usually my best did not produce any fish. I did catch another small pike and my fried caught a low 30s pike as well. My next bass was also a pretty cool eat. I skipped my lure a little too far up into structure so had to paddle in to retrieve it. There was a little pocket of water with some great timber structure that was too inviting to pass up now that I was in close there anyways. This was another amazing eat that I really wish I had my GoPro with to capture. This one was very close quarters with the fish not more than 10 feet from me when it darted out of the timber to smoke the Fluke. This was another 20+” fish. 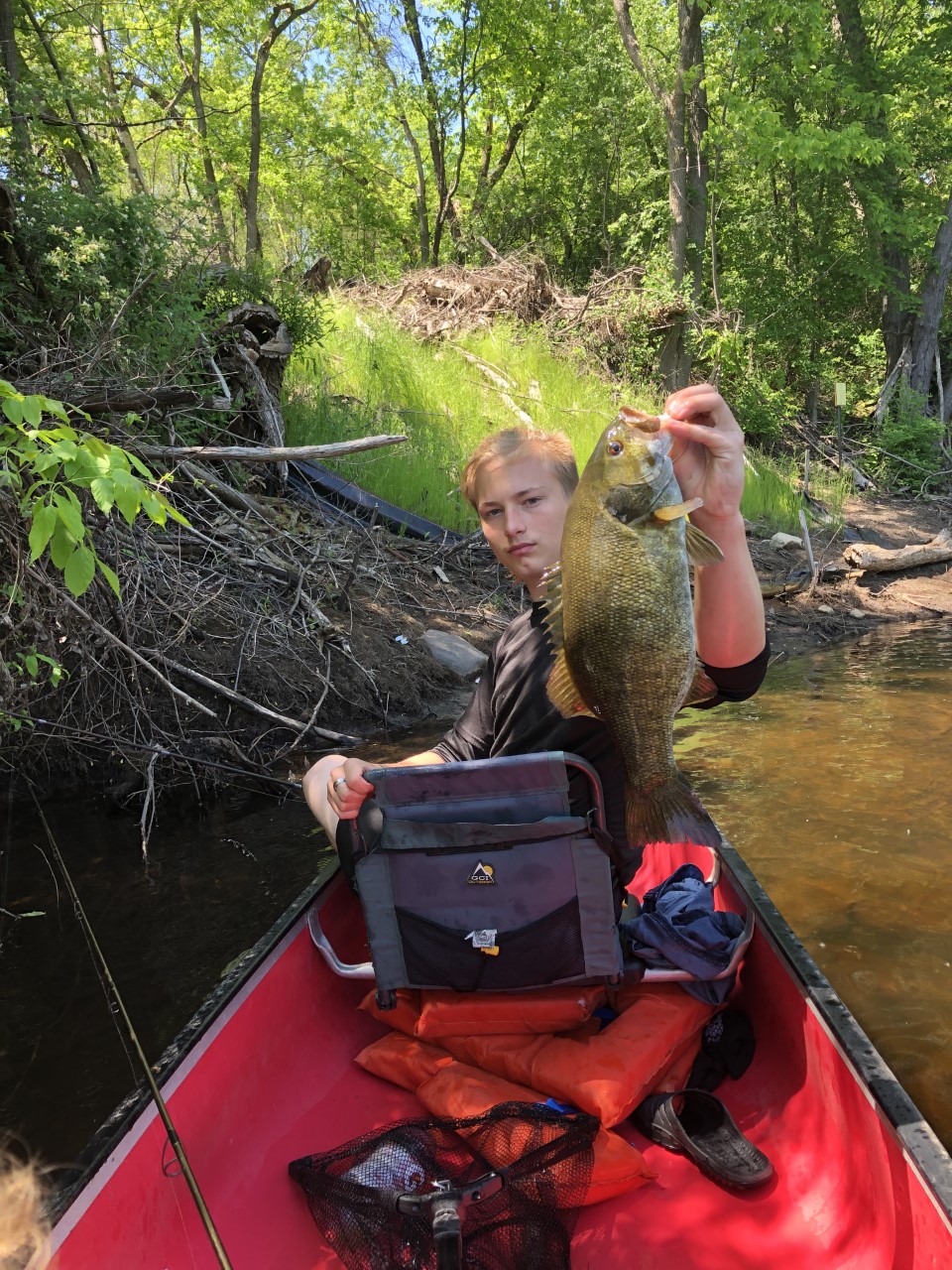 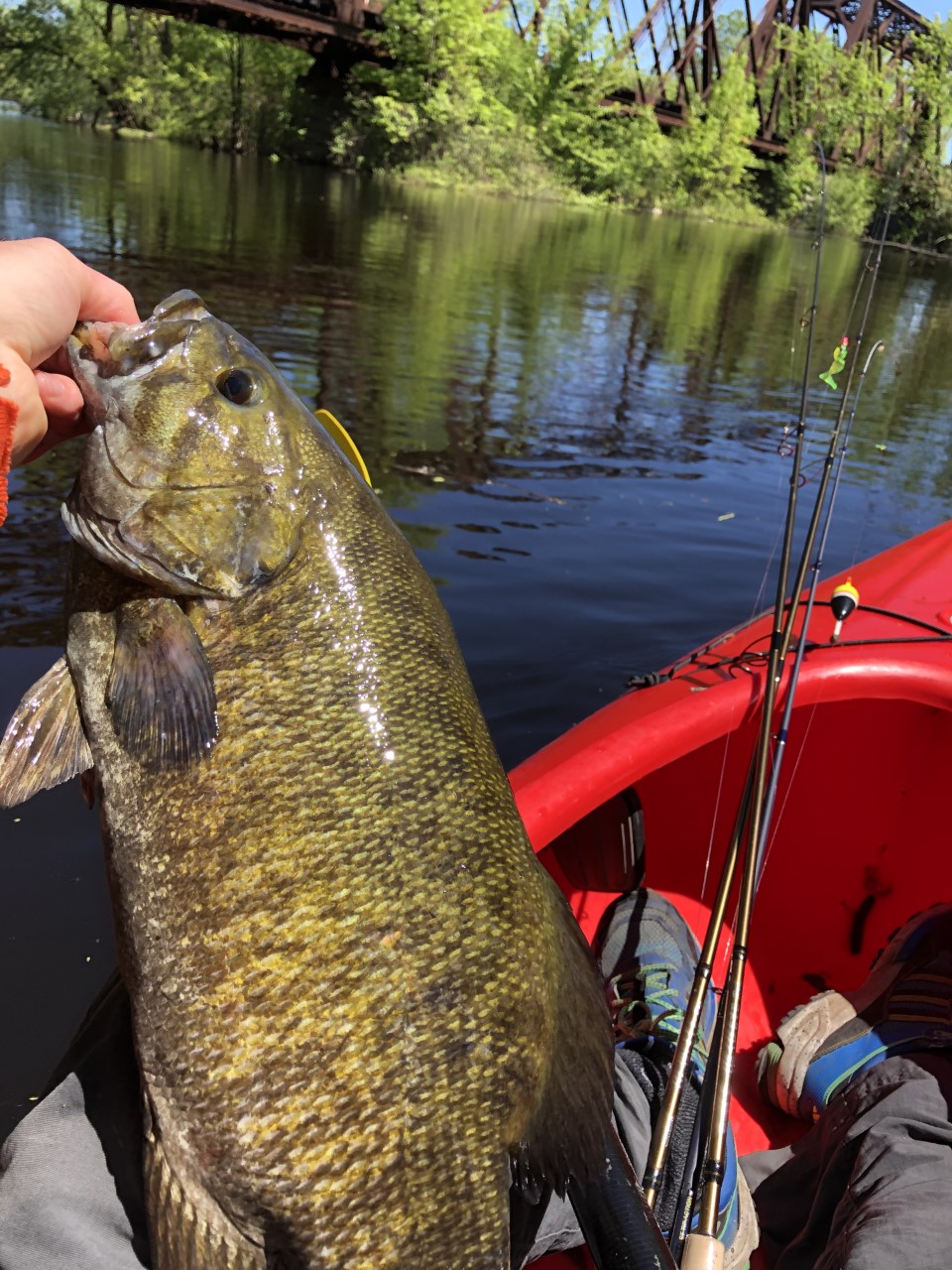 I caught a couple other Smallmouth bass all 17-19” that were all fighting and fun Smallies to catch.

The last specific catch of this day tied my PB smallmouth at the time. This fish was also on the fluke tucked in tight to the timber. This one flashed at my bait first then came back and inhaled it on the next pause of the retrieve. This Smallmouth was the most beat up and old fish that I have caught. He was very close to stretching the tape to 22” but did not quite reach that mark but it was stocky so I called this my PB Smallie to this date. 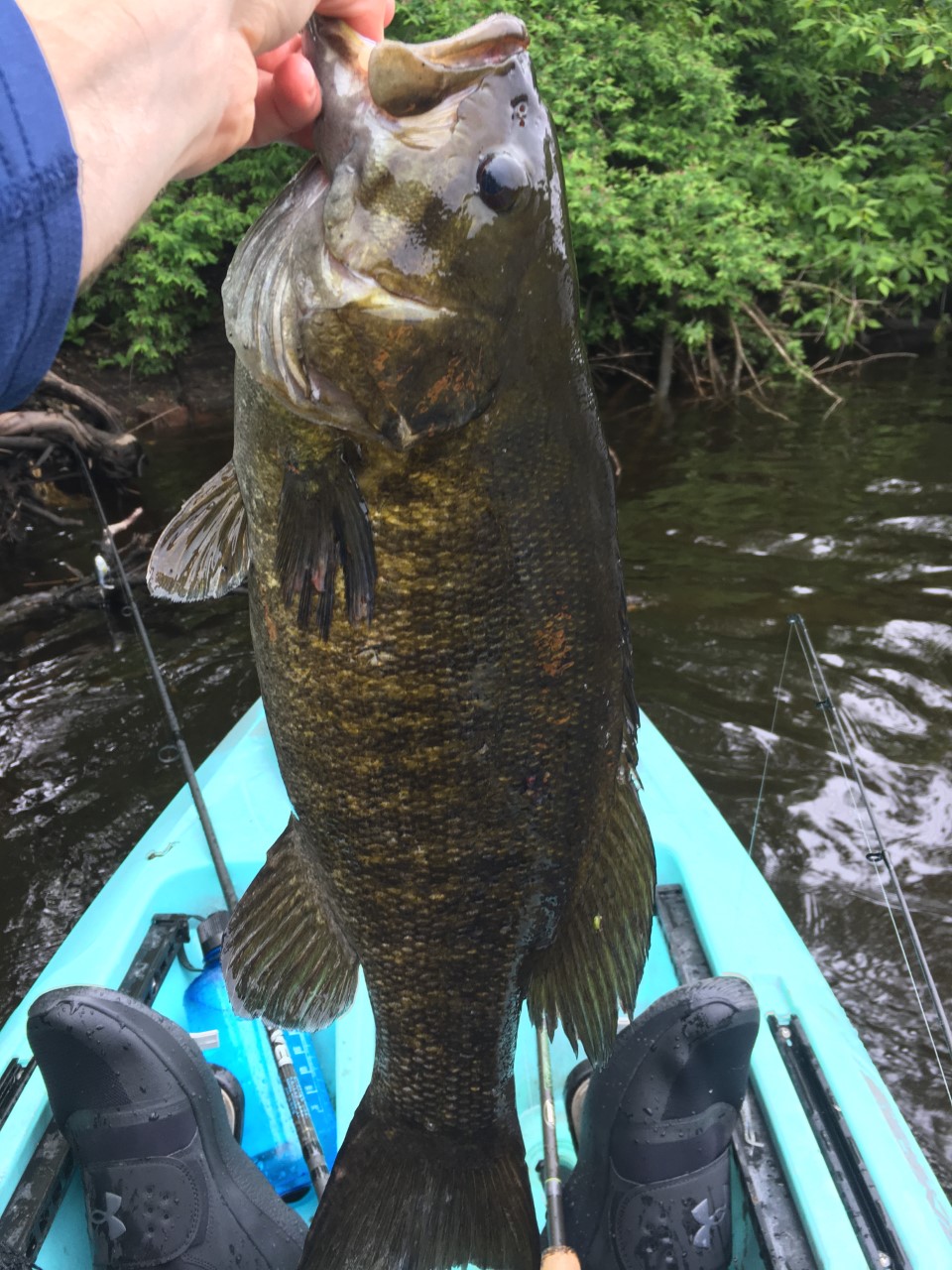 On this outing I caught 8 Smallmouth and 2 pike with the Smallies all being 18-21.75”. I do not think I have ever caught a Smallmouth bass under 16” in this area.

The next outing, I was by myself in a Kayak again. It was around 70 degrees with 5-10mph wind. It was mostly cloudy weather for the day. I arrived around 9am again for the day. I fished the same spots as a few day previous but only caught 2 Smallmouth both around 18”. There was a lot of boats around as it was opening Muskie fishing that day. I am not sure if any of the boats were targeting bass but they were making a lot of commotion. I knew what I had in this one spot so I decided to spend some time exploring new water and headed downstream several miles to try to find different areas to fish in the future. Long story short, I fished for several hours with minimal action and only caught 3 fish. One small pike and an 18” Smallie and the smallest one I have ever caught on this river probably around 14”. All were on the fluke. I did throw different lures as well. I was on a little bit of a time crunch on this outing so wanted to hit my prime area at least a little bit before I had to head out.

I am methodical about how I fish really wanting to hit the prime areas well with multiple casts. I hit the inside edge of a tree well along some structure with no action. As I took a couple paddle strokes upriver, I decided I should take a couple casts at the outer edge of the bushy tree that hung out over the water. I made a long cast the ended up perfectly right on the edge of the Shade. There was a wake that came in from the side and intercepted my bait and kept going. I set the hook and I saw the shape of a long and huge fish go in and out of the shady and sunny patches. I assumed due to how it ate and the size that it was a musky. As I fought the fish in towards my Kayak I realized it was an enormous Smallmouth and my hear started to race. I knew this was a special fish. He would not let me move him much and he did whatever he wanted for a while until I was able to begin to tire him out and wrestle him into the net. I was shocked at how big this Smallmouth was. I removed the hook and left him in the net as I got out my phone and tape measure. I gripped the end of the tape with my thumb that was holding his lip and stretched the tape out and snapped the fist picture and gasped with the tail stretching to the 25” mark. After taking the first picture I realized my thumb was holding at the 1.5 “ mark of the tape. I readjusted and pulled the fish and tape tight, and she went 23.5”. My biggest Smallmouth by a lot. Unfortunately, I did not have a weight scale with me to get a weight measurement, but I am calling her 6.5 pounds. I have had several big-time bass fishermen tell me that she probably went 7 pounds but I do not feel comfortable claiming that without an official weight on it. 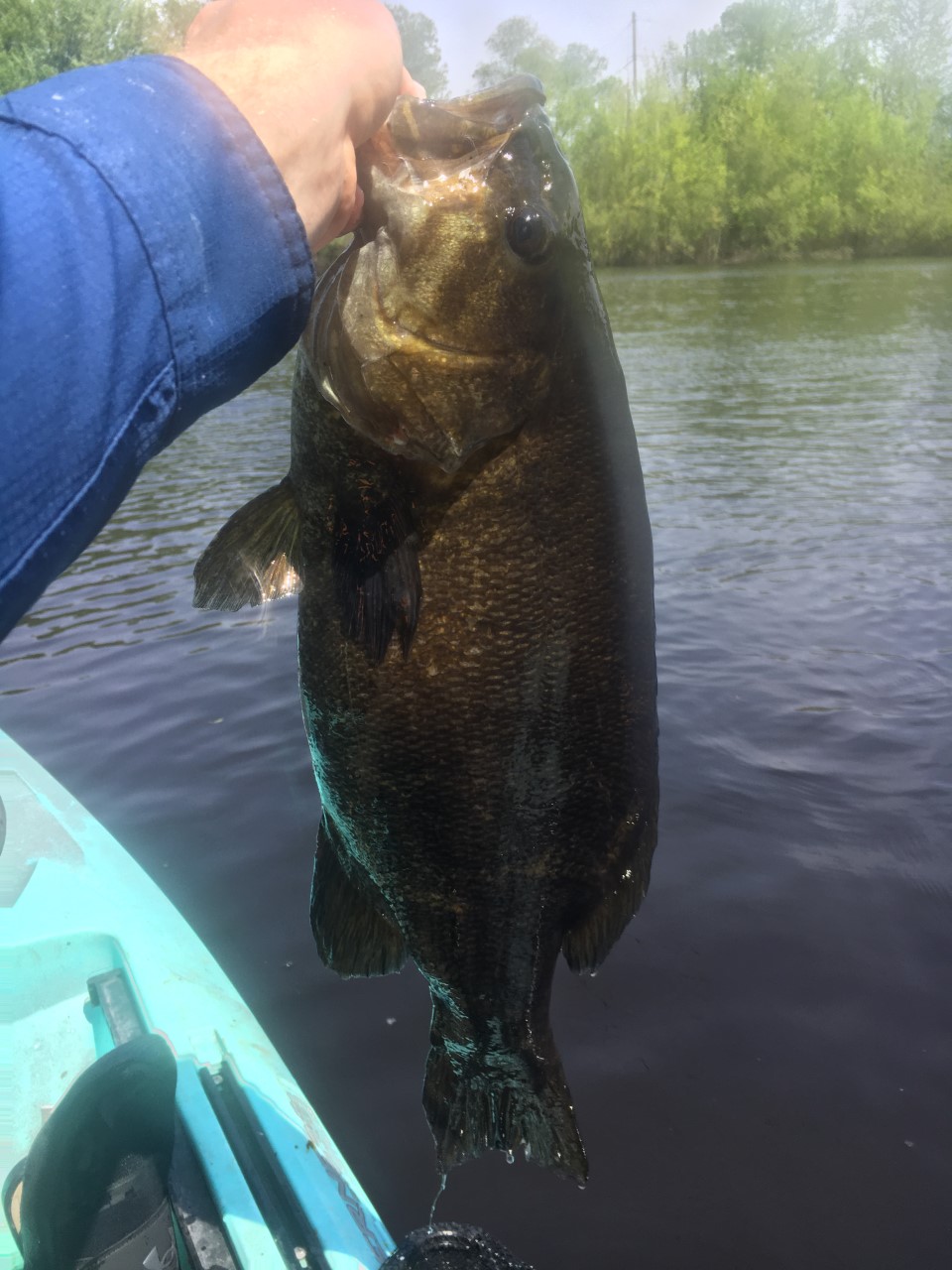 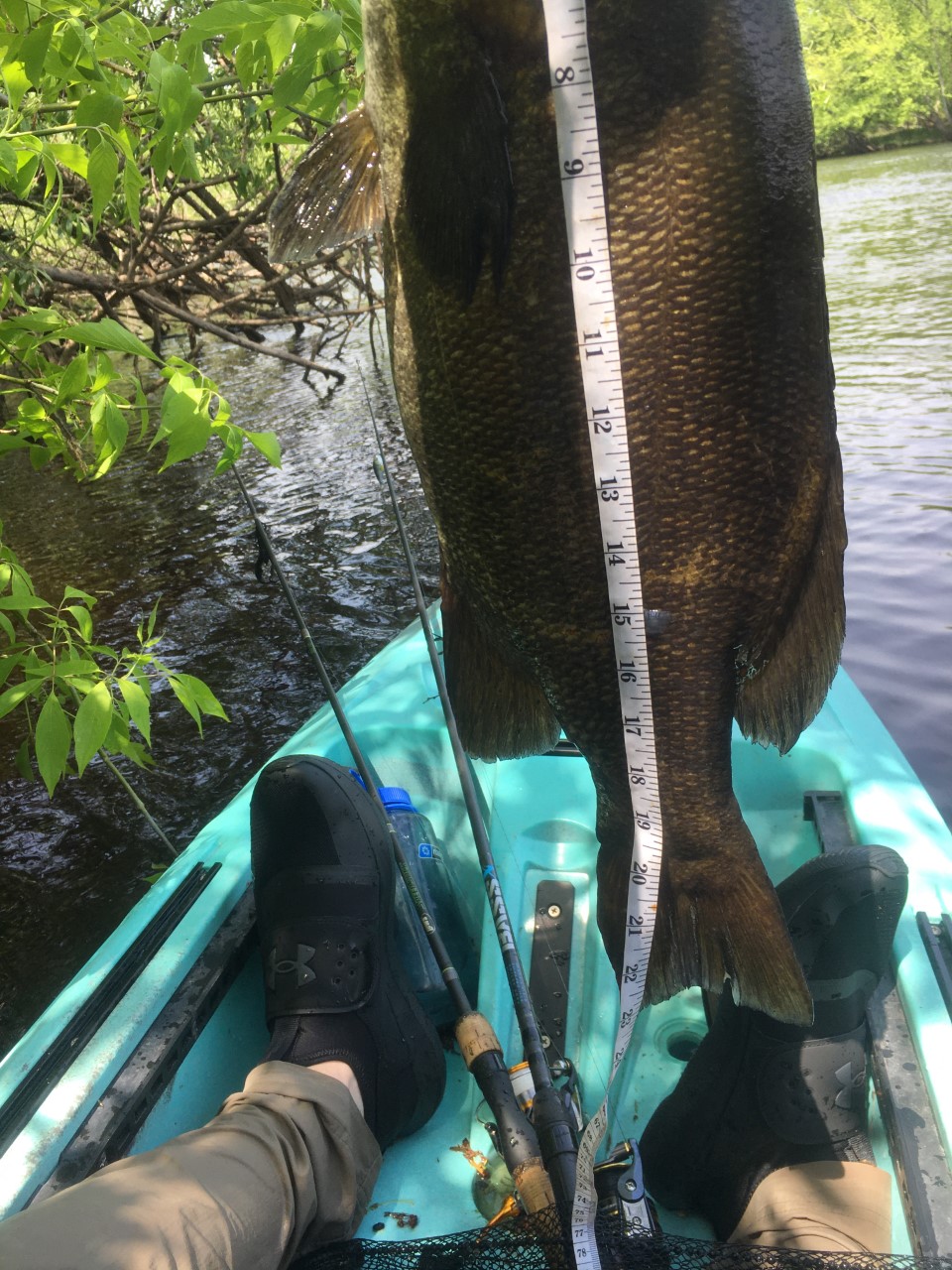 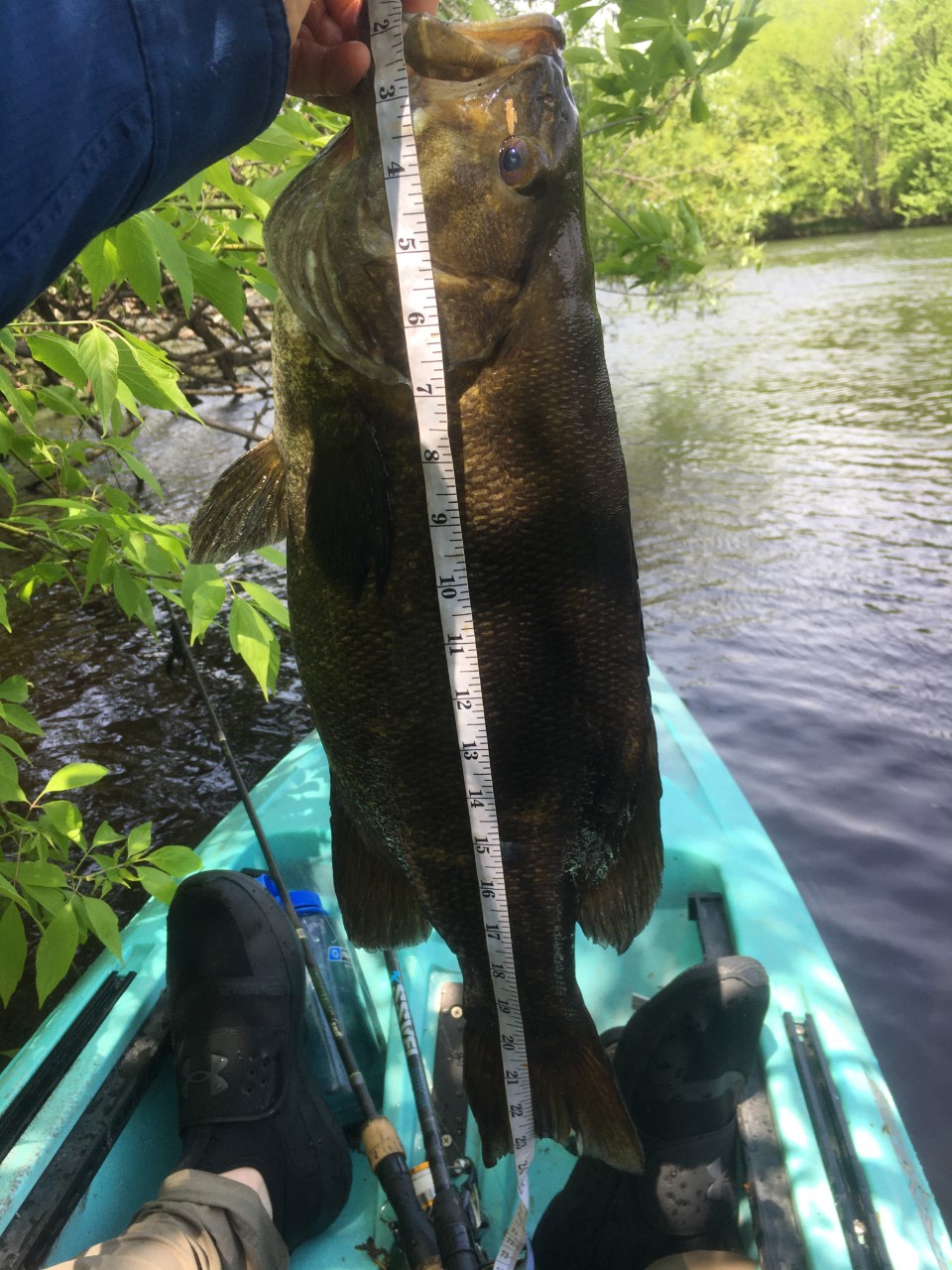 I took a minute to collect myself and got back to fishing a little further up the bank before I left. I caught a couple other nice bass but nothing over 20”. Then I decided to skip the fluke into a shady area with some rocks and saw a Smallie explode on top but he missed the bait. I cast back into the structure and put it into some sticks. I pulled it partway out then my line all the sudden started to go sideways. I set the hook and reeled in another 21” trophy Smallmouth. I decided to end the day on that. I caught 9 Smallmouth bass on this day and my new PB at 23.5”.

The final outing was a couple weeks later June 12th. My best estimation is that they spawned the week following Memorial Day this year, but I am not certain. I never saw any beds or saw fish on beds at all. I got a friend to come with. He has a small boat that can handle skinny water, so we were able to fish out of that for this trip. The part I love about this area is that the fish I catch are not accessible to anyone other than those fishing from kayaks or canoes. We decided to explore with the motorboat and target Muskie to start the day. We went a few miles down river and made a token effort on the Muskie and bass mostly throwing a whopper plopper. In hindsight I should have thrown the fluke more. My friend did throw a spinner and jerkbait some. We had a couple follows that we think were muskies and caught a few smallmouth and pike in the first couple hours.

I had the loudest topwater hit that I have had. I through my whopper plopper right next to a log jam with a debris mat as well and a giant Smallmouth came out and slammed it with some authority. It was a very cool eat as well. Unfortunately, this fish got off right as my buddy was trying to scoop him into the next. I also lost a mid-30s muskie in a similar fashion. Also, on a whopper plopper. We probably should have landed both fish, but my buddy was a little rusty with the net. It was not a big deal, and he did feel really bad. We eventually made our way back upriver to my prime spot and slammed the Smallies once again for the last hour before we had to leave. There was one point where we caught 5 Smallmouth bass on 5 straight casts between the two of us. I was throwing the fluke and he stuck with the whopper plopper. They seemed to like both baits a lot. 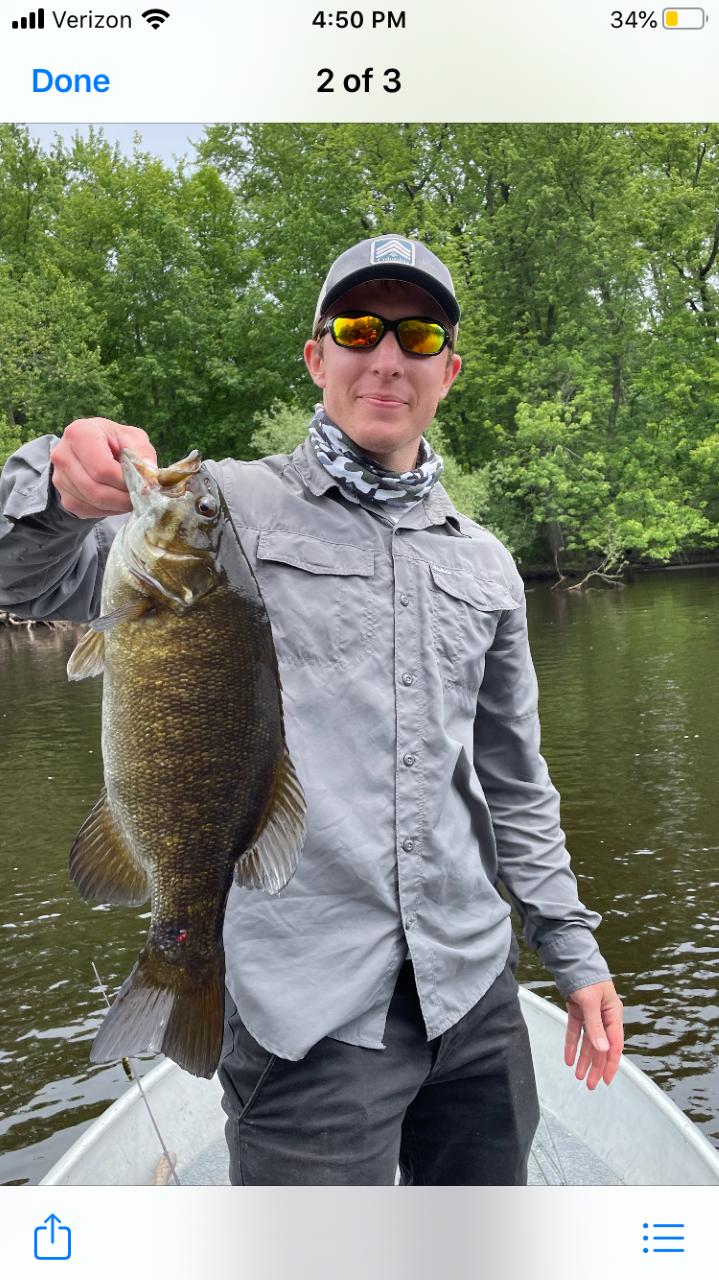 It was a pretty awesome Spring and I feel very fortunate to have experienced catching these beautiful Smallmouth bass. The bronzebacks are sure a fun fish to catch with their power and spunk. 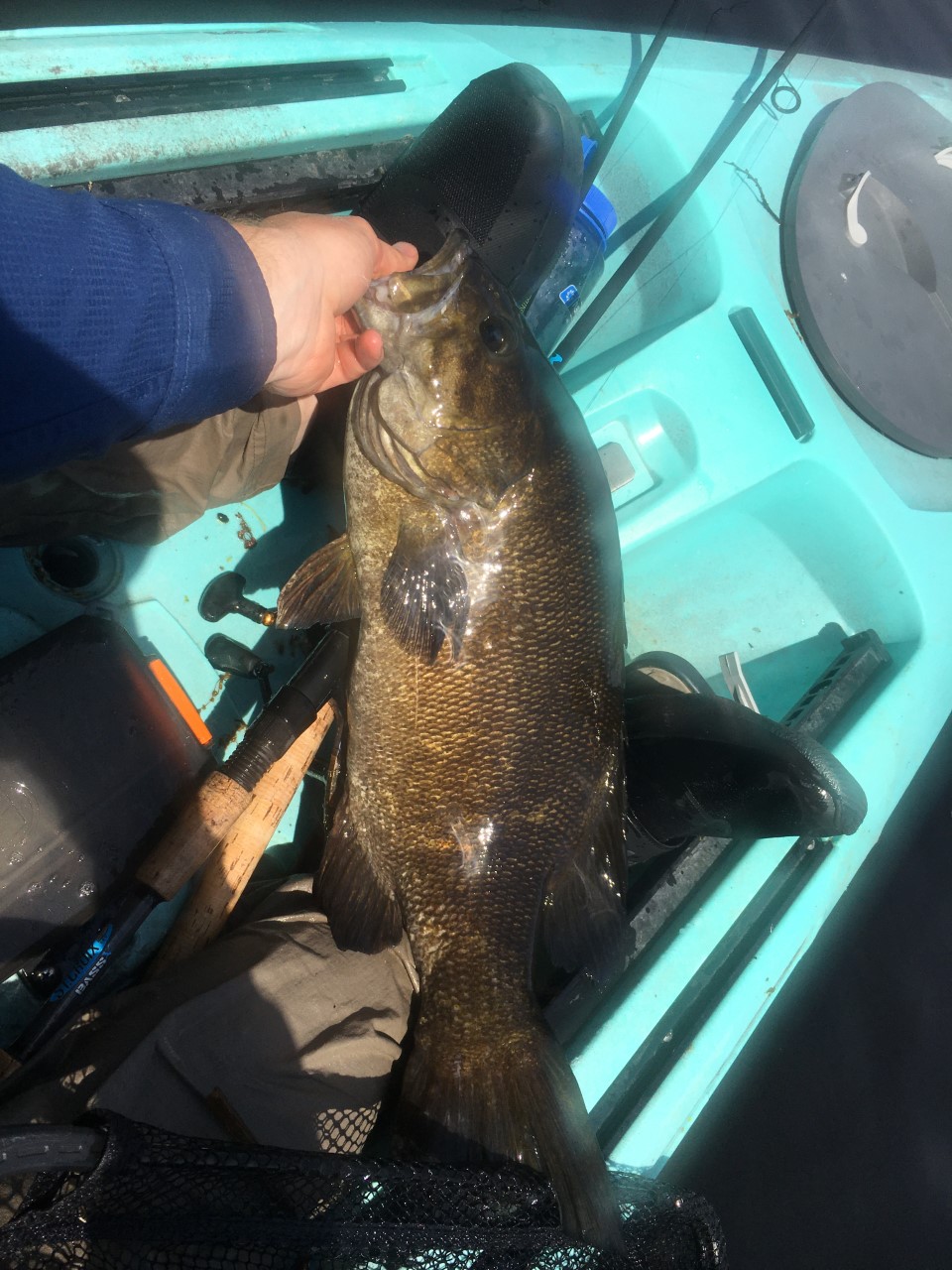