Memorial weekend on Meeds
by TuscaroraBorealis

Trip Type: Paddling Canoe
Entry Date: 05/28/2022
Entry Point: Meeds Lake (EP 48)
Exit Point: Lizz and Swamp Lakes (EP 47)
Number of Days: 3
Group Size: 2
Trip Introduction:
I would be closing on a house just a few days after this trip so, a short, simple basecamp type trip was all the more I felt we should do. I was looking forward to checking out a few of the smaller lakes just south of Meeds on a daytrip and, of course, spending quality time with Aurora.
Discuss Trip: View Discussion Thread (6 messages)
Day 1 of 3
SATURDAY MAY 28, 2022

It’s a smoky gray morning with heavy humid air as we pull into the western most public access to Poplar Lake. It’s not raining but, it looks like it wants to and, as to be expected for the Memorial Day weekend, rain is in the forecast throughout. So, before pushing off we suit up in our raingear. There is only a very slight breeze easing across the lake as we paddle southeast towards the finger bay that harbors the lengthy portage into Meeds Lake.

As we make the turn into the bay and head west, I spot an interesting ball shaped cluster atop one of the nearby shoreline black spruce trees. I only recently discovered (thanks to bwca.com member yardstickangler) that this is an occurrence of Eastern Dwarf Mistletoe and is fairly uncommon. 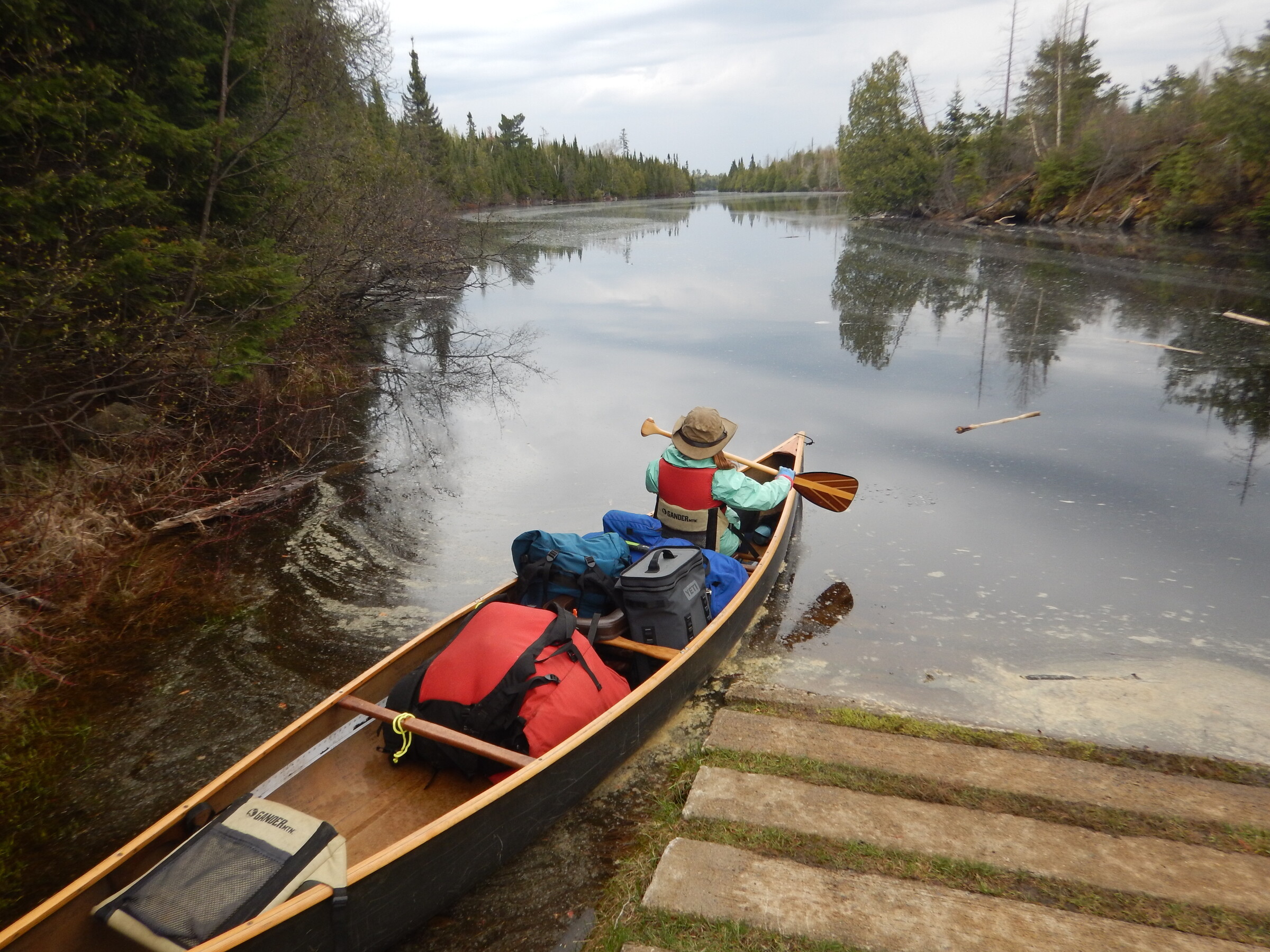 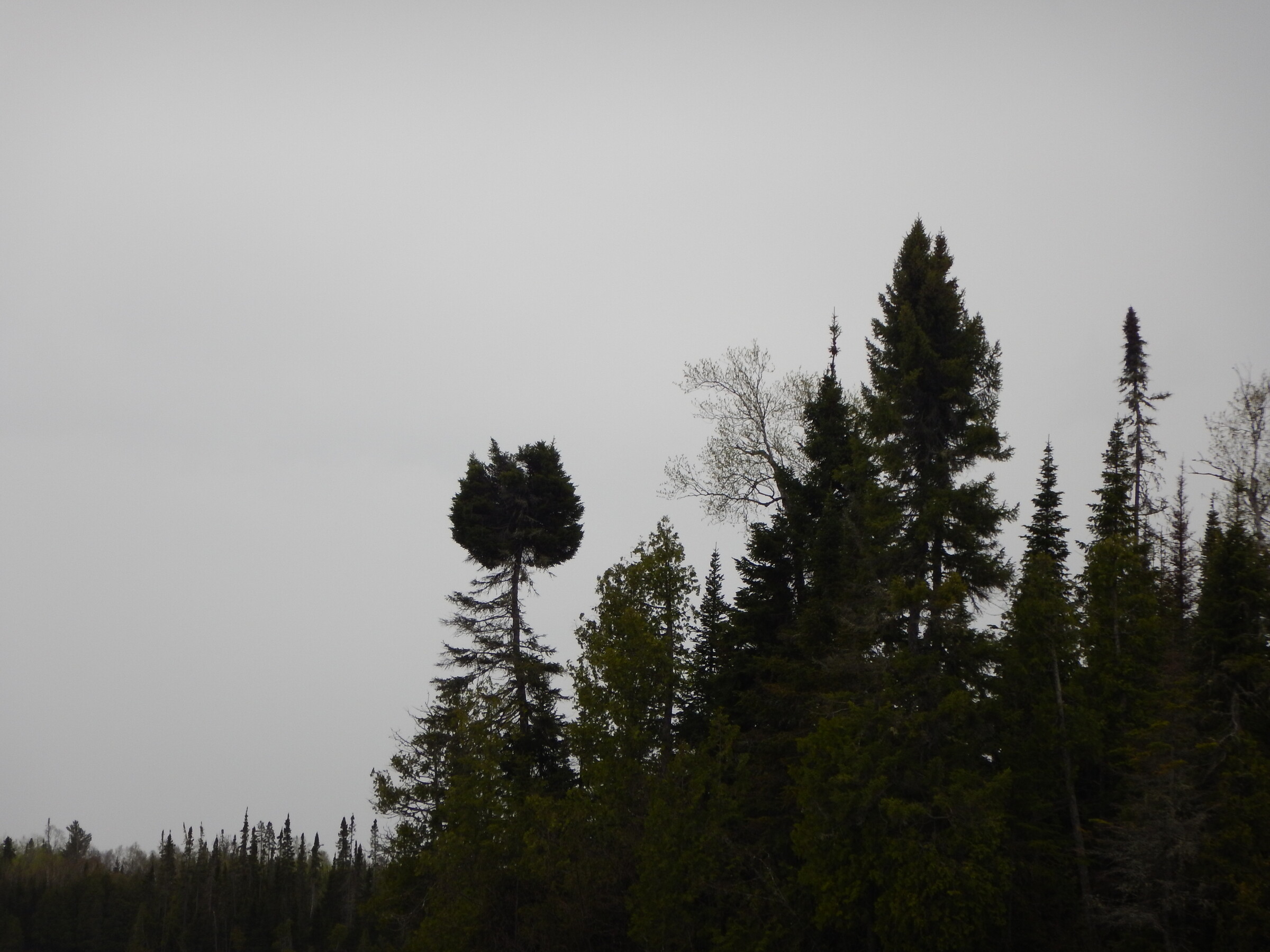 There is a natural looking, though faux, tree branch duck house up in a white pine inadvertently alerting us that this is the landing to Meeds Lake. No sooner do we pull up to the spacious landing, get unloaded, when the promised rain begins in earnest. Right off the bat there’s a decent hill to negotiate; it’s nothing severe but does get the blood pumping and proves to be the toughest of this trail. With all the recent flooding, and as wet as it has been lately, I’m surprised the trail isn’t more of a mud slick. Along the way we encounter another mentionable hill (uphill heading towards Poplar), several boardwalks, some nice upland cedars, plenty of moose sign, the Banadad ski/hiking trail, the official wilderness boundary and a boulder laden stretch Aurora christens “Rock City.” The landing on Meeds isn’t too impressive but, it is a welcome site and affords a picturesque unveiling of this scenic entry point lake which somewhat reminds me of Little Saganaga Lake. 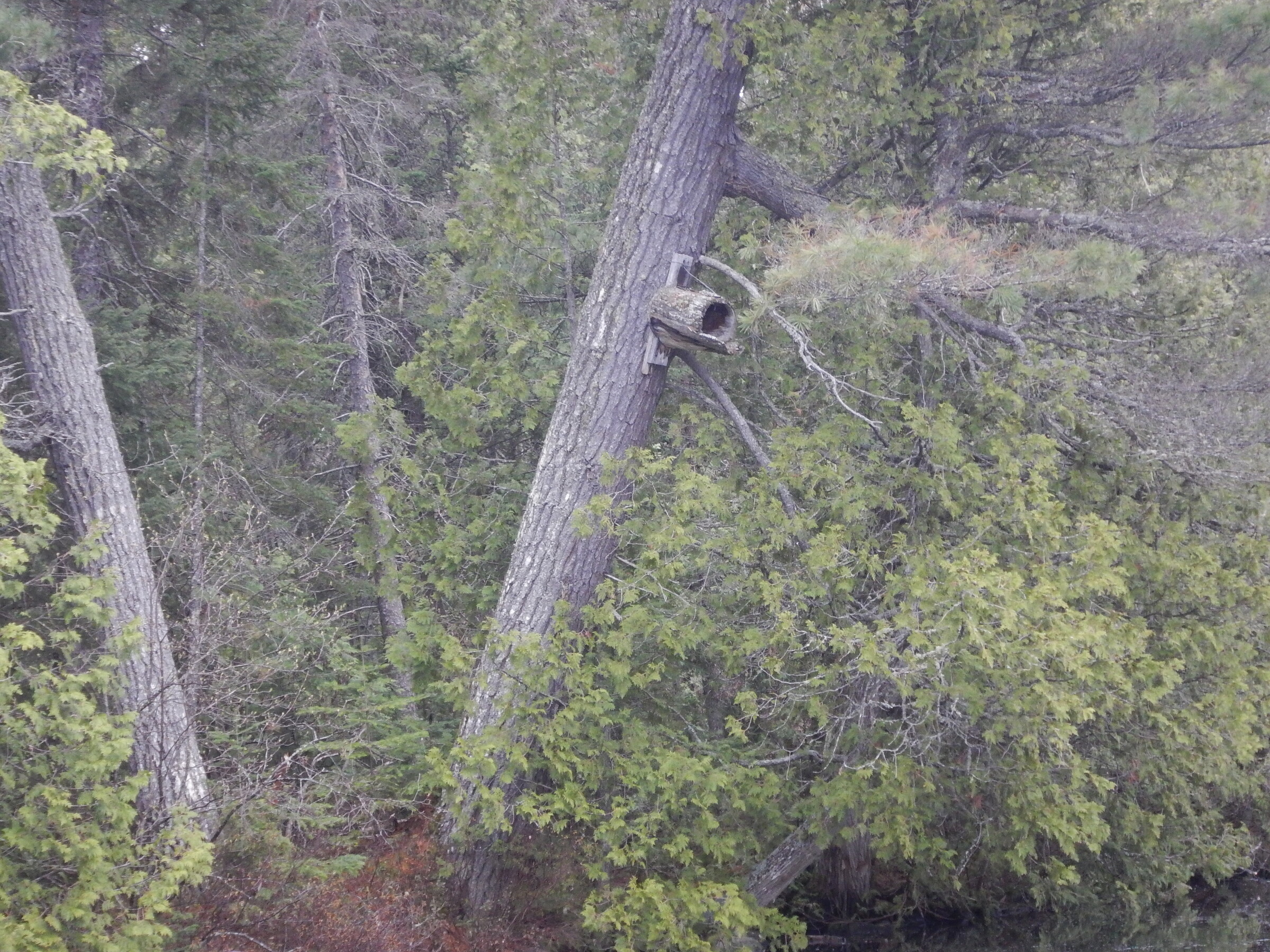 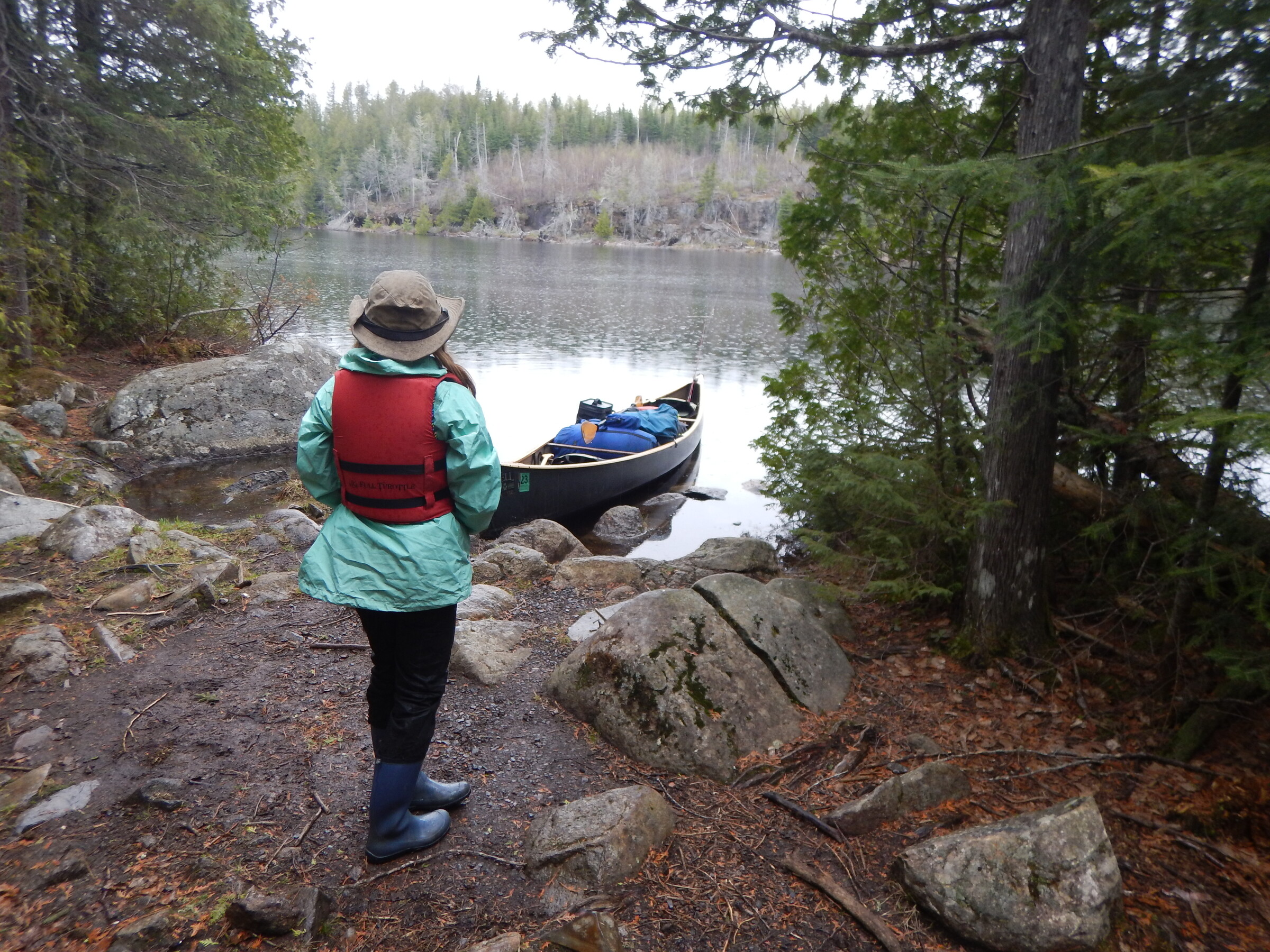 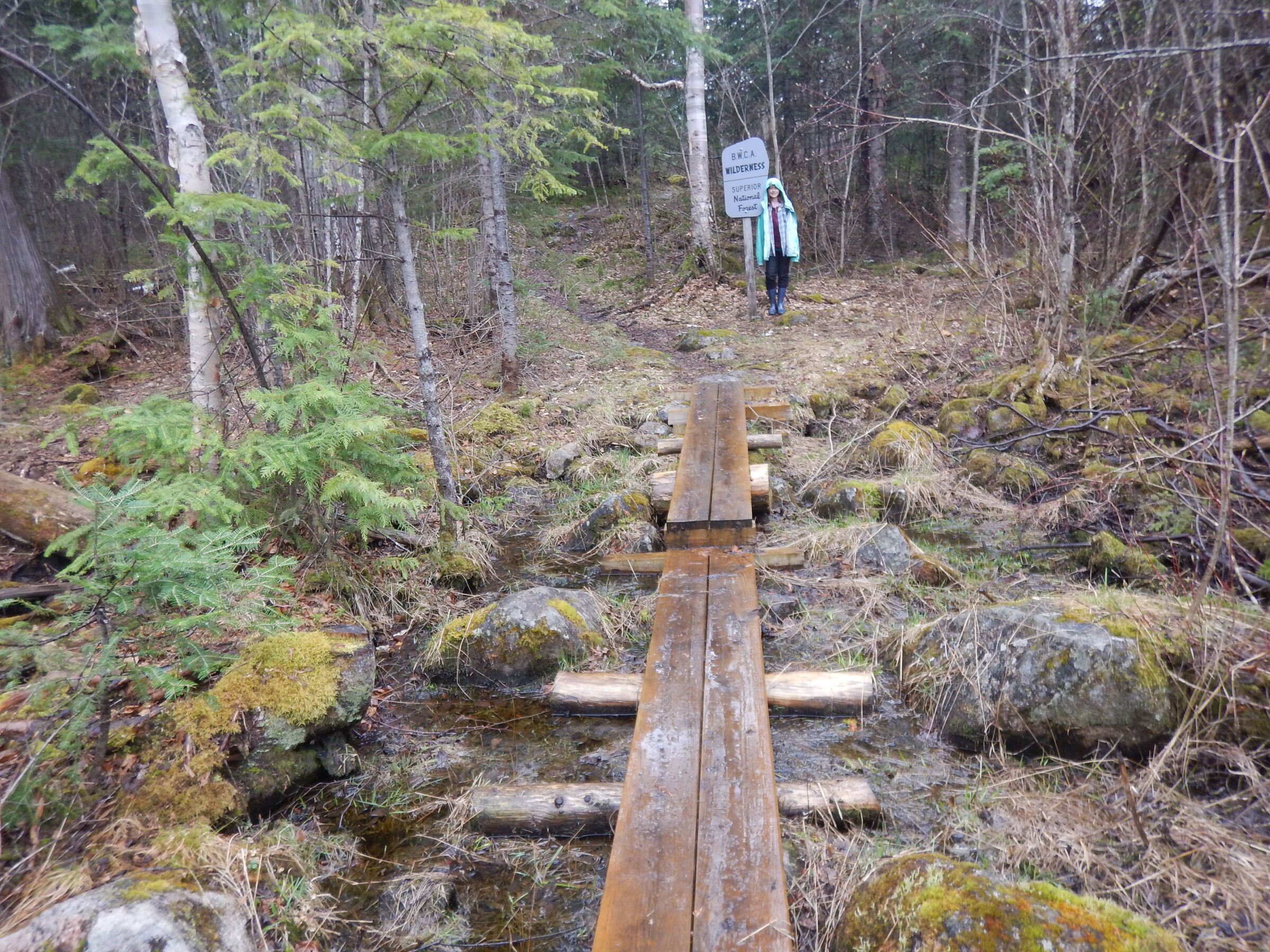 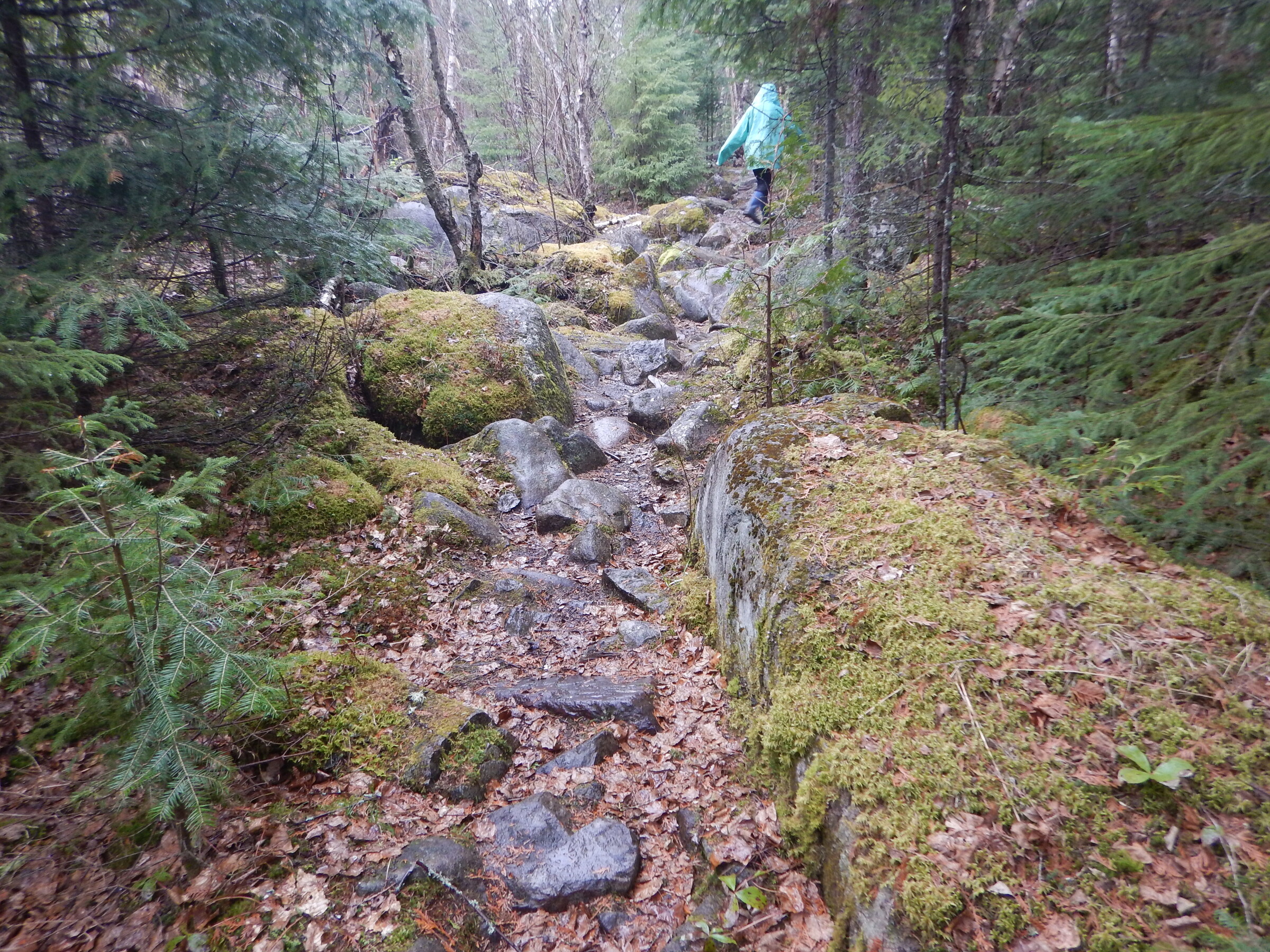 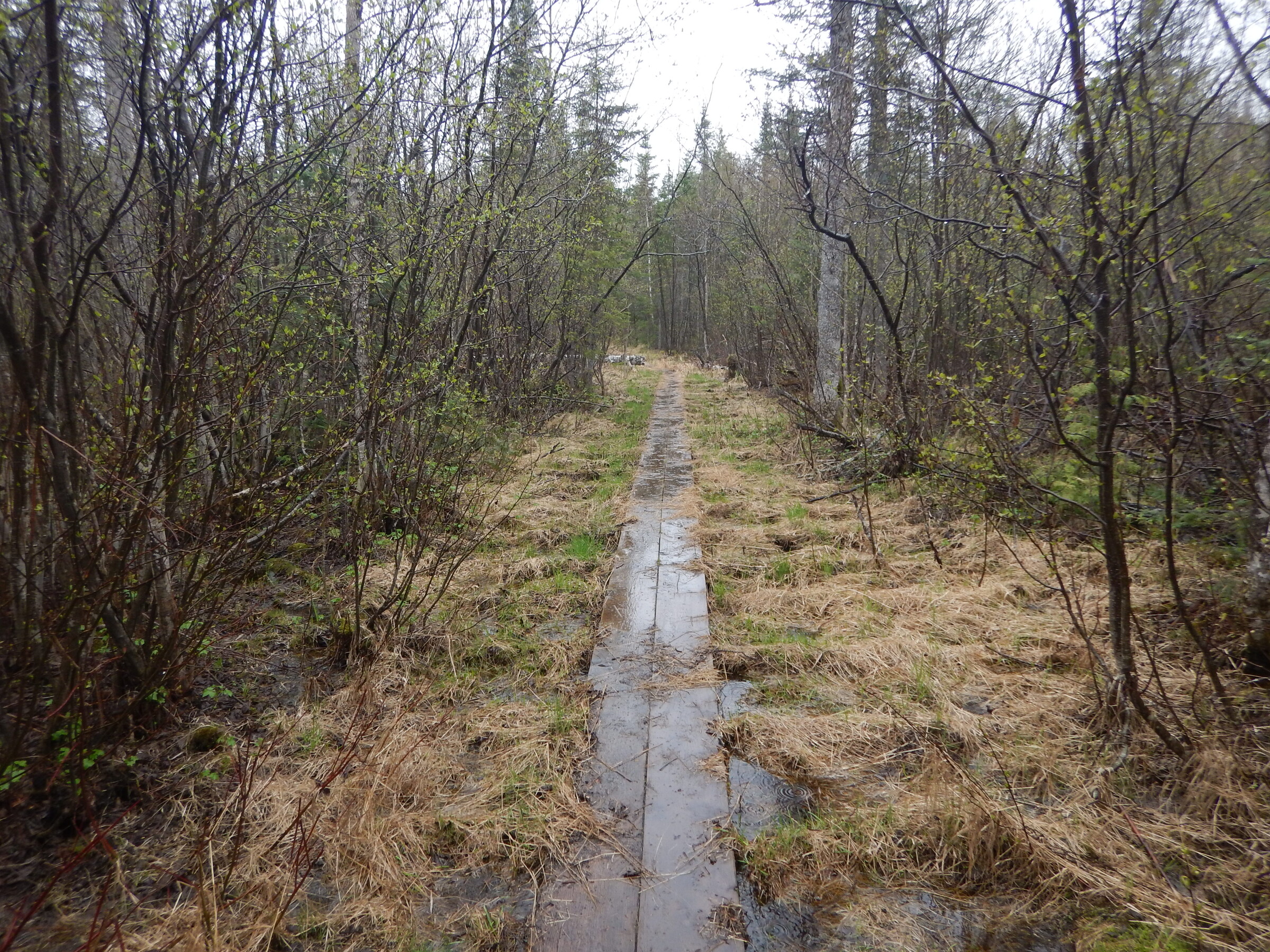 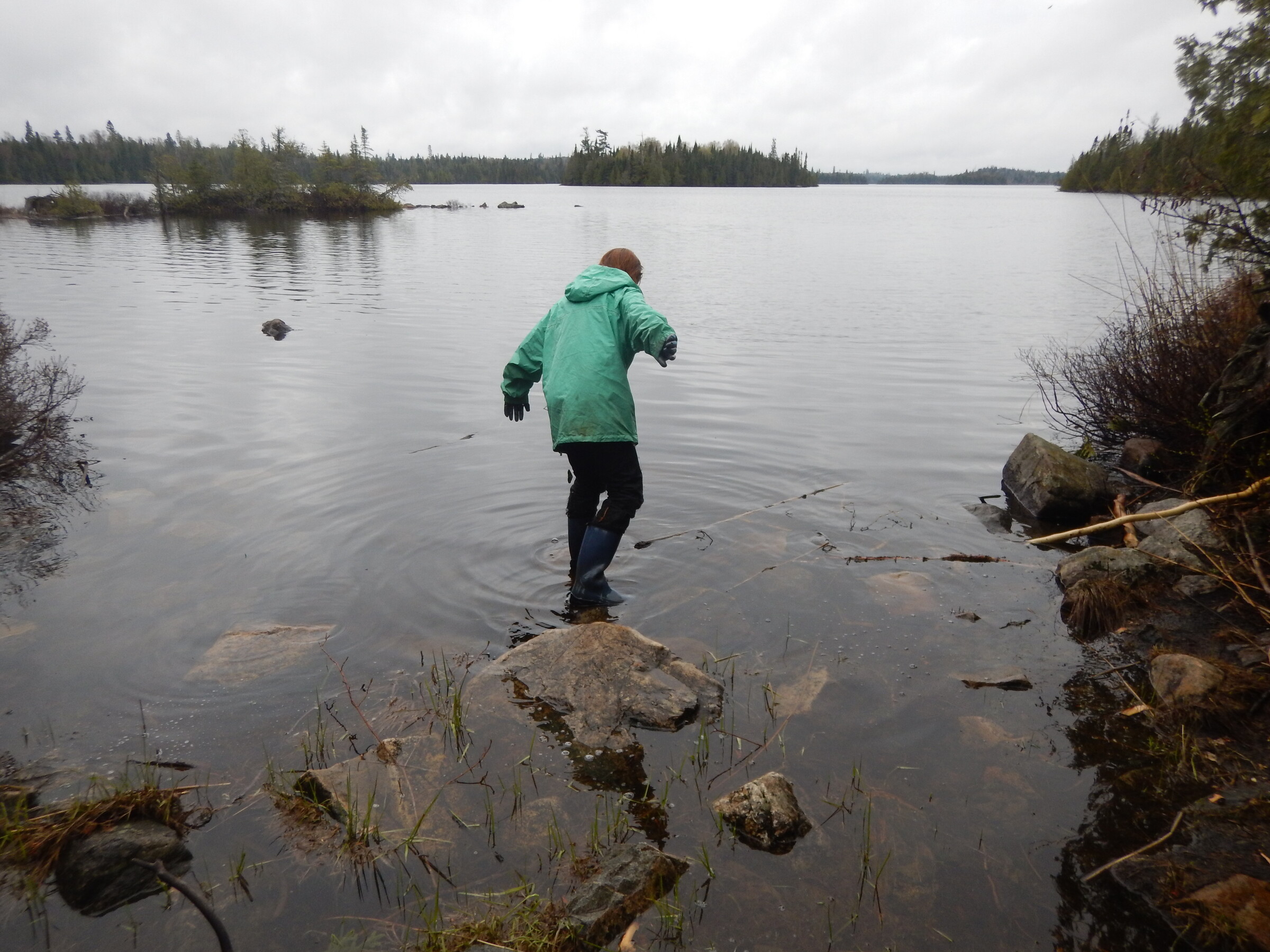 I’ve already sold Aurora on the fact that this should be our only portage of the day. I certainly want to avoid the busyness of Caribou Lake if at all possible because I don’t think I could now convince Aurora to do the 2 longer portages into Pillsbery Lake. However, Meeds not being a popular entry, the sparseness of vehicles in to parking lot and the fact that we encountered the other group, a couple who claimed they were headed for Winchell, while doing the portage leads me to believe we shouldn’t have a problem claiming a site on Meeds.

Paddling up along the south side of the first island, my worries are officially put to rest as it stops raining and, this site is vacant. It’s an above average site and Aurora quickly gives it her blessing. It’s kind of a tough scramble up to the site proper but, the tradeoff is an outstanding elevated view down the better percentage of the lake. There are plenty of decent tent pads but, most are a fair distance from the fire grate area and, one is at the bottom of a hill by the lake where it looks like water would pool up. As expected, firewood is tough to come by but, we do find some suitable trees for our tarp and hammock. Aurora tries some fishing while I get camp setup. 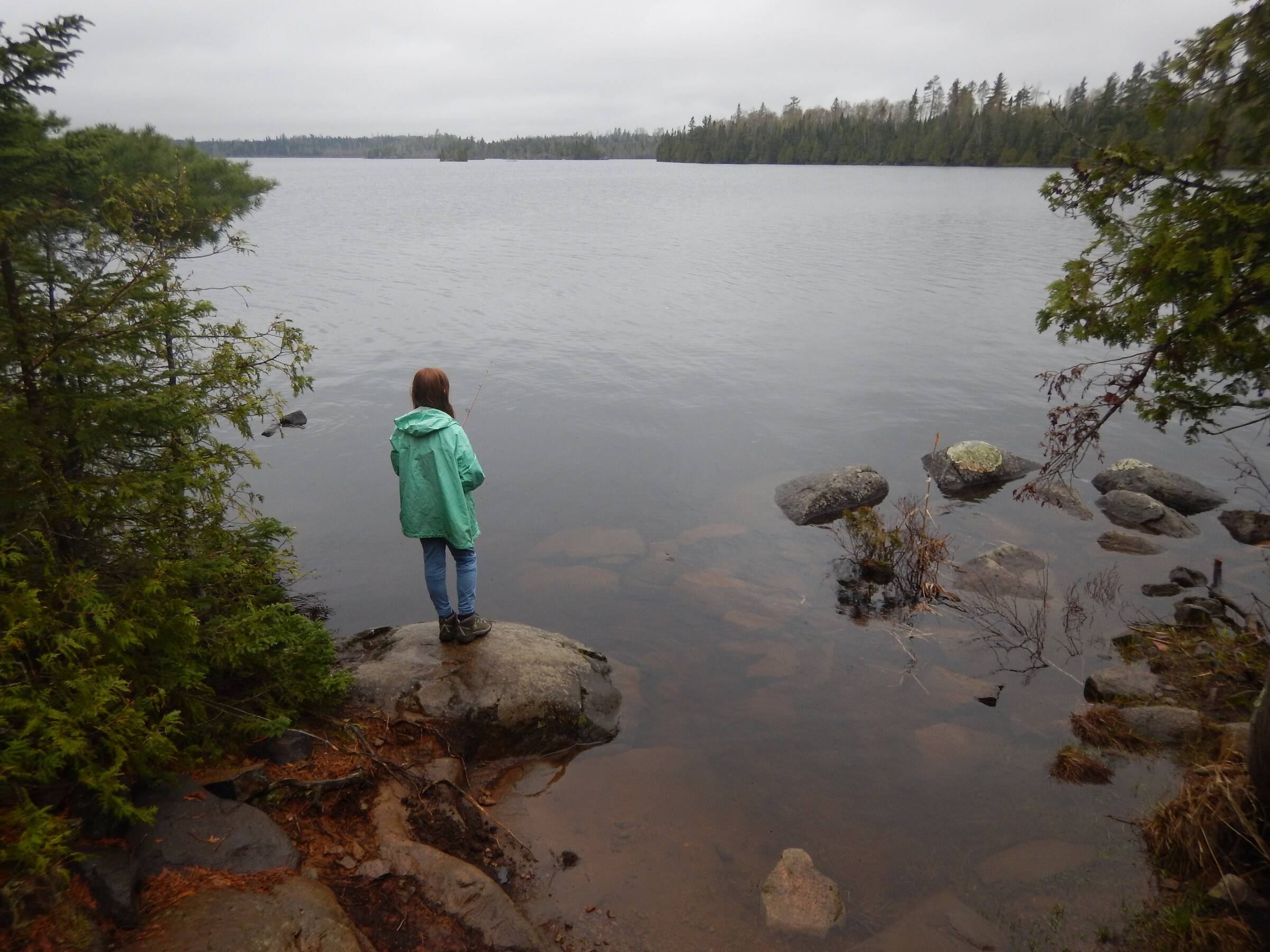 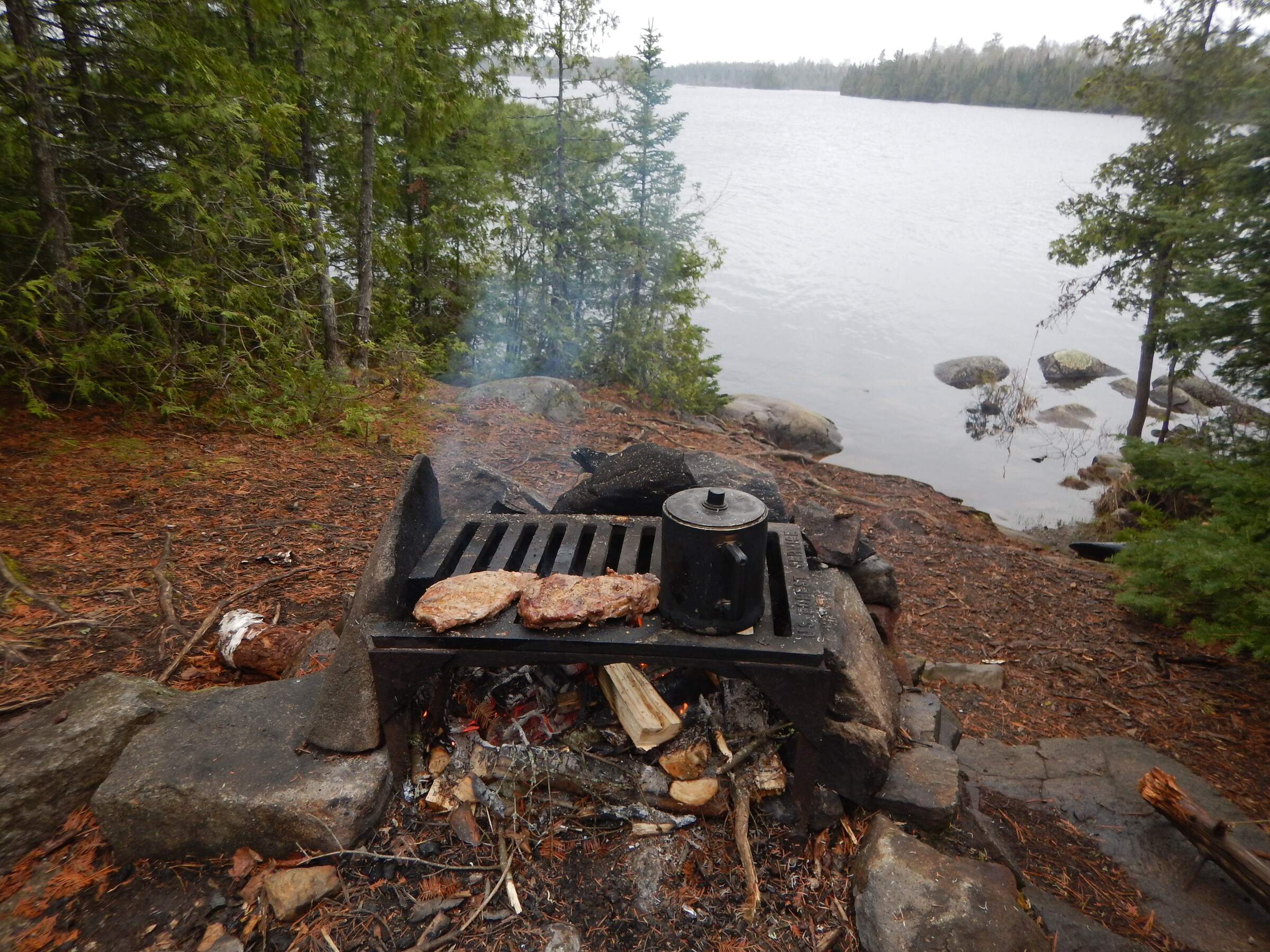 It’s ribeye's for supper with some scalloped potatoes tastefully complimented with some asiago “stinky” cheese. The rain stays away during the remainder of the daylight hours but, there is a fairly heavy feel to the air as the clouds do not break up this evening. It’s prayers and some cards (rummy) before we cash in our chips for the night.