Return of the Cousins Camping
by BonzSF

Trip Type: Paddling Canoe
Entry Date: 08/18/2022
Entry & Exit Point: Mudro Lake (EP 23)
Number of Days: 11
Group Size: 3
Trip Introduction:
The cousins return to BWCA to try a PMA. After we skipped a year for various reasons, we finally get back to do the trip we planned LAST year. When we got off the water last time in 2020 at least two of us vowed to make it an annual event. It was my first trip and his second I thought all four of us did but we'll see. As it was, three of us were the final tally. We have other cousins/siblings who have STRONGLY expressed interest but dropped out. Route was to be Mudro to Gull or Thunder night one then down the Beartrap to Sunday lake for a layover day. And on to Iron, Crooked, and back up the Horse River. 10 days on the water and plenty of time to fish.... or not. 47 miles of paddling and about 18 miles of portage walking. 2.5 portaging with 1 or 2 doing the third trip. Two Canoes. Wenonah Basswood 17 and a Prism solo. 8 Packs plus my small backpack with To Go kit.
Discuss Trip: View Discussion Thread (3 messages)
Day 1 of 11
Thursday, August 18, 2022 Thursday, August 18, 2022 I actually left at 11:59 on the 17th, but that was when the airplane’s door closed. We weren’t off the ground in SFO until after midnight. True Red-Eye flight. I got the aisle seat and that was a mistake. I should have got the window so I could sleep against the wall. I reclined the seat the full 1 ½” available and was still to upright to sleep. I maybe got a total of an hour sleep in cat naps. Arrived at Chicago at 6:30 AM to meet my two cousins who were arriving around 7:30. Count so far, 1 hour of sleep in the last 24 hours. But I’m fine!!! Really . Adrenaline is a wonderful thing. And coffee. Met with Martin and Stephen then grabbed a quick breakfast. I thought they had brought a snowboard but it was a paddle bag. Newbie mistake . This is only my second trip in a canoe and I thought the outfitter provided paddle was sufficient. These paddles were more like artwork. Flew to Duluth and arrived at around 11. I sat next to a guy on the plane who knew many of Thursday night bicycle ride crew from the '80s. He was stationed in SF at the time. It started when I mentioned an old friend, Gravey and he said “ you know Steve??” We spent the flight talking about mountain biking in the 80s 90s on Mt Tam where we like to think it all started. And his time there and now his craft/business. Seems he makes handsaw according to old designs. He copies old handles and fabricates new saws the same way. He also restores them. I think it's pretty cool, old tools that had the design of things figured out are worth saving. We arrive in Duluth and pick up the rental car by 11. Ely by 1 under cloudy skies and go right to the outfitter. He had our permit but we needed to go pick up the PMA permit for Sunday Lake. So we drop our gear and head to the ranger station. Then to the boathouse for beer and lunch. That's when the "showers" start. Yeah more on "showers" later. We stock up on booze and supplies and head back for out trip orientation. The showers returned with some really good thunder and lighting. We clarified that we want two vessels, not a three person canoe. Which would have been interesting with the EIGHT packs on gear we had (that didn't include my GO backpack with the essentials and water).The outfitter asked the important question, Kayak or canoe paddle? I'm the newbie and still learning the intricacies' of canoe paddling. The J-stroke is still just a far out concept to me. So I called for a double blade. Steve and Martin had brought their own paddles so they were okay This time my lack of sleep in the last 38 hours overtakes my gangplank fever and I fall asleep at a reasonable hour. I did go through my gear and made sure I had enough fishing tackle 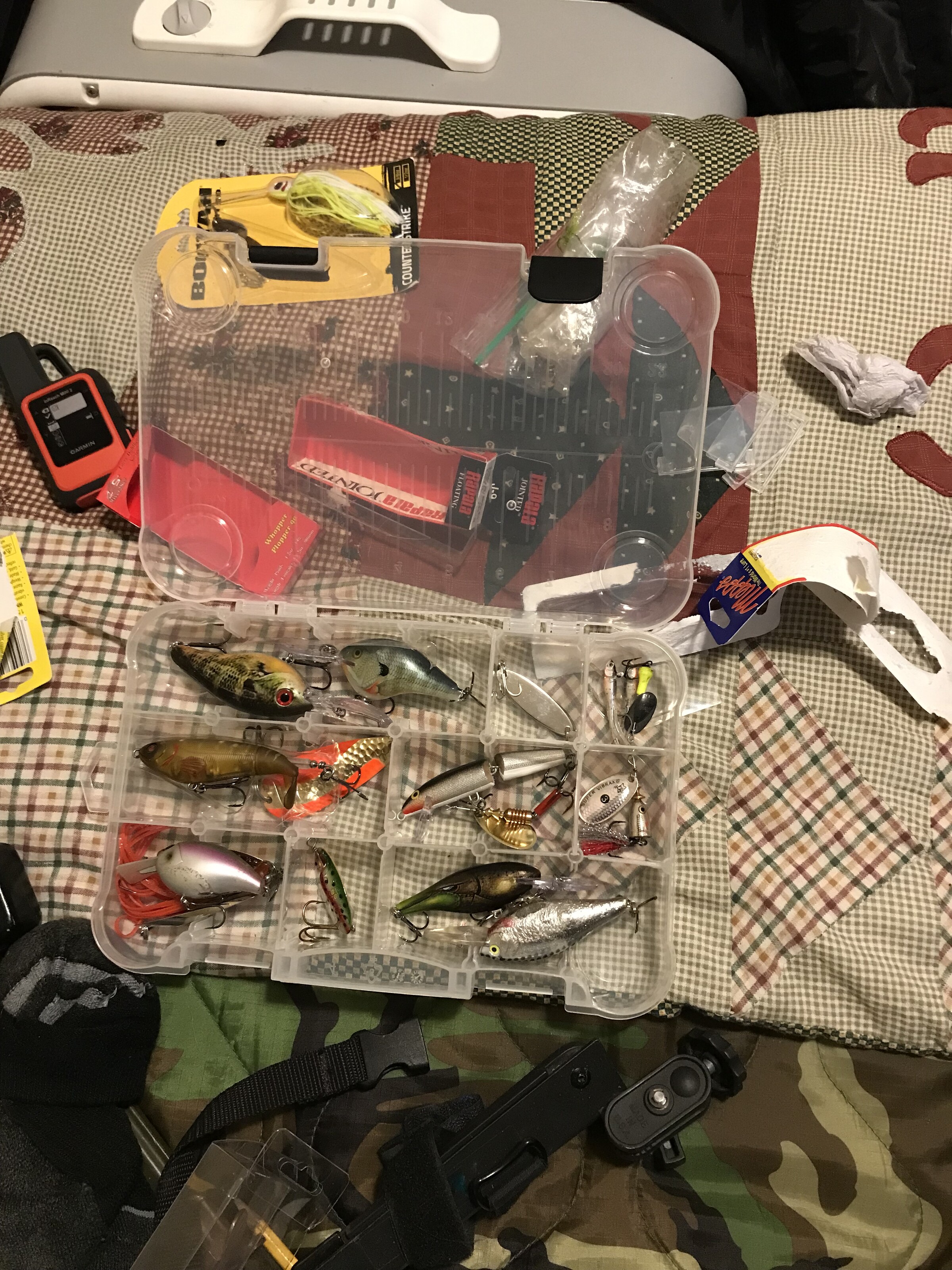 I think I've got enough. No sunset due to overcast skies. 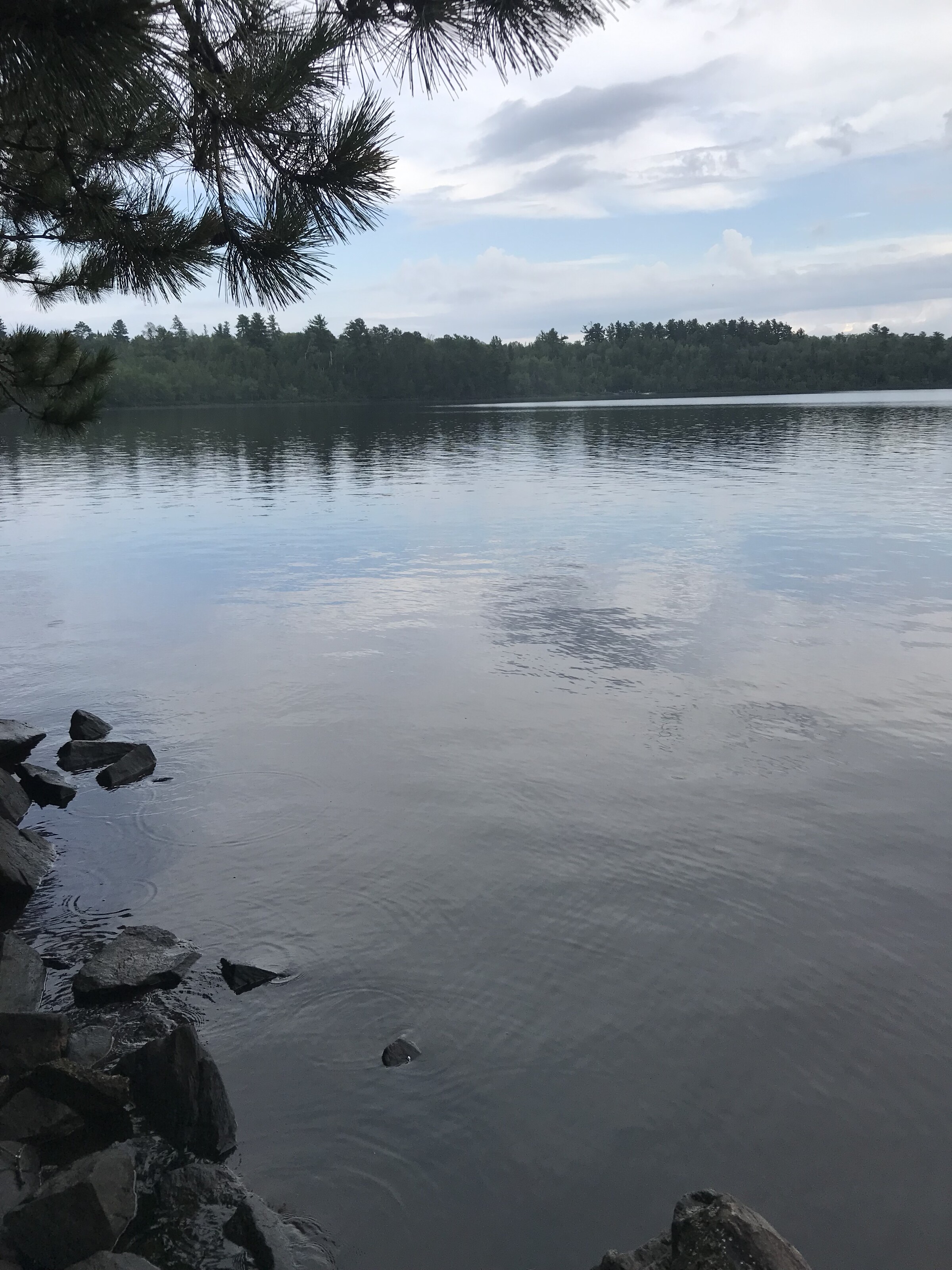