Trip Type: Paddling Canoe
Entry Date: 08/30/2022
Entry & Exit Point: Quetico
Number of Days: 4
Group Size: 1
Trip Introduction:
A couple years ago while sitting in my garage babysitting a brisket on the smoker I went down the YouTube rabbit hole and came across a video about backcountry canoeing and fishing in Ontario. Two years later I was setting out on a solo trip into Quetico.
Discuss Trip: View Discussion Thread (5 messages)
Report
During a long day keeping an eye on a brisket cooking low and slow on my smoker, I accidentally came across the Lost Lakes YouTube channel (aka Backcountry Angling Ontario). I thoroughly enjoyed the way Jon shot his videos and as a lifelong backpacker I also identified with his relatively minimalistic camping style. Within a couple months I had devoured pretty much all the canoeing videos the channel had to offer and it became pretty obvious a backcountry canoe trip was in my future.
Having spent many nights backpacking made the camping aspect easy. My dad had also taken me on many fishing trips to a small portage lake in southwest Ontario while growing up, so I was familiar with the boreal forest/Canadian shield environment. BUT, covid-19 and the fact I hadn’t canoed since I was a Boy Scout (I’m currently 47) presented some significant challenges.
Ultimately, I decided I was going to put in as much time paddling locally (Austin, TX) as possible and just figure out a way to scratch the itch. Between many early mornings solo in a rented P.O.S. plastic Old Towne on the lake running through downtown Austin and reading everything I could find about canoe tripping, I figured I was competent enough for a conservative trip.
Mostly thanks to this forum, I reached out to Doug with Canadian Quetico Outfitters (https://www.canadianqueticooutfitters.ca/). This was one of the best decisions I made. Doug was absolutely awesome. We emailed back and forth for a couple months. He did a great job answering my questions and provided a wealth of information. I have worked with outfitters of different varieties many times in the past and Doug was the best I have encountered. The gear wasn’t brand new and fancy, but everything served its intended purpose and worked beautifully. Most importantly, he listened, he shared his knowledge, and he didn’t try to fit me into a cookie-cutter trip.
Due to my inexperience, I opted for an out-and-back using the same access point to avoid pressure to put in a bunch of miles in the event I was having any struggles. I also opted for a short four night trip as a sort-of “test drive” since it was also going to be my first multiday backcountry solo.
I put in at Nym with the intent of ultimately heading down to Jesse Lake for Walleye fishing. Despite an early morning start, a stiff head wind picked up pretty quickly after I pushed off. Due to my inexperience, I wasn’t strategic enough about finding the most sheltered route possible. I got to a point where it was definitely beyond my (safe) limits to keep fighting the wind and found a reasonable spot to just wait it out. The white caps kept rolling throughout the day and by mid-afternoon it became obvious I was at my home for the night. It was definitely not a 5-star site and the water access sucked, but it was also minimally used with no annoying remnants of habitation by more slovenly campers.
The next morning I was on the water before 7 am and thoroughly enjoyed paddling without rolling waves! As I headed through the narrows on Batchewaung Lake, a couple beautiful smallies found the end of my line. I ran across a nice elevated site on Batch. Not a very big site, but it had one perfect tent pad and that was enough for me. Within 10 minutes fishing from shore, I caught three more smallmouth and was completely happy with my new temporary home. The next thirty six hours I day tripped and fished during the morning and evening hours. I pretty much did nothing but enjoy being in nature all afternoon. 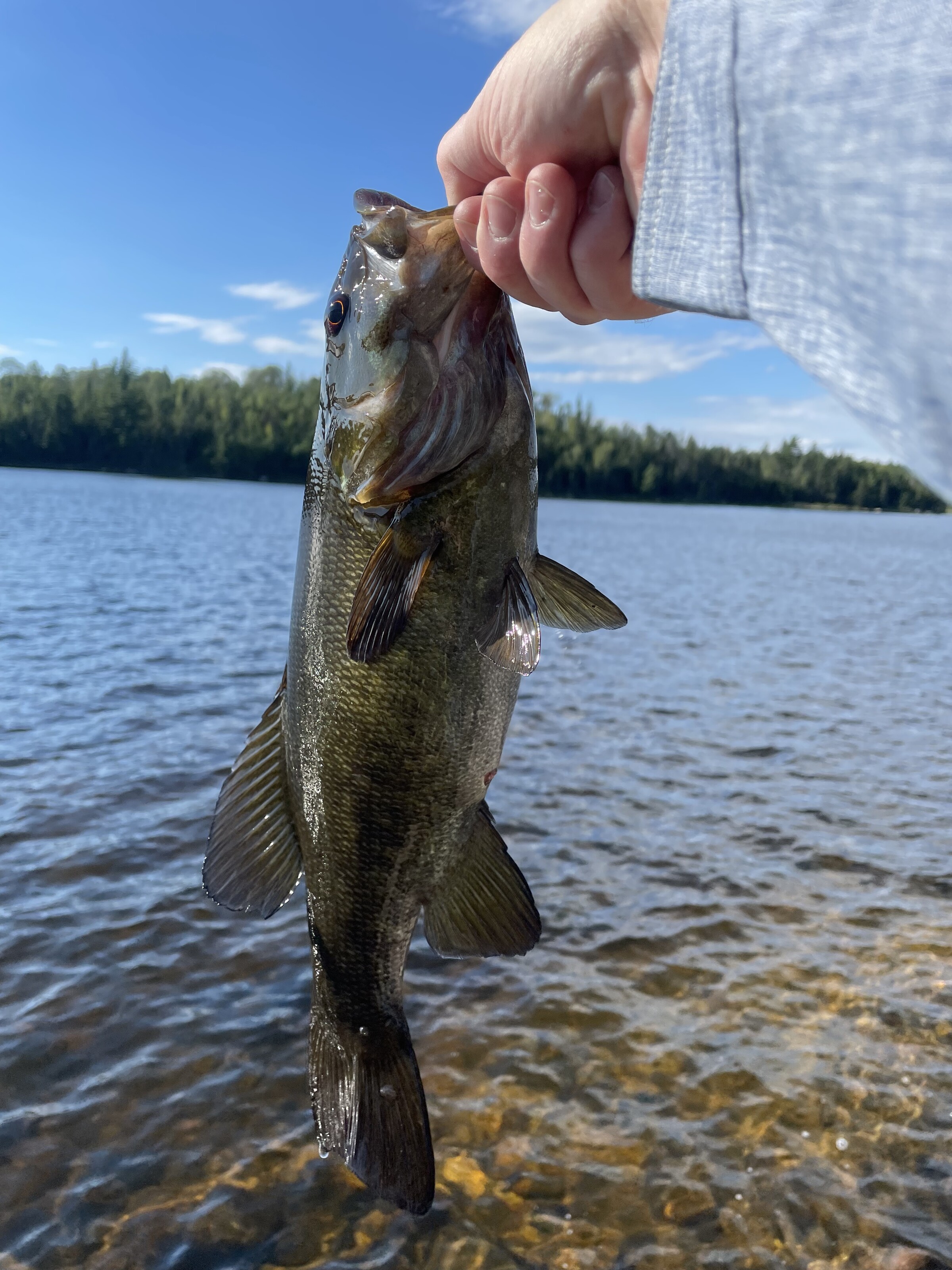 Between getting wind bound early my first day and a nasty forecast looming in 48 hours, I decided not to venture further afield to Jesse. I stuck with camping and fishing on Batch and giving myself an easier path home if the high winds rolled through as forecasted towards the end of my trip. I was bummed to not get into the reportedly excellent walleye fishing on Jesse, but I was definitely still learning to deal with the wind (and the learning curve was steep at times). The quality bass fishing on Batch and the beautiful evenings really minimized the disappointment. 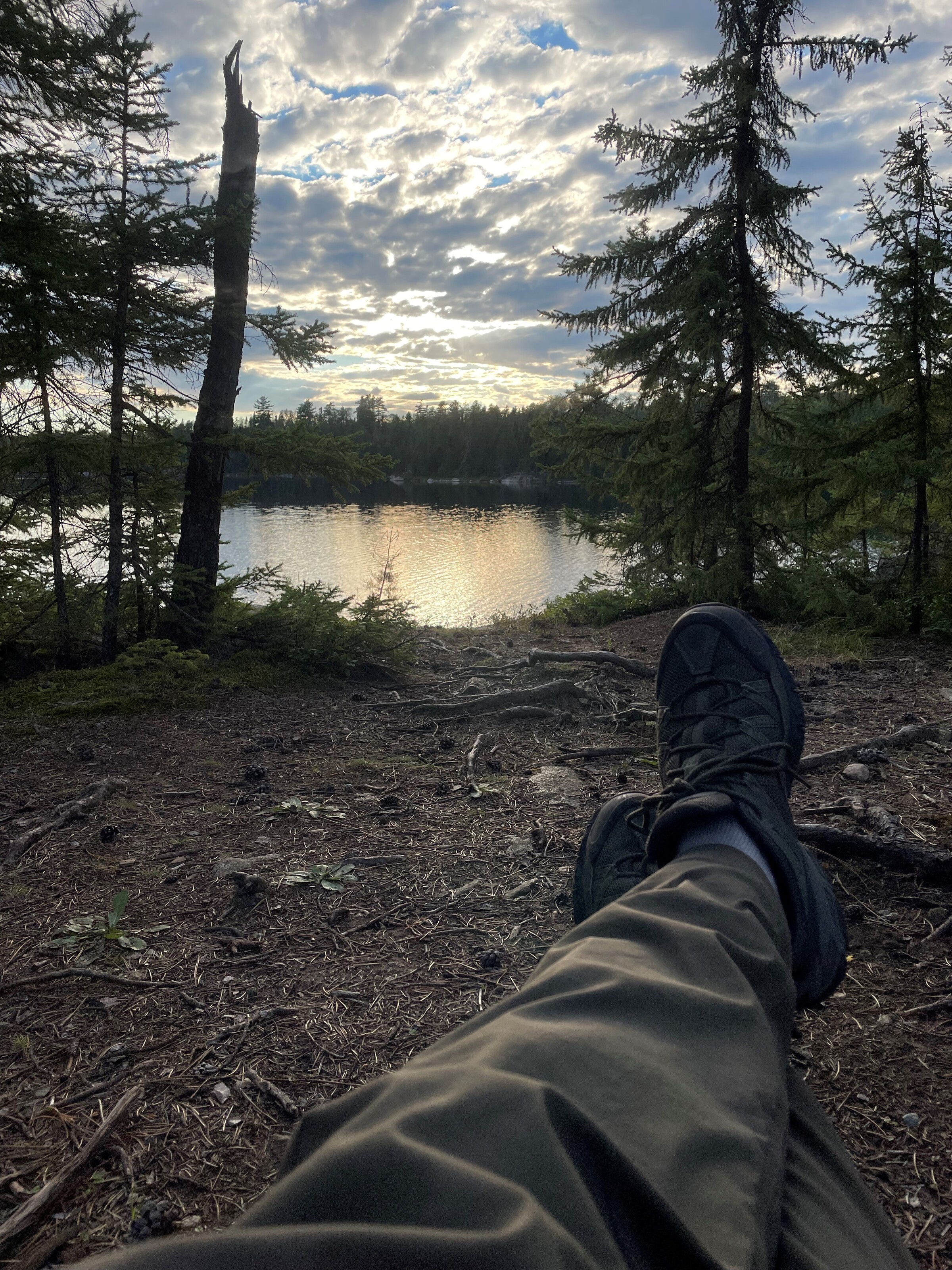 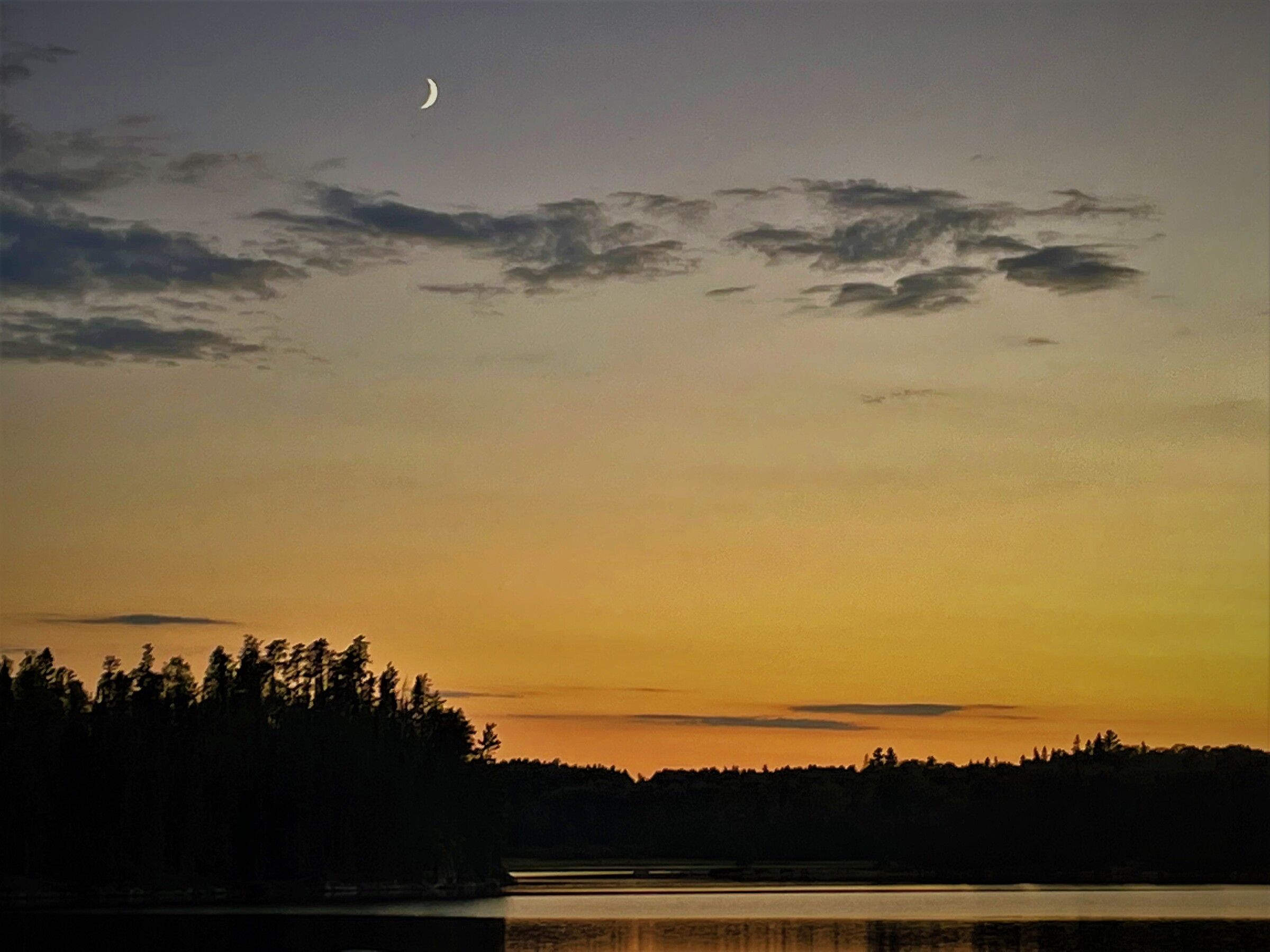 I spent two nights at the same elevated site. My fourth day I broke camp and set out early to head back towards a site at the east end of the narrow section of Batch that I had scouted on my way in. My target site was occupied, so I decided to head across the main part of Batchewaung to one of the sites south of the Batch-Nym portage. As I started across, there was minimal wind and just a mild ripple on the water out in the middle of the lake. By the time I was a third the way across, the wind picked up and I had a nice tail wind with only mild chop. Just past half-way, it changed from chop to rollers going straight towards the portage. By the time I was two-thirds across, it became obvious that I should not turn south towards the campsite and get blasted broadside by the waves. I opted to just ride the waves straight in to the Nym portage and play it safe.
After a quick portage, I headed back to the Nym access point. This time I was a little savvier about my route relative to the wind than I was the first day. It sucked to miss out on my last night in the backcountry on an already short trip, but my main goals for the trip were to learn and not do anything stupid, so I think I checked both those boxes.
My takeaways for my first canoe trip, first Quetico trip, and first multi-night solo camping trip were all positive: 1) I still have a ton to learn about paddling solo and especially dealing with wind, but my improvement over the first 72 hours backcountry canoeing gave me enough confidence to keep at it. 2) Quetico fishing is awesome (and I barely got into the park). 3) I now truly enjoy camping solo. I was always a little phobic camping in the backcountry alone when I did a few solo overnight backpacking trips years ago. This is one area where being a little older definitely seems helpful. I don’t think I could have embraced four days alone until the last few years. Satellite communication and the ability to check in with the family is also a big plus.
Hopefully I can convince a buddy to head up to Quetico with me next summer and give the canoe a little more horsepower to push through the wind, but if not I will probably venture out solo again. If you see a redhead who’s canoe is spinning in circles with the wind next summer in Quetico… that’s probably me.
Thanks to Jon and Erin of the Lost Lakes YouTube channel for the inspiration and big thanks to Doug with Canadian Quetico Outfitters for the knowledge and support to make the dream come true. 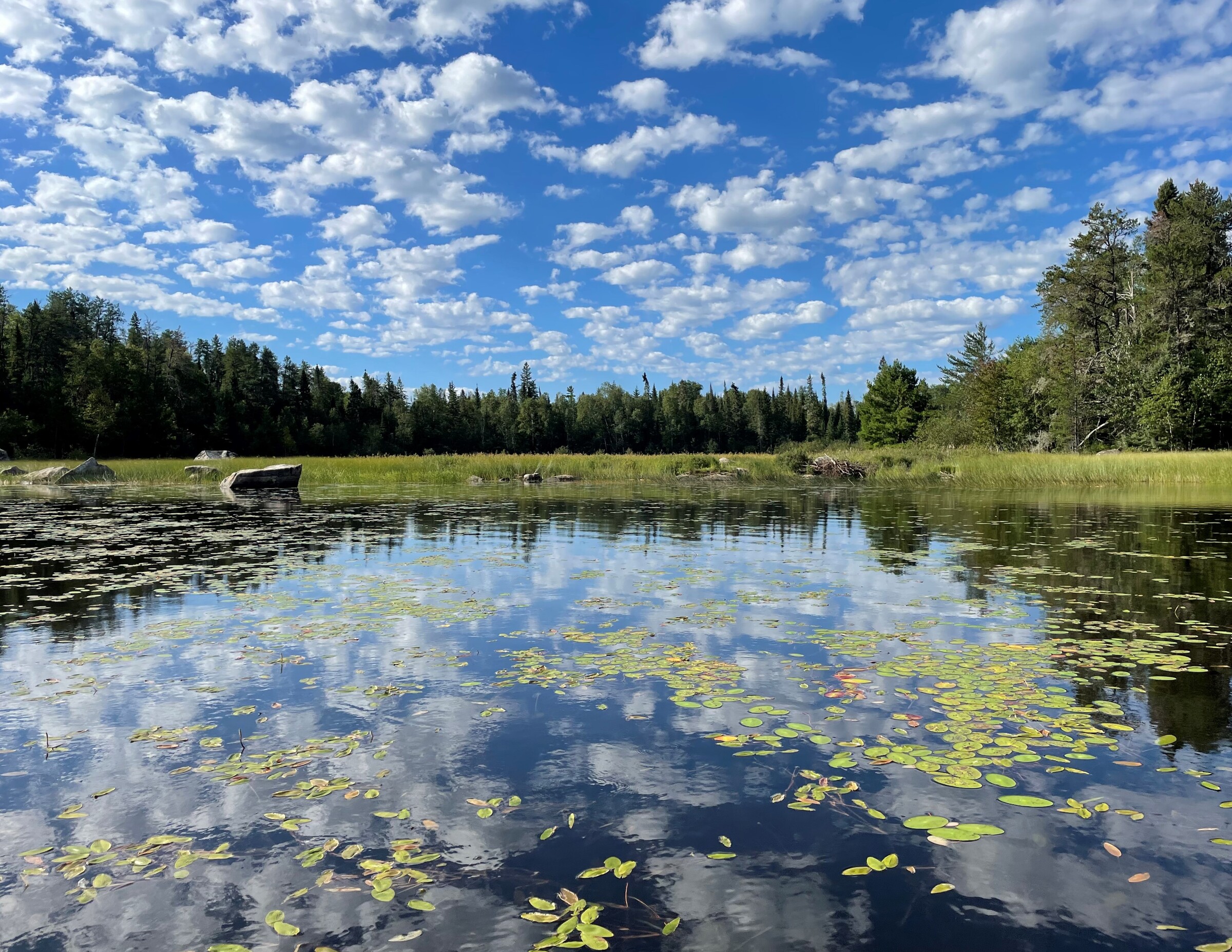