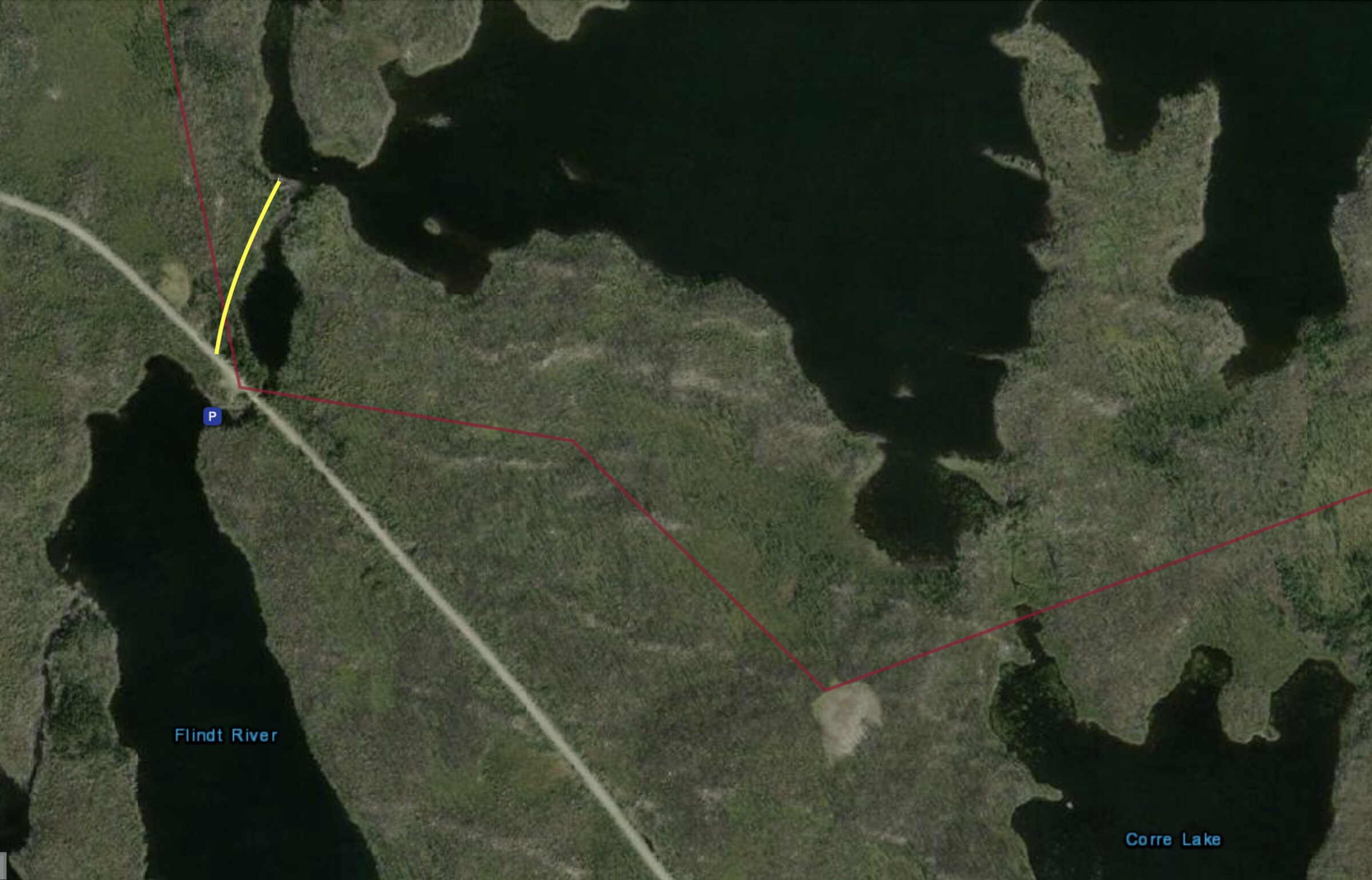 Portages- 65 total- 80-90% needed general maintenance but were easily passable by stepping over or walking around obstacles-10% needed major work (multiple down trees above knee level, some large trees at waist to chest level, blown in areas, some bushwhacking required.) In our opinion, the portage landings were the most challenging part of the travel with the need to load/unload in a combination of mud, slippery rocks, boulders and/or near moving water. In fact, there were so few "good landings" that we started to note those instead of the challenging ones.

Weather-Mixed, lots of head wind once we hit Wabakimi Lake and turned W/SW. Spent one day rained in and one day winded in with cloudless skies.

Saw canoeists on Granite (party of 10 paddling from Allenwater Bridge to Whitewater), Brennan (soloist), Windfall (party of two near the outpost), Flet Lake Portage (party of 2).

Overall a great, challenging trip. We loved the solitude, wildlife, and of course the walleye fishing- Planning next year's adventure.

•Miles 8.8 miles
•Portages-225M and the Railroad Tracks at Flindt Landing (125m?)
Ready for an adventure, we got up early at the Northwoods Motor Inn in Ignace, Ontario, grabbed a coffee and a bagel then headed northeast 130km toward Savant Lake. Turning on Vista Lake Road toward Rusty Myers seaplane base the entry point is near the second bridge after the airfield and before Corre Lake. Parking is limited with room for only a handful of vehicles but we found it deserted so it was easy to pull well off the road. There is a portage a few yards back from the parking area on the north side of the road which allows you to avoid the first rapids. 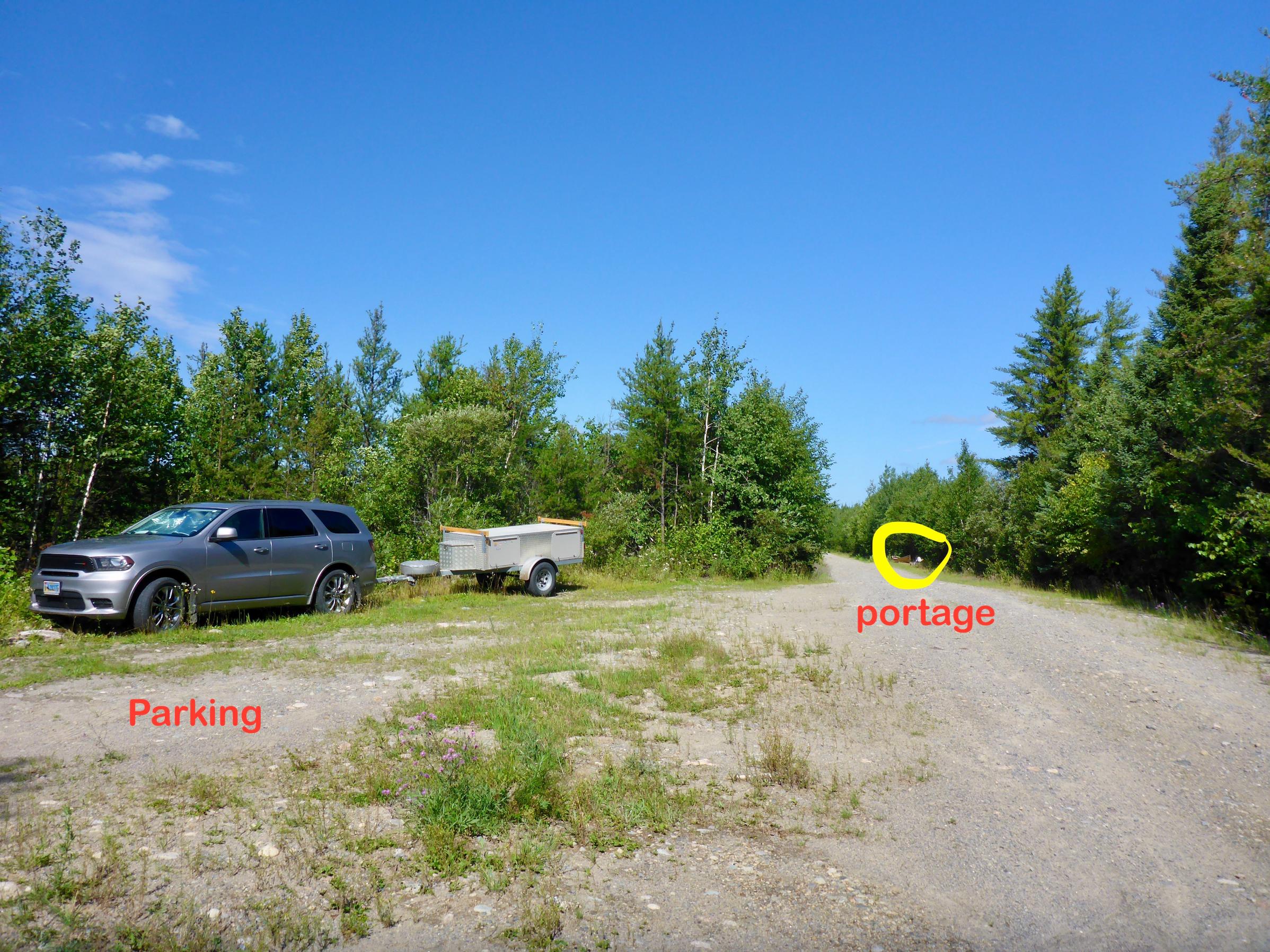 It’s a pleasant path, slightly downhill, through the blueberries, step over a bear poop, avoid the grouse, and drop your gear near a stashed Lund aluminum fishing boat-about 225m. We enjoyed a lovely sunny morning in the 70’s as we got organized, portaged, lunched and then shoved off north at 1130am. 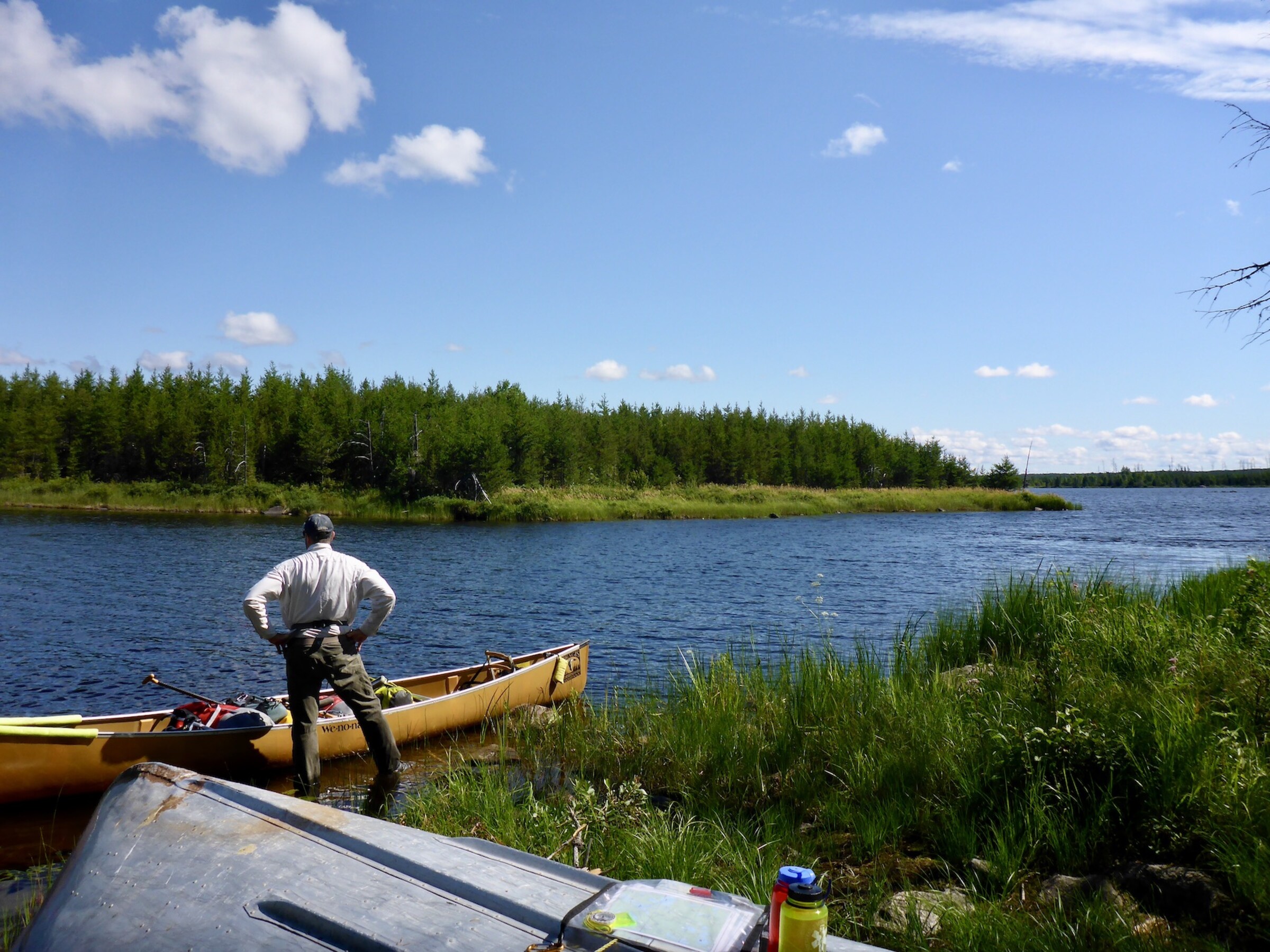 At 1135am we saw our first moose grazing along the shoreline. It wasn’t very concerned with us as we paddled quietly onward into a light wind. The lake soon narrowed into a grassy river paddle down the Flindt. 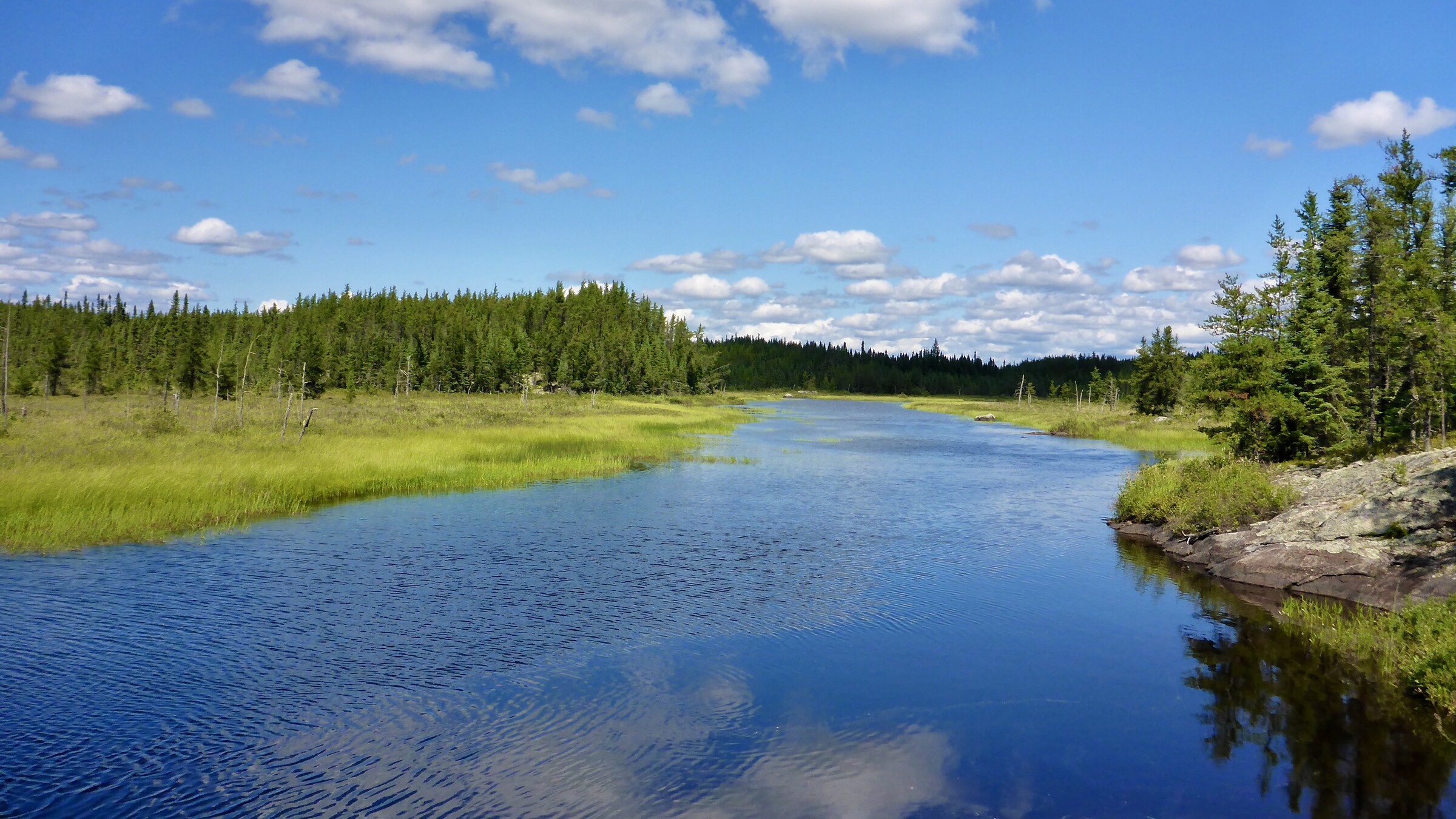 We lined two narrow rocky sections and navigated one log pullover but in the end it was a beautiful and smooth paddle with black ducks, mergansers, and eagles for company. The log pullover popped us into Heathcote Lake in time to see the passenger train heading west. Soon we arrived at the tracks and the Flindt Landing Resort. Not knowing exactly where to portage we chanced landing on their beach and inquired would it be ok to portage over the tracks using the stairs. A polite woman said, “sure” so after a couple of ups and downs we were on our way north on Heathcote Lake. 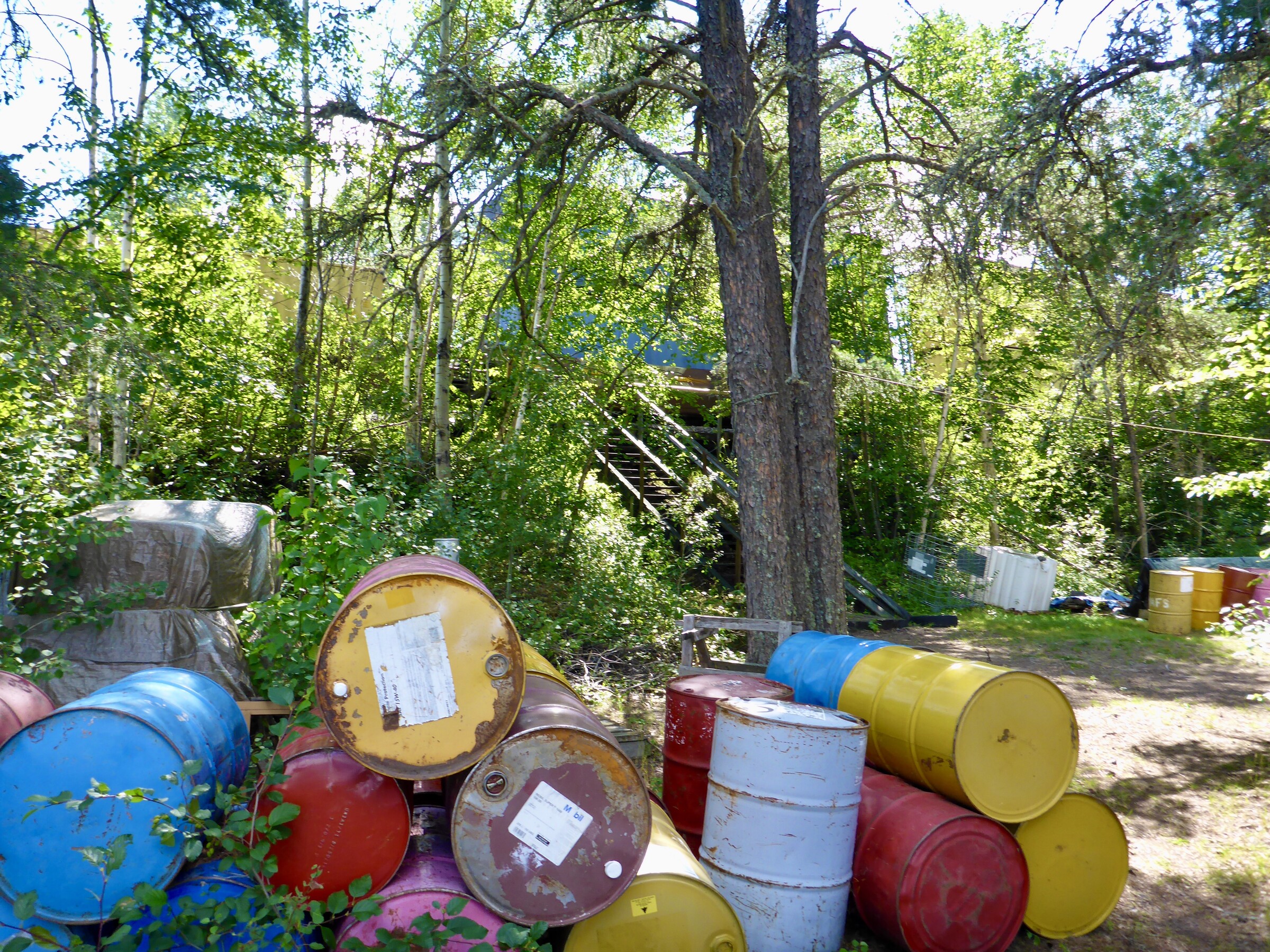 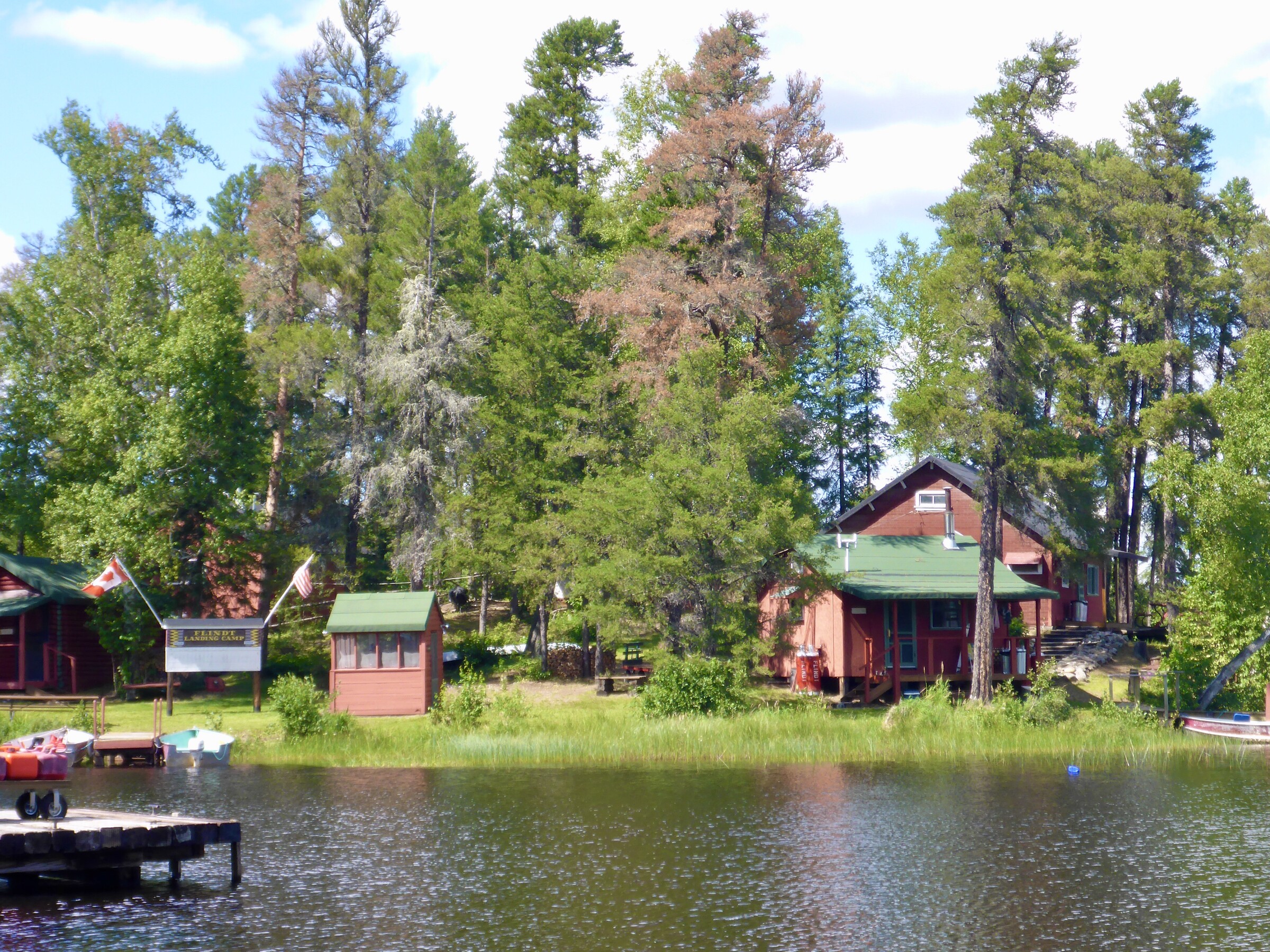 The fatigue of driving 1300 miles and the accumulated months of office work started to catch up with us around 300pm so we chose to camp on a marginal point in the pines. After a little clearing of down and dead trees we set our tent up on a small, sloped hole in the forest and lined the rods. Two pike and a few small walleye entertained us for a bit as evening approached. 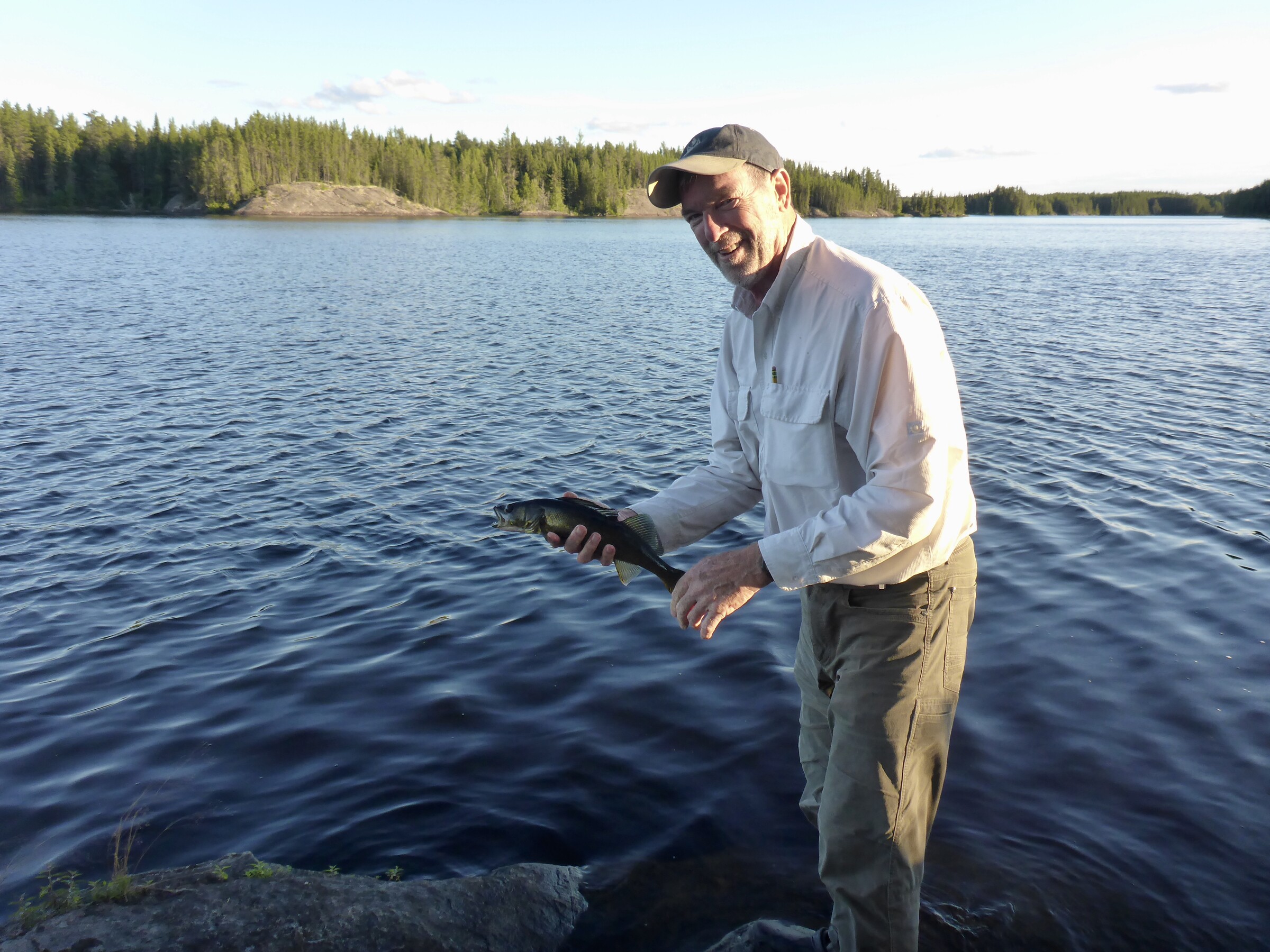 Heathcote Lake was rich with motorboats between 400pm and 730pm. Fisherfolk from Flindt Landing I guess but we saw about a ½ dozen or so scooting around. Ya, we gotta move north tomorrow. 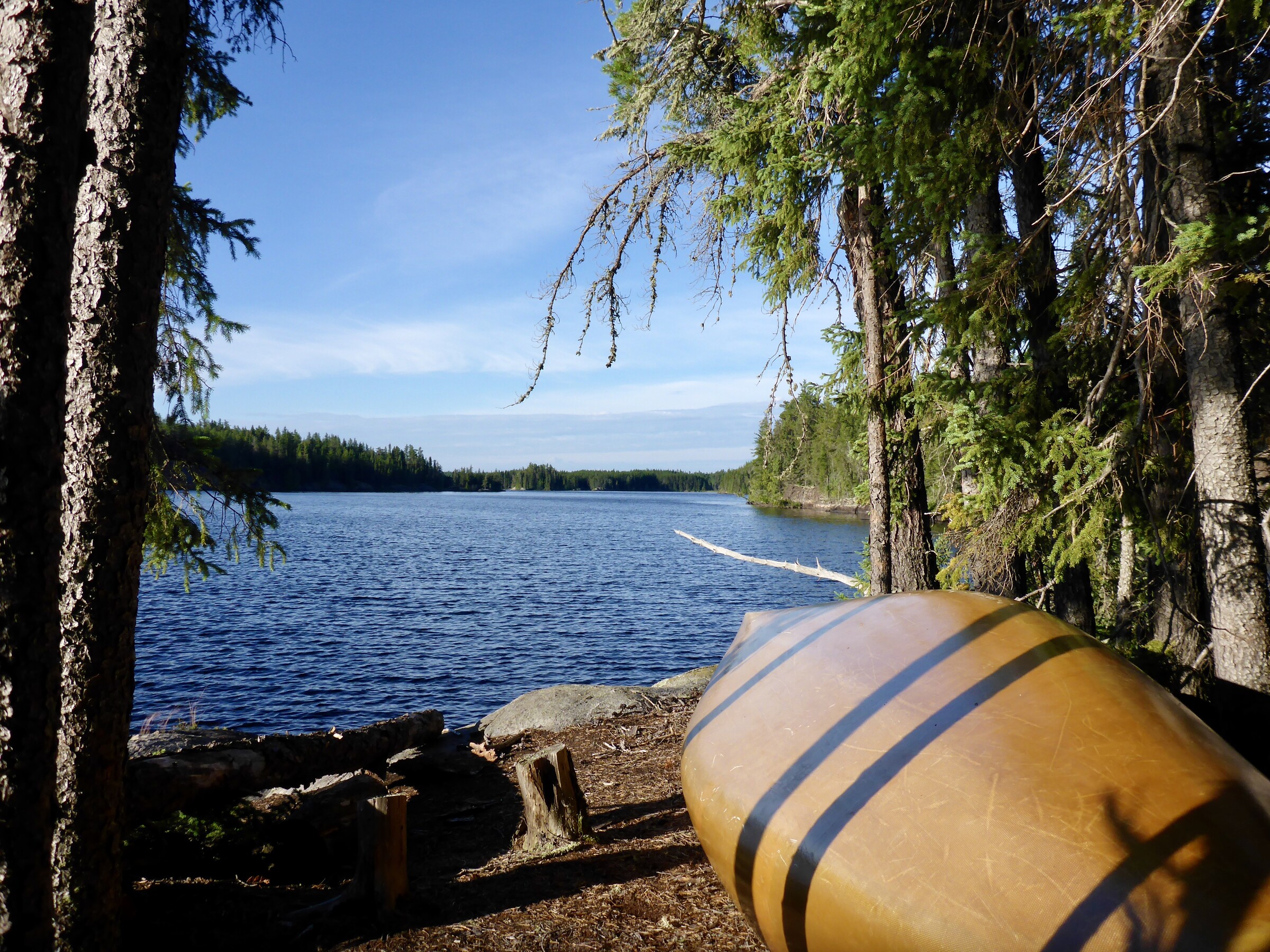 Around 700pm we chatted over a “Thanksgiving Dinner” of cornbread stuffing, chicken, gravy, and cranberries -relaxed and listened to the loons and allowed a few mosquitoes to quickly chase us to the tent. We stretched out listening to the generator at Flindt Landing but soon fell asleep (sliding downhill.) “We’re back!”

•9.26 Miles
•Portages 1)50m 2) 160m 3)36m
Trains passed in the night a couple of times and again at 530am. The morning dawned warm, sunny, with a slight breeze. We broke camp over hotdrinks and pan-fried bagels as the fisherfolk puttered about (4 boats). Soon we launched and headed down lake with the intent of crossing some portages and leaving motorboats behind. We paddled for about an hour before we were waylaid by a nice Ohio gent fishing a point. He was very interested in our journey, and we chatted for a few minutes before paddling on. Later we stopped at an unmarked island camp to have a stretch and a snack (blueberries) and then paddled into Heafer Lake just in time to see a cow Woodland Caribou on the north shore. (Hurray!) 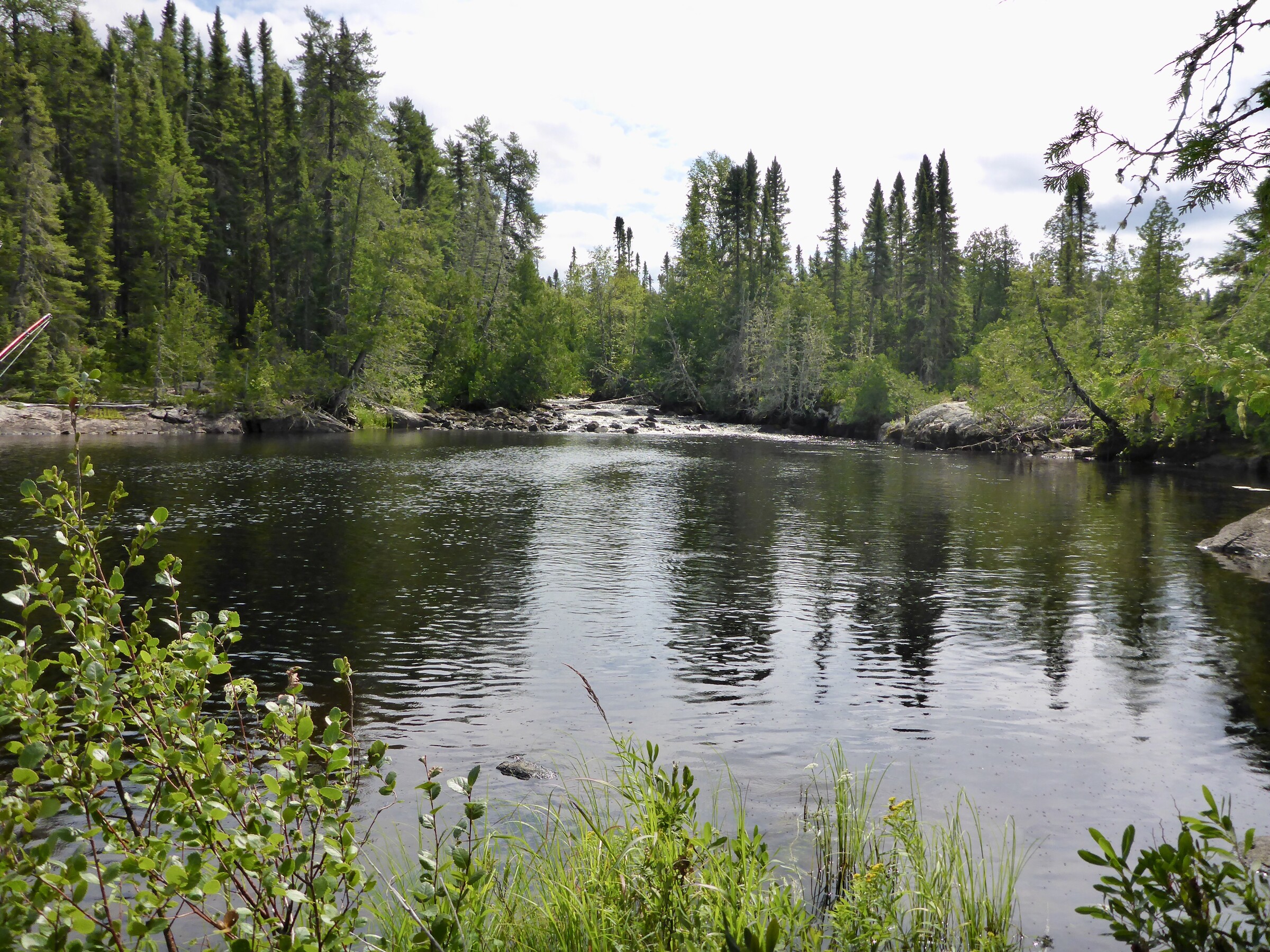 After that treat we moved into the narrows toward the first portage where we surprised two otters playing in the current. Waving goodbye to our last boat for the day we portaged (50m) through a small campsite and into the Flindt River. There were a couple of trees down (step-overs) but otherwise it was easy going. 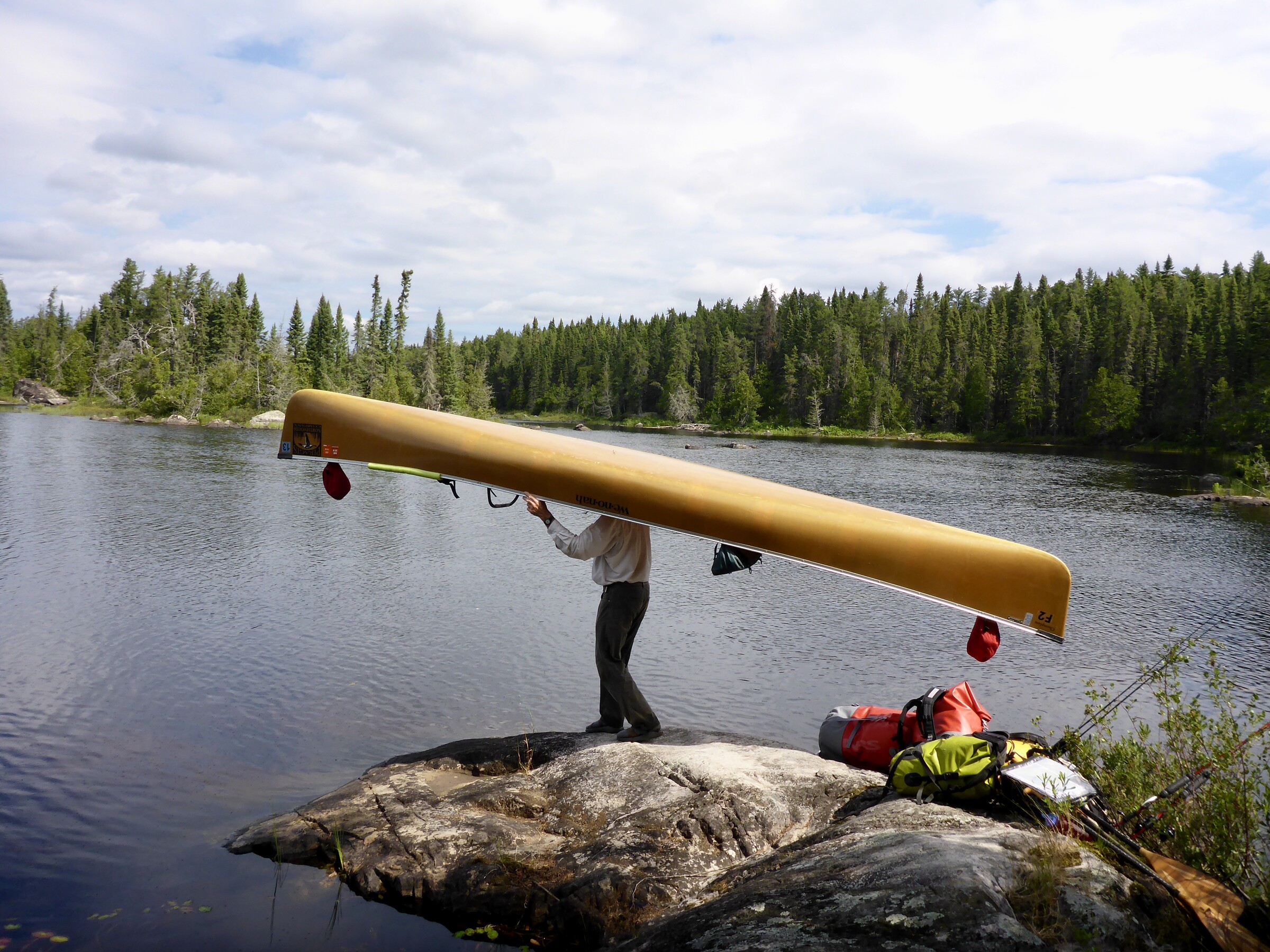 We caught a pike and a couple of small walleye in the waterfall and then weaved through the rocks to the next portage (197m) avoiding a couple of rapids. At the current water level (high) they looked runnable but we have the wrong boat for that endeavor and we decided it would be better for our marriage to portage. The portage was an easy blueberry lined trail over a low ridge with a little campsite in the middle and another small spot on the north end. Tony caught a few small walleye in the current before we paddled on to the next portage (listed as 36m) around a waterfall and sporting a comfortable 5*camp. It was now 130pm, so we lunched on the ledge and then decided to stay. It’s an awesome spot with lots of flat, rocky tent spots-trees large and small behind the big firepit, and a beautiful view of the little waterfall. 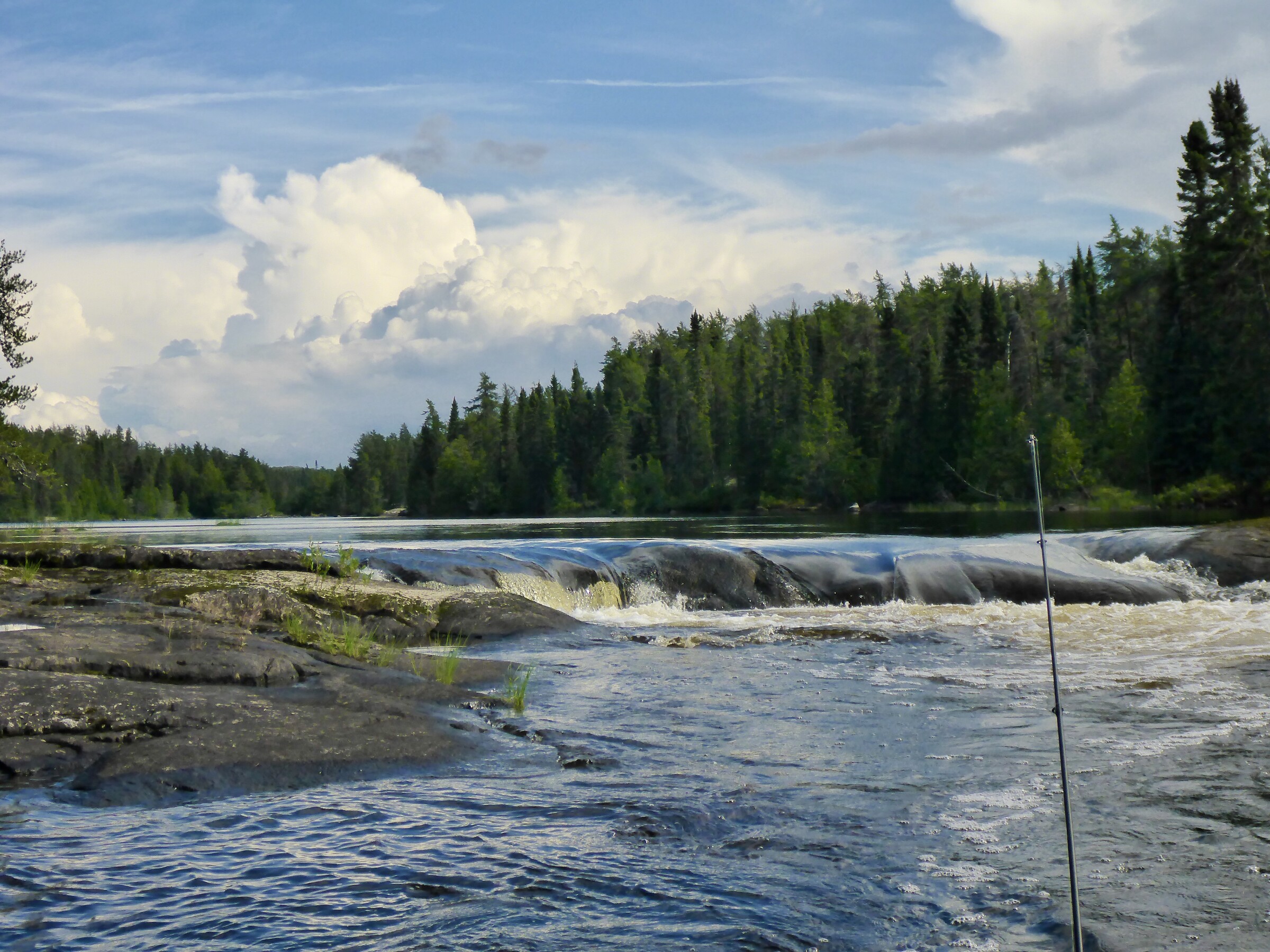 We set up camp, went for swim, and then I watched the clouds blow in as Tony napped. Later many walleye were caught in the holes below the current. 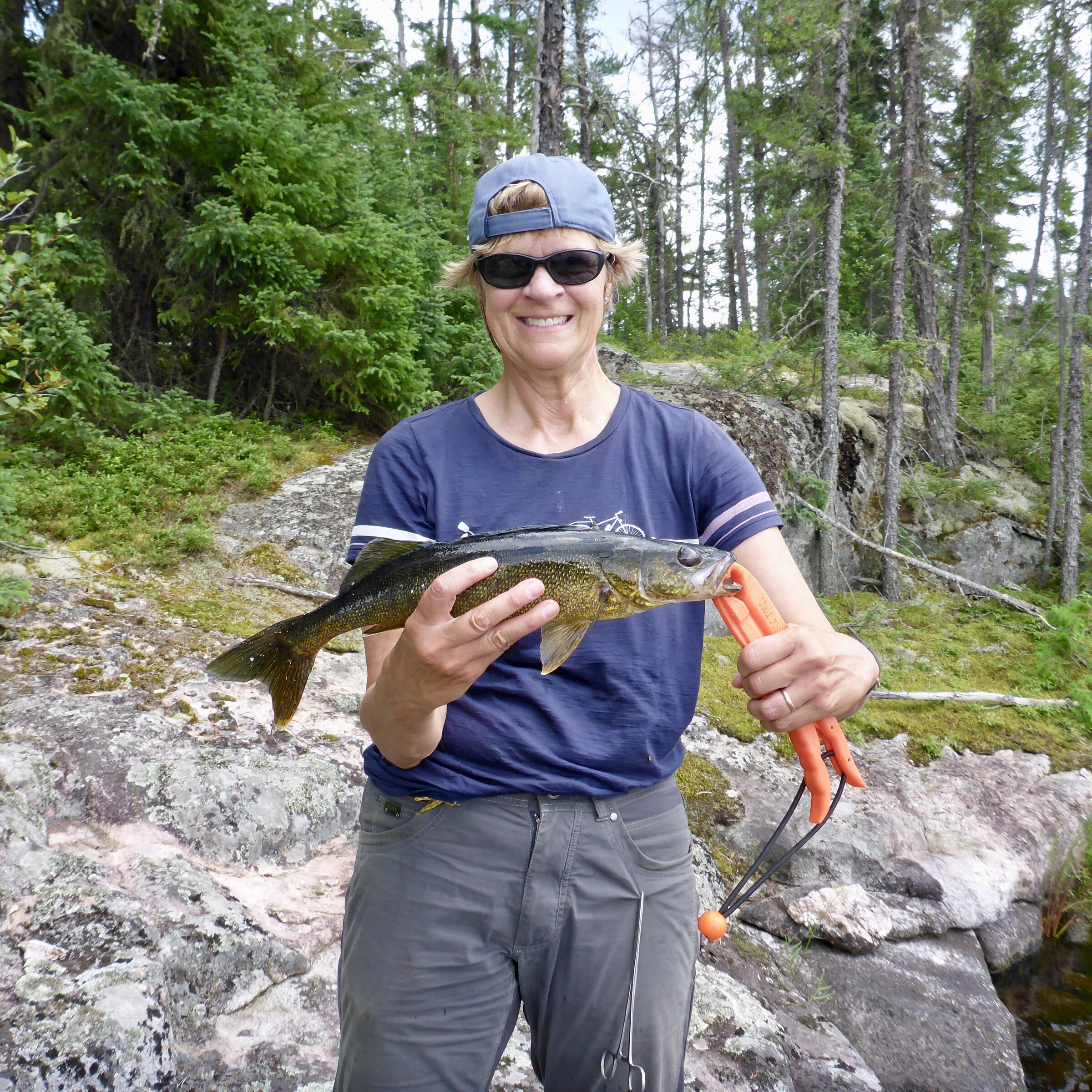 It rained HARD from 500-700pm with some distant thunder rumbling. We huddled under the tarp making a dinner of fish tacos and sipping tea as the sun tried to break through, but it succeeded only briefly. The night proved warm and damp with the sound of the falls providing white noise.

•Mileage-3.51 miles •Portages-Maintenance only
It rained a little in the night and then HARD all morning. It’s a little early for a rest day but we decided over breakfast that it made more sense to wait it out or at least for awhile. Sunday’s weather report showed rain Wednesday through Friday with Thursday being the worst, but who knows really? Tony did catch two walleye from shore during a brief lull-very brief. Today was also the “return of the slugs”. I started my day by picking ten out of my Crocs-slugs on the tent, slugs on the PFDs, slugs, slugs, slugs. Where do slugs go when it is not raining? 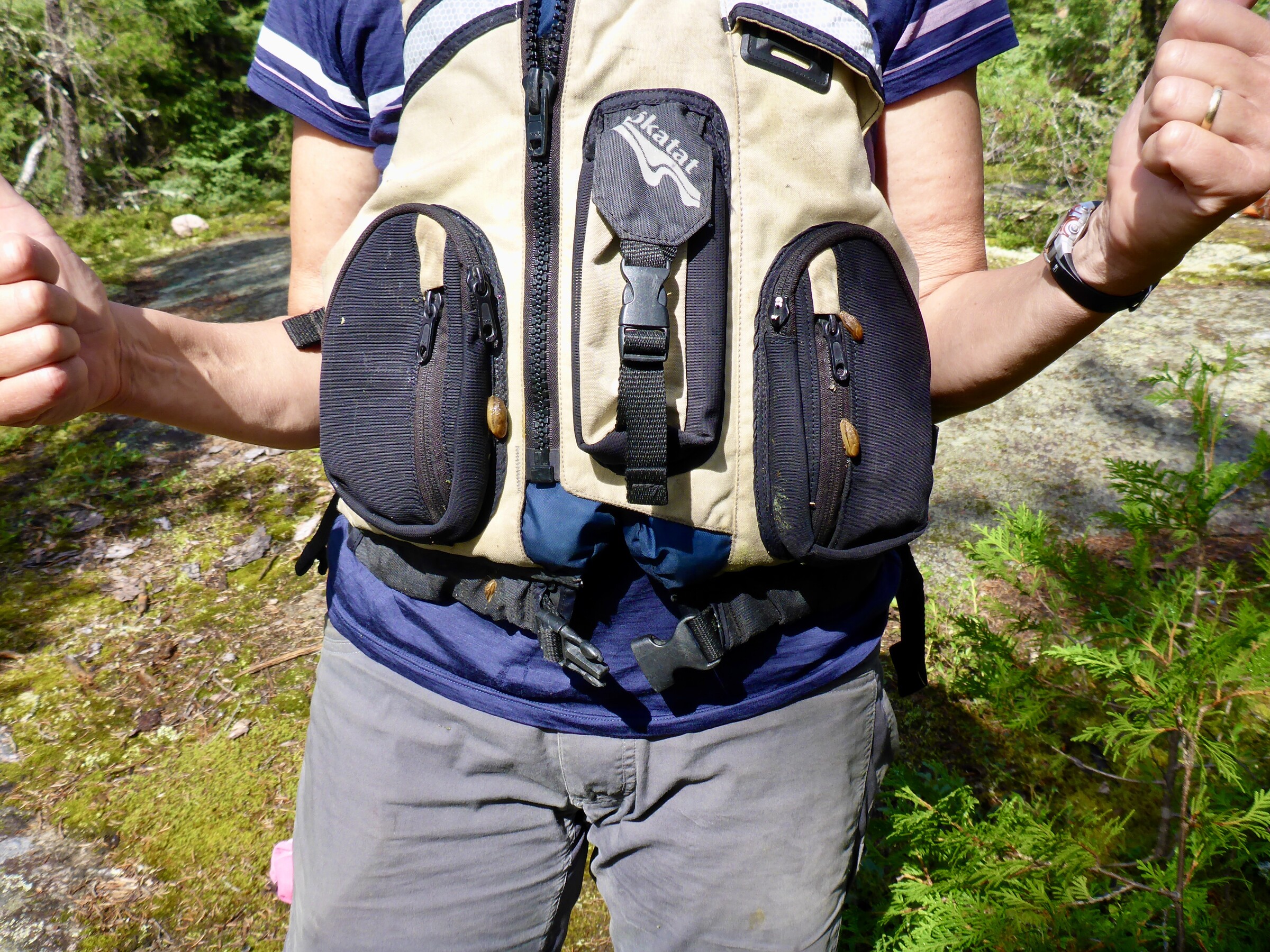 At 100pm it was still pouring down rain so we whipped up some tomato soup and quesadillas that really hit the spot. Next, we were forced to break out the cards and start our traditional Gin Rummy tournament. The rain finally stopped around 230pm and the clouds started to break up. 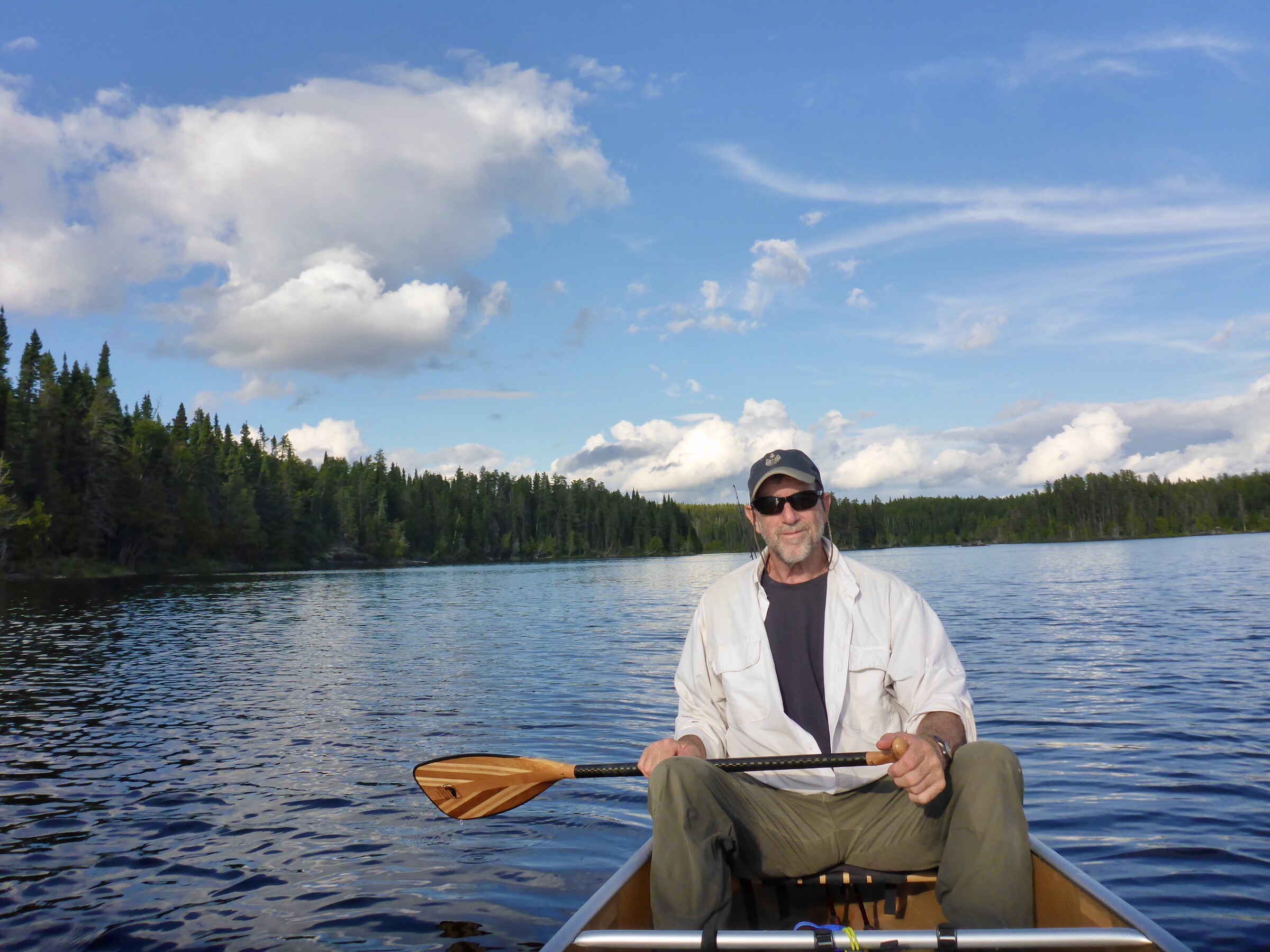 By 430pm it was full on sunshine so we went for an evening paddle/fish (more paddling than fishing) down to tomorrow’s 650m portage. 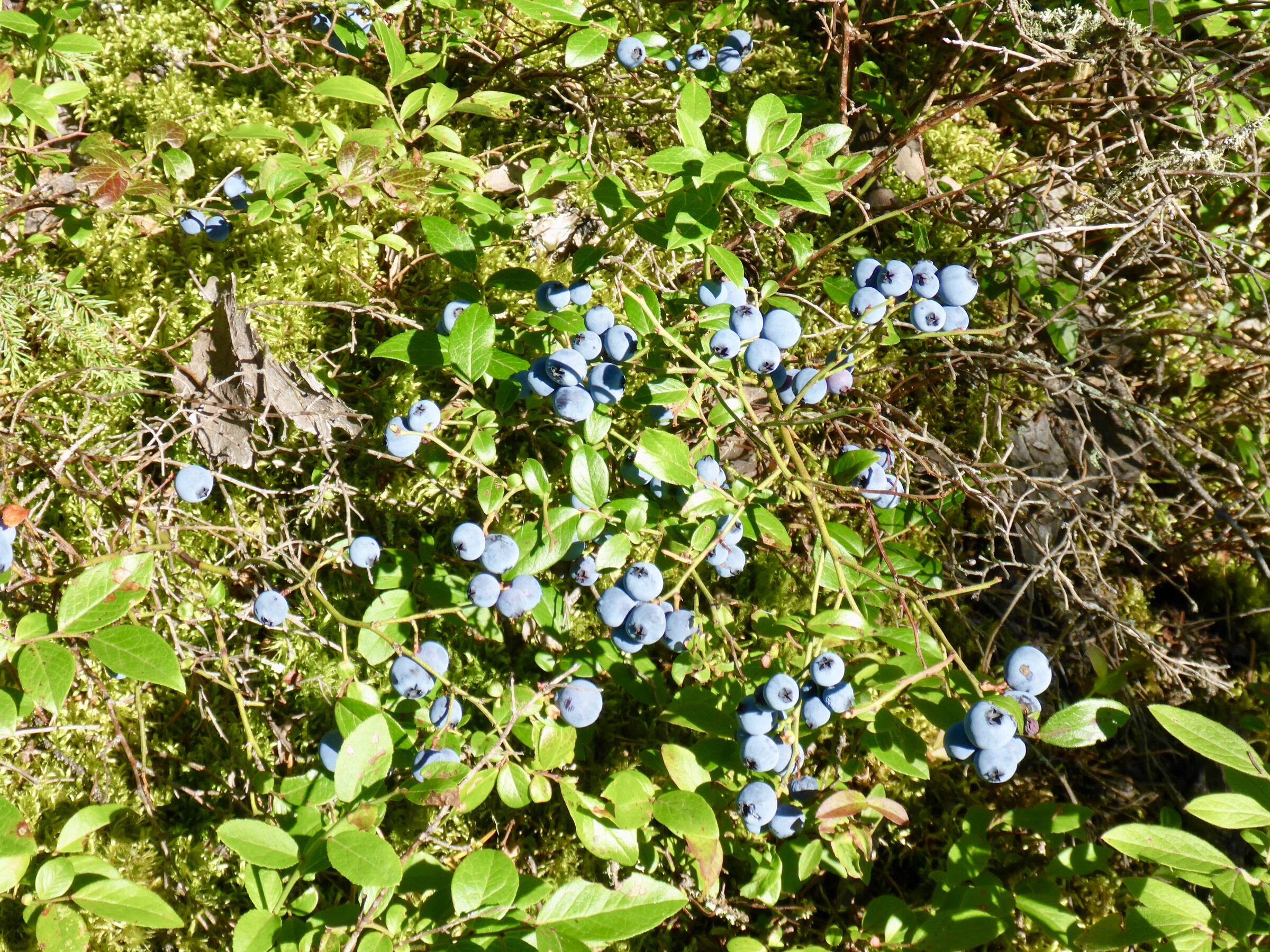 Here we cleared a few downed trees and snagged handfuls of ripe large blueberries, then returned to camp for Sundried Tomato Smoked Salmon Pasta with a shortbread cookie chaser. “Red sky at night. . .” I woke up briefly at midnight to spy the Big Dipper above and lightning to the west. Hmmm, we’re hoping to make some miles tomorrow.