Going Solo from Bower Trout to Ram
by Buck47

Trip Type: Paddling Canoe
Entry Date: 06/09/2007
Entry Point: Bower Trout Lake (EP 43)
Exit Point: Ram Lake (EP 44)
Number of Days: 5
Group Size: 1
Trip Introduction:
I am not sure what inspired me to take a solo trip? Something over the past year set it as high priority. One of the reasons I wanted to go solo was that my wife and son probably would not enjoy the cold water and bugs of early June. Another reason, was that I could not get any of my fishing partners to commit in February or March. So I bought a Wenonah Prism from LaTourelle’s the first weekend in April and started paddling and portaging it around home. After this there was no turning back. Next I needed to find a route I would enjoy. So I chatted with Tryvge, read Larry Ricker’s trip report and saw his pictures online at http://www.lhrimages.com/pictures/bwcaw/bw0307/index.html and decided this was the trip for me. It is a little tougher than the Warden and Jr. would like. It is a trip that would be challenging but relaxing with a little fishing time to myself.
Day 1 of 5
Saturday, June 09, 2007 Day One and on to Lake Vernon At 3:45 AM, I left home with a thermos of coffee and a nervous feeling about being gone from my family for five days. For the past two months this has been all I could think about. As the Warden said, “You are obsessed!”

My first stop was Two Harbors at Mc D’s at 5:30 AM and they just unlocked the door. I am their first customer of the day. That has to be a first for me. I really enjoy driving the North Shore early in the morning. Traffic moves at a nice pace, except for the old (greenish?) school bus I passed near Beaver Bay/Silver Bay, that has three aluminum boats strapped to the roof at different angles so they fit. That was an interesting site.

I pulled into Grand Marais Ranger Station at 7 AM. I am the first of the day again. Since I was solo and first of the day I was rewarded with a pass on the video. I aced the quiz, filled my water bottles, and was on my way. I noticed 5 vehicles in the lot and a line is forming inside. On to EP 43: Bower Trout.

The first left after crossing the South Brule River is 325 and I took that to the stop sign then hung another left. A quarter mile down the road a sign in the bushes on the right marks the Bower Trout landing. There were 3 other trucks in the parking lot, 2 from WI, 1 from MN. I unloaded the truck and carried everything to the lake. The carry was farther than I thought it would be. I drove my truck to the Ram Lake EP 44 parking lot after driving by it and finding it on the way back. There were 3 vehicles there all from MN. The walk back follows Fiddle Creek and it was making a lot of noise flowing down hill. There were a lot of moose tracks on the roads. Back at the parking lot of Bower Trout a young couple with a Brittany were unloading their SUV. I thought there was only one entry a day at this lake and I had it. It didn’t matter because I never saw them again. It is a beautiful day, I am guessing in the seventies and a west wind is picking up. I was hoping to be paddling before 9 AM but it is well after 9 AM before the paddle gets wet.

The 90r into Marshall Lake was easy, and the 30r into Dugout Lake was also easy. So far my feet are dry. The only thing I have forgotten was my new insoles for my 20-year-old Red Wing Irish Setters. They don’t feel the same as the sandals I have been kicking around in since April. The new used Wenonah Prism at 36 pounds is actually fun to paddle into the wind. On the East side of Dugout Lake it narrows and some large rocks makes the paddle upstream interesting but passable as long as I took my time and didn’t get flustered. I am glad I bought used because I have already scratched it, but I can’t tell what scratches are mine and what ones were already there. I feel like a 16 year old who just passed the drivers test and has the parents’ car out for the first time. Oops don’t know how that scratch got there. A major fire went through Dugout Lake many years ago. There are a lot of rock outcrops exposed and very few large trees. Yet it is still green.

The next three portages were fairly muddy but my feet are still amazingly dry. I sure like the Merino Wool socks I bought after hearing about them on the BWCA.com message board.

The wind is fairly strong but the narrow channels and small lakes have kept me sheltered from it. Swan Lake is next and it is a bigger lake. With the wind coming out of the west Swan will probably have some white caps. Sure enough when I get there it is lathered up and I am getting a little tired. I am unsure about paddling across. My solo skills are still being defined. I am tempted to camp on Swan for the night and rest. The first camp is open but I figure I would like to see the second camp. It would have a nice breeze. The second camp has a solo and an aluminum can dock there. I paddle on after I look back and see I have an audience at the camp watching me. The creek going into Swan bends around in all directions. I am looking for the portage on the north bank as the Fischer Map shows. I paddle as far as the creek lets me and I turn around. On the south side I find an opening that looks like a portage. The portage is 292r. They should round it to 300 because I doubt anyone would know. I unloaded and hauled the Mason pack and fishing poles first. The creek needs to be crossed and where the trail crosses the stream the water is waist deep. I notice some brush trampled down 10 yards upstream and see 2 trees crossing. If I am careful I can keep my feet dry as long as the trees can hold the 300 pounds I am at. Half way across I slip off, thigh deep water, wet feet, blood running down my leg from the scratch I got from a branch sticking off the tree. Dumb move. Lucky I didn’t roll an ankle or blow my knee out. I think about this dumb move to the end of the portage and at the end a young moose is standing in the water across the bay. I am exhausted and my camera is in the other pack at the canoe. I slam some water and back I go. I cross the stream twice more not caring about wet feet. Now I am worried that the two campsites on Vernon are taken on a Saturday afternoon. It must be easier to get to Vernon through the Brule especially with a west wind. What was I thinking? I will be looking for a spot on the Brule on Saturday night. It must be suppertime. I have not eaten since McD’s. Of course I had to take the challenging route.

The wind is tough on Vernon and I am exhausted. I push on looking for the campsite on the north side. I had seen a picture of it online and it is what brought me here. I come around a point and there is a red canoe sticking out from shore. Some one has the camp. No the canoe is at the portage on the other side of the rapids from the camp. The camp is empty. I paddle hard to the riprap protecting the shore. I pull my packs out, get the canoe on land, take my boots off and take the GPS out to see what time it is. To my surprise it is only 3:45 PM. Twenty-four hours ago I was leaving my classroom for the summer. Twelve hours ago I left my wife and son home sleeping. If I would of floated in here at 4:00 PM, the red canoe with 2 aluminum cans would be sitting here instead of me. Instead they head for the vacant south campsite. By 5:30 PM I have camp set up.

The wind died down and the biting knats mixed with biting flies are annoying me. I try the fishing and pump some water. I caught 2 smallies about 18” and a short northern. I really don’t feel like cleaning and eating fish tonight. On the way back I had a pair of Loons surface ten feet from me. They dove back down and I could see them swimming underwater next to the canoe. I went back to camp and boiled some water on my Primus Techno Trail. Mixed in some Bear Creek broccoli and cheese soup mix, with some Romen noodles and salami. I wiped the mess clean with a couple of tortilla shells. Washed it down with some Tang and it was better than any meal the school can cook up.

The creek with the rapids is flowing out of the Brule. After I hung my food using the baseball with a thin rope screwed on as my throwing weight. (Another successful trick I read about on the message board.) With fishing pole in hand I waded out in my boxers casting "Old Faithful", a black and silver number seven Rapala Countdown. The first ten casts produce 3 smallies and a nice walleye. Later I caught a 5# walleye. It was a good fish to end on. I was a getting a little cold standing in the water. A clean pair of Merino wool socks were just the ticket in the sleeping bag.

The campsite had been a little abused, or well used. The rocks around the fire grate were thrown everywhere to make room for the burning of large logs. The log benches were pulled apart, and there was a lot of small pieces of garbage lying around. The sound of the rapids really makes this site special. I am debating on staying tomorrow or move on and explore other parts. I am dead tired. I think it will be a decision left until morning. I canoed seven miles, portaged 487 rods and have the campsite I had dreamed about for months. 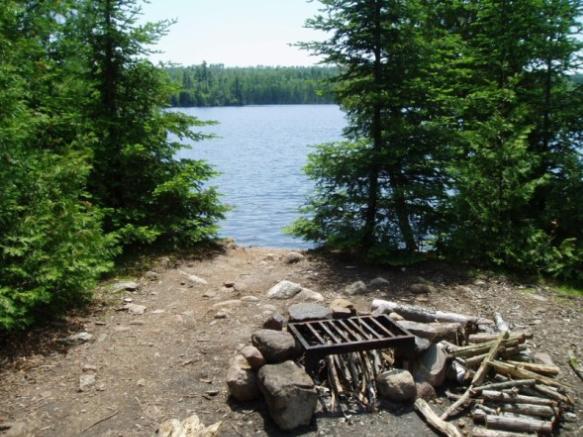