Grandson;s Introduction to the BW
by dickb

Trip Type: Paddling Canoe
Entry Date: 06/14/2007
Entry & Exit Point: Moose Lake (EP 25)
Number of Days: 9
Group Size: 2
Trip Introduction:
This has been a trip in the making for several years. Finally got the opportunity this year. Friday June 9 Left DC about noon and headed to TN to pickup grandson. Got to Morristown about 10:30pm Saturday June 10 Did last minute shopping. Made grandson go over his gear checklist, bug proof and pack his gear. Sunday June 11 Left Morristown about 4:30am and started the 2 day drive to Ely. Got past Chicago and decided to spend the night at a hotel. Monday June 12 Up about 5:30pm and had the continental breakfast and on the road about 6:30 am. We arrived in Ely about 3:30 and stopped by VNO to introduce ourselves. They suggested we come back about noon on Wednesday since our departure date was not until Thursday. Got to the Kawishiwi River National Forest campground about 10 miles south of Ely on MN1. We set up camp and then back to town to get something to eat. We asked around with several people recommending Wiseguys pizza. Decided to eat there Turned out to be a good recommendation. The pizza was good and so was Hedie's service. We walked around town for a bit and then back to camp. We sat around the campfire watched the stars come out and then to bed, Tuesday June 12 Woke up and back to to town to eat breakfast and pick up any last minute items. Bought a deck of cards which proved to be a good investment later on the trip. Visited the Wolf and Bear center ate a late lunch/early dinner (Walleye sandwich) and back to camp. Went to swimming area and Jr got in for an hour or so. We enjoyed a nice campfire that night just sitting around talking and watching the fire. Wednesday June 13 Got up broke camp and into town for breakfast. Met John at VNO about noon and we went over possible routes, the food and gear pack. They gave us the pack for our personnel gear and we checked into the bunkhouse. We picked out a Wenonah Escape for our canoe. Since it had been years since I have done any fishing we bought our fishing poles in TN and decided to buy the tackle in Ely, so we purchased our tackle for VNO with a little help for the local experts. We agreed on a 6:30 departure time from VNO to Moose Lake. Took our gear and tackle to the room repacked, sorted our tackle and pushed down the barbs on the hooks. Jr wanted to go back to Wiseguys for dinner. We ate and brought the leftover pizza back to the bunkhouse something for breakfast to the bunkhouse. Jr went down to the store and hung out with the guys while I stayed in the room for awhile. Later I went down to the store and he was helping clean out the bait tanks, removing dead minnows etc.
Day 1 of 9
Thursday, June 14, 2007 Up at 5am to shower and eat breakfast (leftover pizza from Wiseguys). We got down stairs and on the road to Moose. We got to Moose for the tow to Birch and were on our way. We got in the water on Birch with Jr up from navigating and me in the stern. We made the portages to Knife with little or no difficulty. Just before one of the portages we got up very close to a pair of loons. We watched them for a few minutes and then we had to move on. We decided to double portage since this was Jr's first trip and my first since 1960 (before there was a BW - back them it was just Quetico-Superior). We had originally planned to go to Knife, Bonnie, Spoon and Kekekabic, but we changed routes after talking to some people we met on one of the portages. They said the first campsite on Knife decent and just a short distance from Portage Lake where they had good fishing. We decided to give it a try. John at VNO had mentioned that the 2nd campsite on Portage was good one. We got to the portage and left all the gear except the canoe on the Knife side. We took the 35R portage to Portage Lake and checked out the campsite. There were a couple of guys at the campsite, but they were only fishing for smallys from the bank. We went back and got our gear. By the time time we got back to the campsite on Portage they were on the other side of the lake fishing from some rocks. We set up camp and decided to do some fishing. When we had beached the canoe at the campsite we had left the canoe tilted at a slight angle to the right.  Without thinking too much of it I got in the back of the canoe and Jr started to push off. Since he had never canoed before, he was unaware of how unstable a canoe can be and splash in I went along with my digital camera. Of course, I had forgotten to put the camera in the water proof case which was in the pack. Naturally, the camera was gone and so was the picture taking. We went to the other side and fished from some rocks with no luck. We returned to camp and had a good supper of steak baked potato and desert. Except for the dunking we were off to a good start and Jr was enjoying the trip. It was nice to be home 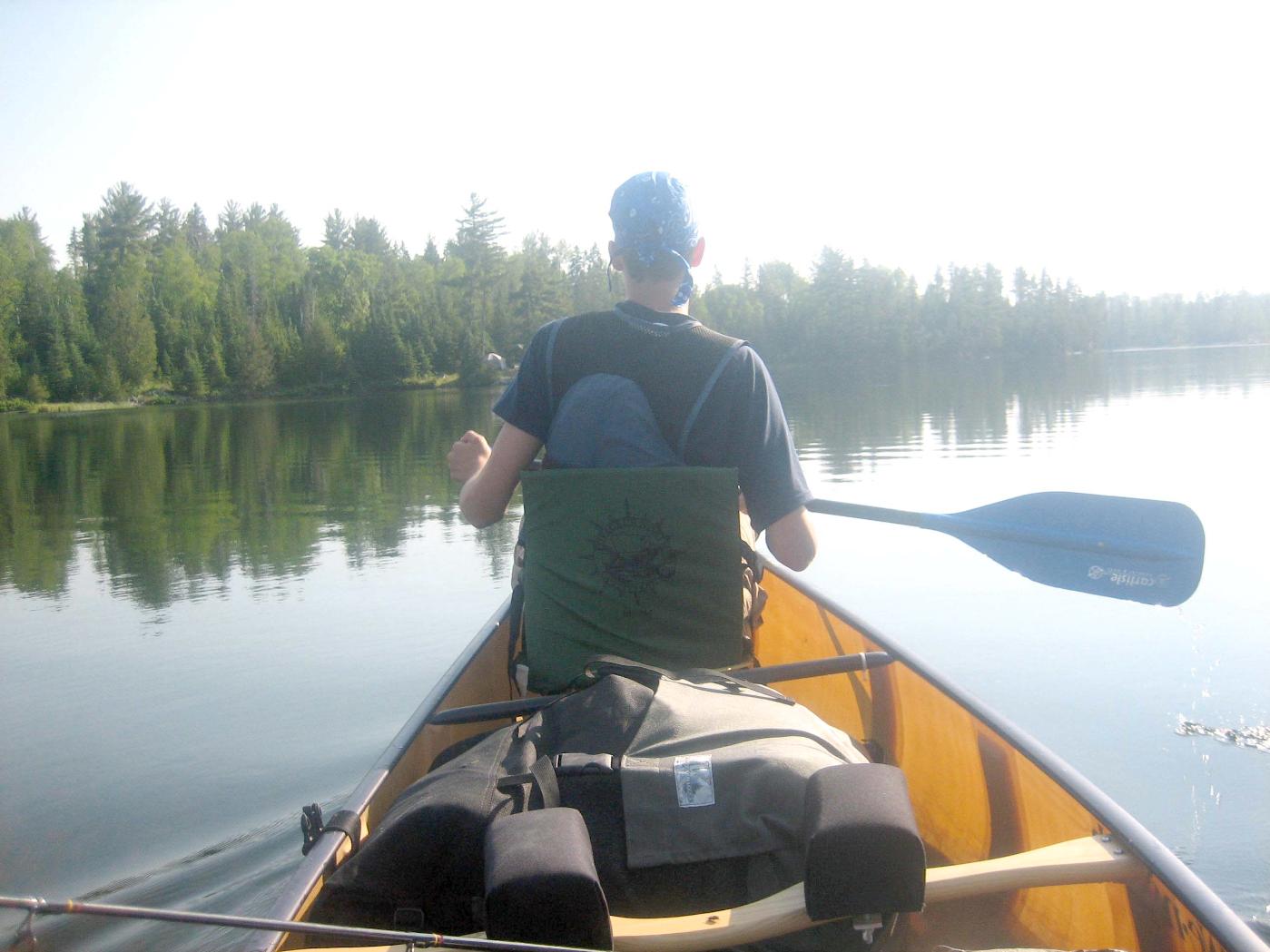 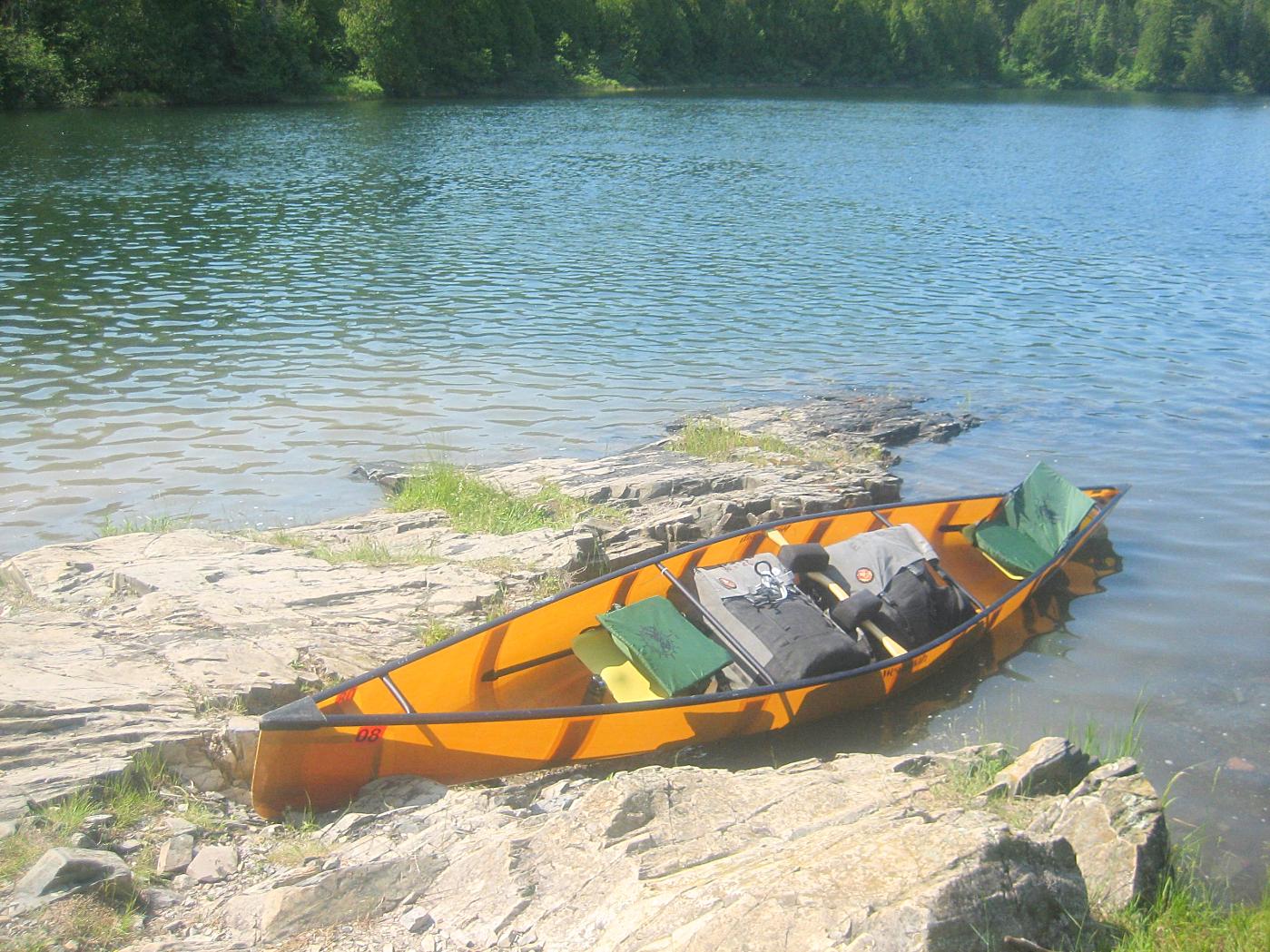 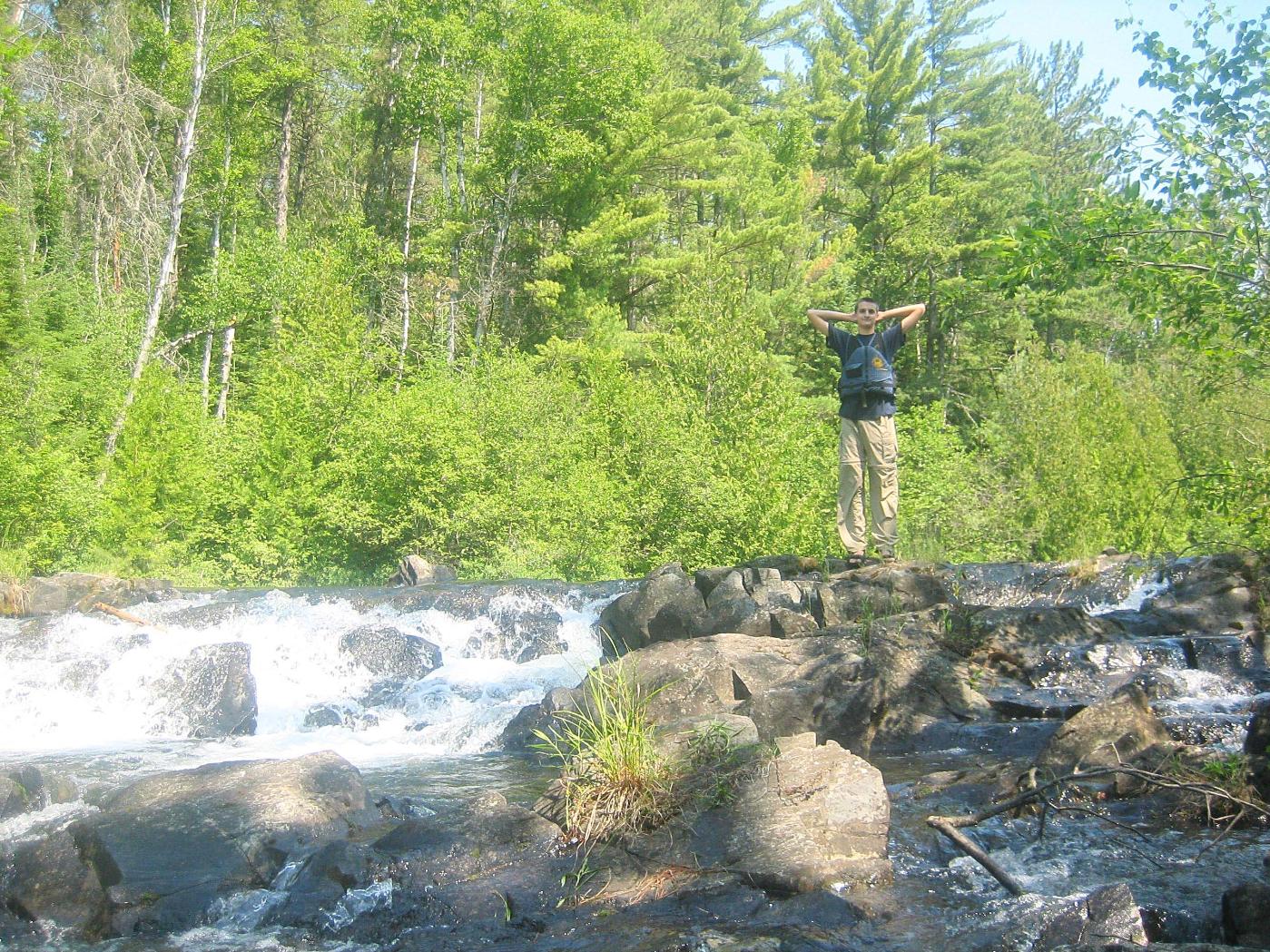