Trip Type: Paddling Canoe
Entry Date: 08/15/2007
Entry & Exit Point: Farm Lake (EP 31)
Number of Days: 4
Group Size: 6
Day 2 of 4
Thursday, August 16, 2007  We woke early, had oatmeal, coffee, and juice then broke camp. Loading the canoes we were off, heading south through Clear Lake. Along the way we spotted a beaver, and marveled at the huge boulders just under the water line. This small lake was clean and clear and we thought it might be good for fishing but pushed on rather than stop and try our luck. All to soon it was time to portage again. I had been through this portage at the south end of lake two years ago. It is amazing what a beaver damn and two years can do to a portage. It was muddy and about three quarters of the way across the 70 rods it just disappeared into the pond that the beavers had made. The alternate route that ran up through the trees was treacherous with loose dirt, rocks, and large tree roots. The end of the portage dumped out into a muddy mess were you had to push your canoe out quit a ways before jumping in. This is were our trip took a wrong turn. Going to our right instead of left we headed south down the South Kawishiwi River. With the wind coming at us head on we paddled on, looking for a portage that wasn't there. After a time and a lot of map reading we realized our error, but were nearly to entry point 32. We decided to make camp at the first camp site northeast of the 32 entry point portage. This was a great camp site with several level areas to set tents. It also had a good place to land all three canoes and logs around the fire grate to sit on. We decided to stay here and fish the river the next couple of days. Stetting camp we again picked up trash and stowed it. I hope this isn't happening everywhere but suspect it is. We all had lunch. chicken from a pouch in wraps with cheese. Then we started our fishing and exploring. Several small northerns were caught and a few smallies. Before long it was supper time and we all met up for beans and rice and yes, more chicken from a pouch. It was very tasty and soon the dishes were done, bear bags back in the trees and we were off fishing again. Soon it was dark and we built a small fire, sitting around plotting the next day activities and talking about how poor of a map reader I was. Soon it was time to hit the tents, an owl hooted us off to sleep. My son at thirteen hadn't heard an owl in the wild before and after a few calls just had to ask"what is that dad". Laughing I said not to worry it was just an owl and soon we were sleeping. 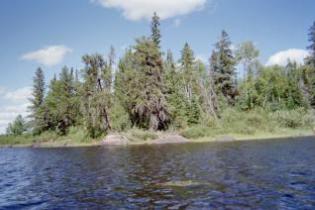