Everything Moves in Waves: A First Timer's Solo Trip into Boundary Waters
by ChadLeo

Trip Type: Paddling Canoe
Entry Date: 08/27/2007
Entry & Exit Point: Lake One (EP 30)
Number of Days: 5
Group Size: 1
Trip Introduction:
Report
The day before I left home for a five day solo trip through four lakes in the Boundary Waters my mother was panicking. "What if the bears get you?" She asked having just learned that the area is a natural habitat of black bears. I wasn't worried about the bears although I did have a lot of my mind as I drove up to Ely, MN on August 26th for a night in a bunkhouse. A father and son from central Texas stayed in the same bunkhouse and they were very gentlemen-like and reversed my opinion that all men from Texas are idiots. They bought me dinner that rainy night and when we returned, we packed and double-checked our gear before our respective adventures ensued.

I was up early and saw a nice doe and her fawn then later a gray wolf as I drove to my entry point on Lake One. This was my first time in a canoe in over ten years and a few hens splashed out as I paddled away alone. I made it through Lake One and its easy portages with no problems but when I reached Lake Two the sky darkened and the wind and waves picked up. By the time I reached Lake Three where I planned on making camp, I was struggling against the wind and as I moved south around a small island the wind had me sideways. With everything in me I tried muscling my way straight to no avail. The rock studded shore of the island was getting closer and for the only time on the trip I was really scared. This is when I had no choice but to give in and I learned a big lesson: sometimes you need to have faith and let nature take you where it will. Luckily for me the winds pushed me to the sheltered north side of the island where I regrouped then moved on to another island for lunch and a break. The winds died down later and I found a nice campsite upon a 20' rocky cliff on the southeast side of the lake. That night it thundered and rained like I have never experienced before in the wild. 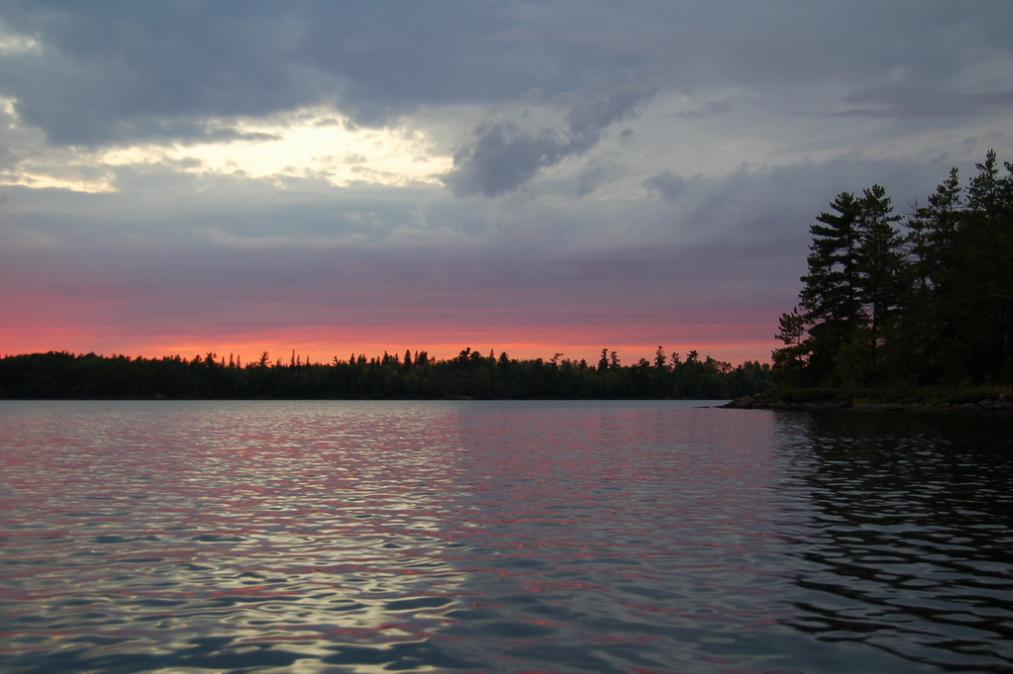 The next day was gray and overcast. I spent most of the day fishing and had wonderful luck catching walleyes off of a small island in the middle of the lake. Before I returned back to camp at dusk, the sun finally showed me some of its brilliant colors that I had been anticipating for so long.

When I returned back I sipped on some whisky keeping my eye out for the full moon. It was still cloudy but for a few moments its rays shined through. That night I fell asleep quickly waking several times to a bull moose calling from the south. 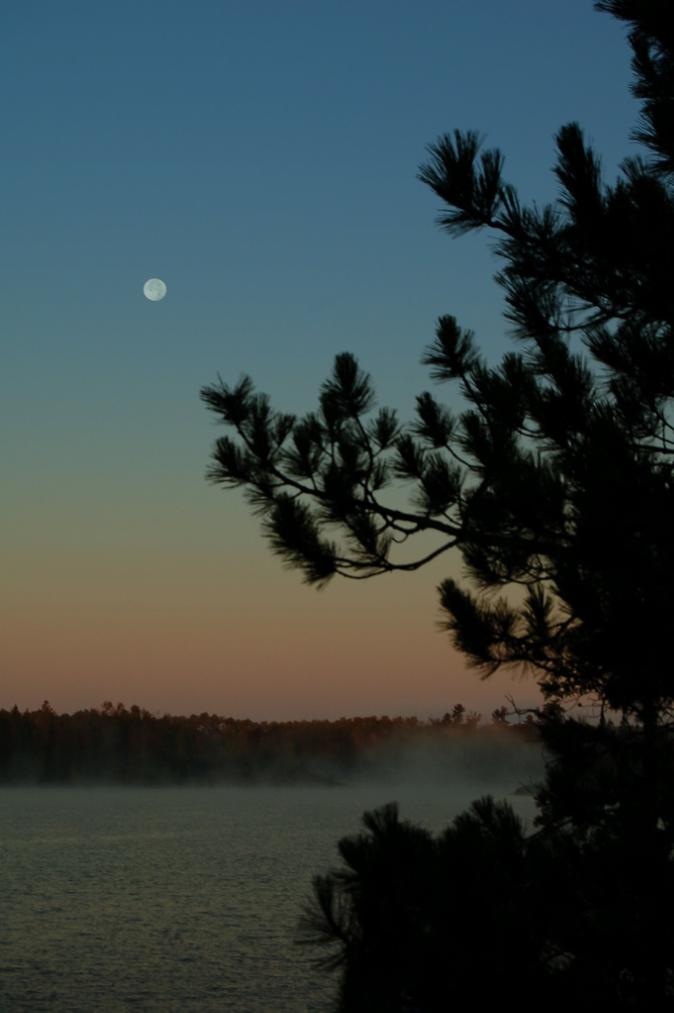 On Wednesday I woke up with the sunrise to a very cold morning. The sky had cleared and temperatures had to be in the lower forties. A dense fog covered the lake and was slowly burning away with the daylight and the full sturgeon moon stood small but visible before it finally sailed away. 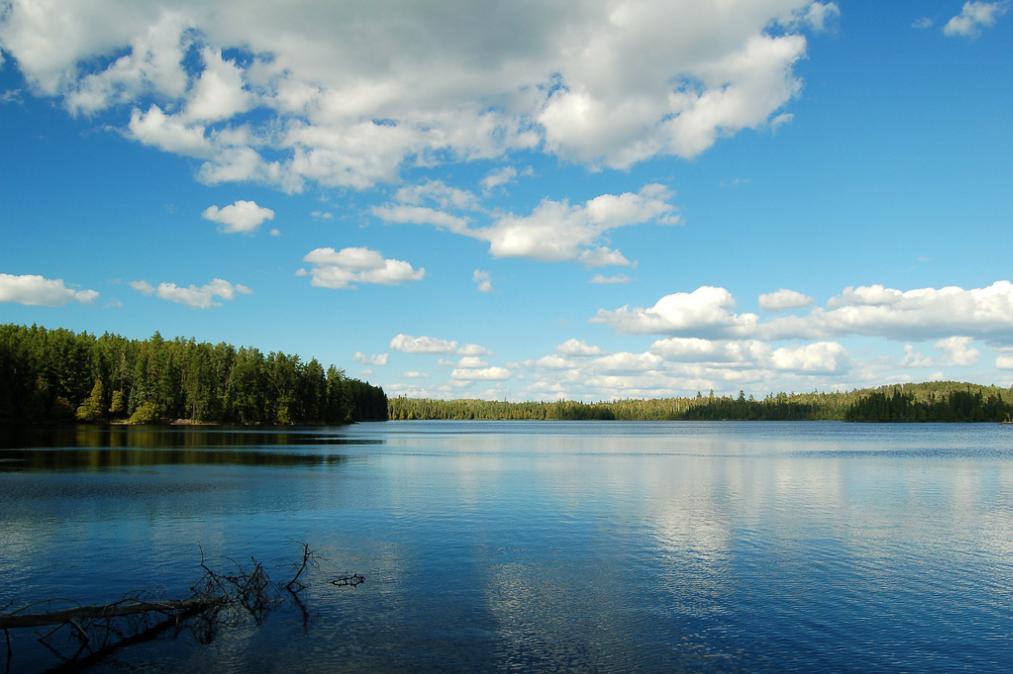 After putting on my cold weather clothes, I made some hot tea and curry soup then packed my gear for my trek to Horseshoe Lake. I portaged into Horseshoe Lake by 9:00AM and found a very nice and secluded site in the southeast arm. This was going to be my day to relax and the sky was blue and filled with beautiful white clouds that passed by with the light breeze. 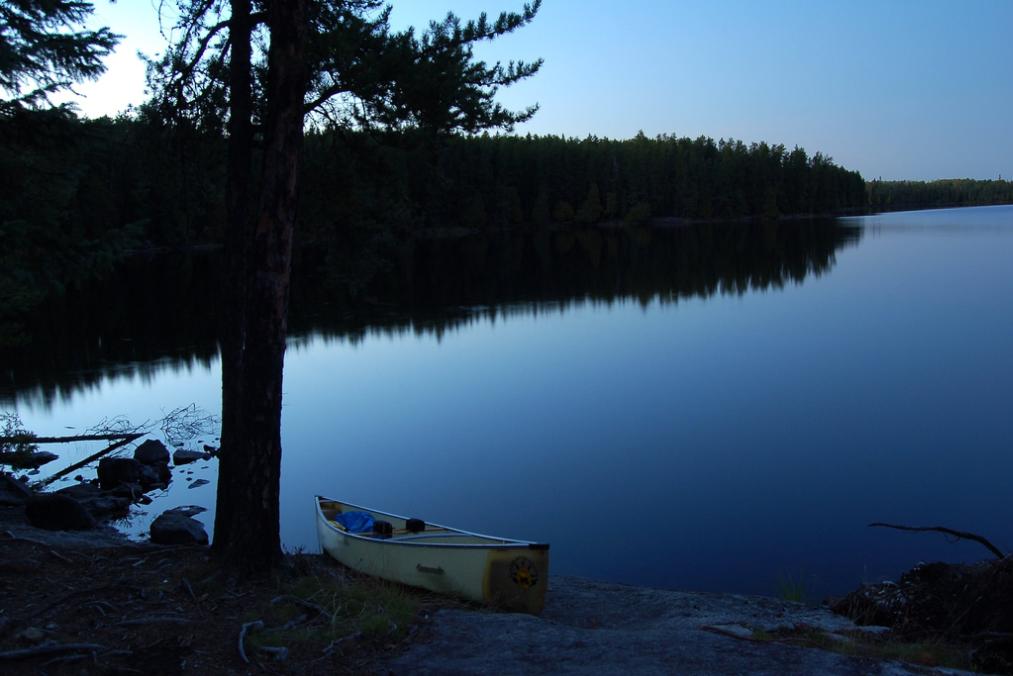 The day was perfect and I only briefly saw one other canoe. It felt like the lake was all mine. After a swim and some much needed yoga, I made pasta and fried walleye for dinner and drank one of the beers I had portaged in. The sun set quickly and I snapped a few photos as the lake shown calm and as smooth as glass against the fading colors of the sky.

That night as I layed in my small solo tent, two loons talked to each other from each side of the lake. I fell asleep dreaming and again woke to a bull moose calling and then later the howl of a lone wolf. They were telling me how good it is to be alive.

The next morning Horseshoe Lake was calm and clear. I packed up quickly and headed off back to Lake Three with my eyes on an island campsite. When I reached Lake Three, not a soul was to be found which felt odd since I had seen several boats my first few days there. I paddled on smoothly with the light breeze and the site I wanted was open. The site was on the east side of a large island in an area where several smaller islands converge and it pointed out to a wonderful view of the north and east. I set up camp and wandered around the island a bit before spending the rest of the day on the water fishing. The day was sunny and breezy and very hot and I sunburned my face and hands. The fishing was great but four days of hard work was making me tired and sore. 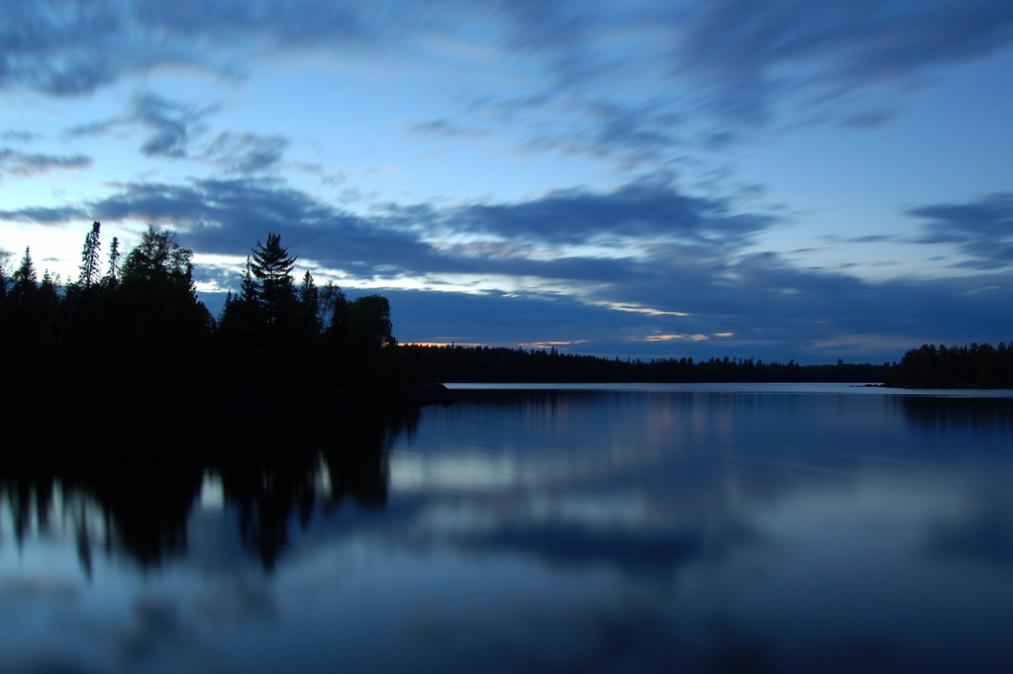 I fished hard right in front of camp and later returned and cooked a nice dinner and had my last beer as the skies darkened. The critters of the night kept me up for a while but soon I fell asleep with a nice cool breeze blowing through my tent. The next day I was heading home. 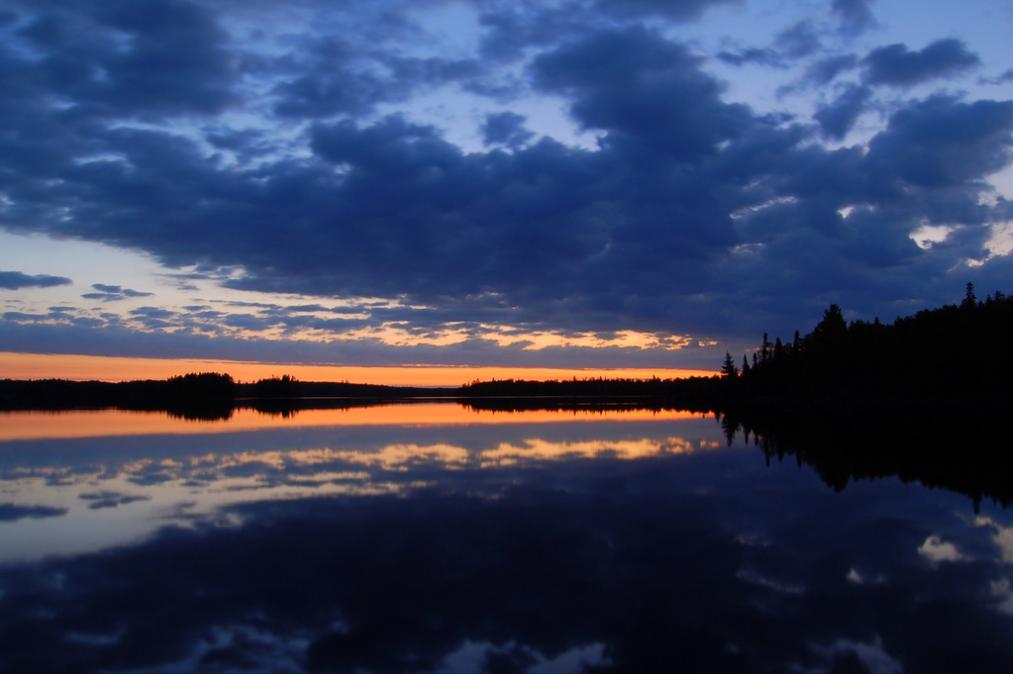 I peeked my head out of the tent early in the morning and saw the first light of day. 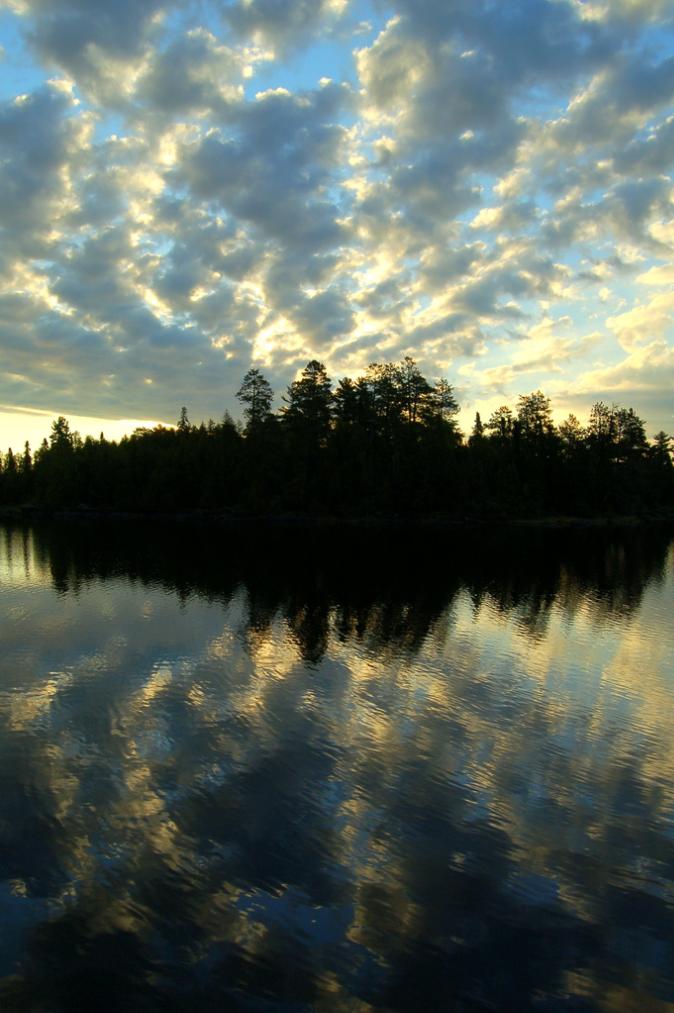 The chilly morning air made me scramble for clothes as I stepped out into the most magnificent sunrise of my trip. The horizon started bright red and then yielded into yellow and blue through the light clouds.

I had oatmeal and tea for breakfast and then packed camp. Once the sun rose, the winds picked up and while looking at my compass I knew they were going to battle me all the way out. I sat and read from Ivan Turgenev's "Sportsman's Sketches" hoping the winds would die but the horizon showed no signs of change and I knew it didn't look good. I battled the stiff north breeze through all of Lake Three and then again through Lake One before finally making my way out through where I entered. Four men were on shore ready to embark on their own adventure and a beautiful young black lab with a red bandana around its neck swam out to my canoe and welcomed me.

I pulled my canoe on shore exhausted yet content and took my time packing things up. An older gentleman and I spoke a bit about fishing and the weather and it really felt weird to have an actual conversation with a person, but being alone for five days sure made me a good listener. Time alone with nature can do wonderful things to you if you let it. It doesn't often come easy or without a price though, but then again, nothing worth a lick ever does.