Tsunami in the BWCA!
by GaryACE

Our invitation for “MCA does the BWCA” did not meet with overwhelming response. In hopes of attracting a core group to re-activate the BWCA special interest group once present within MCA (Minnesota Canoe Association), entry permits were acquired and preliminary plans made for one or more groups to go into the BWCA around the week after Labor Day this year. Tom Mings (MCA Director thru ’07) was delegated the task of getting the permits and being Trip Leader. Entry point #43, Bower Trout Lake, was chosen. Other participants making up the cozy group were Bill Krueger, MCA Vice-President (and acting President) and Gary Hennes, MCA Director thru ’09.

We arranged to meet at the Gunflint Ranger Station outside Grand Marais at 4:00 pm Tuesday September 4, 2007 to pick up our permit for entry the next day. Drought conditions had prompted the Forest Service and Cook County to post a total burning ban throughout the BWCA and Cook County, including private property. Smoky the Bear at the entrance to the Ranger Station Saturday September 1 was pointing out the fire danger was “EXTREME”. Sunday night some areas near Grand Marais received as much as 2.3” of rain – barely enough to settle the dust. Tuesday, Smoky was saying the fire danger was down to only “High”.

We reached the Bower Trout Lake entry point about Noon Wednesday September 5. Access and parking is through an active gravel mine, originally used to build a logging railroad grade along the north edge of our route. A 72 rod portage took us to the actual entry on the lake, a mucky edge of marsh with a small boardwalk/dock to aid in launching loaded canoes. A short paddle to the west end of the lake took us to the first of five portages enroute to our first evening’s destination – Swan Lake. Again, a boardwalk greeted us to traverse the marsh to solid ground along the South Brule River and a short carry to the next lake.

Basically, the route follows the north shore of the South Brule River from its beginning at the Southeast corner of Brule Lake through two larger lakes, Vernon and Swan to the east, followed by a series of small “lakes” which are little more than wide spots in the South Brule River before it begins its rapid descent to Lake Superior at Bower Trout lake. Mucky landings and “Rock Gardens” greeted us at many of the portages, and even at narrow spots where the lakes were no more than 25 - 30 feet wide. Emergent vegetation and generally shallow conditions persuaded us to defer pumping/filtering drinking water until we got to Swan Lake.

It was nearing dark when we crossed the final portage into Swan Lake and raced for the preferred camp site we had chosen – the furthest and northern-most site among three on the lake. Not surprisingly, none of the sites were occupied. Supposedly, this site was an abandoned logging camp and the afore-mentioned railroad grade ran along the ridge just above the camp. A lovely sandy beach was our landing site, with stone steps 2.5 feet up to the camp. We quickly chose tent sites up in a grassy area away from the lake and set up Bill’s four-man Timberline for he and Gary and Tom’s two-man Marmot for Tom and his dog, Max. Finally, supper was prepared by “WhisperLite” (remember the burning ban) and “head lamps”.

Thursday morning September 6 dawned still and muggy. Severe weather had been in the forecast, and it certainly looked like it was headed our way. None of us brought a Weather Radio along, which might have been able to pick up NOAA broadcasts where we were in the eastern edge of the Boundary Waters. (None of us had duct-tape, either – but that’s another long story!). There had been discussion of forging on thru Vernon Lake, a 290 rod portage, into Brule Lake, but it was decided to stay at Swan Lake at least another day in case the weather really turned bad. Rest, and a few fishing sorties and camp duties filled the morning and early afternoon.

After lunch, the sky darkened and it really looked like we were in for some rain. Bill and Tom, competent BWCA campers they are, decided to rig tarps for rain. One A-frame 10 x 10 went up over the dining area (remember the burning ban), prompting the move of Tom’s tent away from the drainage from the dining tarp. Another was set up over the Timberline, supplementing its rain fly, and another over Tom’s two-man tent. About 4:00 pm, the lightning, thunder and gusty winds started looking really threatening.

Gary crawled in the Timberline to “hold it down” (take a nap), while Tom and Bill continued to watch the approaching storm. Soon, it got dark as dusk and rain began to fall in buckets, driven by winds that seemed to gust nearly 60 mph. In the Timberline, protected by the addition of a Cooke Custom Sewing tarp, the chaos of the storm disturbed sleep, but hardly a drop of water penetrated the tent – everything stayed dry. It rained off and on all night long, with varying intensity.

Meanwhile, the relocation of Tom’s two-man tent proved not to be the best choice. A small puddle developed under about one quarter of it, and sleeping bag, Tom and all got dampened. Tom peered out of his tent in the morning. His Penobscot had been tipped over and secured the night before, with a bit of the stern hanging over our “beach”. “The lake is up to within an inch of my boat!”, he hollered to us in the other tent.

Swan Lake rose two and a half feet overnight! Low spots in the trails leading everywhere from our camp site were now streams, some as much as a foot deep. The strange noise from the ridge behind us we finally realized was a new waterfall, pushing debris out into Swan Lake just down the bay from us. The lake level continued to rise an inch or two Friday, and only began to drop when we left Saturday morning. Tom later found the following on a climatological site: http://climate.umn.edu/doc/journal/flash_floods/ff070906.htm. The nearest rain gauge we know of overflowed at 8 inches of rain – a 100-year, 1% probability for that area.

Friday finally became a decent “drying” day, with gear hung out on lines all over the camp. Exploring Swan Lake had been on the agenda, so Bill and Tom set out to at least look over the 290 rod portage into Vernon Lake. First, they had to paddle up a short stretch of the South Brule River, now in full flash flood mode. Next, they had to find where the portage trail started, now shortened by the flooding river. Not far up, the trail crosses a small stream as it enters the South Brule from the south. However, the “small stream” was now a raging torrent, approaching Class III as it poured into the South Brule! No way were they going to attempt crossing that! So much for proceeding into Brule Lake!

Saturday morning we leisurely broke camp and loaded up the canoes, not sure what we would find at the portages we had come over on the way in. As an old college friend of mine told me about his adventures in baseball – “You win some, you lose some – some get rained out.” When we were able to find the portage, it was now a gentle glide into a meadow, instead of a rock garden! Some of the others proved to be the same. Even rocky narrows in some of the lakes were no longer a problem – we just glided right over them. One even had enough current now to require some Class I finesse to pass through.

Others, however, were not so cooperative. As stated earlier, the route clings to the north side of the South Brule River, which was no longer a gentle stream bubbling along from lake to lake. Landmarks for portages had disappeared, replaced by the sounds of rapidly running water where the river departed for the next lake. At one point we had to wade in through a new stream bed which had been the trail, and then wade out through more stream bed on the other side, loading the canoes well up into the forest where the trail had been. Sticks and stones may break your bones, especially if you are wading in 18” of rushing water – but only a few scratches and skinned shins resulted.

The boardwalks we used on the way in were now several rods away out in the lake. Fortunately, we were able to load and paddle out past them. No muck for us – it was under 2 feet of nice, clean water – rapidly going our way! Even the emergent vegetation was no longer emergent – moose meadows, beware. The South Brule River was no longer a babbling brook trickling into each lake along the way – standing waves and debris extended out into each lake. For lunch, we stopped at a campsite adjacent to the river on Marshall Lake before returning to Bower Trout Lake. By the looks of it, anyone camping there Thursday night would have been surprised to find the South Brule joining them in their sleeping bag!

All in all, the trip had to be classed as a survivable adventure, a little wetter than most. Hopefully, this tale is believable. No doubts, now, please. 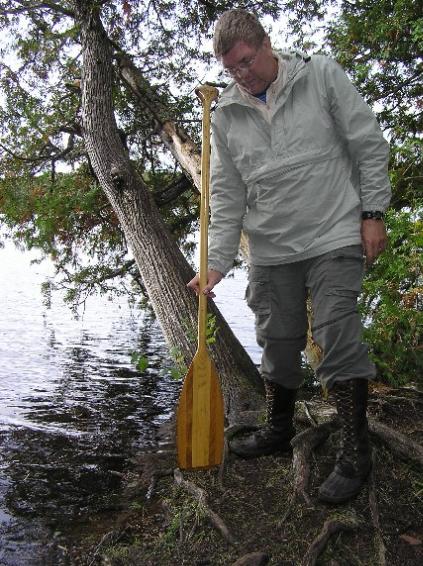 Tom Mings takes the measure of the depth to our “beach” on Swan Lake.