On very little sleep we were rushed into showers, eating, and copying down vital information from a couple of maps the outfitter had supplied (campsites, portage locations, and various points of interest). Next we packed our gear and loaded into a van, stopped off for some bait and fishing license, and began a two hour journey down a bumpy washed out dirt road through a rocky and some times desolate Canadian forest.

We arrived at the end of the dirt road and the beginning of the portage to Leanno Lake at about 10am. As we were unloading our gear and starting to get anxious of setting off into a new and mysterious land, one of the guys noticed something horrible. We were missing a paddle. We frantically tried to come up with a reasonable means of getting another paddle when the outfitter told us he would go back and get one after he picked up another party he had to wait for. We carried our gear down to the lake and hoped that we could possibly buy a paddle from his other party that was due to arrive any minute.

We pushed off our canoes and floated around the lake half heartedly fishing when Chet got the first fish. It was a small “hammer handle” pike but it was still the first fish. (It should be noted that if there is a pike in a lake and Chet wants to catch it, he will.) Slowly blowing around in the slight wind, getting our fist couple of bug bites, and waiting for another group because of our poor organization was frustrating to us all and our patience was running low. To pass the time, we shored up the boats and decided to get lunch out of the way. As we sat there getting lunch ready and pacing around we got our first glimpse of wildlife in the form of an otter that passed in front of us and checked out what we were up to. After lunch nobody wanted to set around any longer so Greg and Brian set off to meet up with the outfitter still sitting at the entry point. When they returned they informed us of the outfitters plan to wait a few more hours then leave and come back with a paddle.

Rather than waste any more time sitting at the entry lake, the crew decided to push on and send a canoe back to pick up the paddle later. From Leanno Lake we headed southwest to a stream flowing from the lake that eventually ended up in Kilburn Lake. Once we started moving and making progress we were able to relax. The stream was easily big enough to canoe and only a few log jams and small rapids had to be portaged around. The sun was shining and weather was absolutely perfect for us. It was apparently nice for the black flies as they began to swarm and most importantly feed. Ah, to be in the northwoods. The flies were of little concern to me because Chad had just landed a walleye and had it in the boat. I didn’t want to be out done and neither did anybody else, so the fishing progressed from leisure to serious. By the time we entered the first unnamed lake, after winding our way down the river, we had enough walleye for dinner.

We stopped and looked out across the desolate looking landscape that surrounded the lake. All the forest was comprised of small saplings and a few old, burn out, branchless trees that dotted the landscape. As we paddled across this unnamed lake we caught some movement along the northern shoreline and quickly realized it was a cow moose. Everyone stopped paddling and we let the wind blow the canoes closer. We didn’t get too close before she meandered off into the thick saplings and out of sight. That was the only moose we would see on this trip

When we reached the far side of the lake It was about the right time for a couple of guys to head back and pick up the paddle so we unloaded the gear from Greg and Brian’s canoe. With a lightened load they could travel nice and fast, we also lent them another paddle then sent them on their way. Chet, Chad, Mike, and I arranged to head on and set up a campsite somewhere on Kilburn Lake.

The portage onto Kilburn put us at the base of a nice little water fall with a deep pool below it. As soon as our canoes were in the water, fishing lures were flying in every direction as each of us eagerly anticipated just how good the fishing in this spot would be. We were not let down as the pool was full of walleye and the occasional pike. We certainly didn’t catch any monsters, the fish were on the small side, but we sure caught a lot of them. Before long the fishing started to slow down as every fish in the pool was probably spooked or had been hooked. Chet and I moved on into the larger part of Kilburn to look for a possible campsite. Mike and Chad were not far behind and had begun looking for a spot to camp also. To our surprise there was not another person to be seen on this lake that was alleged to be one of the more popular lakes. Before long we found a site that was a campsite at one time and decided to set up there. Finding enough ground space for three tents was a slight issue but we were able to find a couple flat spots off in the forest.

Our tent was situated by a little mound in the woods. Every time I came to get something from the tent a small greenish brown bird would take off from the mound. The second time I noticed it I decided to investigate and found a small hole in the ground with a nest of eggs.

I tried several times to get a picture of the bird on the nest by sneaking over the mound when I would come to the tent but I could never spot it. The bird’s natural camouflage blended in so well, I could only tell where it was sitting when it took off.

After we set up our camp and got the cooking area ready, we continued to fish and wait for the other guys to return with the paddle. They eventually arrived and had the other paddle. As it turned out, the other party the outfitter was waiting for wasn’t actually supposed to show till the next day. We started to wonder just how good this guy was and if he would actually be waiting for us when we were scheduled to be picked up. 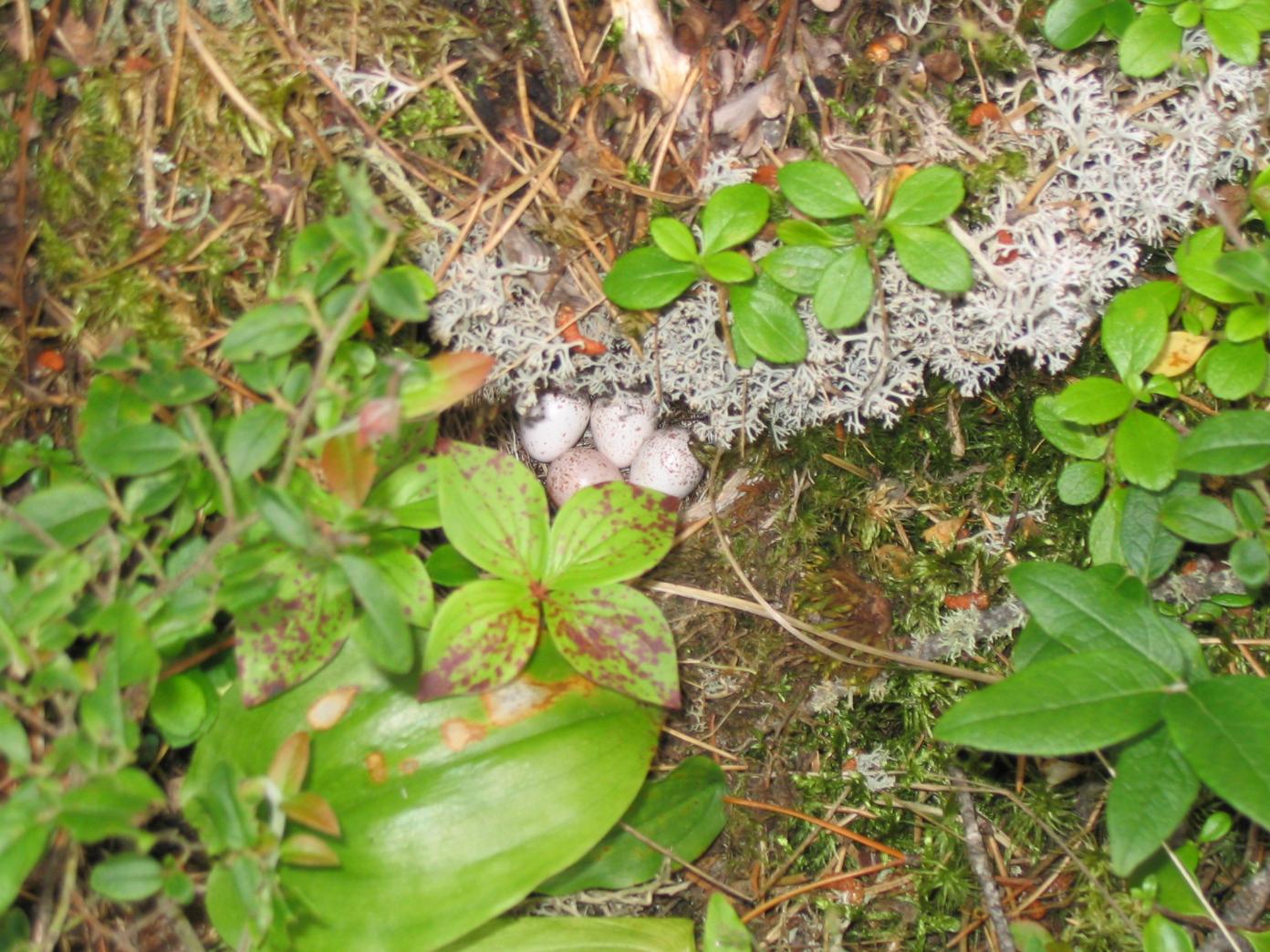