Trip Type: Snowshoeing
Entry Date: 02/22/2008
Entry & Exit Point: Lake One (EP 30)
Number of Days: 4
Group Size: 2
Day 2 of 4
Saturday, February 23, 2008 One of the more interesting ways of waking up is to have all that crystallized snow/frost all over from our breathing. One of the more uncomfortable tasks the we both went through that morning was putting on frozen boots...rock solid frozen boots...the laces were even hard to move! Wow, an experience I was not going to go through again if I didn't have to.

One neat thing though was that there were wolf tracks not 20 feet from our tent that were not there the night before! SO COOL!!!

Our feet were so cold that we actually contemplated packing up and staying in a hotel/motel and doing day trips. We have both suffered frostbite on our feet previously so our concerns were valid ones. We decided to walk around for awhile to see if we could warm up. We must have paced about a mile back and fourth along the lake. Eventually, we warmed and decided to stay. Neither one of us wanted to be the cowboy and 'gut' it out, so we made the decision together, which turned out to be the right one.

I had bought the "ICE-BOX" igloo maker at Midwest Mountaineering and we were very motivated to get going on this task as we did not want to sleep in the tent again. It never seems to fail that the one thing that would be of utmost importance to us once "in" -is forgotten back at the truck. The written instructions to the igloo maker! We had watched the how-to video and read the directions a few times, so we gave it our best effort. There are some important things to do right away in the start of making this shelter that we messed up on, so the angle wasn't right for us to get the top on. We secured a tarp on top and had a wonderful 1/2 igloo to sleep in, which was much more comfortable and warmer! 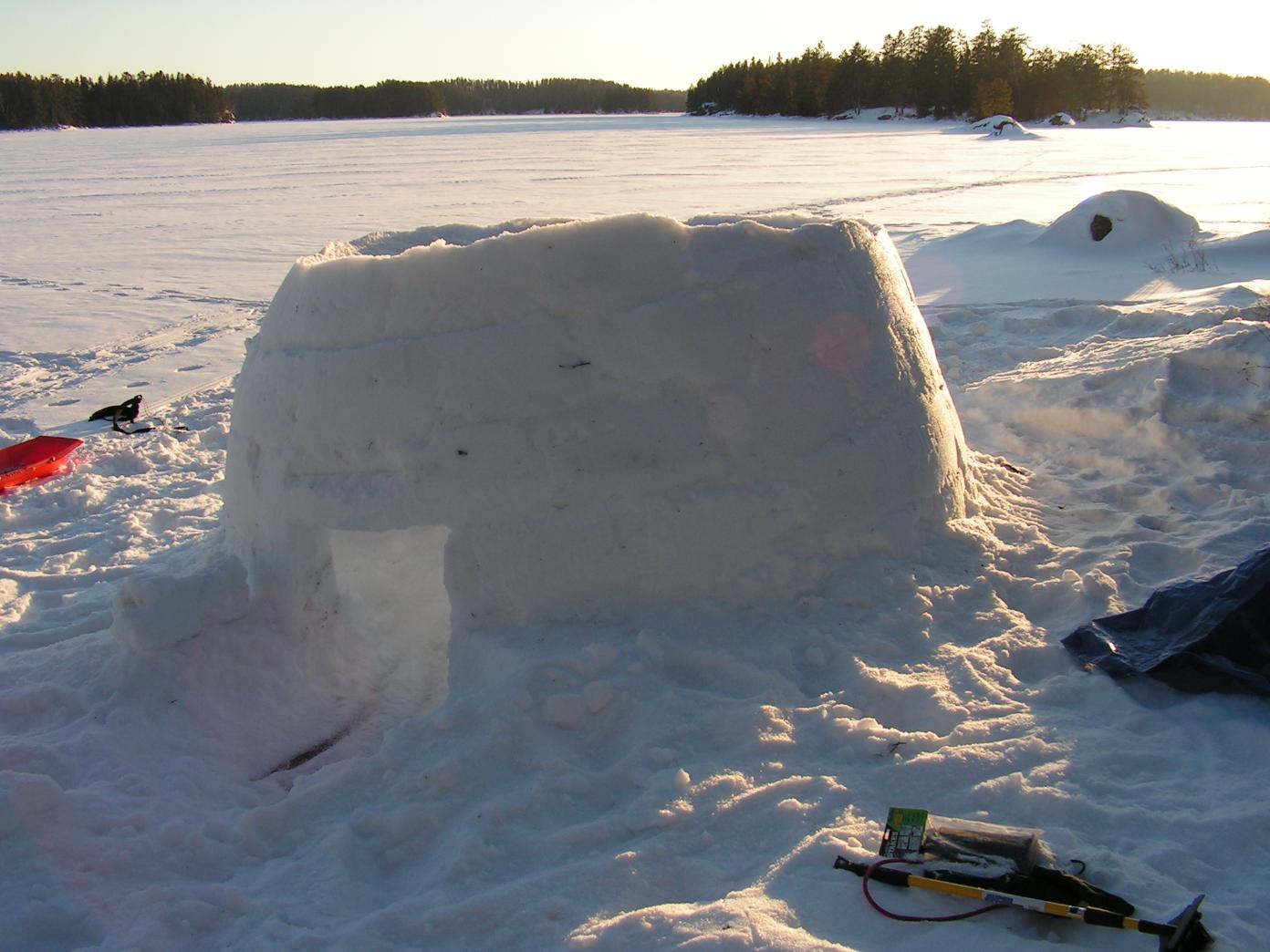 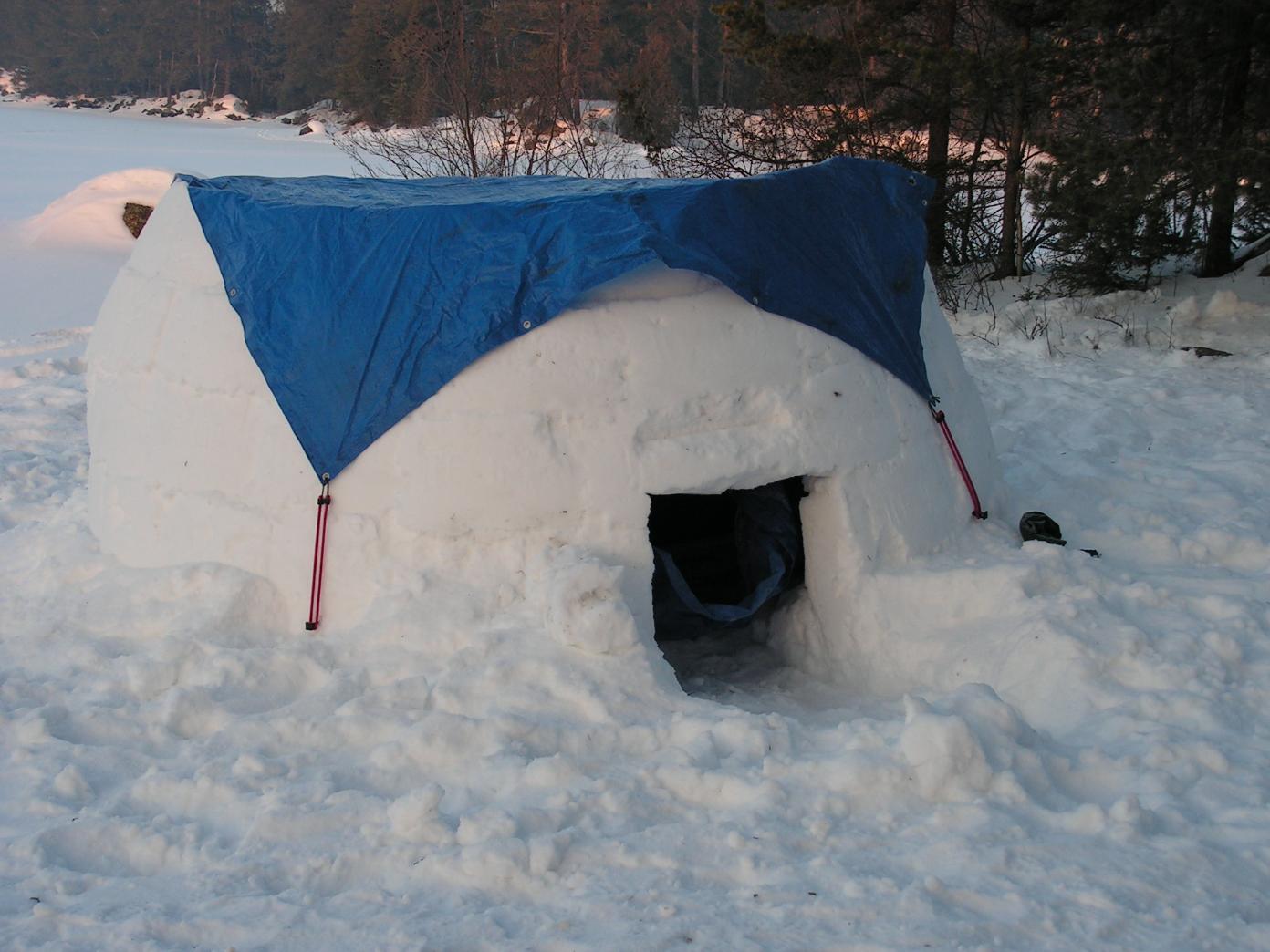 After this project was complete, we took off down the lake's shore looking for a good stash of dead wood and came upon the motherload! A big fallen over pine that produced wonderfully dry and ample wood for the three days and nights that we had fires. Another blessing from nature.

Before retiring for the night, we grilled up our New York Strips and spuds with some wonderful lake water and hot black chi'tea with chocolate for dessert. One thing is for sure, we were not going to go hungry. We didn't bring in a ton of food, but what we had served us well.

Our first night in our make shift igloo was great! We put one of our tarps on the ground, followed by our blue, closed cell pads and our ThermaRests. I forgot to mention that I had also brought along my video camera and had been taking video of various activities throughout the day. I was able to get some cool shots of my brother with the 'nightshot' lens of my camera that night in the igloo...kinda spooky, but funny as well. We were quite comfortable and once all zipped up, we were fast asleep.