Number of Permits per Day: 14
Elevation: 1324 feet
Latitude: 47.9527
Longitude: -91.7213
"This trip will be taking off from Fall Lake up through Newton Falls portage onto Pipestone Bay campsites. 3 day, 2 night trip into the wilderness.

The groups of guys I go with are all from Iowa and we usually use Latourell's as our outfitter and tow service. Every year for the last 7 years we've stayed at Latourell's and stayed in their yurt.

The groups of guys I go with are all from Iowa and we usually use Latourell's as our outfitter and tow service. in their yurt the night before our tow to Indian portage on Birch Lake. The mission of our trip was to go to the North Arm of Knife Lake, base camp and catch big fish. In 2008 it was a pretty late spring and the water was still pretty cold around 48 degrees in the main part of the lake. We were hoping this would make for decent laker fishing. The first day started out pretty rough raining with an east wind but by the time we got to Robbins island for lunch by that cool rock it was starting to clear off a bit.

We have a pretty tough bunch of guys and although we don’t travel light we like to hump it to camp so we can start our fishing. So we left Latourell’s at 6:30 a.m. and arrived at our campsite well up the north by 1:30 p.m. About 200 yards from camp we hooked into a decent laker, we hoped this was a good omen. 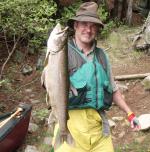 We got to camp set up pretty quickly and had our traditional chili meal for our first night along with some baked trout. On our trips we always have prizes for big fish or small fish or whatever we think warrants a prize. These prizes are usually some sort of apparel, this year it was a jumpsuit and some Hawaiian shirts.

We started to explore all the bays and found that the bays water temps had warmed to the 60’s and the smallies were close to there beds. We spent several afternoons throwing top waters and bobbers and leeches for smallies catching many that were 20 inches or better.

It seemed that the transition zone from the cold main lake water to the bays warm water was where the walleyes were. The walleyes were mainly in 12 to 14 feet of water and liked orange or brown jigs tipped with leeches. The northerns were all over with one particular bay holding many large Pike. This was one of the larger Pike and it was caught on 6 lb test with no leader.

The campsite we camped at was particularly beautiful. It didn’t have very good fishing but the landing was nice, there was plenty of room for tents and hammocks. It had a nice fire area with logs to sit on, and a great rock where we stored all of our booze, we called it the bar rock.

The bar rock came in quite useful since my 50th birthday occurred on this trip. The day after my birthday, since we weren’t feeling up to a long paddle we went to the narrows where the North Arm of Knife Lake goes into Little Knife Lake. This area turned into a very good walleye spot and the prize for walleyes was a nice orange and white flowered shirt.

This trip turned out to be another great fishing trip. The Lakers were in about 20 to 30 feet of water hitting deep diving tail dancers. The smallies were in the bays getting ready for spawning. Walleyes as mentioned before generally in 12 to 14 feet of water on jigs and in the evenings on floating jig head tipped with leeches on the bottom. Pike all over.

Finally after 7 days it was time to head out. On the trip out we had the worst wind we had all trip probably 25+ mph but luckily it was behind us but we pontooned the canoes just to be safe

With the wind at our back we made it across knife in about 2 hours, we made it through all 6 portages in about 2 more hours. We decided to walk our canoes through 4 of the 6 portages, the water was a little chilly but all went well. All in all another wonderful trip. We ate too much, we drank too much, we fished too much, but you can never have too much fun.