After years of going into the BWCA (at first with a rental then borrowing a canoe from a family friend) I finally broke down and bought a used Wenonah Kevlar Escape from an outfitter (Seagull Outfitters at the end of the Gunflint Trail). But, like all used canoes, it was in need of some basic repairs. There were no major problems with the boat; just over the years as a rental it had taken some abuse. Over the course of a weekend I completely overhauled the entire boat, from the gunnels down. This is a journal of what I did.

As you can see, the hull of the boat is pretty scratched up. Nothing deep (no major repairs were needed) but the hull was rough to the touch and desperately needed a sanding and refinishing.

I began by tapping and drilling out all of the rivets that hold the aluminum gunnels onto the boat. I did this because 50% of them were loose and would rattle a bit when you carried the boat around. I installed new rivets after the fiberglassing procedure.

With the rivets removed I was able to slide off the bow and stern plastic caps and take the yoke out of the canoe. Both would be refinished. You can see the gunk that built up over the years under the bow cap. A little acetone cleaned up all that very easily. The picture of the yoke is pre refinishing. I sanded it down to bare wood and revarnished it with three coats of Spar Varnish.

The aluminum gunnels were pinched on firmly but with a little bit of careful elbow grease I was able to slide it off of the Kevlar sidewalls. You can see some of the gunk on the sidewall where the yoke was attached. Again, acetone cleaned all that off.

I could have bought new end caps but, in order to save as much money as I could, I simply sanded the plastic with 150 grit sandpaper to get rid of all of the burs and other beat up spots then quickly hit the plastic with a torch to melt down the plastic. The final result is a nice, smooth finish that looks almost as good as new.

Now that all of the gunnels were off the boat it was time for me to start sanding. All of the sanding and fiberglass instruction comes directly from Wenonah Canoe (who I emailed and called many times to ask for instruction).

I began with a penknife by going around the canoe and finding any loose areas of old fiberglass resin (called alligator scales) and carefully pealing them up. Once satisfied with the removal of the scales I began sanding. I started with a 150-grit paper and sanded until the entire bottom of the canoe was smooth. Some places I did get into the Kevlar (which I assumed would happen) but I was not concerned because the 150-grit did not damage the weave (which Wenonah told me). It took me about 5-6 hours to complete the descaling and sanding for the boat. 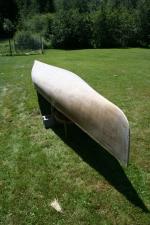 After I sanded I hit the boat with a wash of acetone to clean off the surface and prep it for the fiberglass resin. You will notice that most of the scratches are still visible but the surface was smooth as a baby’s bottom. 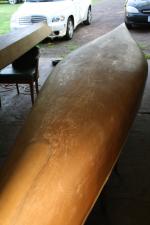 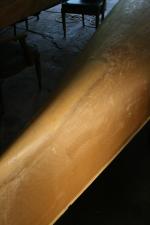 There are no photos of the fiberglass resin step because the set up time for the resin is only 10-15 minutes. I did not have the time to glass and snap photos so I will explain what I did.

Wenonah canoe (according to them via email and phone calls) is a fiberglass resin soaked Kevlar boat. In order to refinish the boat you can use any fiberglass resin as long as it is a two part (resin and hardener). Make sure you get Unsaturated Polyester Fiberglass Resin and a Methyl Ethyl Keytone Peroxide (MEKP) hardener. You can order Wenonah specific resin from Wenonah or you can just purchase it at Home Depot, Lowes, ect. I bought Bondo brand resin and hardener for this project.

Knowing the set up time I bought 64oz of resin (two small cans) and did small set-ups that were placed by my boat. Four containers of resin per side (eight in total) with a small cup of premeasured hardener set beside it. As I worked the resin would set and I would quickly switch to my next cup and continue on. It worked well but the final process left some tiger stripes because of my brush (the resin set the bristles of the brush before I finished the entire boat). If you are going to do this project for yourself I would suggest (which I will do next time I have to refiberglass a canoe) would be to pour the resin on the boat and move it into the place with a squeegee.

After letting the resin harden over night I went back and started the smooth sanding. I started with a 400 grit wet/dry paper and went over the boat to smooth out the little imperfections (tiger stripes) and basically get the boat super smooth. After the 400-grit step I went to a 600 grit polish sanding. That step made the hull glass smooth and it completed all of the sanding that I had to do.

I then, very carefully, slid the gunnels back onto the sidewalls of the boat. I labeled the bow and stern before I took it off so I knew which way to put it back on. Once I got the gunnels back on I placed in new rivets (3/16 size) and tightened them all down with a rivet gun. The sidewalls and gunnels are now tight as can be and no longer rattle.

Done! I did one more step of tossing on some rubbing compound (I did not need to but I did anyway) onto the hull to really buff it up. The final result is not “store new” but I am very pleased with out it turned out. It is amazing how much better it glides through the water now. I might have picked up 1/4 to 1/2 a mile per hour just from loosing all of the friction that the hull had on it prior to my refinish.

So there it is; BWCA sticker and all. If you are looking into doing this type of project but you think it is beyond your talents, don’t worry. This was really easy to complete. It is just time consuming. Now, get out there, buy a used Kevlar canoe, and refinish it for yourself.

Nice job - looks great! Thanks so much for sharing your experience with this. SR does recommend pouring the (epoxy) resin right on the canoe and using a foam roller to spread it around with a foam brush touchup following. But your approach worked just fine and I hope it's many years until you need to do it again :)

A much shorter version. I also just poured the resin on and used a roller to spread it out.

butthead what is the emblem on that canoe? Nice work with taping and paper...

Another hangout from time to time.
Quiet Journey
Thanks