I debated posting this photo slideshow on this site since the photos are somewhat off topic, but I see several other off topics posted.

On Friday I stopped at the landing at Gegoka Lake off Hwy One and saw a wolf running across the lake about 100 yards in front of me. Of course my camera was in my case and couldn’t get it out in time.

Great photos....thanks for sharing. My son and I took a winter ski trip to the BW about 10 years ago, your photos make me want to do it again...soon

Great photos! ! ! ! ! Makes me want to get out there too.
Print Top Bottom Previous Next
Beemer01
Moderator

"You're not serious about wearing sandals on this portage.... are you?"
Print Top Bottom Previous Next
izzy

Just finished a two hour snowshoe hike around the area behind my house in Northern WI.
My wife and I loved your pictures. I found the cabins with a quick search of Isabella. My wife is all for going.
Thanks for sharing. It is a beautiful winter!!

"Do Not Let What You Cannot Do Interfere With What You Can Do..." -John Wooden
Print Top Bottom Previous Next
woodpecker

"The way of the canoe is the way of the wilderness and of a freedom almost forgotten."---Sigurd F. Olson (The Singing Wilderness)
Print Top Bottom Previous Next
CIIcanoe

If you and your wife go up to Ron’s place tell him I said hello. Ron rents these small log cabins out year round and he also runs a log building school. He normally runs the log building courses year round but this summer/fall he fell off a ladder and had to have surgery on his right shoulder.

I met Ron back in 1980 when I worked for the US Forest Service out of Isabella. I always wanted to take one of his classes and finally 25 years later in 2005 I took two log building courses from him and in 2006 I took a rock course from him.

I really like the Isabella area and one reason is because of its remoteness. I should have bought property around there but instead I bought 45 acres in 1993 south of Grand Rapids since my father bought another 40 acres.

I hope to build a log home one of these days. I’ll post a couple pictures of my first practice building. In the fall/winter of 2004 I had about an acre cut for a food plot on my property. I had some Basswood bucked up at 100 inches. Instead of buying some pine I decided to practice with these trees. The structure is 53 inches inside. Too small to be a sauna or a shed so it will probably become an outhouse. For the amount of work I should have used longer trees to make a small cabin. Most of the work is in the notches.

Here is a couple pictures of my first project:

Awesome pics! I want to own a cabin like that one!

Would you please consider emailing me the picture of the cabin at night?
I would LOVE to use it as my desktop wallpaper!

e-mail with picture sent. I'm glad you like the photos.

Very nice pics! I like to ski too. Makes me wish I lived a little closer to the area. You can't see stuff like that around the Chicago suburbs. :(

Very nice with your little structure. Looks like big lincoln logs only nicer. Do you rent the truck for the day to do this? Seems like it could get expensive...


"Life is not about finding yourself. Life is about creating yourself." --- George Bernard Shaw
Print Top Bottom Previous Next
Buck47

"Do Not Let What You Cannot Do Interfere With What You Can Do..." -John Wooden
Print Top Bottom Previous Next
CIIcanoe

Yes, it can get expensive. Besides the chainsaw, generator,other hand log moving tools, other hand and electric tools there is the large Ford truck/knuckleboom loader and the Oliver tractor I bought. I also had to clear some land where I will eventually build the log shell prior to dismantling it and moving it to the actual site. I cut all the trees for the clearing but I had someone come in with a back hoe to dig up the tree roots and a dozer to level the red rock and class 5.

I bought my tractor in Iowa from “Mr. Oliver” Larry Harsin and I bought my knuckleboom loader in Prentice, Wisconsin.

I enjoyed your photos! Looks like you picked a great time to go up there with all that snow.

I would have been looking over my shoulder on that Windigo trail!

Chuck, props to you. Very impressive. You'll have to keep us updated when you build your cabin.

And then maybe throw a big housewarming party with your buds from the forum. :)

"Life is not about finding yourself. Life is about creating yourself." --- George Bernard Shaw
Print Top Bottom Previous Next
OmahaPaddler

Thank's Chuck, I enjoyed them.

"So much depends upon the red wheel barrow, glazed with rainwater, beside the white chickens." w.c.w.
Print Top Bottom Previous Next
Jay

Great pics, you are a talented photographer
Two quick questions

The thermometer....was that inside or out?

Is that how snow shoes go on....the pointed part toward the front?

I have never had them on.
Print Top Bottom Previous Next
CIIcanoe

The thermometer was reading the outside temperature in the morning.

This style of snowshoe is the Ojibwa style. Here is a little info and here's another photo of mine. 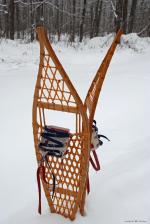 Here is another short slideshow. I took these photos on 12-29 and 12-30-07 while snowshoeing on my father's property and my property. My father has 40 acres and I have 45 acres near Grand Rapids, Minnesota. Most of my property is deciduous tress so there's not much character in winter compared to coniferous trees (at least to me), so I didn't include very many in this slideshow. That is one of the reasons I included some deer stands in the pictures instead of just trees.

I put this slideshow together to send to my father and step-mother. It's easier and quicker to put the photos in a slideshow to send them than sending individual pictures.

great pics... thanks for sharing your slideshow.
Print Top Bottom Previous Next