quote missmolly: "
Another time I was fishing below a waterfall when two women appeared. I was wearing Gore-tex, I had a carbon fiber paddle, and was sitting in a Kevlar Bell Rockstar. They were wearing garbage bags with three holes each for heads and arms and were paddling a dented aluminum canoe. I felt like such a wimp. "

This was from another thread and got me thinking about how we started. My first solo I had my Grumman tandem "Eagle" canoe, a boat cushion for a pfd, a duffle bag, backpacking pack, converse canvas high tops, cotton pants, cotton T-shirts and a woolrich plaid shirt. I wore a Sierra West rain poncho (which I still bring on trips today as a pack and wood cover).

I had a high tech 2 man Sierra West tent and had a black closed cell foam pad that rolled up. I used a 10 degree down bag that I still use (this past September) and had a Coleman peak one stove. I really don't remember what my food was like. Somewhere I think I have the journal. Most likely oatmeal and pancakes for sure. This was 1984.

These pics are from that first trip off the Gunflint. I demonstrate how to portage a duffle bag. I distinctly remember setting up that pic on the trail to show my family what portaging was. I also show the vehicle I used to get there (minus the hardtop). It was a 1979 Jeep Wrangler Renegade. 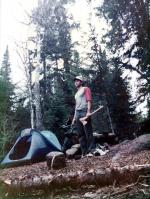 "Life is not about finding yourself. Life is about creating yourself." --- George Bernard Shaw
Print Top Bottom Previous Next
BlueSkiesWI

I feel spoiled, as I just started soloing last year. Rented a kevlar prism, had a bentshaft paddle, a nice 70 liter pack, paddling PFD, a trusty Coleman camp stove, zip off pants and a poly shirt, even brought the Helinox chairs with...

Of all the roads you take in life, make sure a few of them are dirt.
Print Top Bottom Previous Next
Alan Gage

Aluminum canoe. Wood paddle that was too big for me. An old canvas A frame tent my dad had from the 60's (this was the 90's) that I probably set up once in the backyard for practice. Cotton pants and shirt. Tennis shoes. Cooler full of food. About 15 books of paper matches. No cooking gear. Dull knife. No stove that I can remember. No sleeping pad. Cheap sleeping bag from the local department store. No rain gear. A couple fishing poles. And a dog.

I was 12 and my dad sent me out for the weekend to camp on the island of a local lake. We'd only been to the island once. That was the previous winter when we walked out on the ice. I'd never been camping before and of course it took longer than expected to get everything ready so by the time I pushed off from the dock the sun was setting. Got to the island and found it surrounded by thick cattails. Finally found an opening where I could land and can remember setting up the tent using a flashlight with bats flying over my head. Woke up the next morning and found the entire island crawling with baby toads.

Had a great weekend exploring and fishing. No houses on the lake and no one was out boating so I could convince myself I was alone in the wilderness. Dad came out to check on me the next day in his boat. Did the same thing a couple more times that summer. Good memories.

A 17' Michicraft canoe, a tent from JCP, an external frame pack from Sears and a 3lb cotton sleeping bag. And like you jeans, T-shirt, poncho and a seat cushion. Never confirmed the seat cushion actually floated and I doubt the canoe did if capsized because my brother left it on a beach one night and sand entered the bow. By the time I got enough counter weight in the stern that thing weighed about 120lb during a portage! Oh to be young, strong and stupid again.
Print Top Bottom Previous Next
TomT

On my first tandem trip to the BW I didn't have portage pads on my Grumman Eagle. I read that you could fasten two paddles length wise across the thwarts and use them as pads. The pain was so great I remember slamming the canoe down in disgust. Live and learn.

"Life is not about finding yourself. Life is about creating yourself." --- George Bernard Shaw
Print Top Bottom Previous Next
missmolly

My first tent was a tube tent. I actually had mosquito netting at each end that I'd tuck under the floor. I bought my first sleeping bag from a company in England. They had more choices than American companies. My canoe was an Alumacraft. My paddles were wooden straight shafts.

I will paddle eternal, Kevlar and carbon.
Print Top Bottom Previous Next
DanCooke

Waffle stompers? I had one of those shallow stainless Sierra cups. Drank right out of the lakes with it.

"Life is not about finding yourself. Life is about creating yourself." --- George Bernard Shaw
Print Top Bottom Previous Next
nctry

Canvas Duluth packs, a 9x9 kitchen fly I bought at united stores, a two man timberline, peak one stove, some Hodge podge cook kit some of which was mirro craft. I used an old town pathfinder i bought new for $300. I bought the formed wood yoke which I replaced early on with a Cliff Jacobson design i made myself. Blue jeans, cotton everything. Poncho. Aluminum/plastic paddle. Can't remember what I used for life jacket, but I'm sure it wouldn't have saved me even if I'd had worn it. Ha-ha.

Forty five years ago. Grumman canoe, canvas tent, no sleeping pad, cotton sleeping bag, paddles that were way too big and heavy. And my neighbors black lab pup.
First portage got between a mama bear and her two cubs with the lab barking up a storm. Had trouble sleeping that first night.
Print Top Bottom Previous Next
DanCooke

Waffle stompers were any of the big super heavy duty hiking boots- had to have bright laces- all the rage in the 70's. Vasque was the brand - melt snow seal in till they shone.

My first solo was in at Hog Creek in 1996. I paddled a 14'6" Wilderness Systems kayak with lots of SeaLine roll top waterproof bags I would load into a home made canvas and leather duluth style pack and large water resistant military duffle to portage. A three person Walrus and army sleeping bag, Peak stove with pots and pans collected from Goodwill type stores, steel hatchet, and lots of other heavy gear. It was triple portaging, but it got me out there and you all know the rest of that story.
Print Top Bottom Previous Next
ozarkpaddler

17' Lowe Line canoe back in the early '80's. When I was solo, I usually still paddled in the stern with gear in front. I would kneel in middle if things were "Hairy." Late '80's I was smarter and paddled solo from the bow seat of my Wenonah Adirondack.

"Let us live so that when we come to die even the undertaker will be sorry." Mark Twain
Print Top Bottom Previous Next
missmolly

My first solo canoe was a Discovery 174 that I paddled backwards from the bow seat. My first tent was a tube tent. My first reel was a closed face Zebco 606. My stuff sucked, but I was happy!

I will paddle eternal, Kevlar and carbon.
Print Top Bottom Previous Next
TomT

I wore high top canvas converse basketball shoes with no back up pair. I walked around camp barefoot a lot while my shoes dried out. Holy live and learn, Batman!
I truly was a dumbass.


"Life is not about finding yourself. Life is about creating yourself." --- George Bernard Shaw
Print Top Bottom Previous Next