the guy in the stern of the farthest canoe you met on leano might be ken storm.

i think the water level was higher in spring 09 than 08.

i'm wondering now if you were at the actual portage landing where you started the long bushwhack. in 08, while unused so far that season, the trail was unmistakable. a false trail was flagged on the left. if you had crossed where the trail climbed up onto the caribou ridge you would have taken a photo.

Wabakimi Project: Proud participant and contributor. http://wabakimi.org.- "Tell me once again what you plan to do with your one wild and precious life."
Reply    Reply with Quote    Print Top Bottom Previous Next
CIIcanoe

The guy in the stern of the far canoe did most of the talking.

This was what I saw when I approached the 550 m portage. There was a small cairn on top of the rock that you can see. I mentioned that these cairns were all different in construction than the cairns that I encountered elsewhere in the park.

The second photo shows the second cairn. It's on top of the rock to the right of the bow of my canoe in the distance at 12 o'clock. The canoe is pointing at 11. The direction is directly north. Not the direction I would want to continue in for any distance because the lake I needed to get to was to the west. 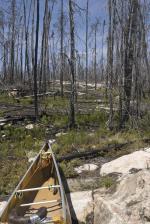 There's guy on myccr who knows Harry Stimson. He saw my trip report and e-mailed Harry. If Harry responds I will ask him specifically where he couldn't get through the blow downs and needed to call for a plane.

I'm Looking forward to our trip.

if we're talking about the same portage, that's not the landing. the landing starts on boggy wet ground and continues forward on what looks like a moose track and had some blowdown in 08. the track eventually bears left and you come to a rockface where you have to scramble up a goat trail to get on top of the ridge. it looks like someone tried to start a new portage trail that bypassed the wet section. the fact that the trail wasn't obvious speaks volumes about how little use the area gets. i didn't see another footprint out there in 08.

put up another photo of the guys in the canoes if you have one. that looks like his son in the bow and he was from the dakotas-there was a dakota plate in the lot.

i need a photography lesson.

Wabakimi Project: Proud participant and contributor. http://wabakimi.org.- "Tell me once again what you plan to do with your one wild and precious life."
Reply    Reply with Quote    Print Top Bottom Previous Next
CIIcanoe

Looks like a good thing I didn't continue my intended route. Who knows I might still be walking through the burn with my canoe on my shoulders thinking the portages were going to end sometime soon, but never do!!!! This guy just got back and he covered the same portages that I would have covered on day 6 of my planned trip.

Thanks for the post and report. My group just returned (I arrived home yesterday about noon) from a trip over much of the same ground. Consider yourself lucky that you didn't head up to Adventure lake and try to make it via Haven/Gulch/Jigsaw to Wrist Lake. The Jigsaw portages, over which a portion of our group traversed, was burned out and mostly resembled "pick-up-sticks" over the portage trail. The portage time from Gulch to Wrist ran in excess of 6 hours of pulling canoes and packs over a "thatch" of logs. We did run into a portage clearing crew on our way out and alerted them to the need to "re-open" the route. I assume they will schedule clearing that area in the reasonably near future.

When I spoke (e-mailed) Claire she said there have been two different crews to the 550 m portage. I do believe that someone has started two different beginnings of this portage maybe not realizing there was another beginning else where.

I believe the same thing happened at the next 100 meter portage. I wrote in my report that the first two cairns I saw appeared to be in conflict with one another.

These are the only two photos I took of them

something must have happened on both of those portages. they weren't easy, but there was no question on the trail location.

the QJ report doesn't surprise me. just travel through the boreal. the thing to remember is that can happen in just one storm. without proper gear, you have trouble moving forward or backward. that's why we're bringing two saws.

the area he's talking about is in the burn. the north half of wrist is out of it, as well as adventure and west. despite the warning, i'd go out there again. i could be wrong, but i think that's ken and his son. they base camp on mexican hat. now that would be a coincidence. now here's another coincidence. the first post on your QJ thread was by dentondoc. i met him on our quetico trip in the spring of 08.

Wabakimi Project: Proud participant and contributor. http://wabakimi.org.- "Tell me once again what you plan to do with your one wild and precious life."
Reply    Reply with Quote    Print Top Bottom Previous Next
Ho Ho

I'm enjoying the report, Chuck. Lots of detail so I haven't finished reading, but I scanned all the pics. I think I have to head that way. I'd miss the White and Norway Pines but love the relative solitude in the boreal zone.
Reply    Reply with Quote    Print Top Bottom Previous Next
CIIcanoe

The park is somewhat more challenging than Quetico and definitely more so than the BWCA. Just getting to the park can be a challenge.

You have to actually look for some of the portages compared to seeing them half way across a lake in the other two mentioned parks. Some of them you can’t see them until you are on top of them and sometimes even then they aren’t obvious, especially the further west you go. There are other challenges, also.

I missed the White and Red Pines at first (still do), but the boreal forest has a unique feel all its own that I’ve come to enjoy. There is the solitude in traveling this park and Wabakimi compared to Quetico and the BWCA.

It was funny I was walking with my head down along a tough portage on this trip and I saw a larger tree out of my peripheral vision. After walking a ways I said to myself, was that a Red Pine? I never did go back and check.

Bill, I think you would enjoy the challenges the boreal forest has to offer.

Thanks for reading my report. Maybe our paths will cross up there like in Quetico a couple years ago paddling in the high seas.

Outstanding trip report - and photos. Thanks for taking us along on your journey.

Do not let the behavior of others destroy your inner peace. Dalai Lama
Reply    Reply with Quote    Print Top Bottom Previous Next
CIIcanoe

I'm glad you enjoyed the trip report and photos.

Thanks, Dick. I hope your summer is going well.

Sure do miss the north country. Hope be be able to do it again some day