A Trip to the South Arm of Knife Lake
by snakecharmer

Trip Type: Paddling Canoe
Entry Date: 05/31/2008
Entry & Exit Point: Moose Lake (EP 25)
Number of Days: 8
Group Size: 2
Trip Introduction:
The planning for this trip went through several twists and turns. It actually started as a Quetico adventure to the Brent Lake area, but that trip had to be postponed until next year. It evolved into a south of the border trip to the Knife Lake area. Then two fixtures of our 4-man core group had to bow out for health and personal reasons. This left just my brother, Mike, and I. We had never tripped, just the two of us. And I had never planned a week long trip from top to bottom. That had always been left to the professionals :-) But in the end we decided that the show must go on.
Day 1 of 8
Saturday, May 31, 2008

We arrived in Ely at 4am after making the 4-hour drive from my north metro home. While catching a cat nap along one of the town's quiet side streets, I was suddenly awakened by a shadowy figure staggering past my window. It was a young man, probably in his mid twenties. After glancing off a wall, he crossed the street, bounced off a hedge and disappeared around a corner. The gentleman had either been over-served, or was sleepwalking. At any rate, his timing could not have been better. Who needs an alarm clock? It was just after 5am. We stopped in at Voyager North Outfitters, picked up our permit and purchased some bait. Friendly folks at VNO! After Mike had watched "the video" (his punishment for staying home last year), we were off to Williams & Hall Outfitters on Moose Lake for our tow. After arriving, we unloaded the truck and carried the canoe and our packs down to the loading docks. It was still a little early, so we spent some time on the beautiful log deck of the lodge overlooking Moose Lake. Around 7am, the manager came out to meet us and arranged to put us on the first tow out. The tow boat operator secured the canoe to the boat's rack while we loaded up our packs. Soon we were motoring across Moose, then Newfound and finally Sucker Lake. We pulled into the Birch Lake portage at 8:15am. After unloading the tow boat, we crossed the short portage to Birch and put in. Travelling northeast, we made our way through Carp, Melon and Seed Lakes, finally reaching Knife at 11:15am. We stopped for a photo of the "Rainbow Rock" and paddled around Isle of the Pines. After having lunch at a campsite on the south shore, we continued east to the middle of the South Arm. Much of the central South Arm appeared to have suffered blowdown in the 1999 storm and more recently had been burned. We arrived at our target campsite nearest the 130 rod portage to Sema at 2pm. It was a great site - flat, spacious and even had a sandy beach out front. This would be home for the next two nights. After setting up, we headed out for some fishing just south of our campsite around some small islands. But we had only limited success, picking up a pike and a whitefish. We headed back to camp for some dinner. Venison brats were on the menu. They were roasted on sticks over an open fire. We enjoyed the campfire and pleasant weather before retiring to the tent for the evening. We were beat. The push in and lack of sleep had finally caught up to us. 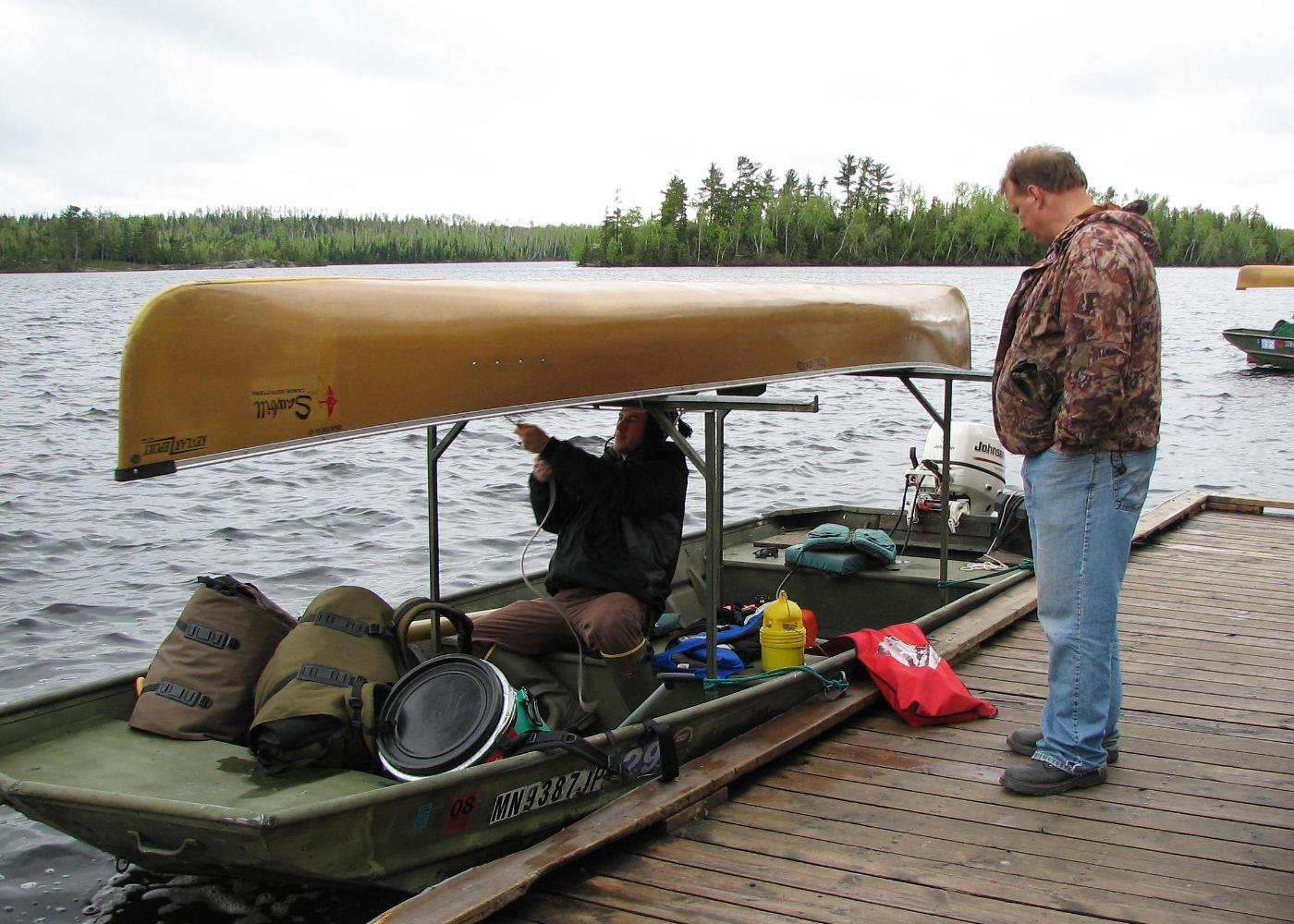 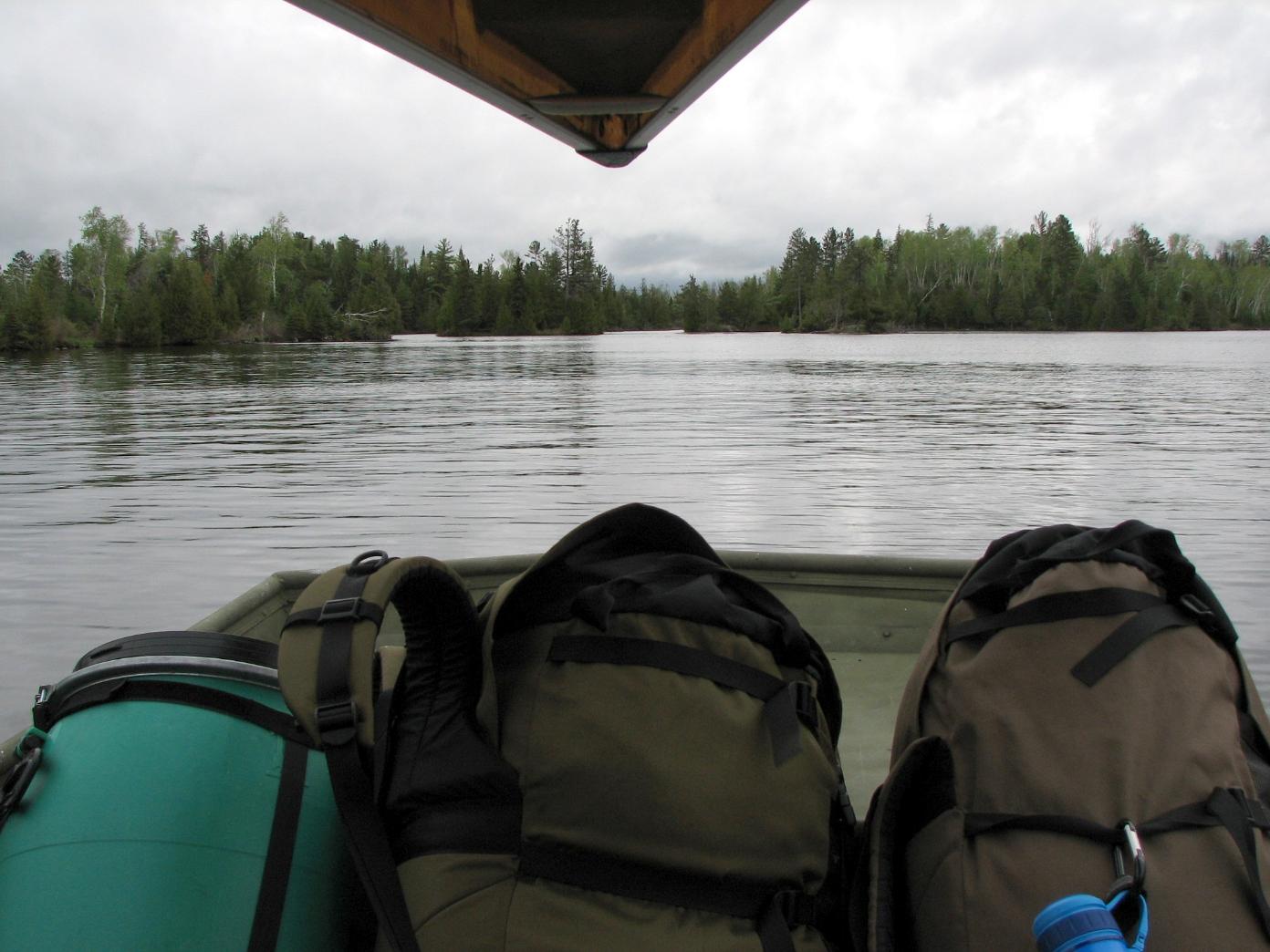 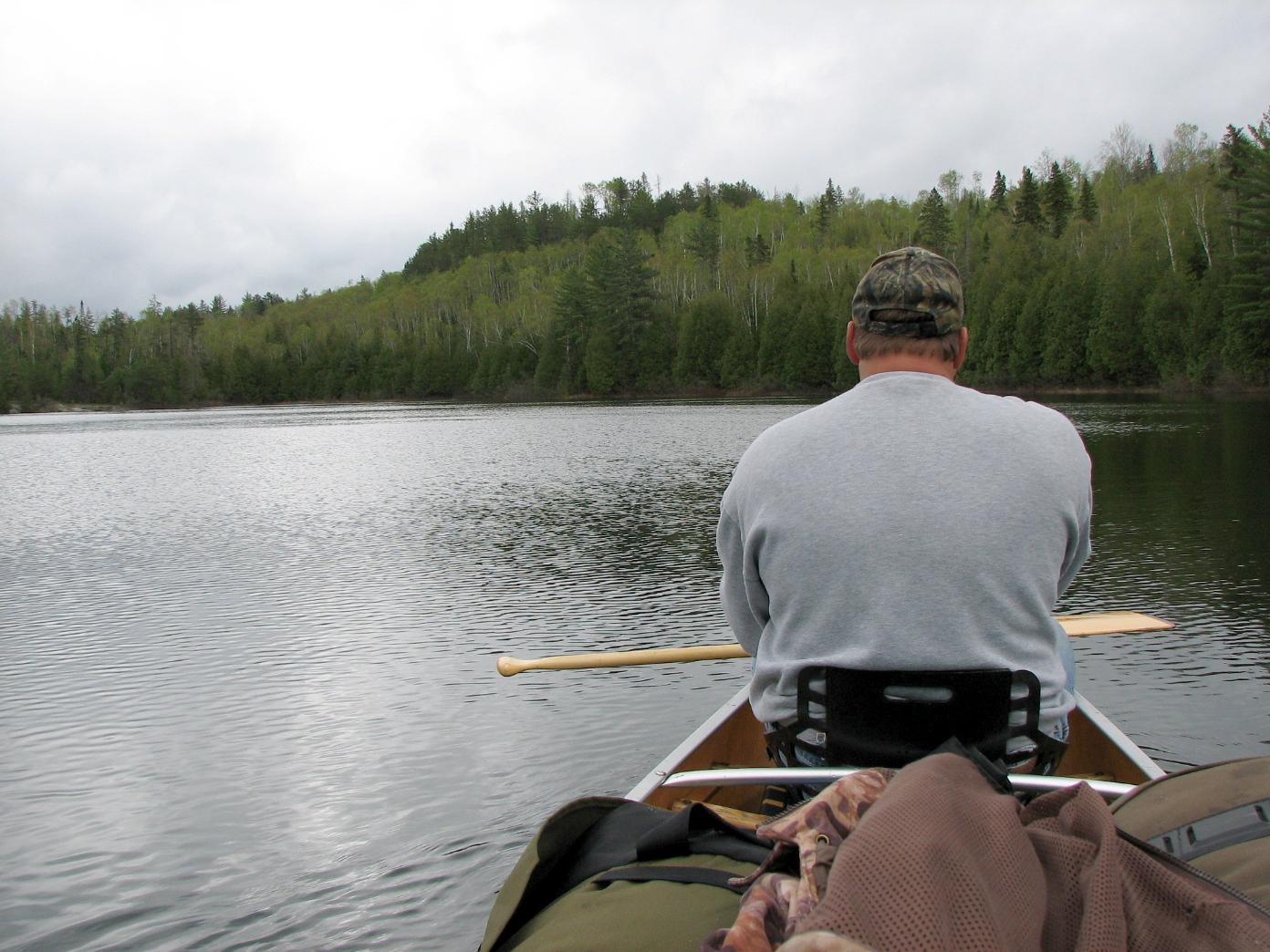 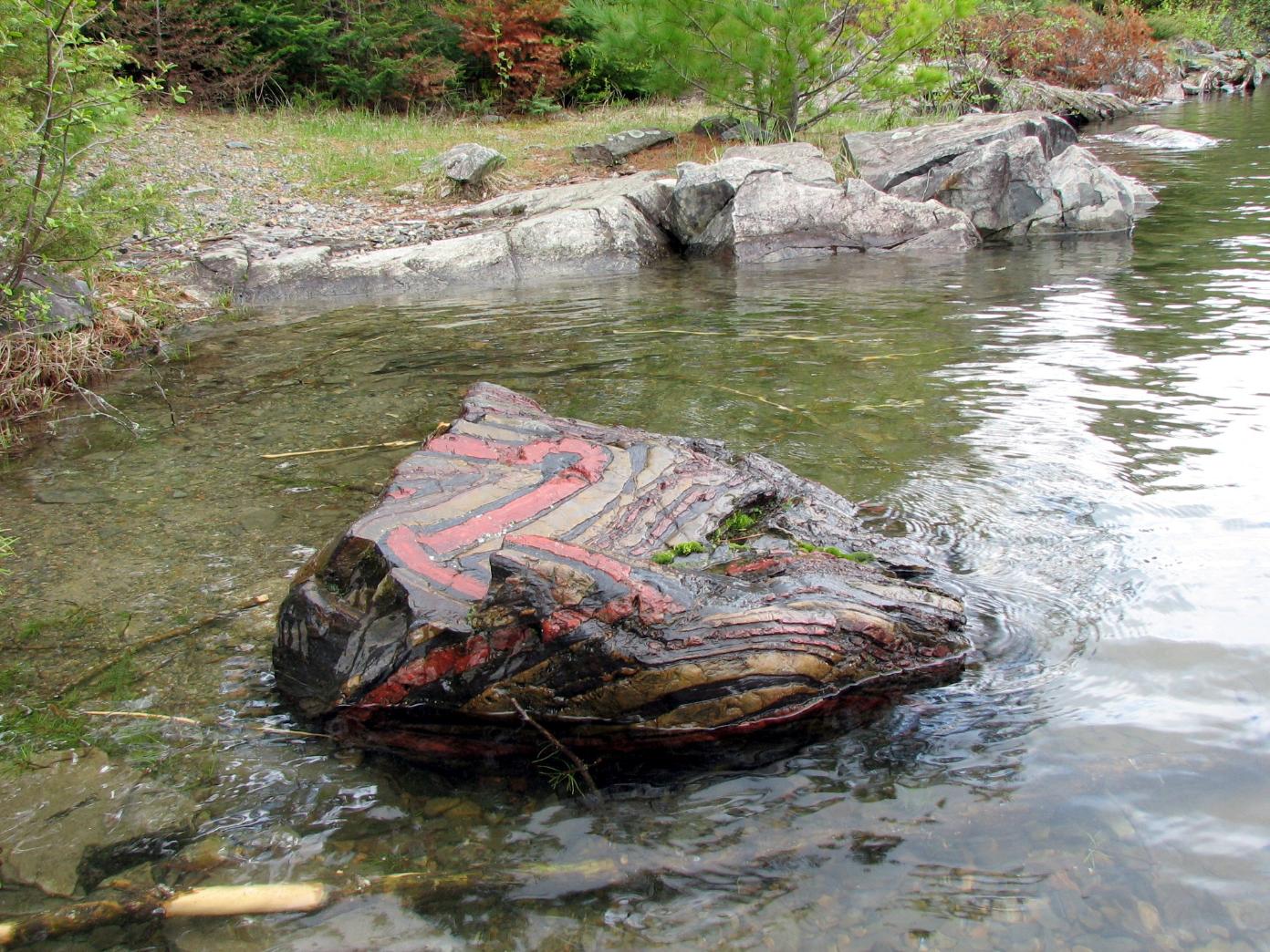 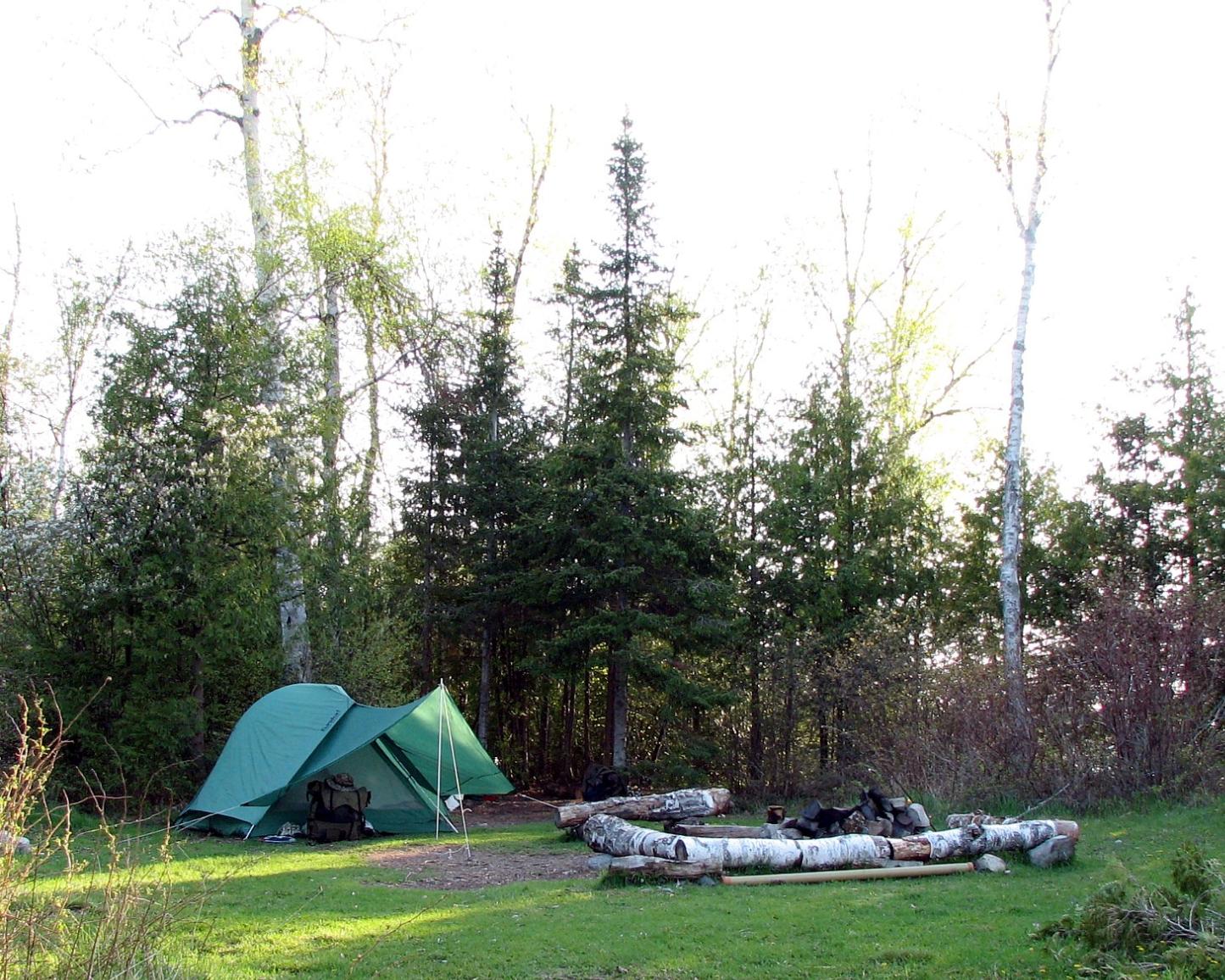