Pauness Lakes to Heritage, Lynx, to Shell, loop
by woodpecker

Trip Type: Paddling Canoe
Entry Date: 06/07/2009
Entry & Exit Point: Little Indian Sioux River (north) (EP 14)
Number of Days: 6
Group Size: 3
Trip Introduction:
Figuring on the time of year to make our trip was decided while celebrating our family Christmas last December. We all thought that early June would be a chance for big fish... After talking to an acquaintance on fishing for big pike it was entry 14 , the Little Indian Sioux River and Heritage Lake that were on our minds..... Saturday June 6, was travel day. Nick and I drove up to Ely, leaving Iowa at around 8:00 AM. Stopping in Owatonna at Cabelas and for gas, we pulled into Ely a little before 4:00 PM and had just talked to John and Lynn at VNO when Adam called and said he had pulled into town from Milwaukee... We spent the evening getting our permit and licenses, shopping and eating before turning in at the bunkhouse above VNO.
Discuss Trip: View Discussion Thread (14 messages)
Day 1 of 6
Sunday, June 07, 2009

Waking to cloudy skies and having loaded the canoe the night before, we picked up our leeches and decided to stop for coffee and donuts instead of eating breakfast. We headed East out town and to the Echo Trail and about 50 minutes later arrived at the Little Indian Sioux entry 14 parking lot. The lot was pretty full but we found a place to park the Tundra, 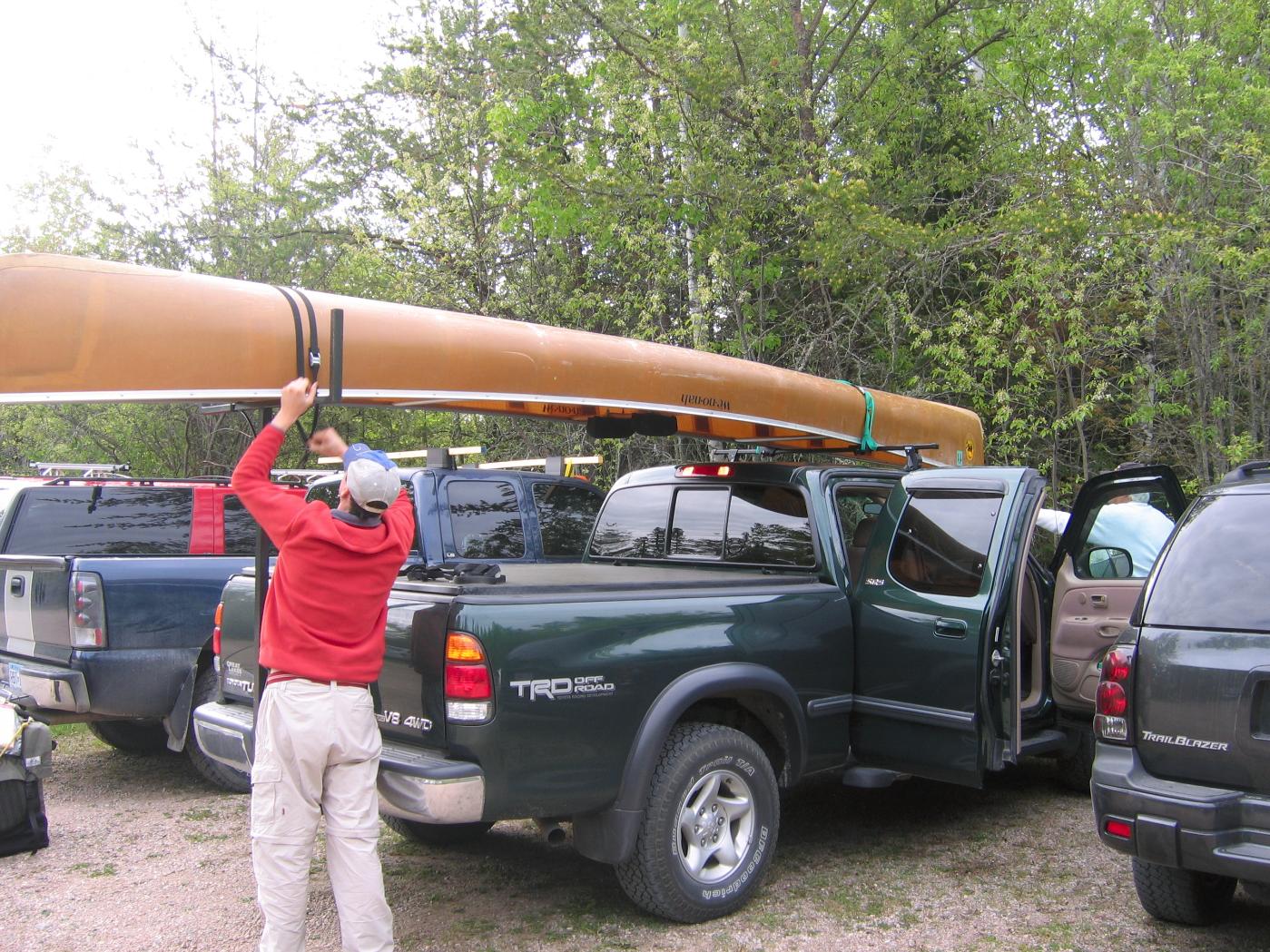 unloaded..and headed to the starting point. The Little Indian Sioux was wider than we expected and had quite a bit of beaver activity. We saw several beaver and at one point we encountered a dam almost across the width with a narrow passage on the right side. Our first portage ran along rapids for 60rds. and ended with a small waterfall and once again into the river. The river opens into Upper Pauness and a short paddle across this lake brought us to the 40 rd portage into Lower Pauness where we paddled towards the North end of the lake to view the Devil’s Cascade, a real cool gorge cut by rapids and having a vertical drop of about 75 ft. along its course… 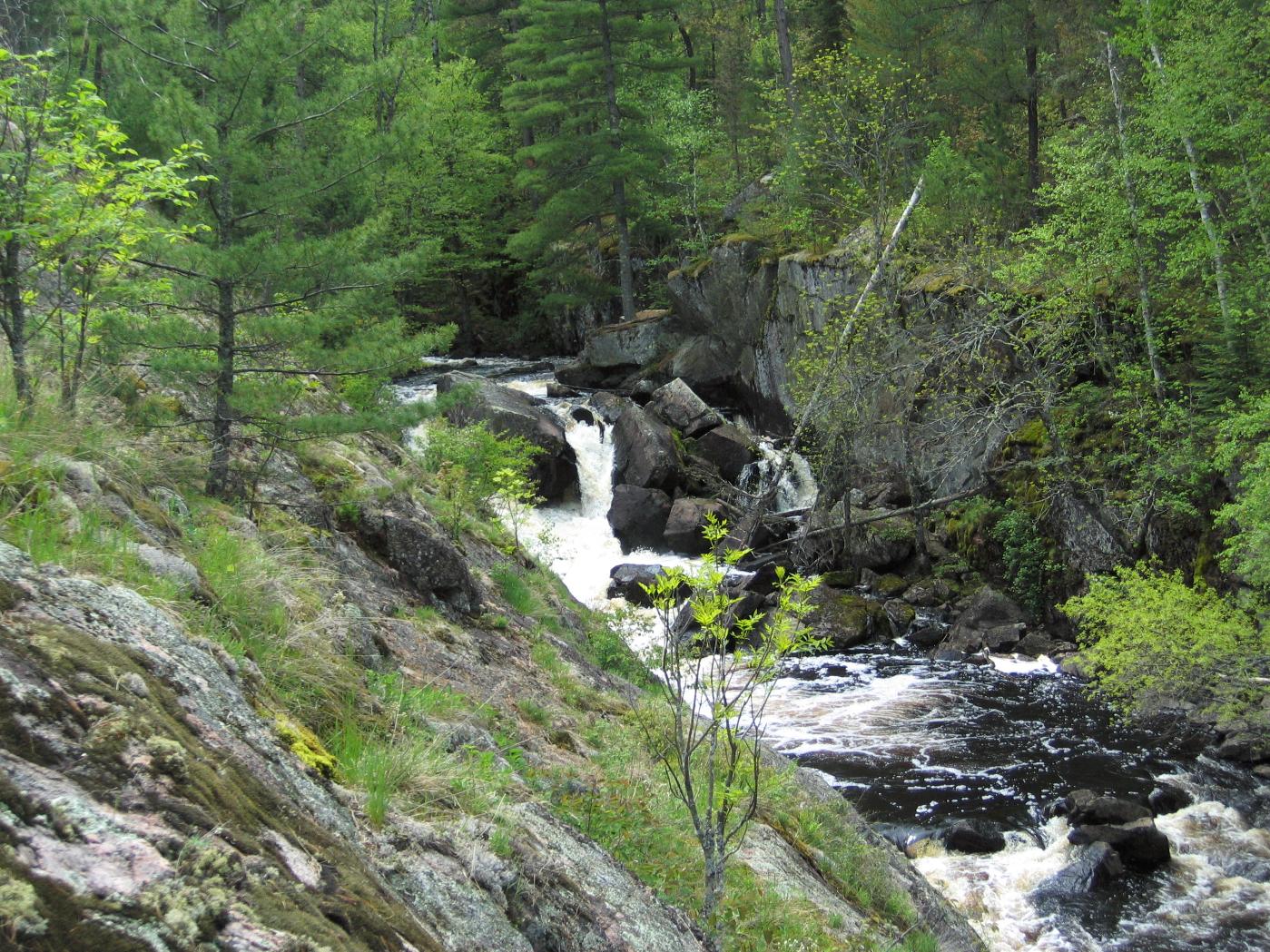 From the sightseeing of the cascade we continued to paddle towards Shell Lake and the 216 rd portage into Shell.. This portage started out steep but leveled off and then surprised us with a short boardwalk and six inches of water over the boards for about 30 ft…The boards kind of sank down as you would walk on them…but not quite to the tops of our boots.. we could see that beaver had dammed up a waterway and formed their own little pond there. A little farther and we came to Shell entrance, a muddy bog to launch from….after throwing down a few logs, we loaded and proceeded thru Shell and then on to Heritage… This portage wasn’t long but the end into Heritage was too shallow for our MN III and its load of gear and three people….We ended up taking our boots off and walking the canoe through the rocky entrance until we could clear the rocks. Heritage lake is a long narrow lake with two campsites... the first one being occupied, we headed North to the remaining one…the one we'd hoped for.

This was our camp for the next two nights. We cooked up some real mean ribeyes and potatoes complete with Budweiser or supper. 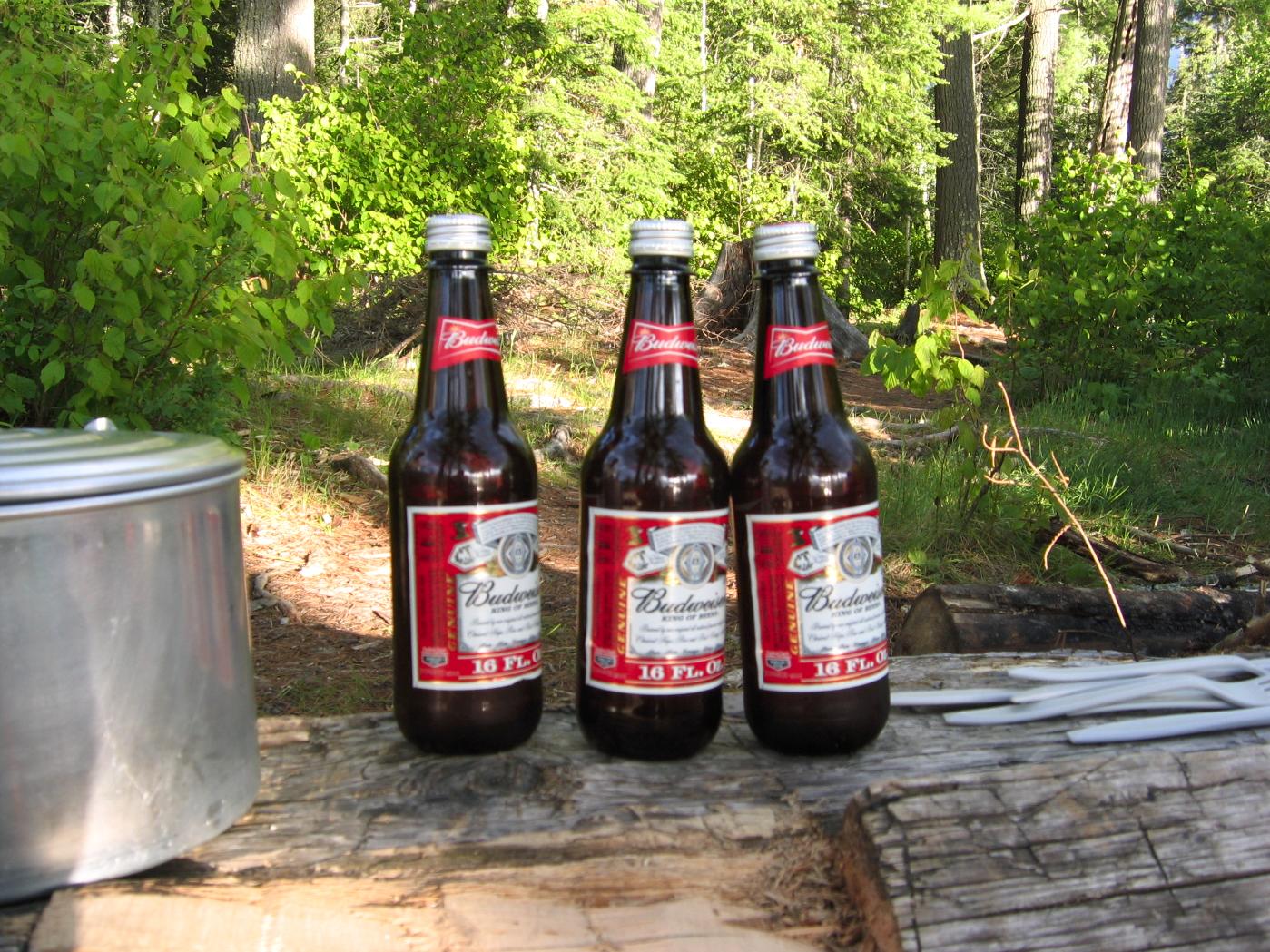 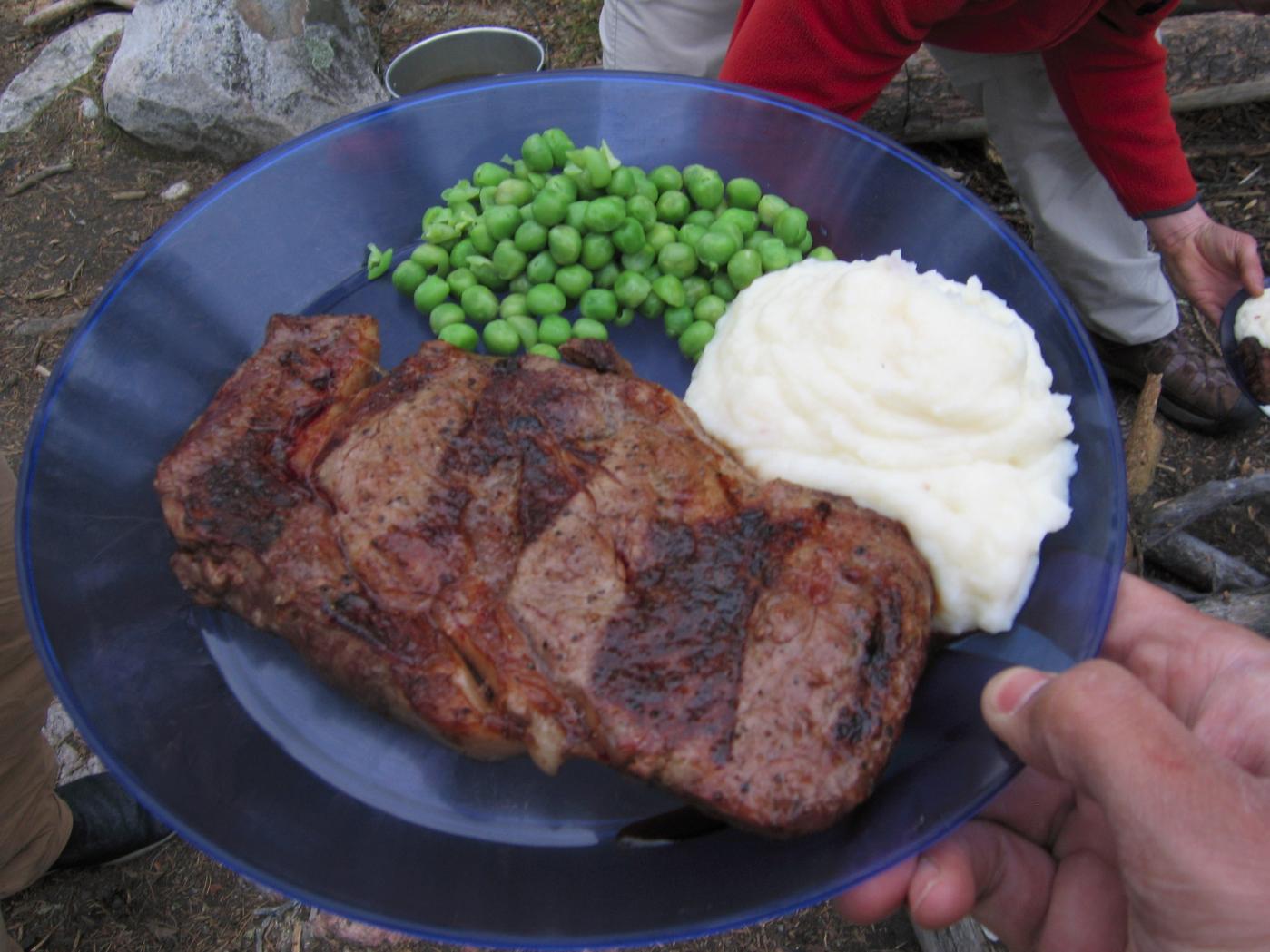 The first day ended with a very memorable sighting of two moose, a cow and a yearling, swimming across the lake in front of our camp..