Trip Type: Paddling Canoe
Entry Date: 06/28/2009
Entry Point: Little Isabella River (EP 75)
Exit Point: Snake River (EP 84)
Number of Days: 2
Group Size: 1
Trip Introduction:
My goal for this trip was to get away, try some new gear including my new (to me) solo and try to catch some fish. Focus was on lightweight. Little extra gear. Single-portaging. This would be my fourth permit of the year.
Discuss Trip: View Discussion Thread (12 messages)
Part 1 of 3
Sunday, June 28, 2009

My original plan was to spend two nights alone in the BWCA but my girlfriend's flight home got delayed so I only had one night. Looking at the weather forecast I knew I was in for some serious wind and possibly some showers. I planned my route accordingly selecting small rivers sheltered from the wind.

Driving north I left the beautiful weather around the Twin Cities and entered the seemingly perpetually gloomy SNF as per my usual trip. The rain started somewhere north of Two Harbors. When I showed up at the Isabella Work Station about noon the help was definitely surprised to see me. She wasn't expecting another party until Thursday July 2nd and I was only her second walk up of the YEAR! In fact she had a hard time figuring out the reservation system because she so rarely had to use it. Fortunately I had my "get-out-of-the-movie-free-card." It still was almost a 45 minute stop. But I was still in good spirits.

I drove up to the Little Isabella River entry point and started on my way. I single tripped throughout this trip. My gear all fit in a Granite Gear Vapor Trail hiking pack and GG thwart bag. I lashed my two paddles (why do I even bring 2? The ZRE never leaves my hands) and one fishing rod into the boat. I was paddling my new (to me) Bell CJ Solo. Long story short this is my second CJ Solo and I love the boat. And my girlfriend let me keep this one! I built a yoke that attaches to the seat that worked awesome.

I was dressed for war. Full rain gear. Water shoes. Headnet for the fierce skeeters. DEET.

I rigged up my fishing rod and managed one walleye (fishing pool below rapids) en route to my campsite on the Isabella River-just north of the 8 rod portage. I turned her loose not really interested in cleaning fish tonight and it was approaching 6pm.

The campsite (just north of the 8 rod portage along the river) was pretty nondescript. Not very big but a couple decent tent pads albeit in close proximity to the fire ring. Overall a small campsite.

I hung my Warbonnet Superfly tarp and Blackbird hammock beneath it. The superfly provided plenty of room for gear, cooking and generally getting out of the rain/drizzle.

After a quick dinner of Mountain House Chili Mac (my first time and it was great) I paddled downstream to the nearby rapids/swift water to fish. You can easily paddle this swift going downstream avoiding the 8 rod portage but no way you're paddling up it. No rocks or major obstacles to avoid. I parked my boat out of the way at the upstream landing and walked to the landing beneath the fast water. No sign of company so I started casting. I landed 4 more nice eater walleye between 14 and 20" all of which were released-seemingly no worse for the wear. It had been raining for the better part of my 8 hours out so I decided to head back to my shelter and dry out. Drank too much Jim Beam and fell asleep before the heebie jeebies got to me. 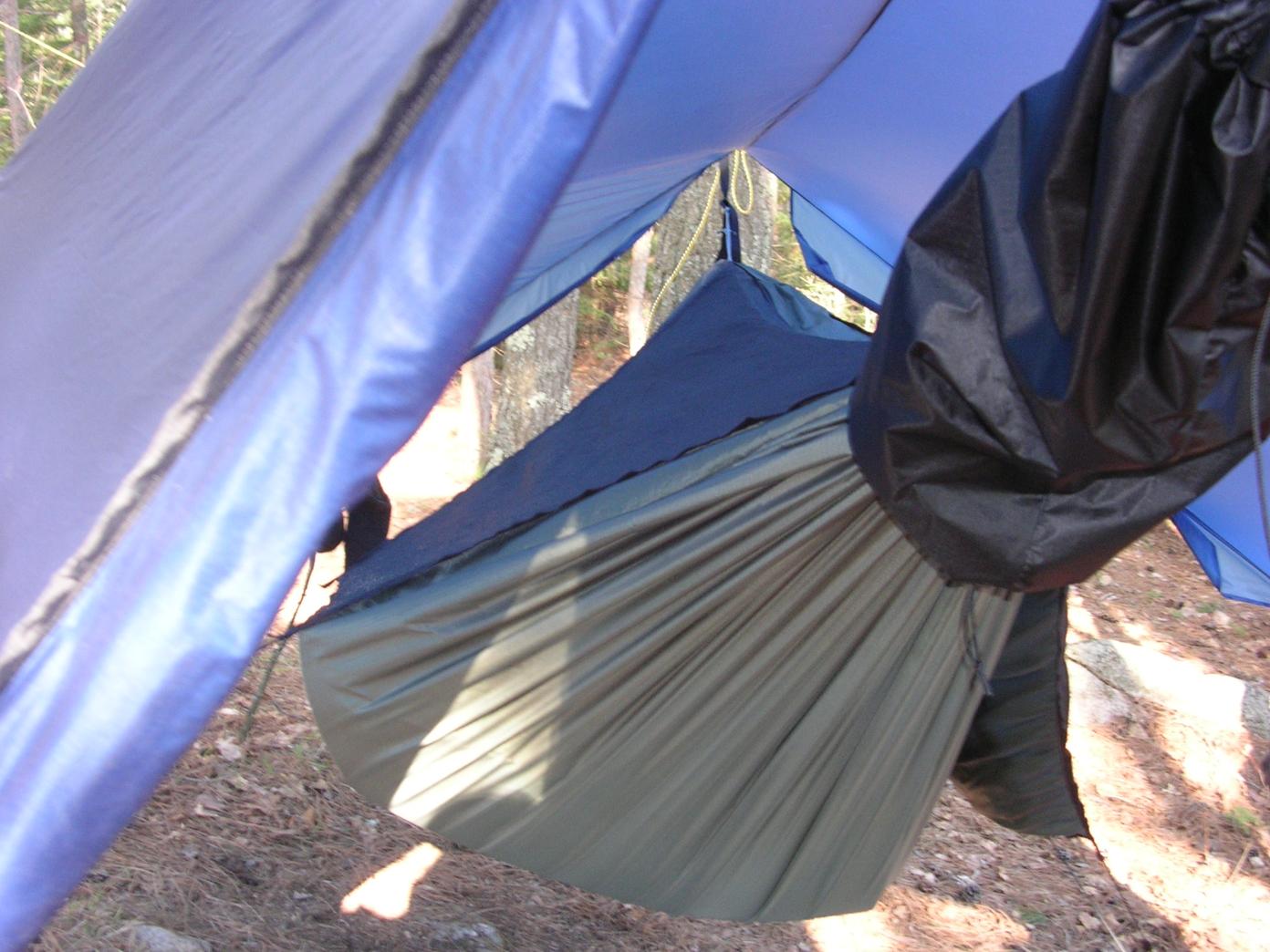 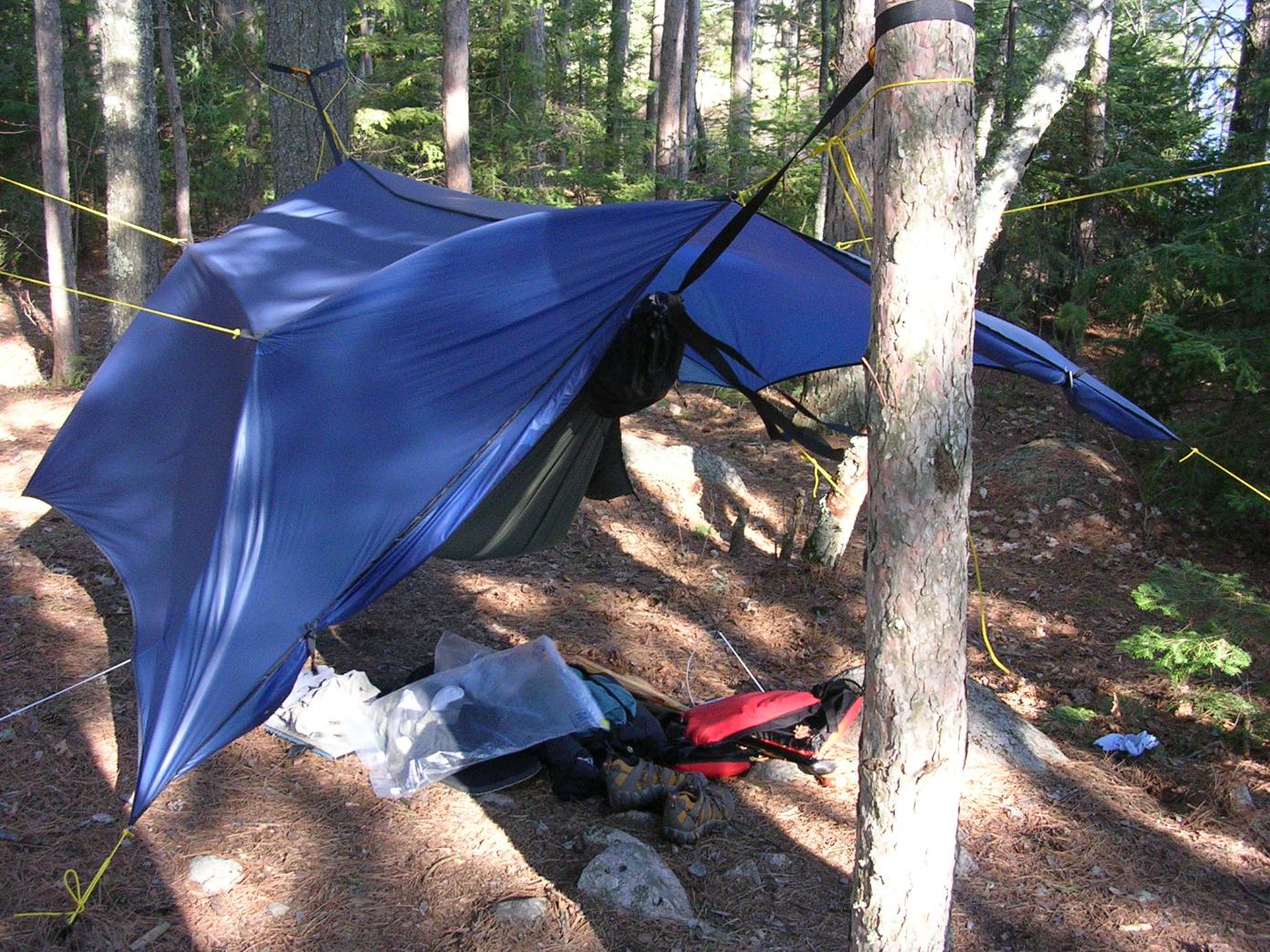 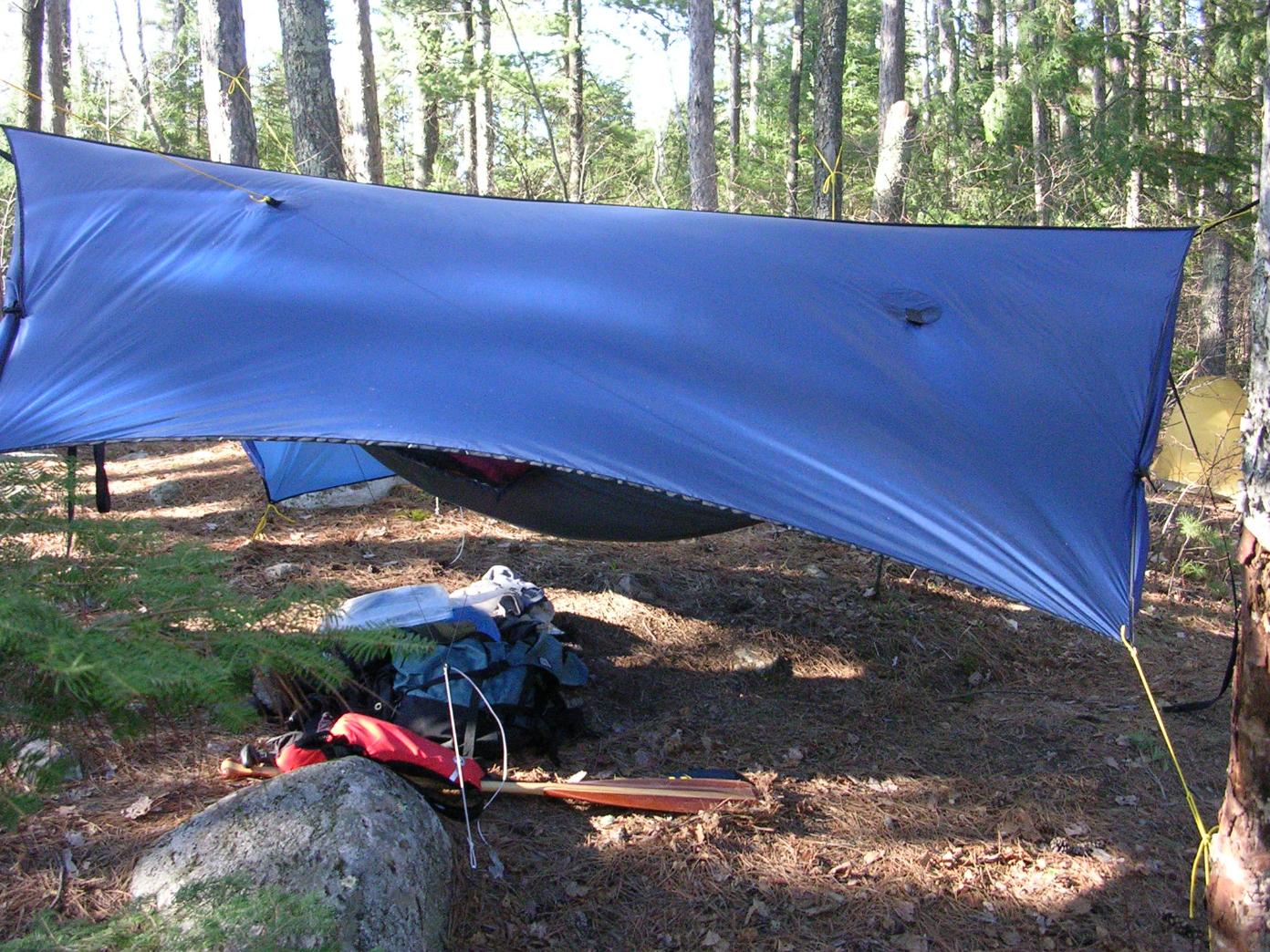