Trip Type: Paddling Canoe
Entry Date: 06/26/2009
Entry & Exit Point: Quetico
Number of Days: 5
Group Size: 2
Trip Introduction:
After last year's rough weather Man Chain trip with my son (http://www.bwca.com/index.cfm?fuseaction=trip.report_view&sel_trp_id=1133), we returned this summer to Quetico to try our luck again at the weather and fishing. This year we did a base camping trip to allow us more time for fishing. (FYI - other title candidates for this report were: "Five Days With My Son Without Sun" and "The Coldest Winter I Ever Spent was This Summer in Quetico". More on this later.)
Discuss Trip: View Discussion Thread (12 messages)
Report
June 26
Just like last year, we flew from Houston into Duluth and rented a car for the trip up north along Lake Superior to Grand Marais and then up the Gunflint Trial. Along the Gunflint Trail, we stopped at Trail Center (http://www.trailcenterlodge.com/index.html) for a tasty fish fry and frosty malt. Jared was brave and ordered the combination peanut butter and maple syrup malt, which was delicious. The waitress, Sue, again appeared overworked but was very entertaining. The weather was perfect (sunshine and 80 degrees) and the bugs were not nearly as bad as last year (fair number of mosquitoes, few black flies). Upon leaving Trail Center, we saw a female moose and her two young calves. 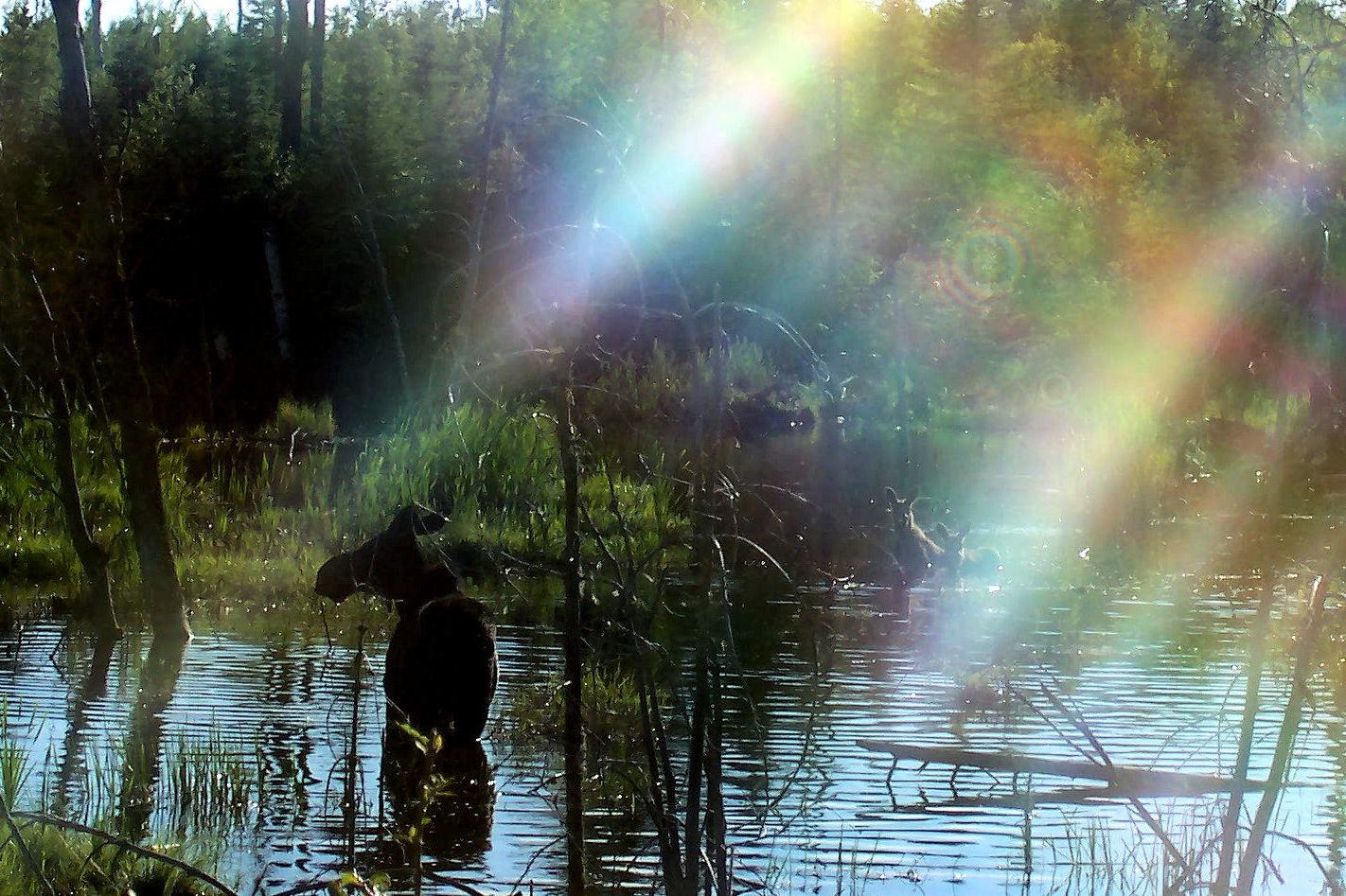 Once we arrived at our destination, Seagull Outfitters (http://www.seagulloutfitters.com/default.htm), they again did an excellent job of orientation and route planning. Deb runs a first class operation. Our planned route was to base camp at Saganagons at an unmarked site near Boundary Point which was recently recommended by a previous party. 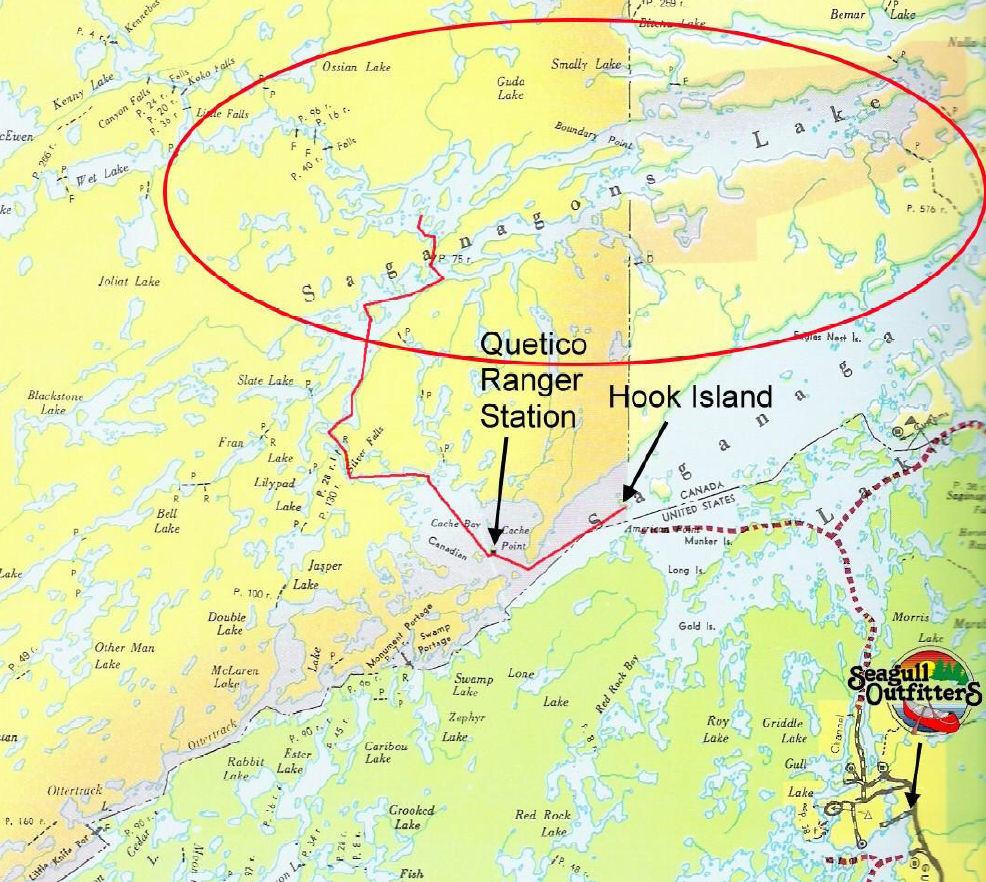 We choose the location primarily because it provided shelter in most directions, especially from the west. This is in response to our episode last year where we were basically windbound for 2 days on Other Man Lake. The weather forecast called for a cold front to be moving in late the next day and we didn’t want to be windbound again. 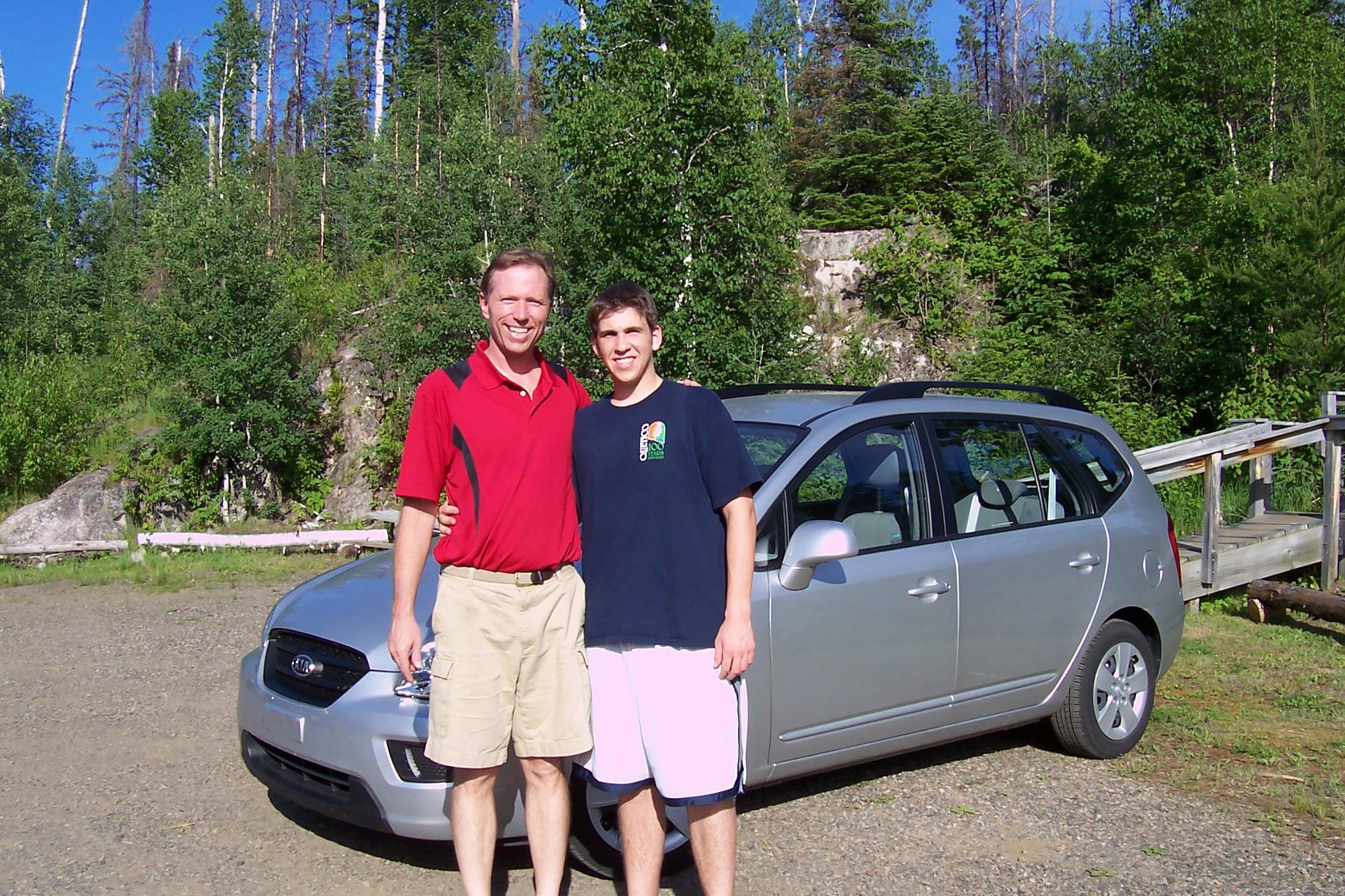 June 27:
Woke up to a gray sunrise on our first day for a 7 a.m. tow to Hook Island. We didn’t realize at the time that we would not see the sun again until our drive home. On the way out we saw a baby loon with parents. 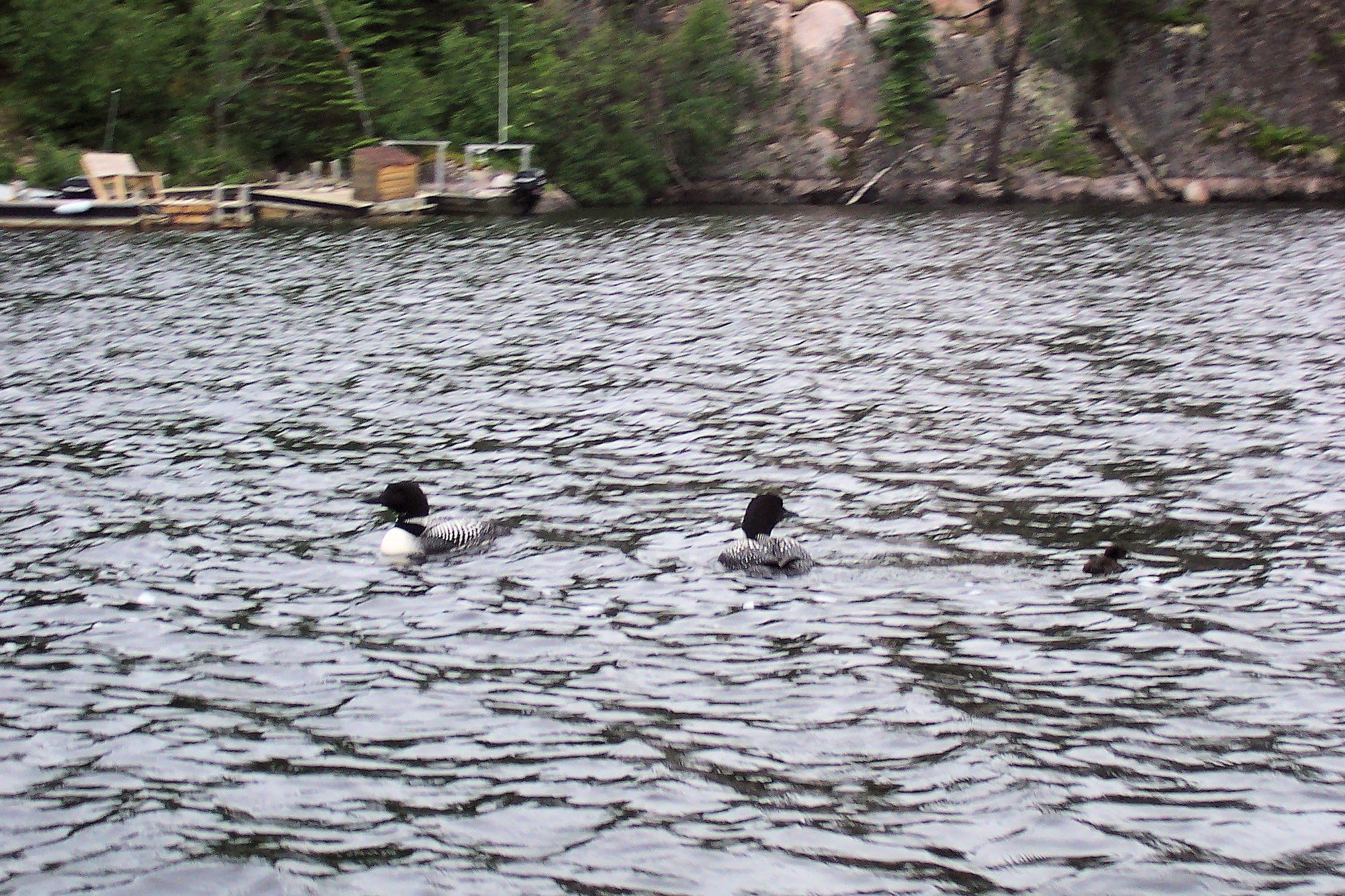 Based on our learnings from last year, on Hook Island we packed the canoe for a low center of gravity for our subsequent trips across Saganaga and Cache Bay. 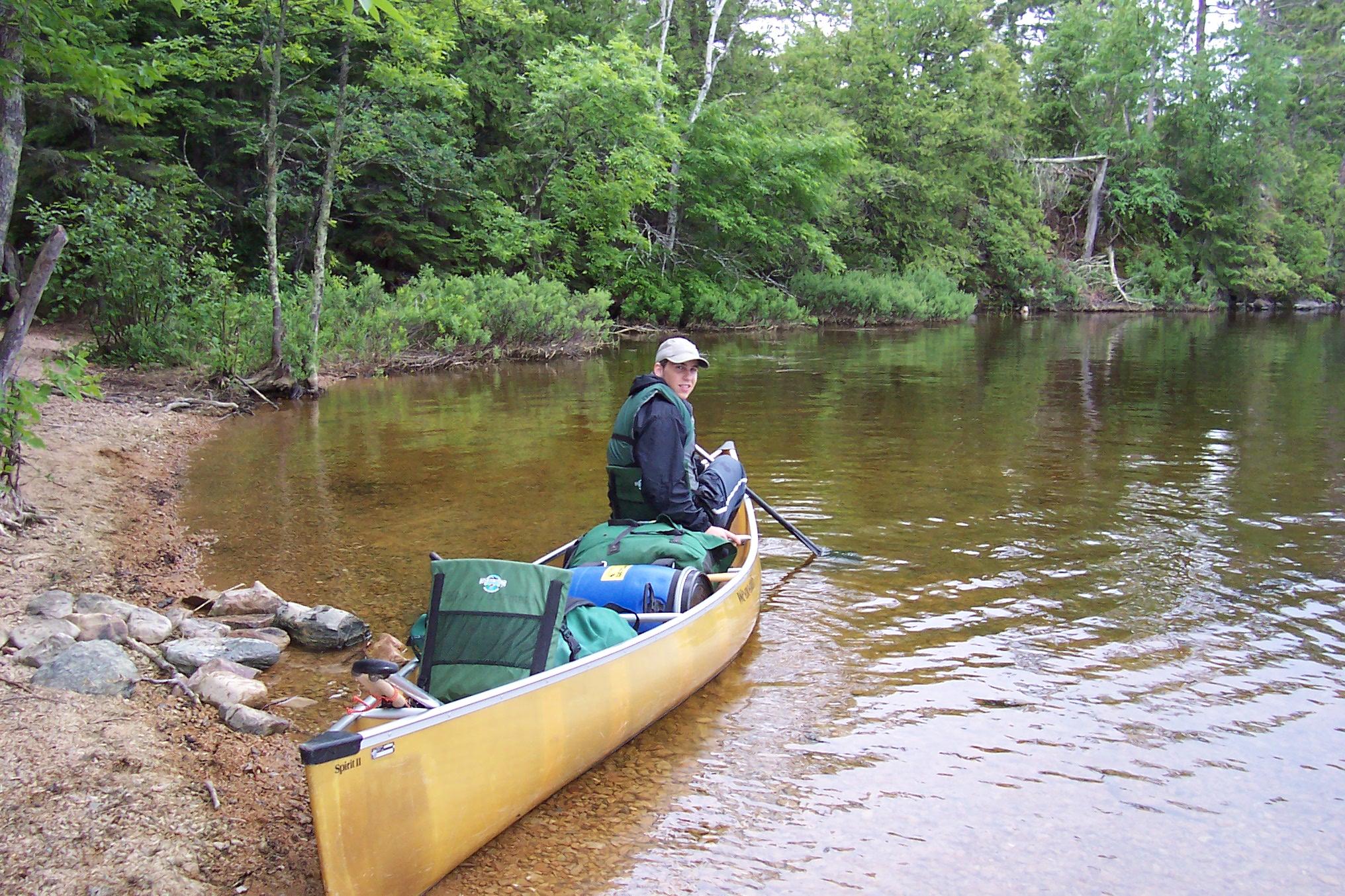 Our trip to the Ranger Station on Cache Bay island was uneventful and soon we were swapping stories again with Janice, the Canadian Customs Ranger. She again was happy to see my son there and encouraged him to bring his young friends next time. We would have spent much more time talking if not for the four parties which arrived shortly after we did. Janice quickly finished our processing and we were on our way by 9 a.m. We were concerned at the time that we would have a crowded trip – little did we know that we would only see one party past Silver Falls for the whole week.
This year we would only have one portage to reach our camp, instead of the 9 that we had last year. Silver Falls was beautiful as usual and the portage seemed easier than last year. This was the only time that we used the bug head nets the whole trip. 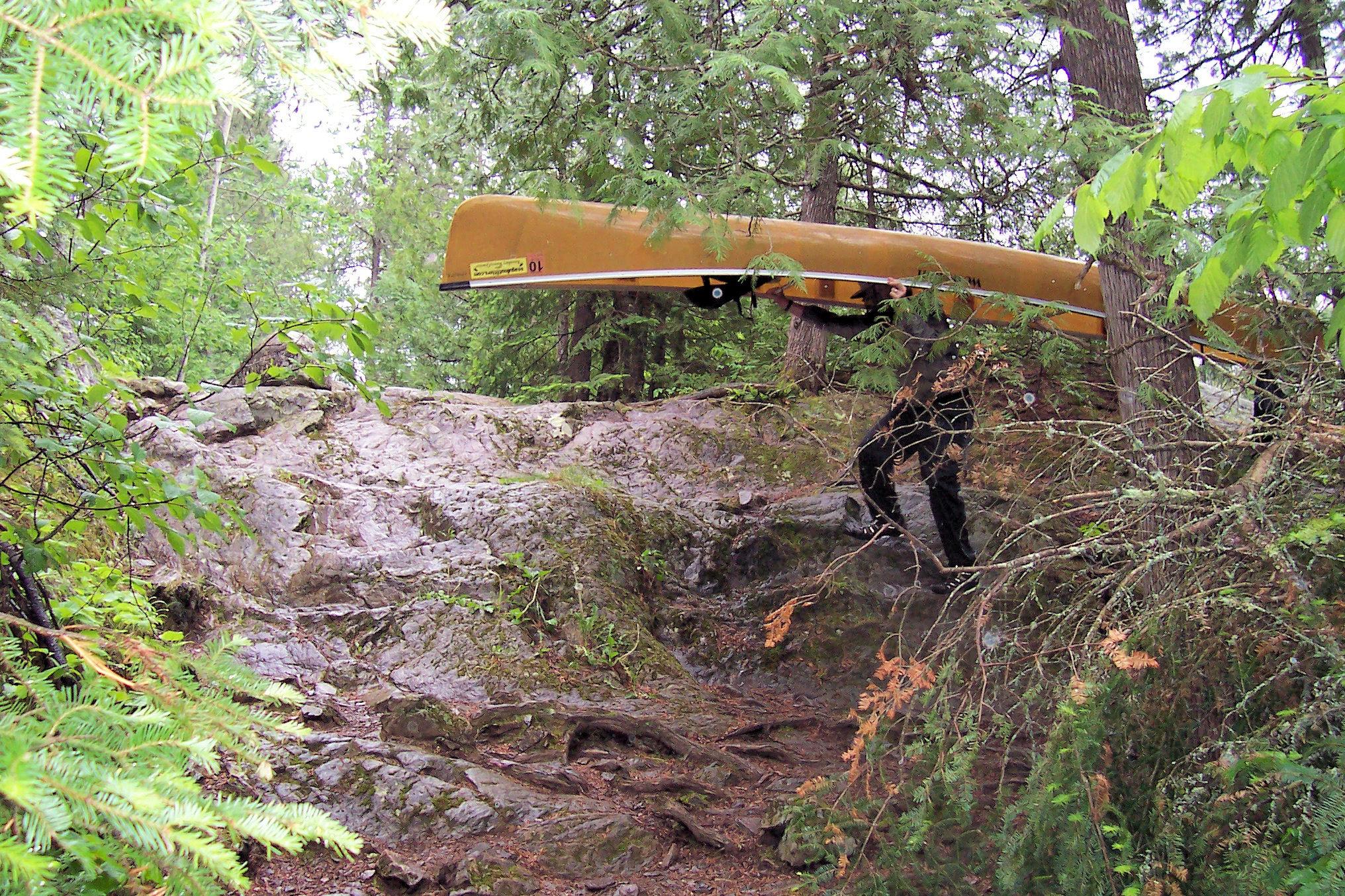 One advantage of the cold front moving through later this day was that we had a southeast wind at our back for the trip in, in advance of the front. Our 13 mile paddle in light rain and wind was uneventful. We arrived at our planned location to find a small undeveloped camp which looked very unused. 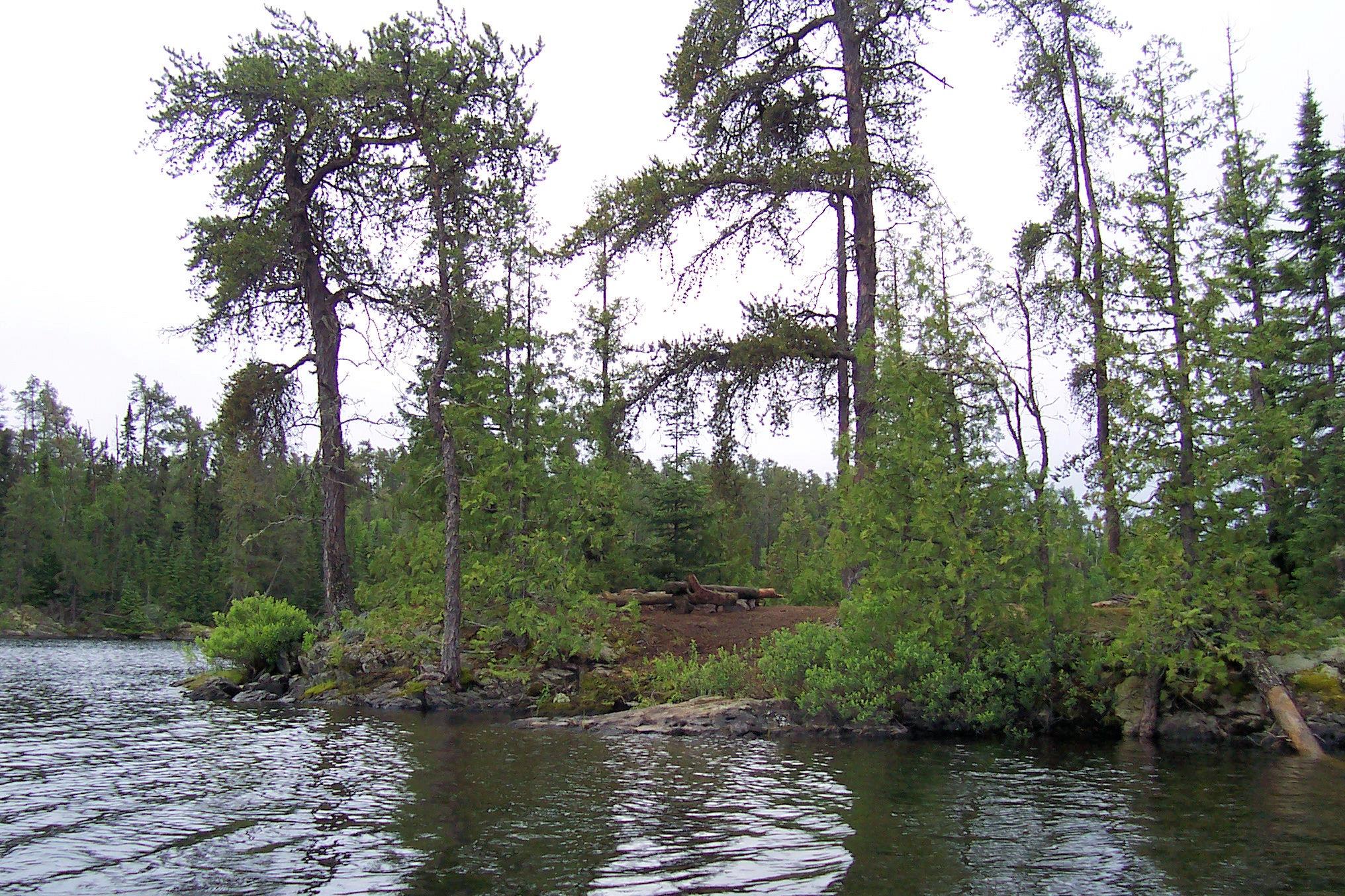 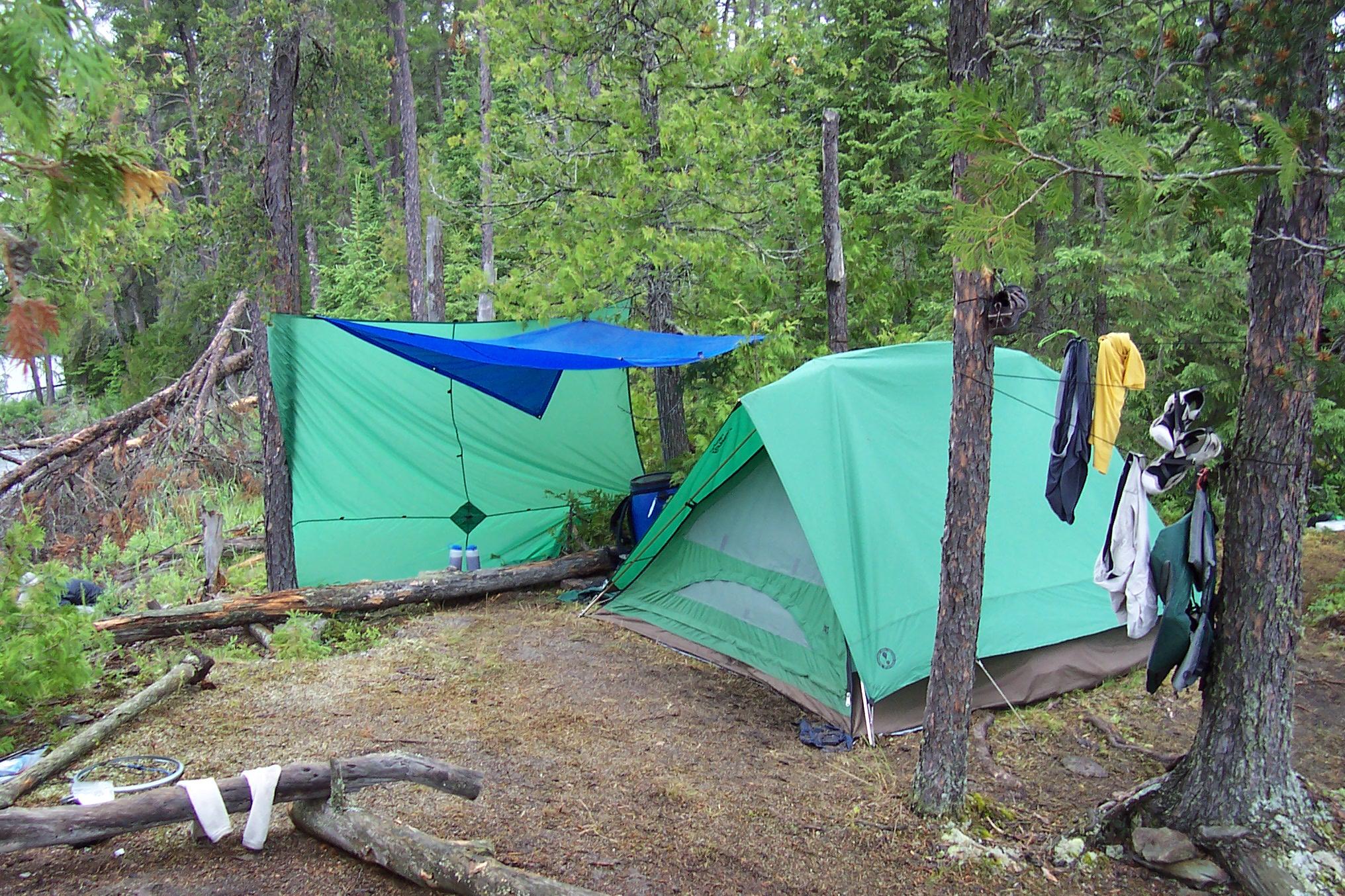 After some evaluation and debate, we decided to make it our home. This was a good decision – the peninsula location kept the bugs down, we had good access to the lake at multiple locations, and Jared put together a good fire ring area. The only downside was that there was only one place for a tent, which happened to be over a large sheet of moss covered rock, and there was no way to stake the tent. But we tied the tent off to nearby trees and it worked fine.
After setting up camp and eating a good meal, we set out fishing late afternoon in a light drizzle. We had some success jigging for smallmouth in 10 to 15 ft of water. After dinner we set out again as the skies cleared. This would be the only time we saw blue sky during the trip. 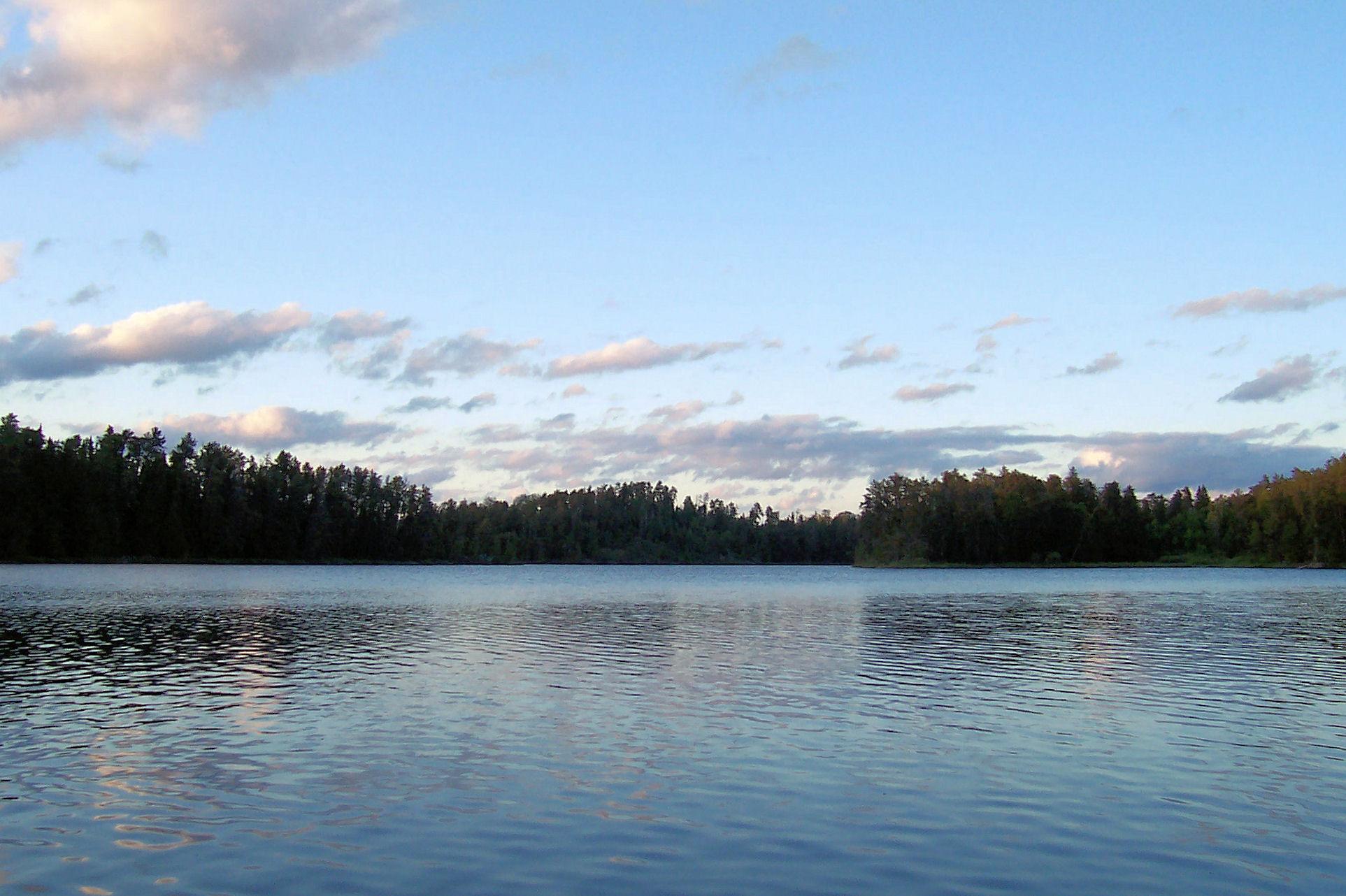 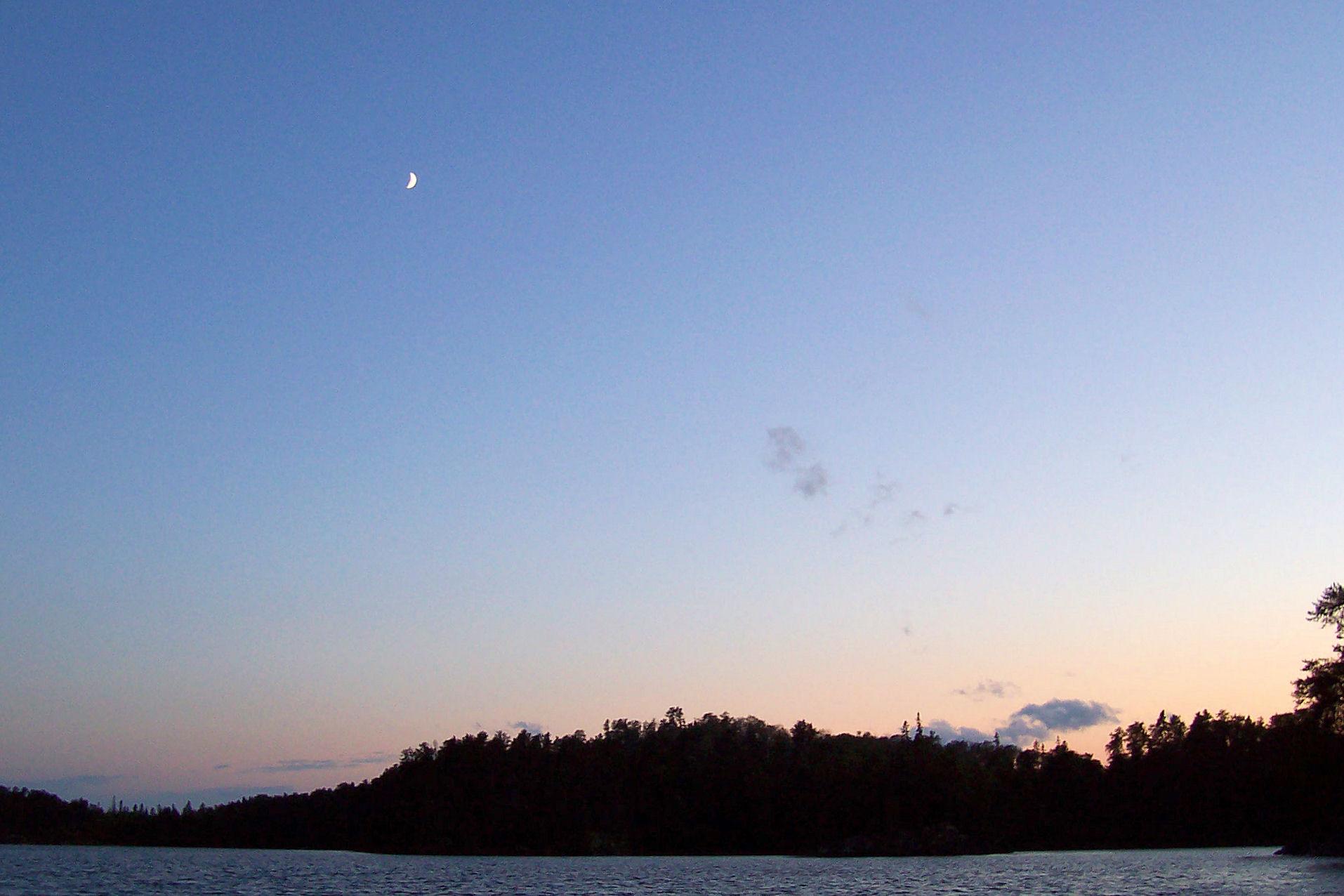 We had excellent luck fishing the shallows that evening with surface lures for smallmouth and northern. The surface water temperature was about 70 degrees. We ended the day catching on the order of 30 fish, including several nice smallmouth. 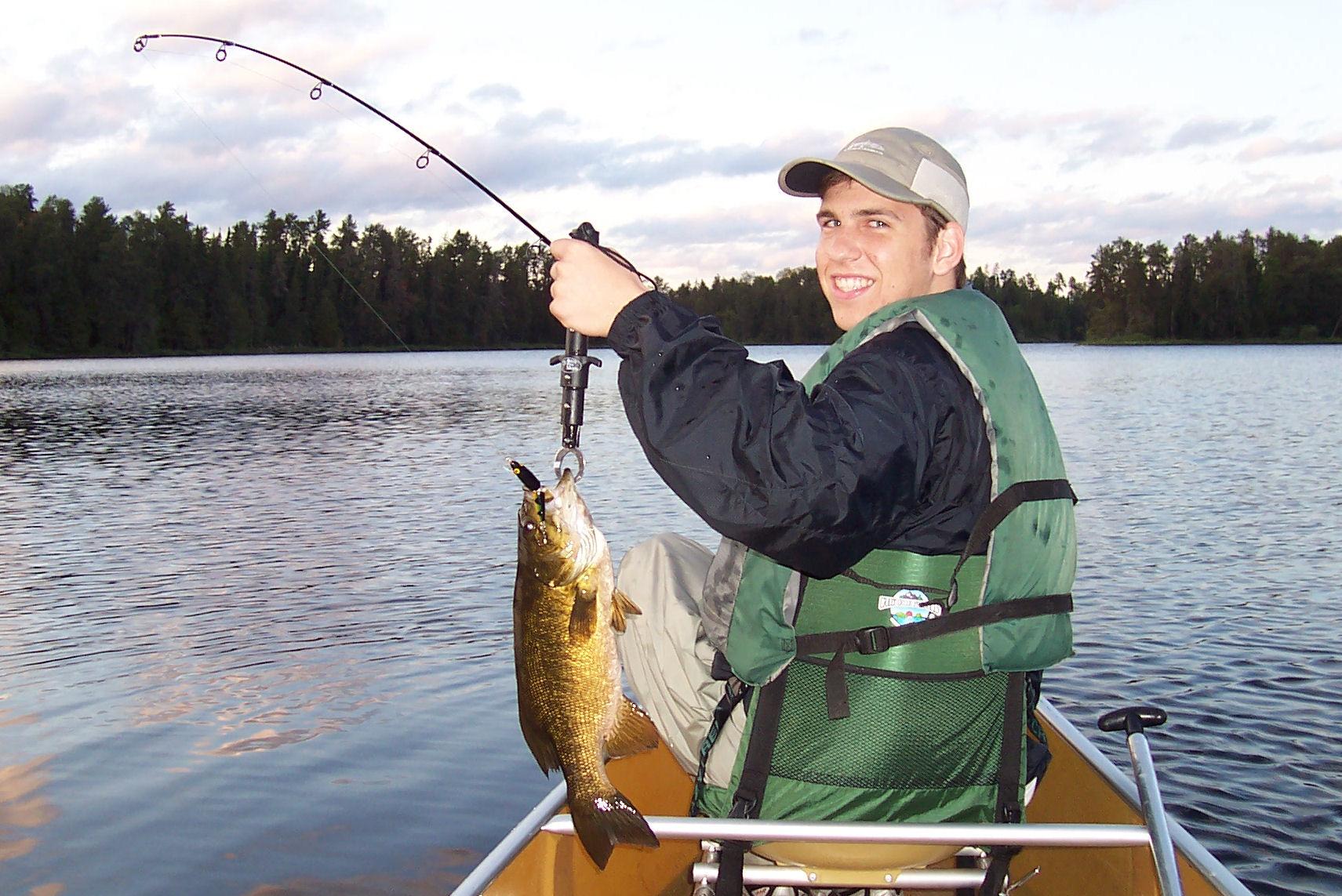 June 28-June 30:
With the passing of the cold front, each of the subsequent three days became colder and wetter, although somewhat less windy. June 28 saw high temperatures in the high 50s F with wind gusts over 40 mph and driving rain. By June 30, high temperatures were in the high 40s with wind gusts about 20 mph and steady drizzle. About 80% of our trip hours saw rain and the water temperature dropped from 70 deg F to 57 deg F as measured by the depth locator. Our fishing time was limited to about 6 hours per day because of the difficult weather. Towards the end of one day, my son was warming his hands by putting them into the lake water, but I told him that it probably wasn’t a good idea. 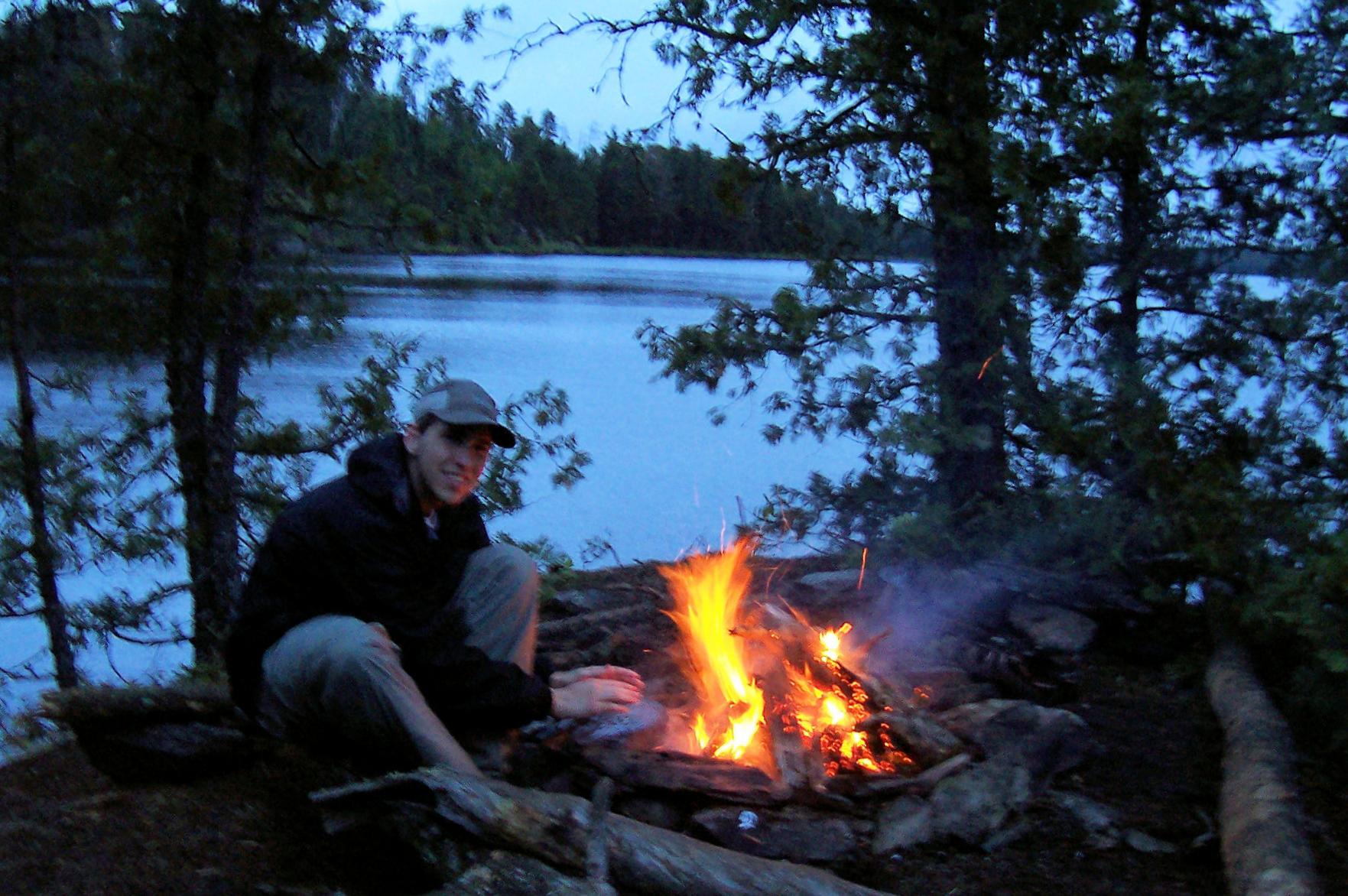 I rented a satellite phone this year which was fairly expensive but I was very happy that I had done it, in that it provided piece of mind for both me and my wife each night on our respective conditions. By the way, the reception and clarity were excellent.
Several bald eagles visited the area around our camp regularly. They would battle with the vultures and seagulls for fish and fish remains. We also saw otter, beaver, muskrat, and martens near our camp. 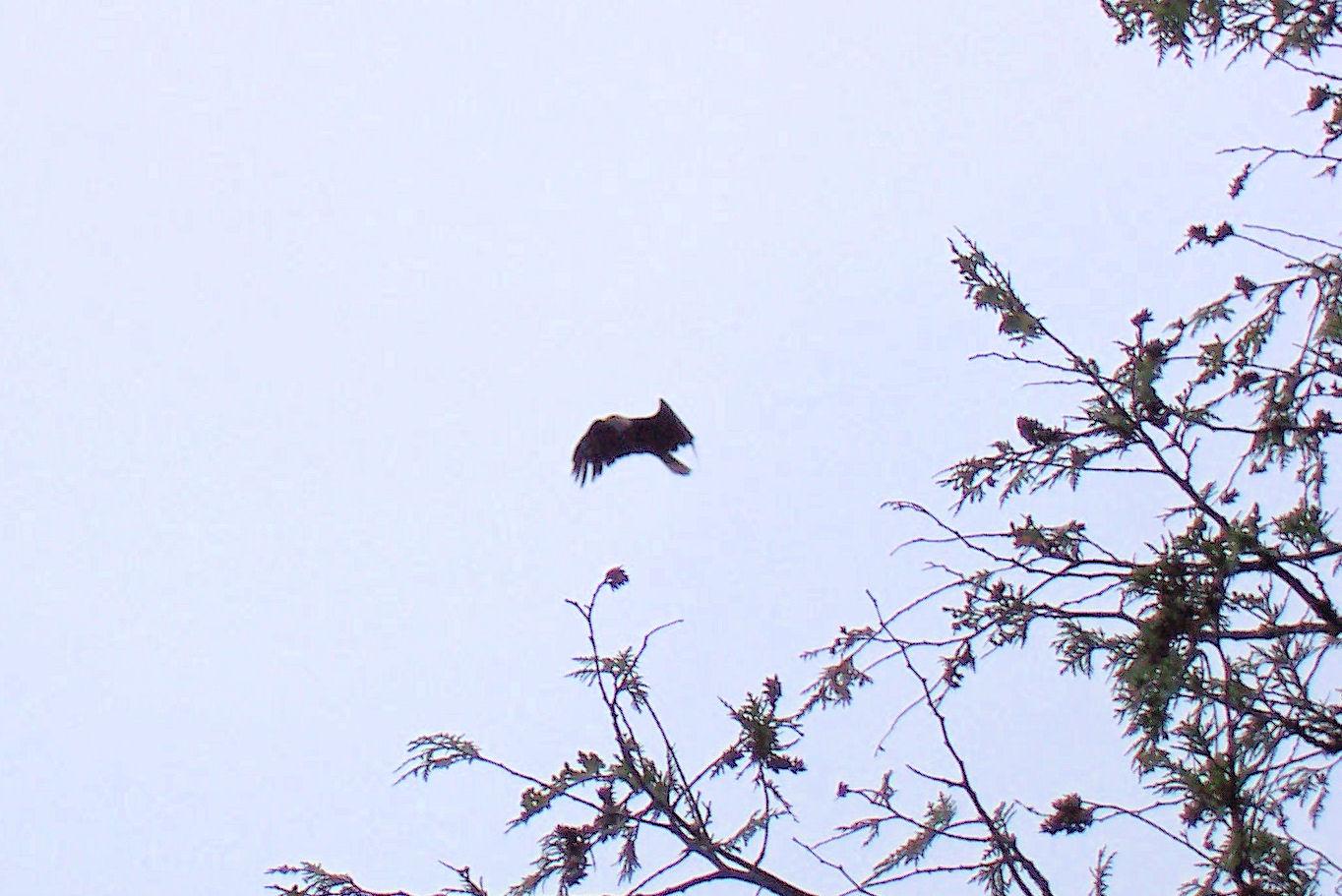 Our meals this year were excellent. Or perhaps they just tasted that way because we were so wet, tired and hungry. We only had one fish meal this year – a northern that swallowed a spoon and did not survive. 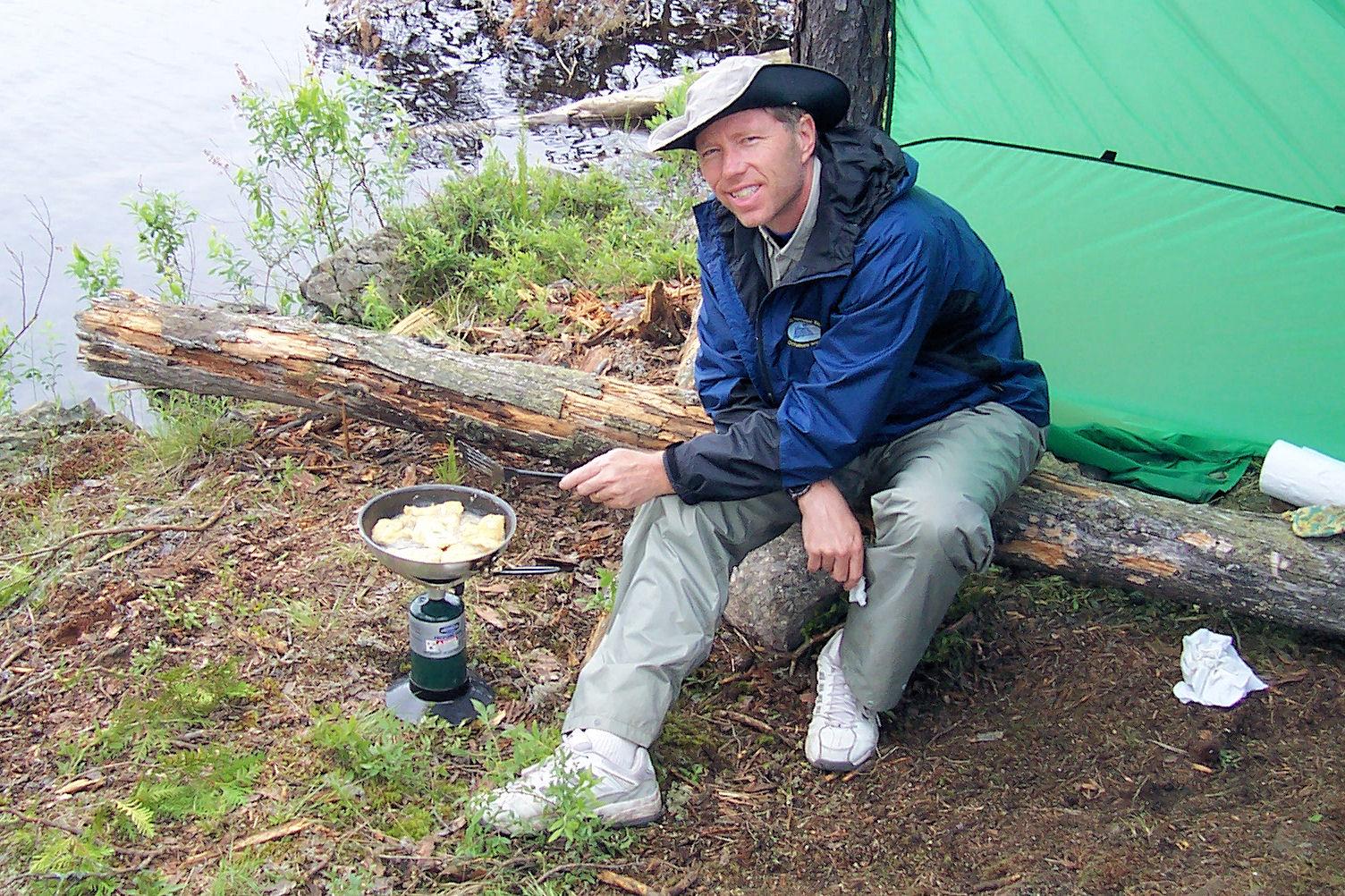 I love fresh fish but, as I get older, I prefer releasing them to eating them. Plus, Jared and I really enjoy the freeze dried meals and the convenience that comes with them.
We tried all types of fishing – surface lures, deep diving lures, jigging, Gulp baits, soft baits, spoons, spinners. We had intended to explore some of the nearby features such as Rat Bay, Moose Bay, Moose Lake and Smally Lake, but the windy wet weather didn’t lend itself to long trips. We caught our fish fairly evenly across all depths of water to 20 ft. A number of the smallmouth still had eggs, which indicated that the season is running late with the likelihood that many of these fish will not be spawning this year.
The highlights of the fishing were Jared catching a nice 20 inch smallmouth fat with eggs and a 35 inch northern which made several long runs from the canoe. 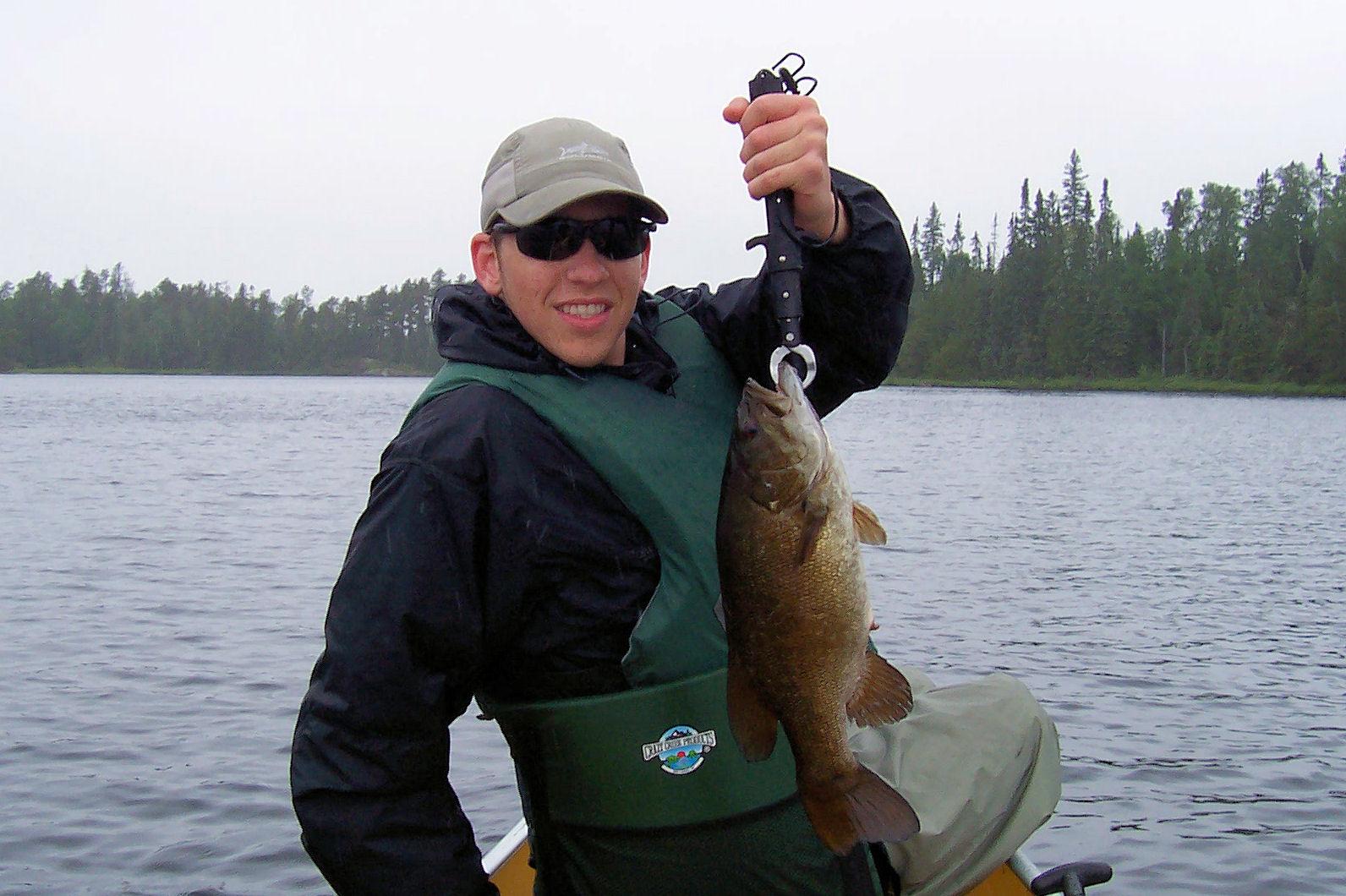 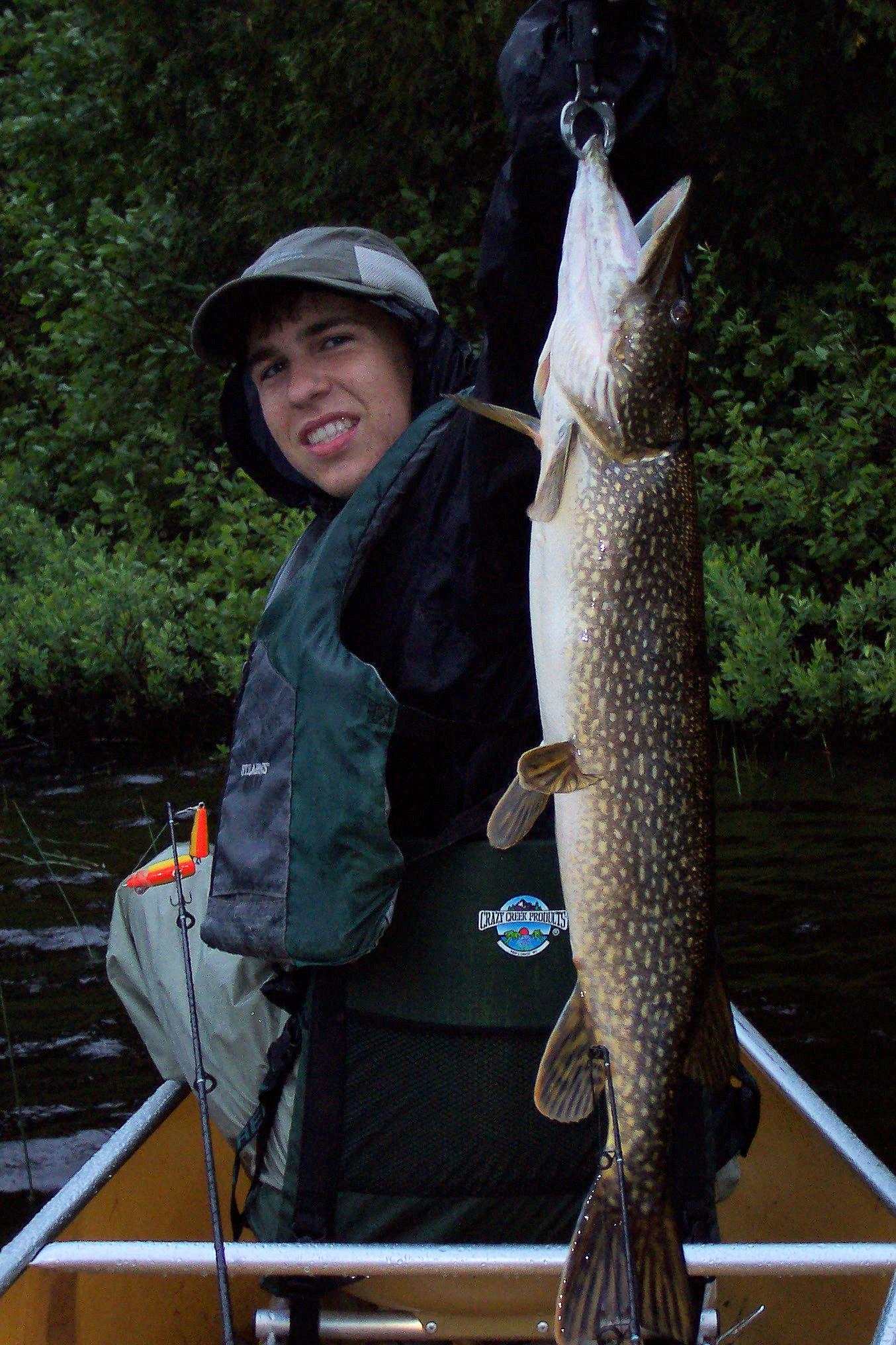 Here is a YouTube video of the northern catch:

I had one episode where a large northern went after a smaller 16 inch northern that I had already hooked. As I brought it close to the canoe, the large northern looked like an alligator shaking its head back and forth with the small northern between its teeth. We couldn’t land the large northern, though, since it wasn’t hooked.
July 1:
On our last day, we broke camp early so that we could fish on our way in. This was the first time that we fished from a loaded canoe, but it was not really a problem. By now the fishing had really turned off and many “fishy” looking areas were turning up nothing. However, at the outlet of Silver Falls, I landed a nice 25 inch walleye which put up a good fight. I thought that it was another northern but I was pleasantly surprised. 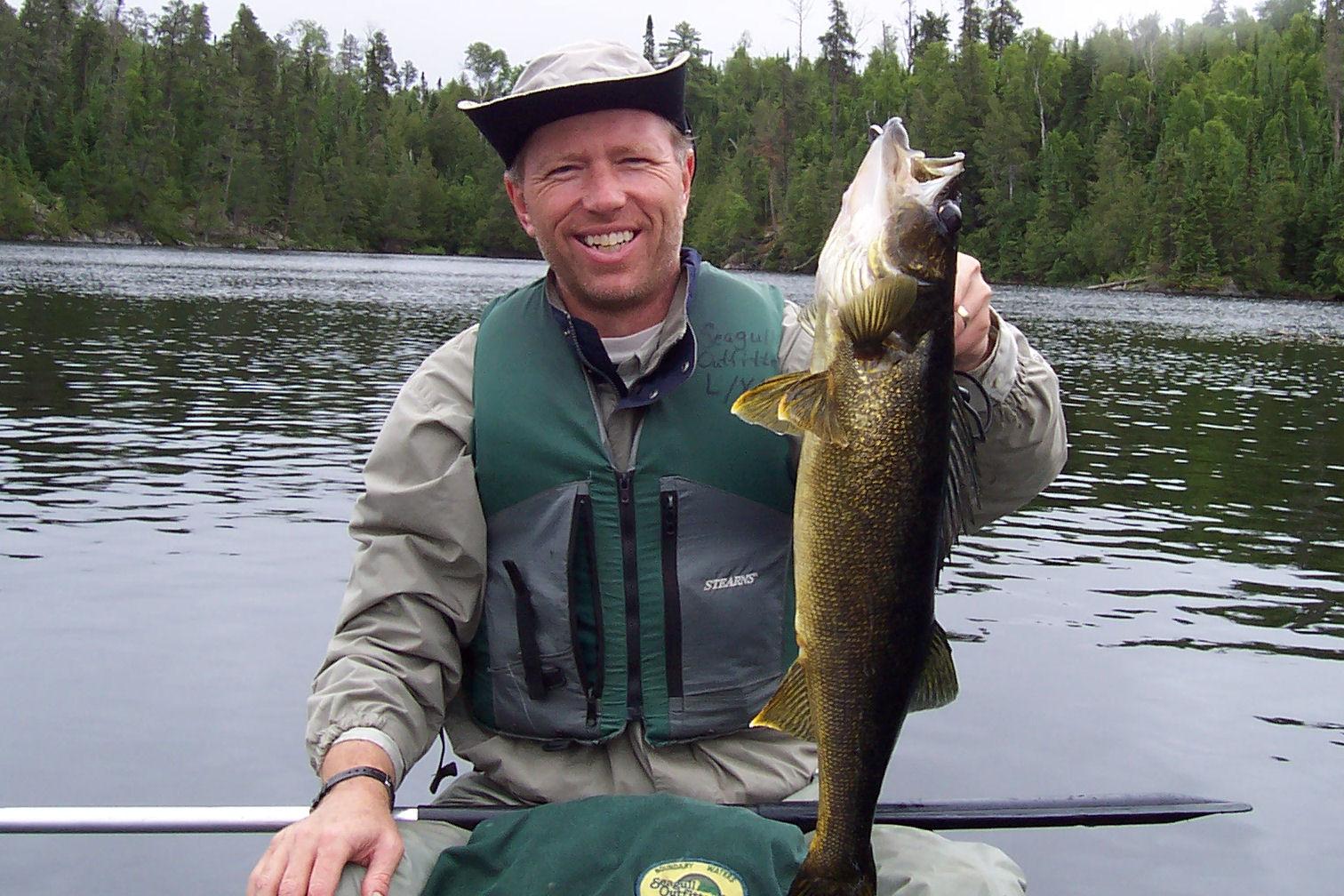 This motivated us to then try for the “Grand Slam” and we spent a few hours fishing for Lake Trout in Cache Bay , but with no success. The tow back to Seagull Outfitters went quickly and it felt good to shower and get back to civilization. We stopped in Grand Marais for Sven and Ole’s Pizza (highly recommended) before returning to Duluth to stay overnight for our flight out the next morning.
Things which worked out well (besides the ones I listed last year):
- No need for sunscreen
- Cold lake water makes for excellent drinking
- Wind and rain drives the bugs away
- Fire is good
- Wind at our back during both inbound and outbound trips
- Two portages this year instead of 18
- Freeze dried meals were excellent, including Chicken & Dumpling
- Not tipping the canoe this year
- Renting a satellite phone

Things which did not work out so well:
- Rain every day (hey, just like last year!)
- Never saw as many stars as hoped with all of the clouds, much less the aurora borealis (again, just like last year)
We ended the week catching around 100 fish, including numerous large ones. We were happy with the week, but someday it would be nice to spend a week in Quetico where analogies to biblical weather events didn’t come into play. For the past two trips (our only trips), the weather has been terrible. Nevertheless, Quetico is a fantastic place to spend time with your family, assuming that they understand that it will be a challenge. 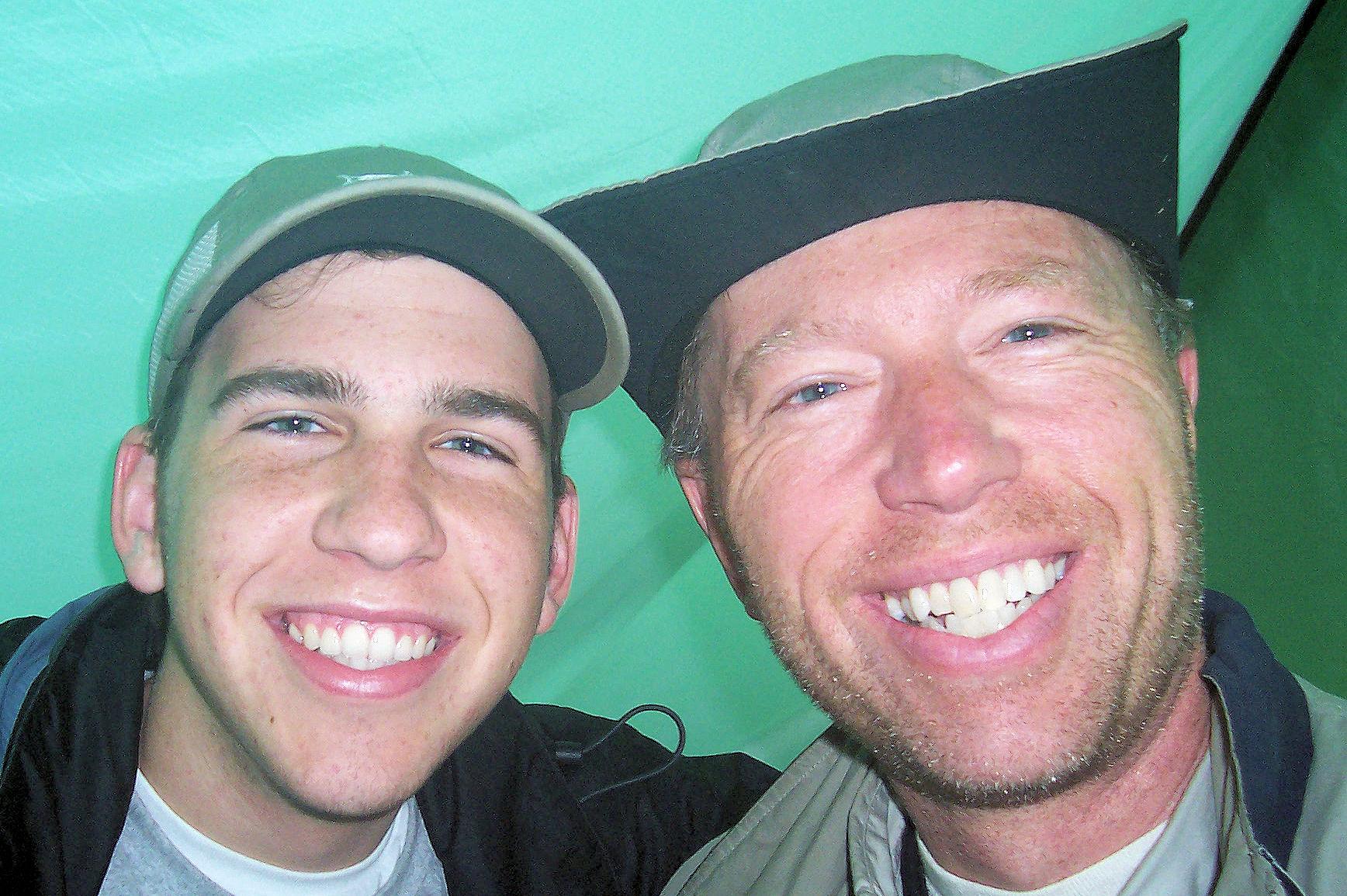