First BWCA trip - Lake One to North Wilder
by 2112

Trip Type: Paddling Canoe
Entry Date: 08/26/2009
Entry & Exit Point: Lake One (EP 30)
Number of Days: 4
Group Size: 3
Trip Introduction:
This was my first trip to the BWCA. The plan was to make a loop from Lake One > Lake Two > Lake Three > Horseshoe > Brewis > Harbor > North Wilder > Hudson via Wilder Creek > Lake Four > Lake Three > Lake Two > Lake One. My traveling companions were my friend Ken from North Carolina and my nephew Tim from Minneapolis. I'm from California. Before the trip, Ken and I spent a few days along the north shore of Lake Superior visiting most of the state parks and also visiting Isle Royale National Park on a day trip (not worth doing a day trip to Isle Royale IMO). We then traveled back to Minneapolis to pick up Tim and headed back up to Ely visiting the Soudan Mine on the way (highly recommended). We used Lake One Outfitters and stayed at the bunkhouse at the Kawishiwi Lodge the night before. We loved the bunkhouse and got great service from Lake One Outfitters and would definitely recommend them. I had something on the bottom of my camera lens for most of the trip so there is a smudge on most of my photos. I have even more photos on my travel photo website at http://www.pbase.com/2112/bwca so take a look there if you want to see additional photos.
Discuss Trip: View Discussion Thread (13 messages)
Day 1 of 4
Wednesday, August 26, 2009

Woke to a beautiful clear morning and started out around 9:00 am. Once we got out into the main part of Lake One we initially had a hard time with navigation. Islands we saw didn't seem to be on the map and it took a little while to get used to the scale of the map compared to the scale of the lake. We checked the map frequently and finally made our way to the first 2 portages. These portages were easy and we soon enough found our way into Lake Two followed by Lake Three. The day was warm and clear and perfect in every way. We spotted eagles from Lake Two. By the time we got across Lake Three we were used to the scale of everything and easily found the portage to Horseshoe Lake. The portage from Lake Three to Horseshoe was the easiest yet. There was an island straight out from the portage that we stopped to eat lunch on. We could only see one group of people on the lake and it looked like they were leaving a campsite. After lunch we headed over to that campsite and it was a keeper. It had a nice view, a level tent pad and the latrine was clean. It was around 1:30 pm at this point. We set up camp, searched for firewood, and worked on hanging a bear bag. This site really didn't have good trees to hang a bag from. There were no high limbs sticking out from trees high enough to hang a bear bag from. We decided to use two trees and string a line between them and use that. Although it appeared that we were the only campers on Horseshoe Lake, there were two groups of day trippers. One group, consisting of a canoe and a kayak, passed back and forth 3 times. This group was LOUD! So loud in fact, that had they been camping on the lake we would have packed up and moved on. By 4:00 pm though, everyone was gone and we had the lake to ourselves. In fact, we would not see anyone else for a couple days. We took a swim, started up a fire, and cooked up some ChedderWurst for dinner. Tim tried fishing for a short while without any luck. Shortly after dark we went to hang our bear bag. As soon as we started to string it up the limbs came crashing down. So much for a bear bag. We hid our food around in several locations and called it a night. That night went to sleep to the sound of a loon. 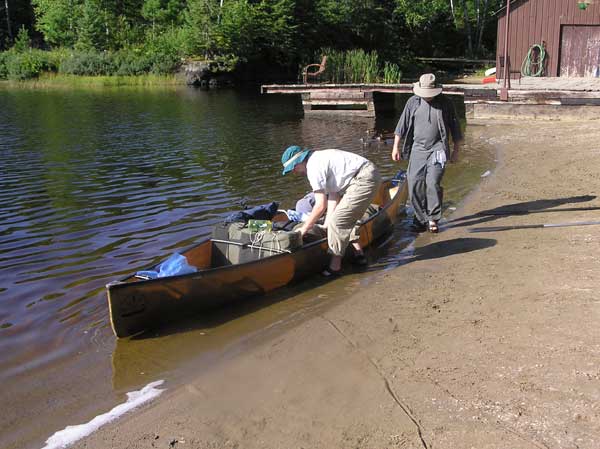 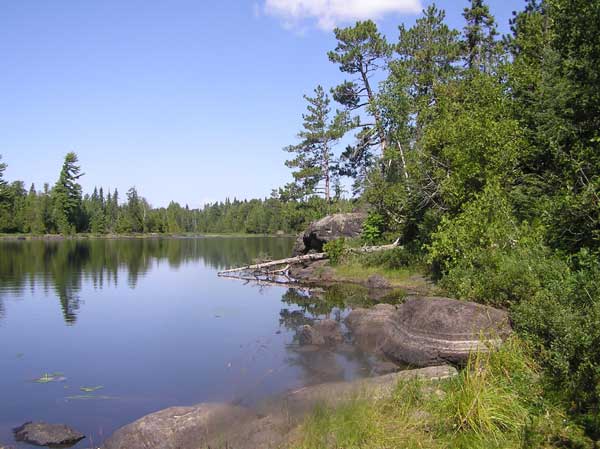 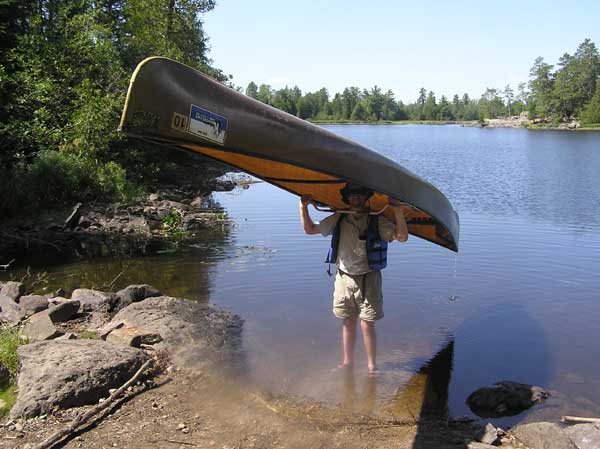 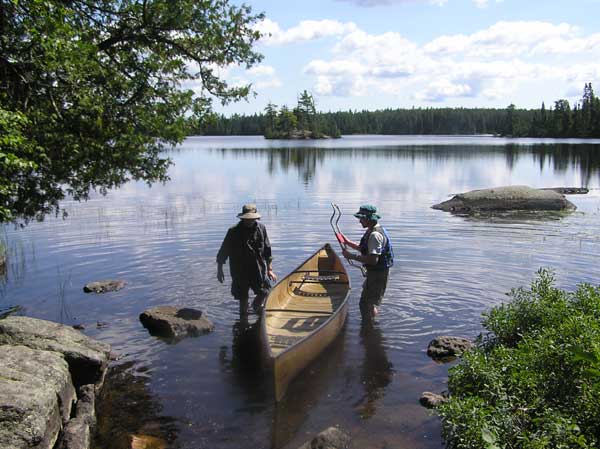 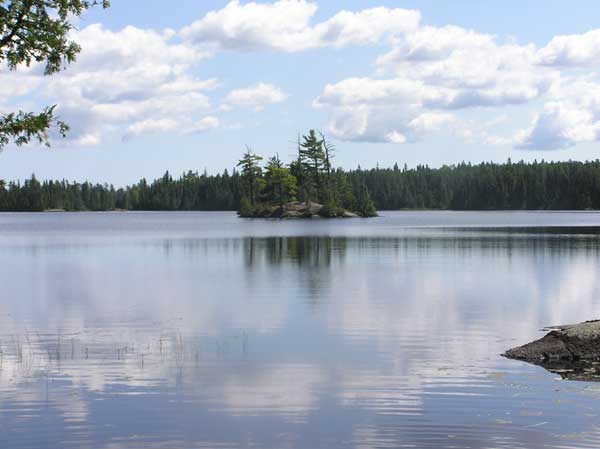 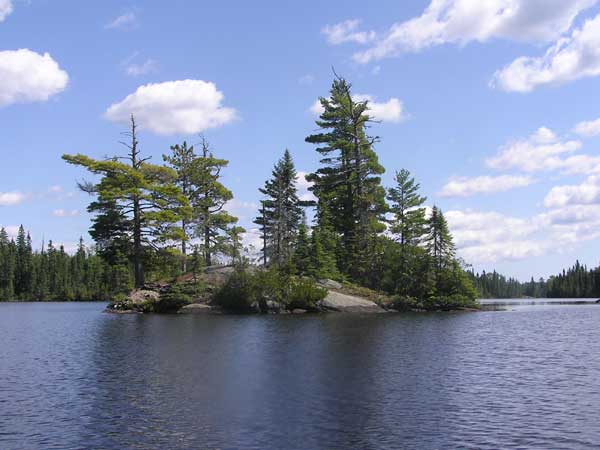 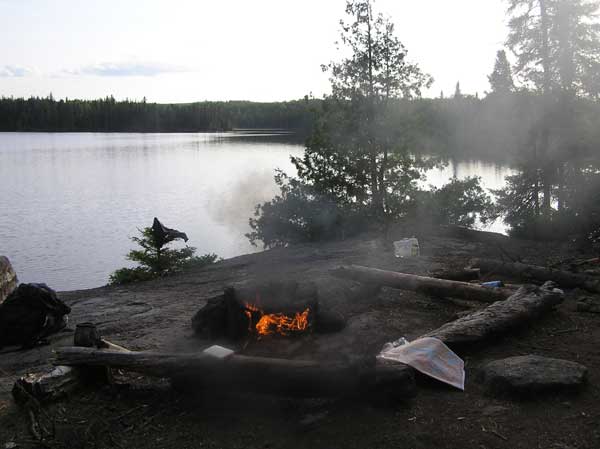 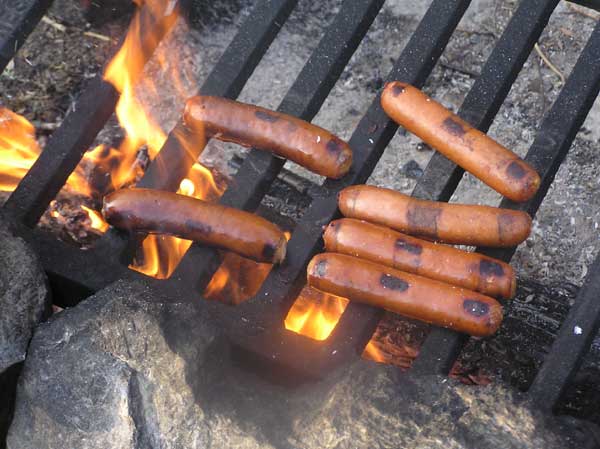 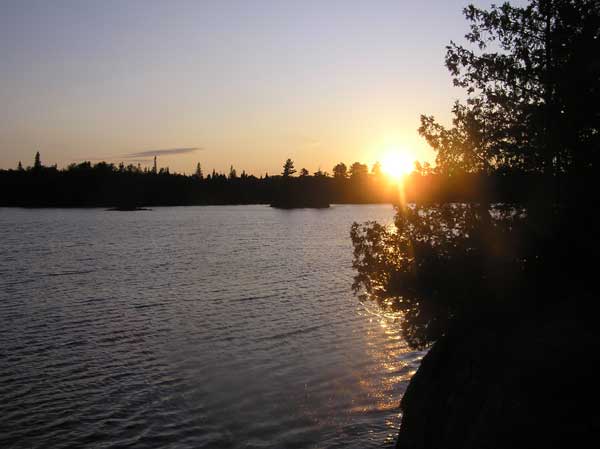