Snowbank to Knife and Back
by Landstryker

Trip Type: Paddling Canoe
Entry Date: 08/28/2009
Entry & Exit Point: Snowbank Lake (EP 27)
Number of Days: 5
Group Size: 4
Trip Introduction:
My buddy Mike B had been on me all year to take him to the Boundary Waters. I did a lot of camping this season - at least 2 trips a month every month since April - but somehow the trip with Mike B just never came together. Various lakes and various configurations of people were suggested, but I couldn't find the right balance of skill levels, dispositions and schedules. Finally my girlfriend EP signed on as a co-leader, so I just went and bought the permit. Mike B and another dear friend Movie Mike would join us for a 4 night trip from Snowbank to Knife - an area I had never seen before. Lots of things could have gone wrong. You really never know how people are going to do once you get them out in the woods, and you certainly don't know how well people are going to get along when they're packed into a tent together for hours on end. On top of all that, it was the first time EP and I would take a canoe trip together, and since we both have very strong feelings about canoes, the wilderness and the Boundary Waters, the trip was bound to be a big deal.
Discuss Trip: View Discussion Thread (2 messages)
Day 1 of 5
Friday, August 28, 2009

It was the morning of Day One, and we were already behind schedule. Rather than waking up before dawn and rousing the troops as planned, I was the last one to crawl out of bed, and an hour late at that. We had arrived the night prior to pick up the canoes Mike B’s family was lending us and to stay the night, hoping for an early start on Snowbank. Mike B’s folks set us up with the boats, then feted us with grilled beasts, garden vegetables and homemade wine. After dinner we did a final gear shakedown. Mike B, an Iron Range native and Eagle Scout, had spent lots of time in the Boundary Waters as a kid, but mostly in motor boats on Basswood, and never to stay. I had given him a sleeping bag stuff sack for him to pack his clothes in, as well as a detailed list of what he’d need and what he wouldn’t. Understandably, Mike B concluded that I meant for him to fill the stuff sack completely, and so most of the gear shakedown was spent depriving him of redundant gear. After we’d reduced his pack load by about half, we sorted tackle - which would be his responsibility given his superior fishing knowledge. While beers and whiskey went around, the night got long.

I really don’t think my alarm went off at all, but regardless, it was Mike B who got up first and got us moving in those early hours. Soon enough we were on the road and at our entry point, Snowbank Lake.

I’d never paddled Snowbank before, only seen it, at a great distance, from the Kek during a snowshoe hike last winter. But I knew its reputation and I’ve paddled enough big water to know that a lake like that can make things real interesting real fast. The morning was dark and grey and the forecast called for rain and winds up around 15 mph by mid day. Hardly a catastrophe, but given that we had two novice bow men, two leaders a little lean on sterning experience, and two canoes I had never paddled before, I wasn’t eager to test our mettle on Snowbank.

But fair weather or foul, I was determined to get on the water. I concealed my apprehension and fell in with the high spirits of the rest of the group. As we pushed off from the Snowbank landing, a cool, steady rain began to fall. No one complained. It was a beautiful, misty morning and it was good to get the paddle in my hands again. Mike B proved to be a strong paddler, and the boat tracked nicely across the water. The winds stayed nice and light, allowing us an easy passage north to the Boot Lake portage. I didn’t time it exactly but I’d say we made it the whole journey in about 45 minutes - not bad.

Now a note about the boats. I’m very spoiled in that I typically have access to three beautiful, handmade cedar strip canoes built by some close friends of mine. For a variety of logistical reasons, we decided not to take any of the wooden boats on this trip. Mike B’s family and his in-laws live in the area and own several boats between them, so it made sense that we would use theirs. As it turned out, the two available that weekend were a lightweight aluminum (sounds like an oxymoron, but it was only 55 lbs) and an 80 lbs. Alumacraft. We were very grateful for the free boats but some logistical issues had to be re-thought.

My philosophy of Boundary Waters travel is predicated on single-portaging. One man takes a relatively light Duluth pack and the boat (with paddles and rods strapped inside), while the other guy takes a heavier internal frame pack and any loose gear. You walk the portage once and you’re ready to hit the next lake, no problem. Mike B’s boats used a different yoke than I was used to (see pictures). While they were very comfortable when carrying just the boat, the different yokes pretty much made single-portaging impossible: the pads are so long they would actually sit on the Duluth pack, redistributing the weight into the small of your back and causing some major balance issues. Movie Mike powered through the second link of the Boot portage with the lighter canoe and a Duluth pack, but I only made it a few steps with the Alumacraft and my portage pack before nearly falling backwards.

So, it would be a double-portage trip - packs and paddles first, then walk back and get the boats and anything else. Not a tragedy, but it does take a lot more time. After a rainy paddle through Boot we took on the portage to Ensign, listed as a 220 on our Fisher maps. Clearing the portage, with no significant breaks, probably took us an hour and 15 minutes. Arriving at Ensign it was now early afternoon and time for lunch - but given our late start and our greatly slowed travel, it was decided that we would make camp there, rather than push on to Knife as planned.

From the portage we spotted a beautiful campsite on a long, tall rocky point and snatched it up. Since we made camp early, there was plenty of time for a fishing expedition just before dusk. Mike B took charge of the fishing. He had insisted on bringing minnows, which I admit I had been skeptical about, but I was immediately won over when we started catching fish within ten minutes of getting on the water.

I caught the first one, a small walleye. As soon as it was in the boat, we discovered that we had forgotten a stringer. No problem, Mike B quickly fashioned one from some spare parachute chord and in a few minutes I was fishing again. Maybe ten minutes went by when I pulled up a big sucker. Easily the largest fish I'd ever caught, it was nearly as long as my arm. And revolting. Mike B didn't know how to fillet it and it was more meat than we could put down in a night, so back he went in the lake. We paddled to another part of the channel and Movie Mike caught a nice northern, his first fish ever. And shortly after that he landed a perch. While Mike B worked on getting the perch onto the stringer, his own line got a strike, which was soon revealed to be a crayfish attacking his minnow. That went in the boat as well.

The clouds started to break up just as we landed. A faint rainbow broke out over the lake, and the sunset painted the clouds pink. Then a heron flew overhead. Moments later, EP spotted a bald eagle. We all laughed for joy at our good fortune.

After Mike B built a fire and filleted the fish, we enjoyed pan-fried walleye and perch, then I cooked up some Viggo beans and rice with some added northern. All this was washed down with some fresh beer from Fitger’s Brewhouse and of course our signature backcountry cocktail: the Whiskey Josh, a cup of Jameson with a splash of tepid lakewater. 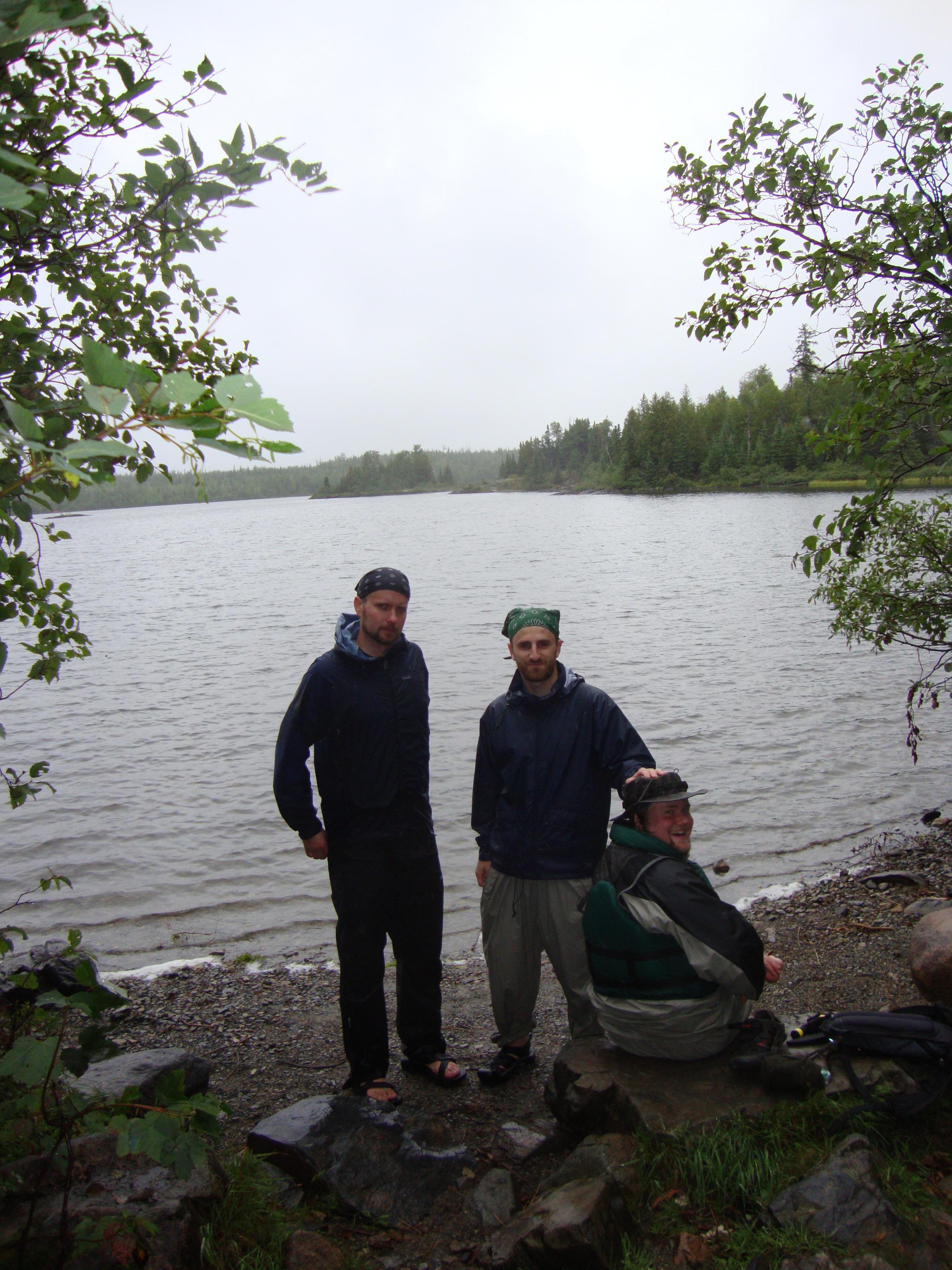 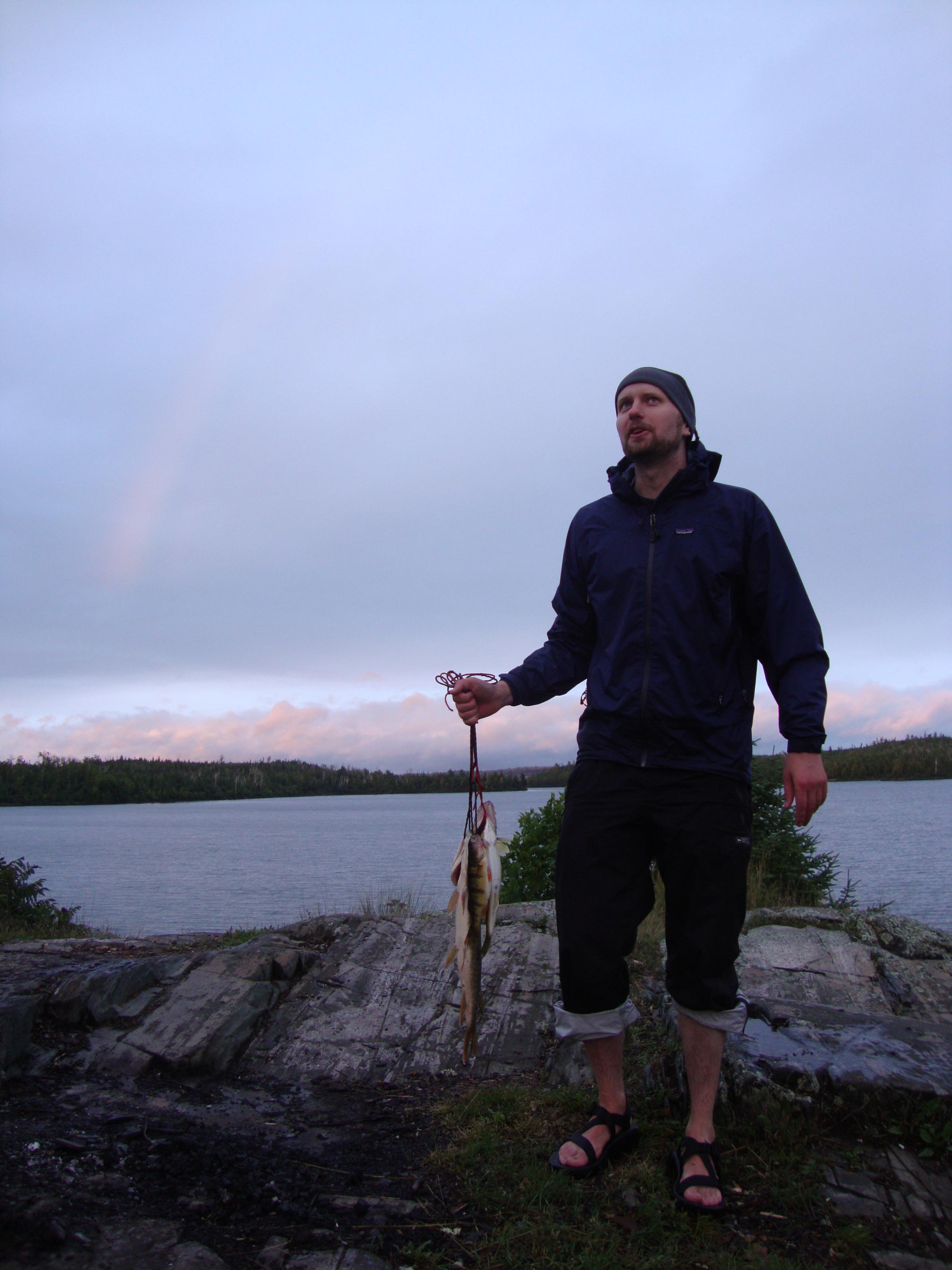