I get up around 4:00 AM. The coffee maker has started and is noisy enough to wake E who is sleeping in the living room. C comes down the hallway fully dressed. I am slightly surprised, but should not be. E and C operate on Michigan time. J is rousted out of his slumber (he is on Illinois time and still in college, so anything before 11:00 AM is early for him) and everyone has a bowl of cereal and a chance at the coffee. The last of the gear is thrown in the van and we are on our way at 4:45 AM.

The drive up is uneventful, which is a blessing. In ’07 as I was driving through Duluth during a rain storm, I accidentally blew a red light near Home Depot. I came close to getting T-boned from both directions. It was totally my fault but I am grateful for the quick reflexes of those other drivers.

This time we stop at Home Depot to get some lithium batteries for a SPOT device. C (age 66) is concerned about a possible medical emergency. After seeing the size of his pack, the rest of us concur. While getting the batteries we receive a call from the Minnesota contingent. They are just south of Two Harbors and tell us that we are on our own for lunch. They are planning on Subway in Ely.

We continue up Hwy 53 to 169 and arrive in Ely around noon. Just as we hit town the phone rings again. L and T have arrived and are at the Subway. They sound surprised when we tell them that we should be seeing them in the next couple of minutes. T thought that they were at least thirty minutes ahead of us. I tend to drive a little faster than the authorities recommend.

We eat our subs, cross the street to the Holiday for gas and fishing licenses. While waiting for the others I see a man drive by on the street in on old Willy’s jeep. It looked like he had a .30 cal mounted in the back. I know it cannot be operable, but it still makes you do a double-take.

A quick drive to the ranger station, LNT video watched and permits in hand we completely forget about buying live bait and head for Red Rock to get the canoes.

Oh my! I want one! We all watch (and drool just a little) as Joe loads three BRAND NEW, NO SCRATCHES, Souris River Quetico 17’s on his truck. Joe tells us not to worry; he knows there will be scratches when we return them. As he is tying them down he is praising the qualities of the SR Q17. Every word proves to be true over the next five days. Onward to Snowbank!

L and J, C and T, E and K(me) are the pairings for each canoe. I get the bow seat. It has been a while since I have paddled from this position but I quickly fall into a rhythm. E and I work well together. He likes to pick a side and stay there unless the wind dictates otherwise. Therefore, I paddled on the right for the entire trip. The wind was never an issue.

It seemed like we only needed about five strokes and the Q 17’s were up and flying. We crossed Snowbank quickly and safely. ’07 was the last time we were here and it was a different story. There were only four of us and in hindsight we should have waited for the wind to die down before trying to cross. L and K were in a Mad River Eclipse. E and T were in an Old Town Penobscot. The wind was heavy out of the west and we flew across that lake on two foot rollers and whitecaps. As we approached the eastern shore and what we thought were safer waters, one wave set E and T down on a rock amidships. It looked like they were going to capsize while L and K were helpless to do anything as we were still fighting our own battle. E was white-knuckling the gunwales and making weird noises. T had the presence of mind to jump overboard into the waist deep (or chest deep depending on the wave rhythm) water and slide the canoe off the rock. In the meantime L and K made it around a protected point and beached our canoe to head back on shore to see what we could do. A scary moment had passed and it is now laughed at on a regular basis. But after that crossing, L claimed that it was three days before his sphincter relaxed enough to be of any use.

This trip is definitely calmer. We portage into Disappointment and take one of the northern sites. Tents and hammock are set up. I go for a swim. Temps have been in the mid 70’s and I am a cool weather type of guy. E catches a small northern from shore. We eat L’s traditional pre-made burritos for supper and start to prepare for bed. The water filter comes apart while J is pumping for everyone. The part holding the O-ring on the end of the pump handle has come off. A little Super glue and it will be as good as new. Too bad nobody brought any. No hot glue sticks either. We end up getting it back on by sticking four layers of plastic bag over the male end and stuffing it back on. It is a fragile repair and leads me to get most of my water by just dipping out of the middle of the lakes. 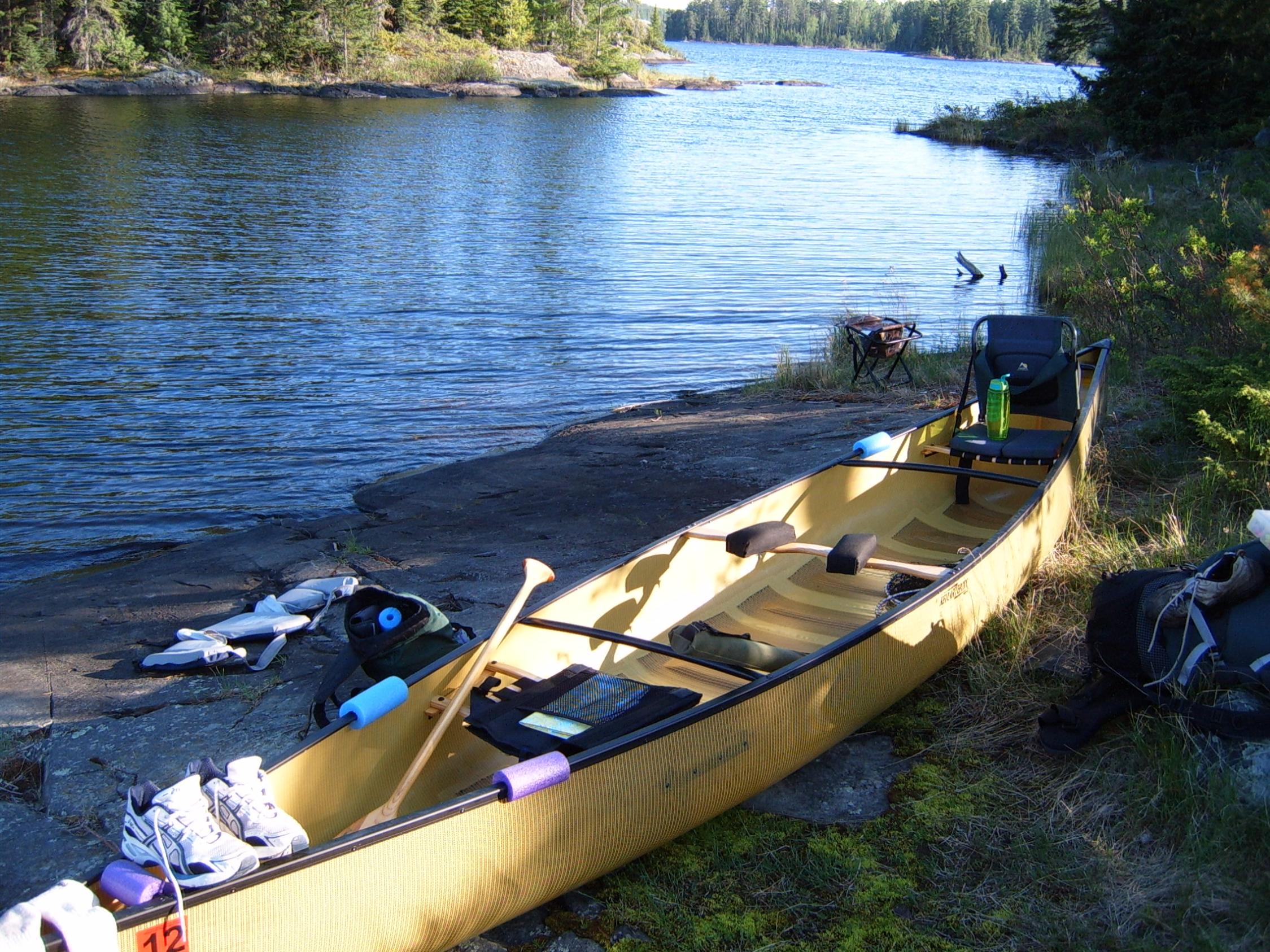 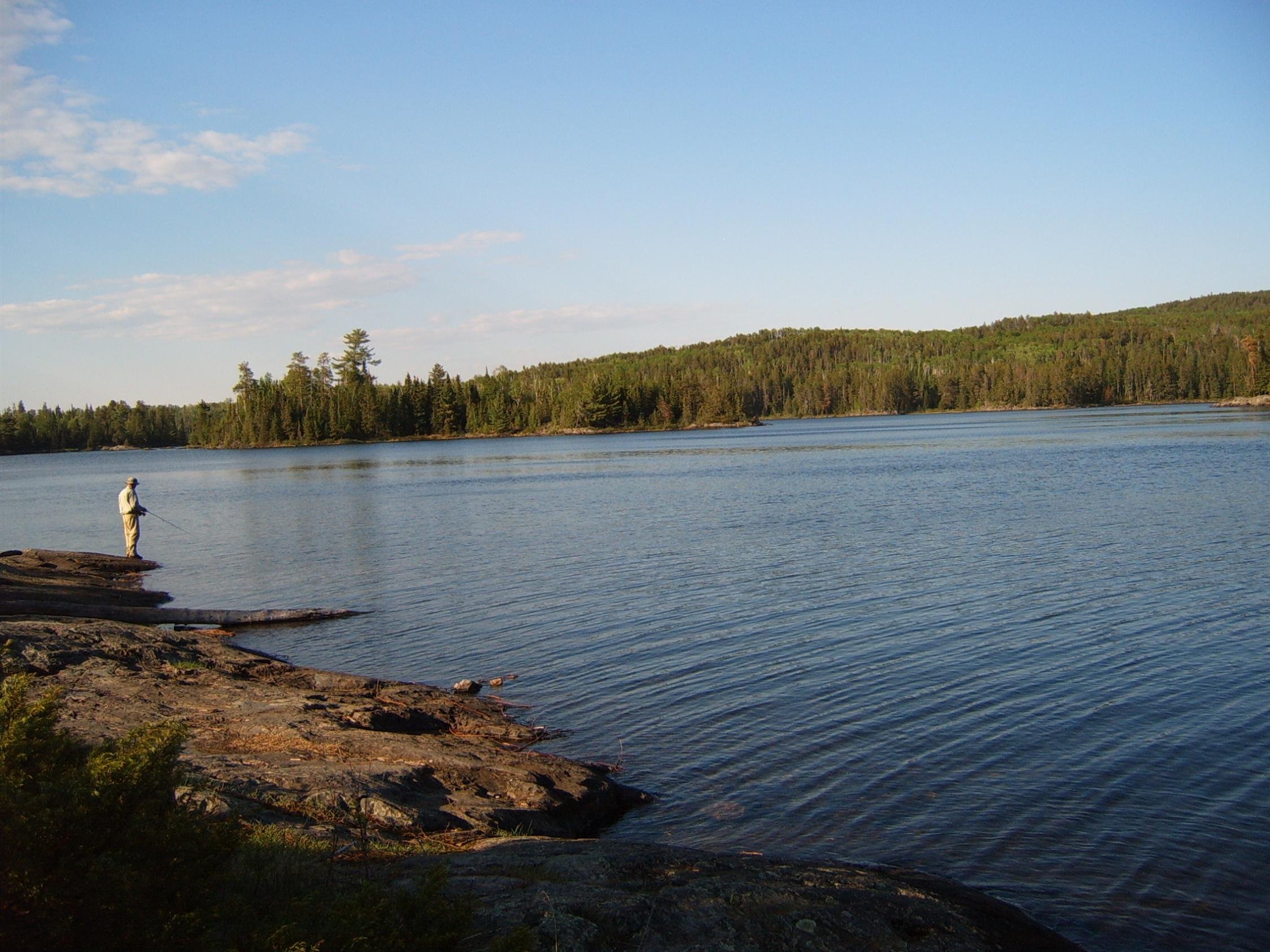 Time for bed. E goes to his Hennessey hammock. C, L and T share a Cabela’s version of the Timberline 6. J and K use a Eureka Tetragon 9. Everyone sleeps well.