Hanging out on Cirrus Lake, Quetico
by OldGreyGoose

Trip Type: Paddling Canoe
Entry Date: 09/02/2010
Entry & Exit Point: Quetico
Number of Days: 6
Group Size: 1
Trip Introduction:
I had made a few solo trips but none since 1997 when I was a little "younger" so I decided to try it one more (last?) time. The vague plan was to spend a few days on Cirrus then head down to western Quetico Lake for a few days and if possible meet up with Old Hoosier at Beaverhouse on the way out.
Discuss Trip: View Discussion Thread (15 messages)
Day 1 of 6
Thursday, September 02, 2010

Left Atikokan at 6:30AM in a gray mist. I had gotten my permit the previous afternoon and spent the night at the Quetico Inn, I think it’s called. (An OK one-nighter but certainly not Best Western.) Was not wearing my watch (!) so I’m not sure what time I arrived at Beaverhouse (BH), but I do know it took me until 10:10 to get to Cirrus Lake. (Note: This was the Thursday before Labor Day and there were only about eight vehicles at the parking lot and no one was coming or going.)

The water was low as it had been in June at the put-in but I had no trouble with my light load. (My gear consisted of my 16-foot Souris River, one small daypack, one fifty-pound plus Granite Gear Superior 1, two paddles, two rod/reels, a fanny pack and my PFD.) I made two trips on each portage, one wearing the fanny pack and PFD while carrying the canoe, the other with just the GG pack. Paddles and rods were bungeed to the canoe.

Paddling out of the BH creek mouth I got up a group of 6 or so ducks – teal, I think – which was a nice start. The BH to No-name portage was tough! I had some help with an energy drink, but I think I could have used a tumpline for my GG Superior 1 pack more. The half-mile trail is a good one but the initial climb from BH up to the leveling off was brutal, leaving me feeling older than my 66 years.

The no name is a neat little lake with a lot of character including an irregular shape, a small island and a small rock cliff near the Cirrus side. It deserves to have a name, in my opinion. By the way, if it’s your first trip through here as it was mine, if you aim to the left of the cliff you should hit the portage dead on.

The little No-name to Cirrus portage is short but twisty and very rooty and the shrubbery clutches and grabs the whole way. (Both these trails are surprisingly narrow for a busy area!) The “alternate ending” that someone described in the online portage database as a difficult 90-degree turn I found to be only about 60 degrees and fine for the 16-footer and me.

I entered Cirrus and held an easterly course along the south shore, point-to-point heading for the “point” campsite 2Z. (Along the way I moved a bald eagle off his perch a couple times and "chased" him down the lake.) While still west of the site I began to smell smoke and when I gained a view of the point, sure enough a party occupied it with two canoes pulled high out of the water. (It looked like there were two tents or tarps blue and green.)

I turned northeast across the lake to site 32, which was open, and I claimed it and set up. All of this was done enduring various forms of precipitation – dripping, drizzling, misting, etc. Wind had been from the east and northeast, but turned to the west around 3 PM, so I hoped the weather would be improving. Wrong.

I needed to collect a bag of water for tomorrow so I got my PDF and paddle and went to the canoe. Getting in (in about a foot of water) I slipped and fell against the side of the canoe pushing the gunwale below the water, letting several gallons of water in and soaking my left side. Great. When I got back with the water, getting out of the canoe I tore a hole in my rain pants. (I discovered a screw that the previous owner had put in the gunwale and barely penetrated the aluminum trim was the culprit.)

Around 5 PM I made a small fire with wood left in a neat “stash” under a flat rock and cooked a skillet full of hamburger, potato and onion. I ate right out of the skillet, so cleanup was a breeze.

Later I broke out a Backcountry cigar and some Evan Williams Honey Reserve flavored bourbon before hitting the Walrus tent about 8 PM as it was drizzling pretty good and there was thunder in the distance. (I love these September shorter days!) 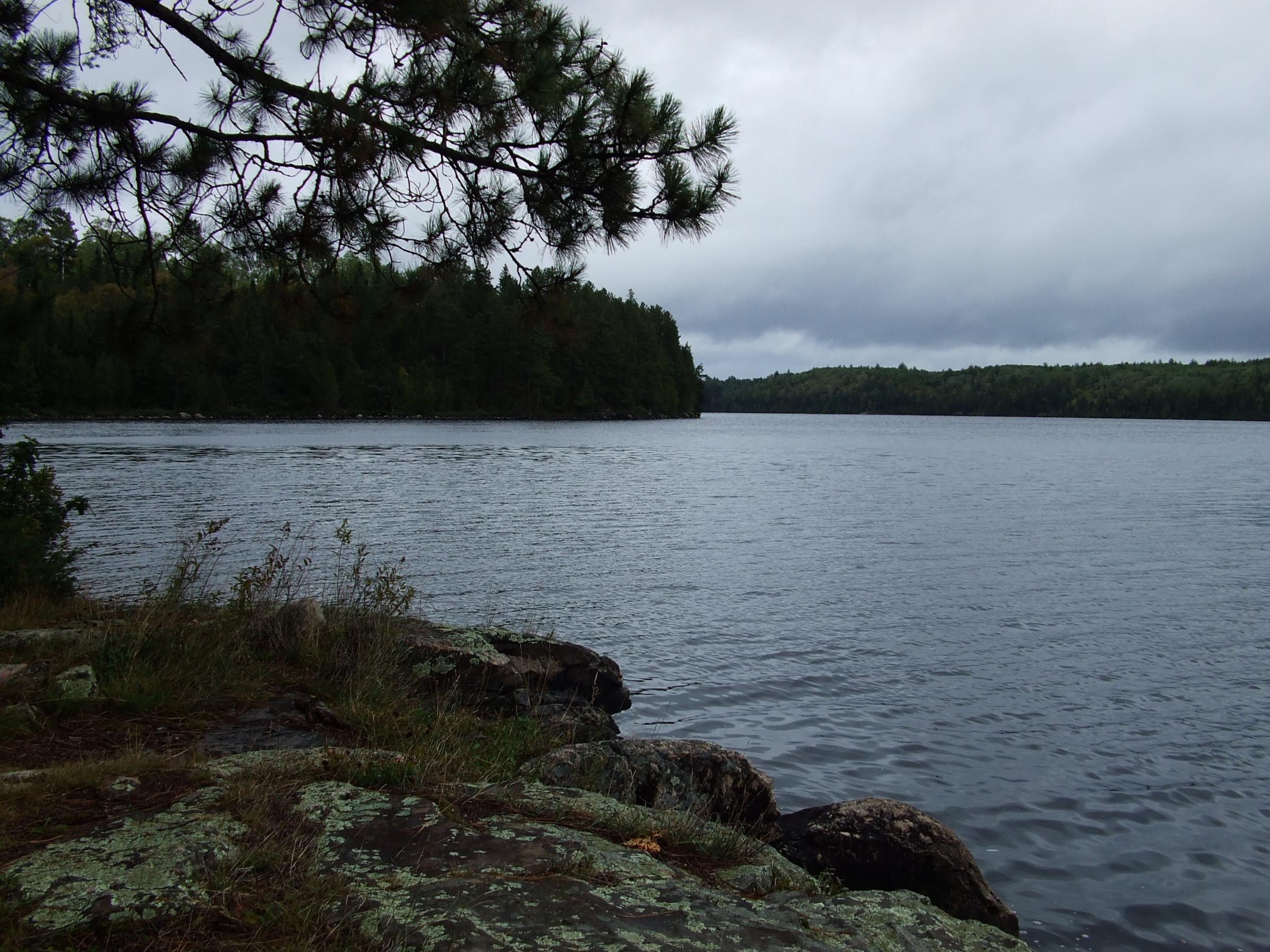 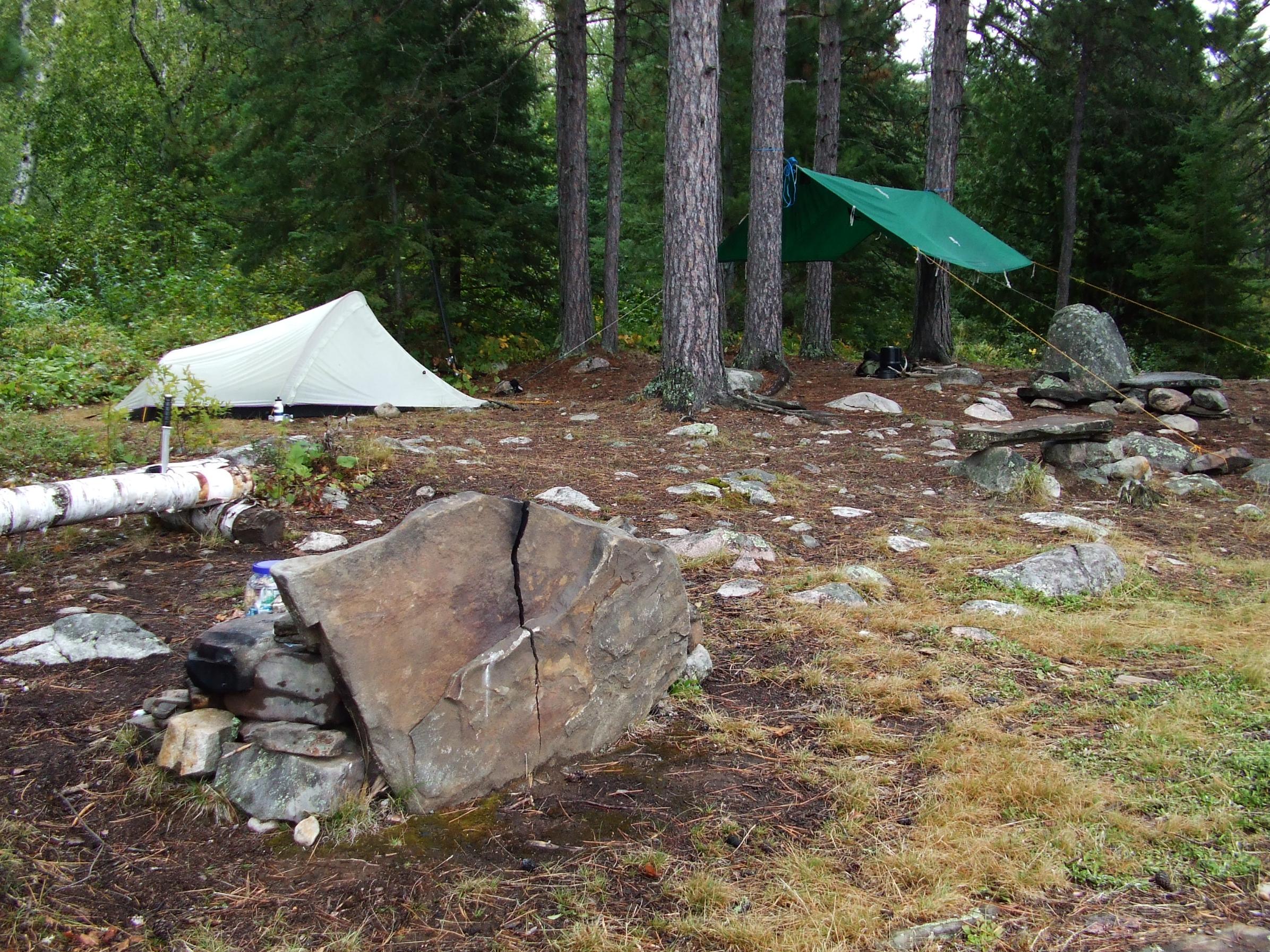 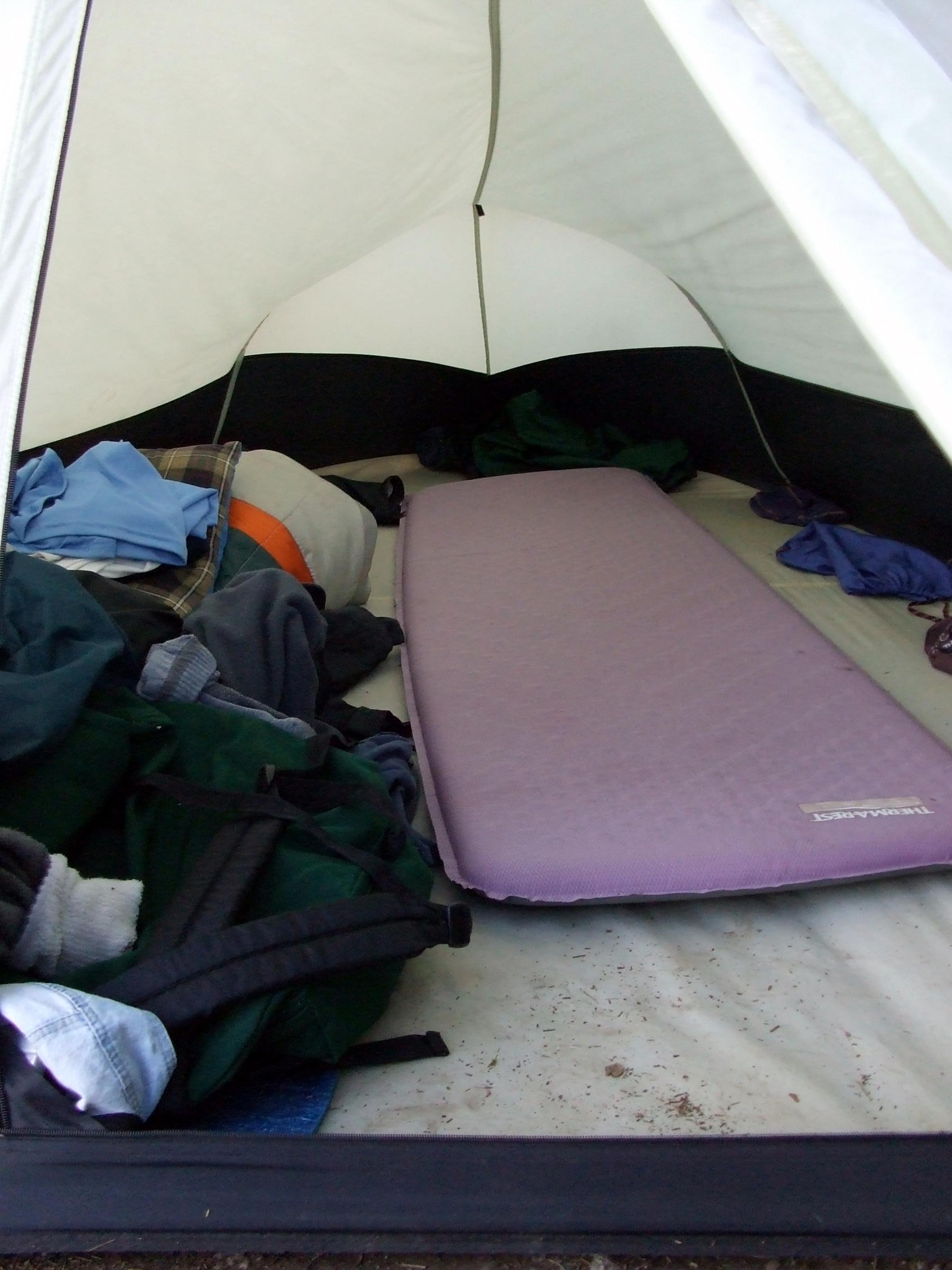