The 1st Big Trip
by RT

Trip Type: Paddling Canoe
Entry Date: 09/01/2006
Entry & Exit Point: Saganaga Lake Only (EP 55A)
Number of Days: 8
Group Size: 3
Trip Introduction:
After much talking about taking a trip into the BWCA, Matt, Gopher and I (RT) decided to finally take the plunge and go for it. A lot of online searching on my part led me to Seagull Outfitter at the end of the Gunflint Trail. I researched what we needed to bring, what we needed to rent and what to avoid, but no matter how much research I was able to do I was still unsure about the whole “canoe camping” thing. All of us loved to camp but being in the Boundary Waters Wilderness for a long period of time (I had done weekend trips to the End of the Trail campground with my parents before and some small solo excursions onto the Superior Hiking Trail system) was something that was new, exciting and a little bit scary all at the same time.
Discuss Trip: View Discussion Thread (9 messages)
Day 1 of 8
Friday, September 01, 2006

We awoke at Gopher’s apartment in Duluth early in the morning planning on getting to Seagull Outfitters at the end of the Gunflint Trail as early as we could. We wanted to be on the water and into a site before they were all taken. We loaded up my car and crammed into it before heading to McDonald’s for an “on the road” breakfast.

The drive up the North Shore was fantastic and we made a small stop (for gas and last minute supplies – candy bars and Mountain Dew) at the Holiday station in Grand Marais before driving up the Gunflint Trail. It had been many years for me and I was surprised at how much I had forgotten. The road was just as twisty as I remembered but seemed so much shorter. The 56-mile length seemed to fly by as we all talked excitedly about the forthcoming trip.

This was Gopher and Matt’s first time up the Gunflint and they both seemed impressed at the landscape. While both had been up Highway 61 (all the way to Canada) before, this was a different beast altogether. Small offshoot roads, mailboxes to unseen cabins, Ugly Baby Bait and the Windigo Bar all seemed to be out of place in our modern society. You feel like you are stepping back to a time that none of us know. The entire drive felt like those Colman Camping commercials that you see on TV of families from the 1960’s taking their vacations. Both Gopher and Matt seemed to be excited and a little bit trepidatious about being this far from civilization.

We arrived at Seagull Outfitters at about noon on Friday where we signed our permit paperwork and picked up our canoe; a Wenonah Minnesota 3. We each had our own backpacking packs and had already repackaged our food in my old Coast Guard Sea-bag so the only thing was to get “the talk” about camping in the wilderness and to set off. Debbie, the owner of Seagull Outfitters wished us well before we loaded up into one of their visitor transport trucks (an old Chevy Suburban) and headed to the put-in spot.

We put in at the boat landing for Saganaga Lake (which is about a quarter mile South of the Saganaga EP #55), loaded the packs into the canoe in the most logical way would could figure, and struck off for our first “Big Trip” into the BWCA. None of us were ready for the tipsiness of a Kevlar Canoe! I was in the bow, Matt took the jump seat and Gopher manned the stern. Unstable is the word! We rocked, we rolled, we damn near dumped before we found out (which took about an hour) how to sit and how to maintain balance in the canoe. Interesting ride, I must admit.

After an hour of paddling and figuring out how this canoe worked we reached the narrows before heading into Big Sag proper. Motorboats passed us and, while they slowed down (causing fewer wakes for canoeists) we had a hard time with the balance of the canoe. It felt like we were going to dump every time even the smallest wave passed us. I, being in the bow, took the brunt a little bit more than Matt and Gopher. I felt unstable the entire time we were in the boat; the motion being enhanced by the narrowness of the bow of the canoe.

We made it through just fine however and when we finally got onto Big Sag the waters were almost calm as glass. I had stars in my eyes when I saw how untouched the land was. Pristine waters, pristine islands; it was amazing. We slowly paddled by Clark Island before island hopping to Munker Island, where we decided that we would spend our first night. We set up camp, ate dinner (we brought MRE’s that we picked up in Minneapolis) and enjoyed the stars while talking into the night. 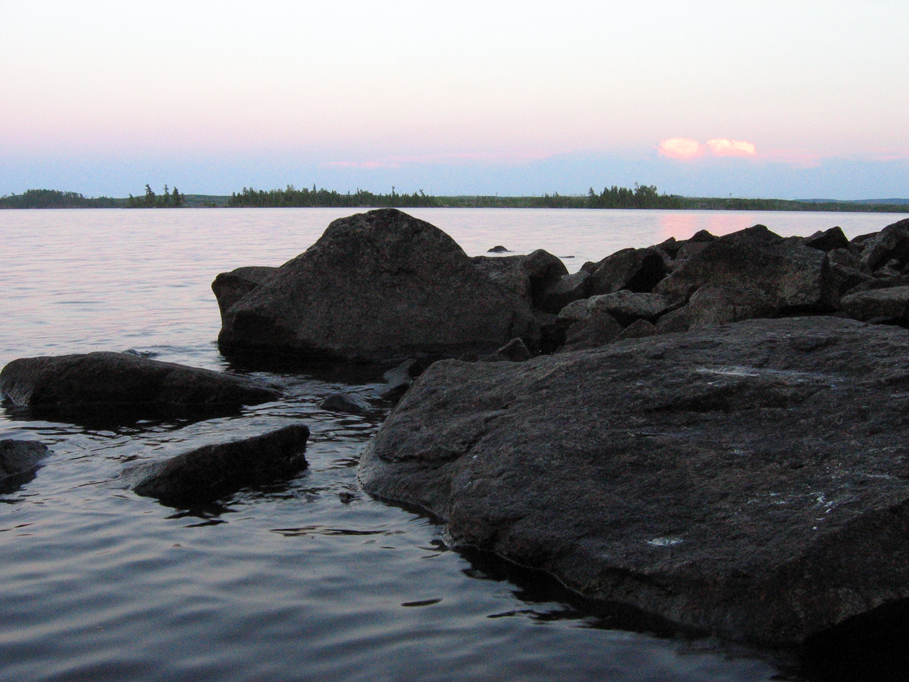 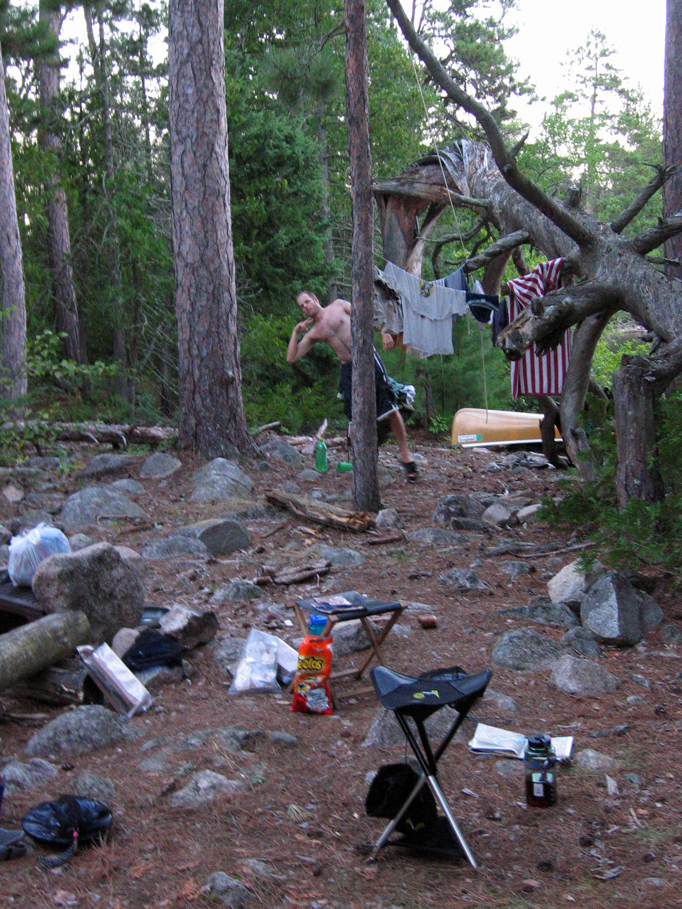