The Year of Rain
by RT

We were on the road by 5:30am the next morning but decided to skip on breakfast in Duluth (since, because of Gopher’s house location it would be out of our way) and instead hit up McDonald’s in Two Harbors. We talked all the way up of trivial things and what each of our goals was during this trip; I wanted to make it back to Wisini Lake to camp on the site we passed the ear before; Gopher and Matt were just looking to get out and relax.

We rolled into Grand Marais a little before 9am and made our standard stop at the Holiday gas station (once again, to fill up the tank and to grab that last minute Mountain Dew and candy bar) before heading up the Gunflint Trail to Seagull Outfitters. Again, as always, the drive went exceedingly fast and we arrived at the outfitter just before 10am where we got all of our paperwork (permits) in order. We loaded our gear, canoe and kayak into the trailer of the beat-up Seagull Suburban truck, said ‘goodbye’ to Debbie and made our way into the BWCA once again.

Gopher wanted to get as far away from people as soon as he could so we opted, like the year before, for the tow-boat ride to Hook Island on Big Saganaga Lake. The ride went quickly and we were soon dropped off with all of our gear. The sky, however, was not ready for us and it decided to be overcast and cool. As long as it was not raining we were happy and we soon loaded up the canoe and kayak with all of our gear (setting down a tarp and wrapping all of our backpacks, making a “tarp taco”, to keep the rain from soaking our sleeping bags and tents.)

We made quick work of the rest of Big Sag and Swamp Lakes before once again arriving at Monument Portage. We unloaded our gear and I made Gopher and Matt pose at one of the boarder markers for our standard “cheesy” group pictures before we continued the portage. Once our first portage was complete we pushed off on Ottertrack Lake, our destination was to be the group of campsites on a small spit of land between Ottertrack and Knife Lake.

The weather did not know what it wanted to do. The clouds were sporadic. It would sprinkle for a bit then become sunny before turning and sprinkle some more. It never rained enough for us to put on our rain gear, though, so we paid it no mind. The wind was thankfully nonexistent and our trek down Ottertrack Lake was calm and smooth.

Traveling down the Canadian side of the lake we happily yammered back and forth (Gopher and I in the canoe, Matt in the kayak) as we cruised by the towering cliffs. We stopped by the plaque dedicated to “Ben Ambrose” (which we failed to notice the year before) and took some pictures.

Following along the Canadian / U.S. boarder are small bronze (spray painted silver for visibility) markers that have been cemented into the rock; presumably as an aid to navigation. Gopher, seeing these for the past couple of BWCA trips, decided that he wanted one. Matt and I just laughed, (the year before Gopher tried getting one by bashing it with a very large rock only to have the rock break) because there would be no way to get one out of the rock.

The first marker that we encountered was on a large rock at a narrow right-hand turn on Ottertrack Lake. The markers are very easy to spot if you know what you are looking for, so we quickly made our way up to the rock. We pulled up and Gopher was scoping out the marker as I grabbed food for lunch and Matt cast a few lines to see what he could catch. I laughed and took pictures of Gopher as he inspected the marker and tried to pull it out of the rock.

Our food eaten, and Gopher’s hopes dashed, we pushed off once again for our destination. The sky decided that it wanted to be somewhat nice and the sprinkly rain quit for the rest of the day. Which was very welcome; no one likes to travel, especially in a canoe, while it is raining. We made quick work of the rest of Ottertrack Lake and made our first camp (the site that we had the Pine Martin sighting during our 2007 trip) by mid afternoon.

Since it was early in the day we slowly set up camp, getting the tents set up after I had put up a tarp shelter. We tried our luck at fishing (hoping some of the tips Donnie had shown us the year before did not go forgotten) before cooking up some noodles and rice, eating some snacks, and smoking some cigars (Backwoods) and just relaxing by the fire (no fire ban this year) for the rest of the evening.

We stayed up very late. I had planned the trip according to the moon phases this year because I wanted to see the stars. When the clouds were nice enough to break every now and then we could see into oblivion. We only had sneaking glances though. The weather apparently did not want us to sit on the shore staring into nothing. 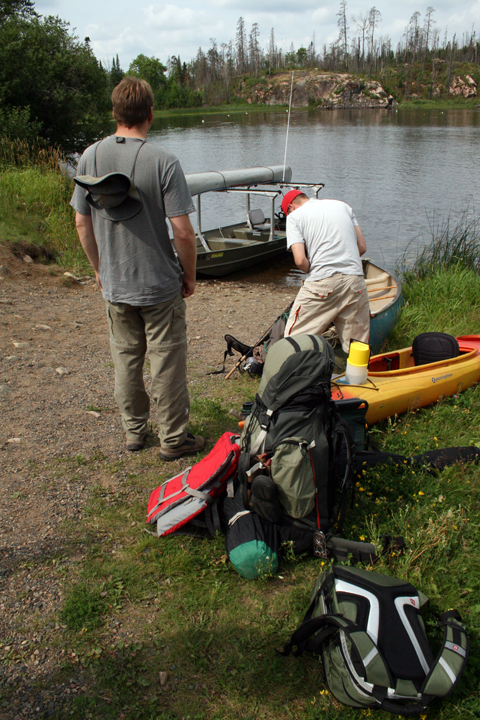 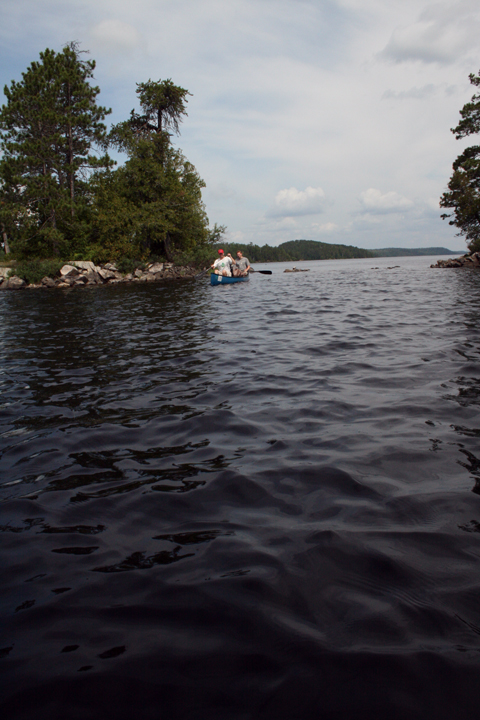 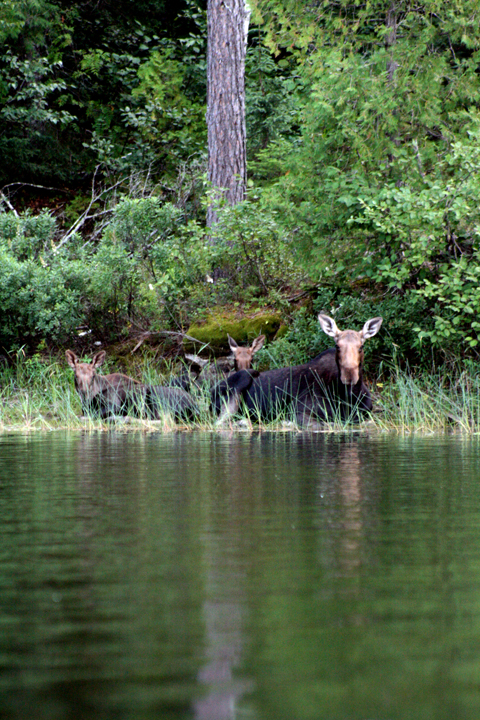