Trip Type: Snowshoeing
Entry Date: 01/20/2011
Entry & Exit Point: Pine Lake (EP 68)
Number of Days: 4
Group Size: 5
Trip Introduction:
The variables of this trip were a work in progress right up until we finally departed. How many, who & for how long were not established in time to properly plan the trip. The 5 of us who did end up going all had some winter camping experience. But none of us had ever done an overnight winter wilderness trip. Never the less we still felt we were adequately prepared..........
Discuss Trip: View Discussion Thread (13 messages)
Day 1 of 4
Thursday, January 20, 2011

Originally this was to be our entry date. But unavoidable circumstances pushed us back a day. So our 5 man crew (Mark, his brother Keith, John, Scott & myself) met up at Marks' place in Gilbert this day. It was suggested that the 5 of us could all fit into Scotts' truck, thus saving on gas. Being about 6'2 I didn't like the sounds of that so I quickly volunteered to drive my van as well. I'm not sure we would've gotten all the gear in Scotts' truck anyways? So we finished packing up both vehicles & headed off towards Grand Marais.

The roads weren't in optimal conditions as there was some snow blowing around on the way up. The wind reallly started "howling" once we hit highway 61. But the drive went off without incident. Albeit a bit longer (time wise) than we'd hoped.
We checked into our hotel rooms then made tracks to Sven & Oles' for some pizza and a few beers. While seated inside it was impossible not to notice the wind violently swaying the street lights just outside. Scott tried to check on the weather on his cell phone but there was a trivia contest in progress and WI-FI connections were blocked until it was over. One of the locals told us it was supposed to be -35 below with 30+ mph winds in Grand Marais tonight. Hmmmmmm. Maybe it was a good thing our trip got pushed back a day? 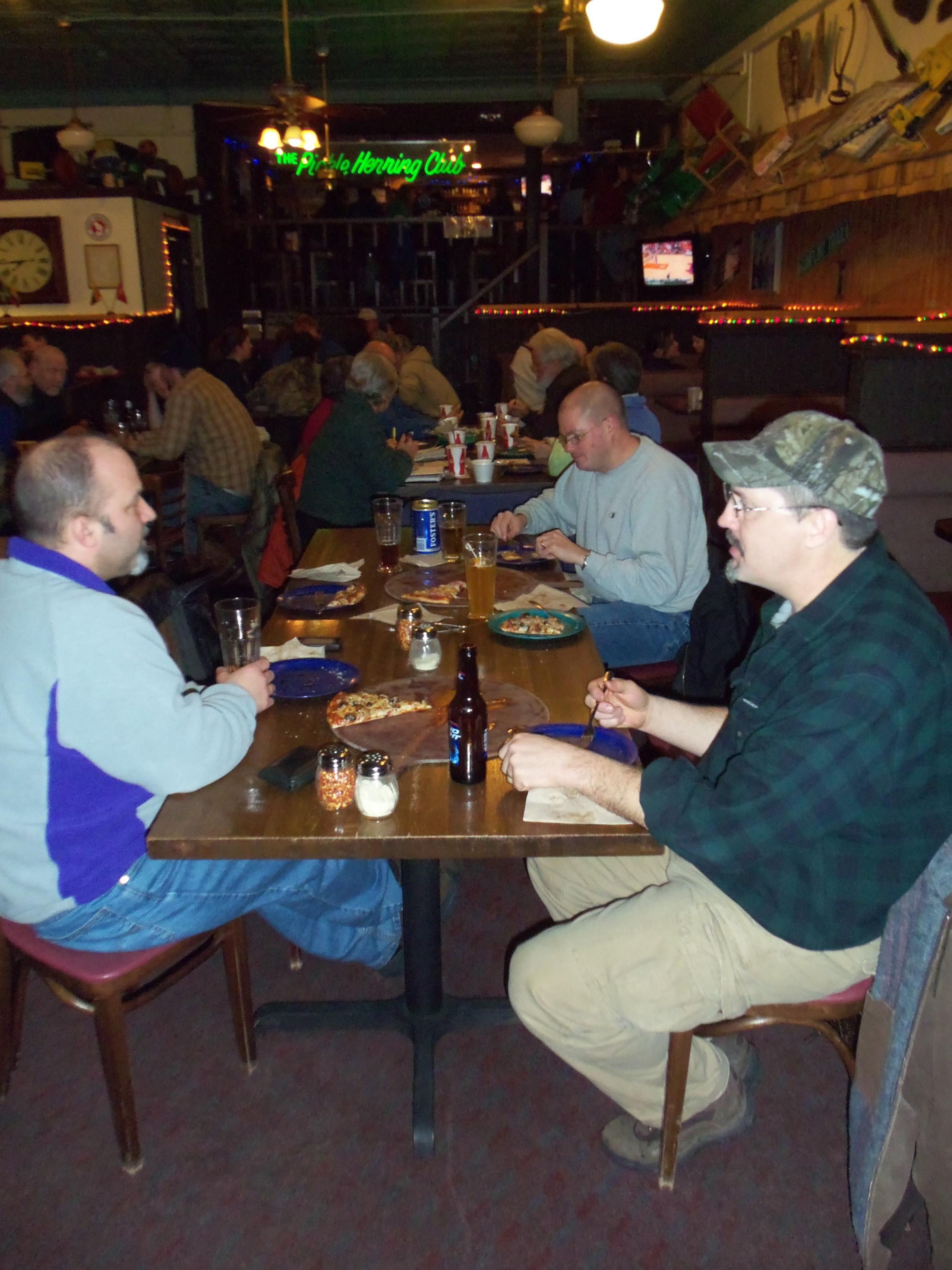 We packed away 3 large pizzas between the 5 of us. Plus a few beers apeice. Witnessing the maelstrom currently wreaking havoc outside. We all whole-heartedly agreed that it was fortuitous our trip got pushed back. There was some discussion wondering if we should cancel the trip altogether. But the general consensus was to proceed as long as the winds died down.
We went back to our hotel rooms and immediately checked the weather channel. The forecast called for the winds to calm by 10:00 the next morning and was not to be much of a factor for the next few days. The overnight lows for the next 2 nights were -8 and -2 respectively. MUCH more manageable temps. This set everyones minds a bit more at ease. After this stimulating news, I believe everyone else headed for the comfort of the hot tub? I remained in the room and watched a little Dual Survival on TV from my bed.